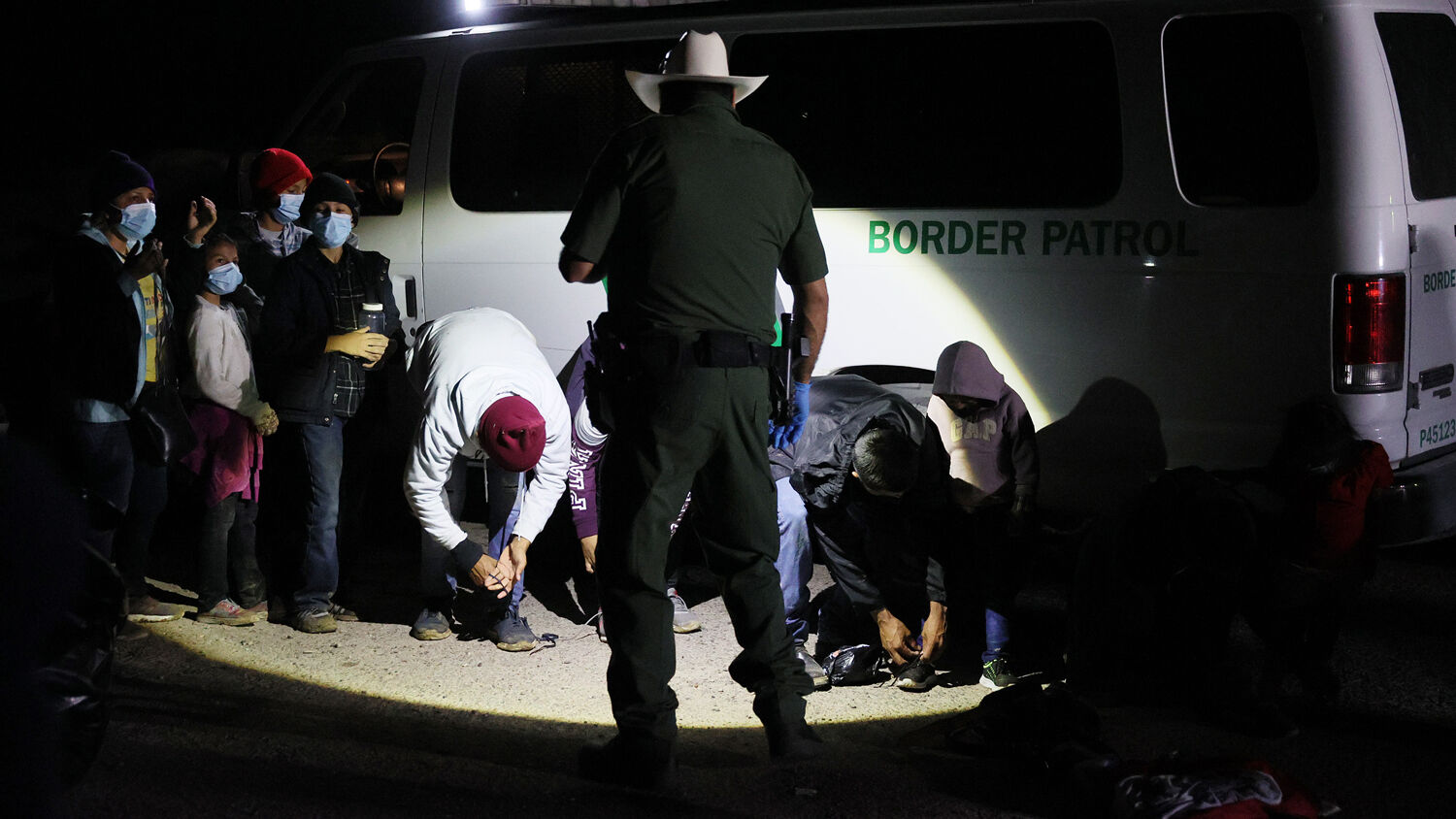 A group of migrants is processed by U.S. Border Patrol agents after arriving from Mexico on March 30 in Roma, Texas.
Joe Raedle/Getty Images

Terrorists are already exploiting the anarchy on America’s southern border.

Roughly 82 percent of these illegal aliens are from El Salvador, Guatemala, Honduras and Mexico. Yet in remote Val Verde County, Texas, migrants from far-flung places like Africa, Haiti, Uzbekistan and Venezuela have been apprehended at the border. Tiffany Burrow, director of the Val Verde Border Humanitarian Coalition, says they have “never seen numbers like this.” Before Biden took the oath of office, her group was assisting about 25 people per day. As of last week, they were assisting an all-time high of about 300 per day.

This number of illegal aliens from the Eastern Hemisphere is concerning since the Iran-backed terrorist group Hezbollah has been smuggling drugs and weapons into the U.S. for more than a decade. “Crime is a core component of Hezbollah’s fundraising,” wrote Emanuele Ottolenghi, a senior fellow at the Foundation for Defense of Democracies. “Open-source studies suggest that involvement in illicit activities generates roughly 30 percent of Hezbollah’s annual operating budget of roughly $1 billion, and that Iran provides the rest. But a closer look at Hezbollah’s narco trafficking operations suggests its proceeds from criminal activity may far exceed prevailing estimates. The Ayman Joumaa network, which the dea [Drug Enforcement Administration] exposed in 2011 and the Treasury Department linked to Hezbollah in 2012, was laundering up to $200 million a month for Mexican and Colombian cartels. Joumaa, according to the dea, took a hefty commission for his services—between 8 percent and 14 percent, or between $16 million and $28 million per month.”

This means the Biden administration’s open-door policies are presenting terrorist organizations with a huge opportunity to raise money and potentially conduct terrorist attacks in the United States. Yet no one in the Biden administration seems to care. When nbc anchor Lester Holt asked Vice President Kamala Harris why she has not visited the southern border in the 11 weeks since Joe Biden put her in charge of handling the immigration crisis, she remarked that she has not been to Europe either and did not understand the question.

Many Border Patrol agents blame the current crisis on the Biden administration’s liberal border policies. “I can confidently say that President Biden owns this crisis. It is his fault,” said Judd Law president of the National Border Patrol Council, the labor union that represents three quarters of the roughly 20,000 Border Patrol agents. Fox News host Jesse Watters believes the main reason Democrats are allowing illegal immigrants to flood into the U.S. is to turn Texas into a Democratic stronghold by the 2024 presidential election. If this is true, then Democrats are winking as terrorists and drug cartel agents cross the border in return for political gain.

Dozens of Bible verses promise blessings to Israel for obedience to God’s law and warn of curses for disobedience. The late Herbert W. Armstrong explained in his book The United States and Britain in Prophecy that these verses apply to the U.S. and Britain. In one prophecy, God likens Israel to a hedged vineyard, protected on all sides. The United States has been hedged north, south, east and west by nonthreatening nations and geographic fortifications. But because of the sins of the people, God warns, “I will tell you what I will do to my vineyard: I will take away the hedge thereof, and it shall be eaten up; and break down the wall thereof, and it shall be trodden down” (Isaiah 5:5).

In 1979, the Trumpet’s parent magazine, the Plain Truth, identified Fidel Castro’s 1959 revolution in Cuba as the first breach in America’s protective hedge. And there have been many breaches since then. Under the current presidential administration, the protective hedge on America’s southern border has been almost completely torn down.

“It is time for the American people to wake up!” wrote Trumpet editor in chief Gerald Flurry in his article “Communism in America Today.” “Or is it already too late? The Prophet Hosea says that we allow ourselves ‘to be mixed up with foreigners. … Foreigners eat away his strength unknown to him’ (Hosea 7:8-9; Moffatt translation). Foreigners are eating away America’s strength, yet we don’t even realize it because we have forsaken God. It is amazing how few people will really talk about what is happening. Our people are sick in their reasoning and are faint of heart (Isaiah 1:5). When they see something fearsome, they are afraid to face it!”

Media reports describe the fearsome surge of migrants pouring across the border, but America’s leaders refuse to do anything about it. So the flood of unvetted foreigners will continue!