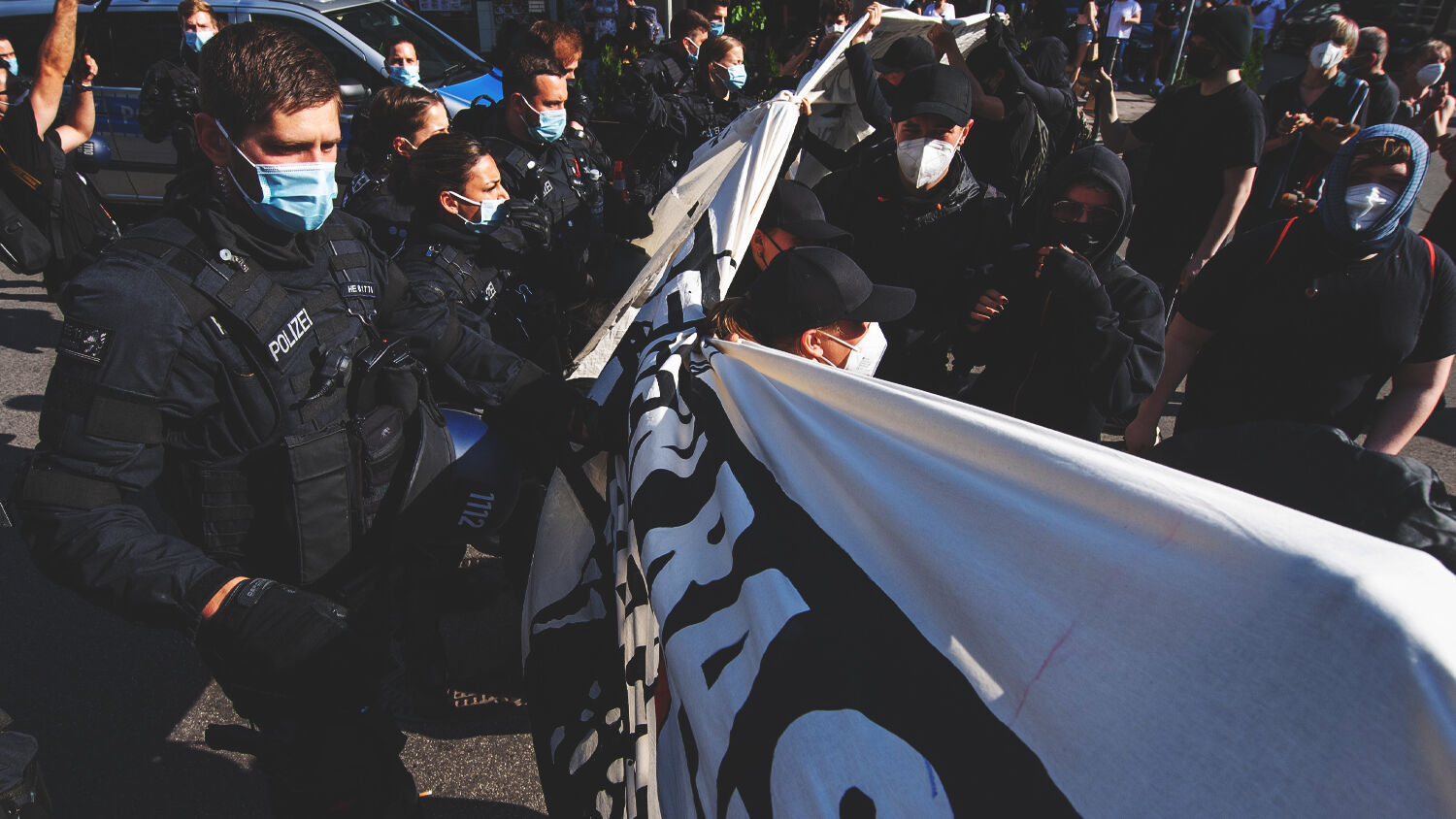 After the disbandment of the Frankfurt special task force (SEK), left-wing alliances demonstrate in downtown Frankfurt against right-wing structures within the police on June 11, 2021 in Hessen, Frankfurt.
Boris Roessler/picture alliance/Getty Images

Why can’t Germany overcome its Nazi past?

Frankfurt’s Special Task Force (sek) will be disbanded due to right-wing extremism, Hesse Interior Minister Peter Beuth announced June 10. The “unacceptable misconduct” made the disbanding of the unit “unavoidable,” he said, after a report exposed far-right online chats among police officers. This shouldn’t be surprising: The elite units of both police and army have been proved to have a problem with right-wing extremism.

The public prosecutor’s office in Frankfurt and the Hessian State Criminal Police Office are investigating 19 active-duty police officers and one former officer who allegedly participated in right-wing extremist chats. The existence of the chats had become known in 2018.

The special task force of the Frankfurt police headquarters is meant to be an example that others aspire to follow. But the higher one goes in Germany’s police forces or army, the more extremists one finds. As faz.net noted (Trumpet translation throughout):

The fact that this time it is officers of the special task force who are affected makes no difference in terms of criminal law, but symbolically it does. After all, the special unit is considered the supreme discipline. In their missions, which range from hostage-taking to terrorism, the officers are not only physically challenged. It goes without saying that they are also expected to have a high level of integrity. This image has been shaken. The fact that 20 officers from the unit have been removed from duty overnight in one fell swoop has torn a huge hole in the laboriously built anti-terror security structure. It will be difficult to fill it, even though Police Commissioner Gerhard Bereswill has certainly taken the right steps.

Last year, it was the German Army’s Special Forces, the ksk, that was revealed to house many neo-Nazis. Defense Minister Annegret Kramp-Karrenbauer disbanded the ksk’s 2nd Company for that reason. The proportionally smaller number of soldiers in the unit and the high number of extremist cases makes the ksk a “hotbed of the far right,” according to the German military intelligence service (mad). The mad itself is accused of having been far too lenient in its past investigations. Since the fall of the Berlin Wall in 1989, more and more right-wing extremist cases have been reported. After the Berlin Wall fell, there was an explosion in far-right violence.

Hesse state, where the financial hub of Frankfurt is located, has been a particular hotspot of right-wing activity among German authorities.

Threatening e-mails sent to several people, including a prominent lawyer with a migrant background, were traced back to a police computer in Frankfurt. The messages were signed nsu 2.0—a reference to the neo-Nazi trio National Socialist Underground (nsu) who committed 10 murders between 2000 and 2007.

It was also in Hesse, two years ago, where pro-migrant politician Walter Lübcke was shot and killed in his garden by a right-wing extremist. The fact that Hesse in particular has a problem with far-right extremism is particularly interesting in regards to Bible history and prophecy. Our booklet Germany and the Holy Roman Empire states:

Much was written about the early German tribes that poured into Europe during the first and second centuries a.d., thanks in large part to the Roman historian Tacitus, who lived at that time. Among the most significant of these early German tribes are the Chatti (ancestors of the modern Hessians), Treveri, Tungri and the Alammanni, to name just a few. Chatti means “to break down by violence; to make afraid or terrify.” The ancestors of this German tribe, before migrating, lived mostly in Asia Minor, and were called the Assyrian Chatti.

The Bible reveals many prophecies that refer to Assyria, modern Germany, that are to be fulfilled in our day. In Isaiah 37:18 we read: “Of a truth, Lord, the kings of Assyria have laid waste all the nations, and their countries.”

The New Testament speaks of this same nation and prophesies of another war to come. The Apostle John saw its military power symbolized by a beast in a prophetic vision: “The beast that thou sawest was, and is not; and shall ascend out of the bottomless pit, and go into perdition: and they that dwell on the earth shall wonder, whose names were not written in the book of life from the foundation of the world, when they behold the beast that was, and is not, and yet is. … And there are seven kings: five are fallen, and one is, and the other is not yet come; and when he cometh, he must continue a short space” (Revelation 17:8, 10).

Here we also see that this empire rose to cause great havoc, went underground and is about to rise again. It has been widely documented how Heinrich Himmler instructed a Nazi movement to go underground. Washington Daily World noted: “Gestapo Chief Heinrich Himmler and a powerful clique of Nazi leaders are organizing an underground movement to keep the party alive after Germany’s defeat and lay the groundwork for another attempt at world conquest, usually reliable sources said today …” (Oct. 29, 1943).

Herbert W. Armstrong warned: “We don’t understand German thoroughness. From the very start of World War ii, they have considered the possibility of losing this second round, as they did the first—and they have carefully, methodically planned, in such eventuality, the third round—World War iii!”

By commanding the SS, Himmler helped orchestrate the Holocaust and create a police state that is infamous to this day. In 1943, he “also gained control of the intelligence network, military armaments (after the abortive attempt on Hitler’s life of July 20, 1944), the Volkssturm (‘People’s Storm Troop’), a mass levy of mostly older men, and later the Werwolf, a guerrilla force intended to continue the struggle after the war,” Britannica.com noted.

And there are plenty of indications that indicate that the plan “to continue the struggle after the war” succeeded. Director of the Bavarian Radio Network, Wilhelm von Cube, “proved in a detailed analysis that no fewer than 85 percent of the leading officials in the Bonn Foreign Office had been Nazi Party members and had served the Hitler cause” (T. H. Tetens, The New Germany and the Old Nazis). Germany’s first chancellor, Konrad Adenauer, admitted in the Bundestag debate of Oct. 23, 1952, that 66 percent of the high-ranking diplomats were former Nazis. When the Bundeswehr was founded, about 80 percent of its officers had fought as part of the Wehrmacht in World War ii.

It is therefore unsurprising that Nazi mentalities continued to flourish in police offices decades after the war. In Germany’s Conquest of the Balkans, Trumpet editor in chief Gerald Flurry goes through extensive documented evidence that reveals just how the Nazis went underground and how they plan to reemerge.

For decades this reality has been ignored. Now is the time to wake up and watch where these extremist mentalities will lead. To start, I encourage you to read “Why Does Germany Have So Many Neo-Nazi Conspiracies?”