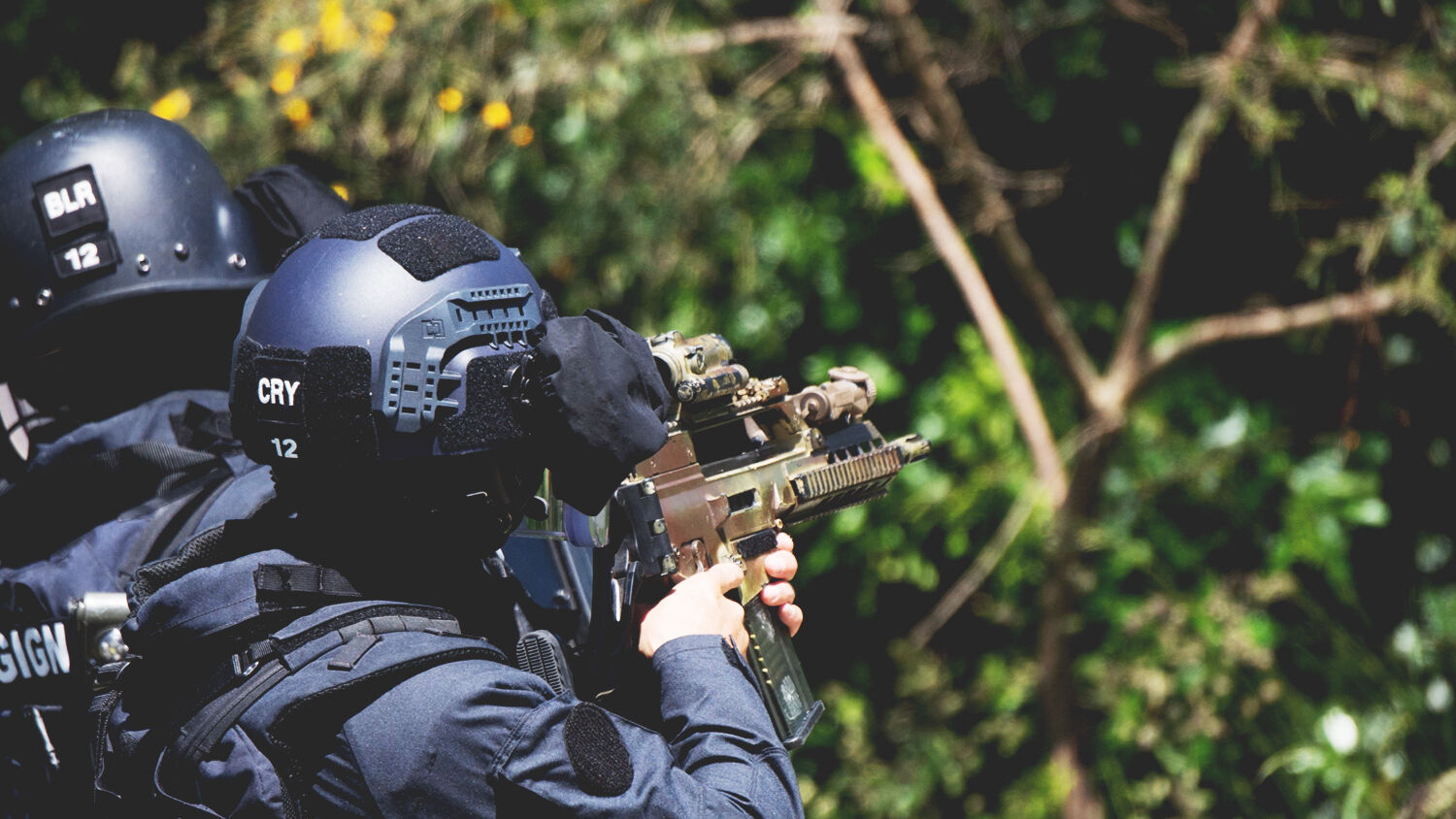 French police pursue a suspect in a knife attack that badly wounded a female officer in La Chapelle-sur-Erdre, near Nantes, on May 28, 2021.
LOIC VENANCE/AFP/Getty Images

A French citizen who converted to radical Islam stabbed a police officer in La Chapelle-sur-Erdre, France, on May 28, before fleeing in a stolen vehicle, taking a hostage, and engaging in a shootout with police. The suspect was known to police and on a terror watch list. The latest attack comes after the killing of a police officer at Rambouillet last month. Faced with continual attacks on the forces of order, support for harsher policies on radical Islam is increasing.

The suspect was born in France and known to police for armed robbery and kidnapping, as well as being on the Reporting File for the Prevention of Terrorist Radicalization, a government watchlist for those who have known radical tendencies. He was a repeat offender, having come before a court 19 times. Radicalized in 2016, around the time of his second jail sentence, he had adopted “a rigorous practice of religion,” according to French media.

The May 28 attack began mid-morning. The 39-year-old suspect entered the municipal police station in Chapelle-sur-Erdre, near the city of Nantes, claiming to have car trouble. He then stabbed a 47-year-old female police officer, injuring her in the legs, arms and hands, and took her firearm. When another police officer at the scene tried to intervene, the suspect attempted to stab him as well. However, his bulletproof vest prevented the assailant from doing any harm.

Fleeing the scene, the attacker stole a vehicle. He crashed a short time later, and then entered an apartment building. There, he took a young woman hostage for two and a half hours. Firing from the balcony, he lightly injured two police officers. The attacker then left the building to fire at officers from closer range, and was killed in another exchange of bullets.

Officially, the investigation has focused on the suspect’s schizophrenia diagnosis as a cause for his actions, rather than any extremist motive. Investigators have already stated they are unlikely to pursue an investigation for terrorism.

Yet there is reason to doubt the honesty of this approach.

The day after the attack, May 29, the suspect’s former lawyer was interviewed on bfmtv. He noted that in 2015, when the attacker was in court for aggravated theft and kidnapping, “the psychological or psychiatric aspect of the occurrences absolutely did not come out” in the evidence (Trumpet translation throughout). There was “no danger in the psychiatric sense of the term” and “nobody argued that there was a problem of altered or lacking perception” on the part of the suspect. This is why the suspect was given the longest penalty possible for his crimes in 2015.

The lawyer stated that if such a change did occur in the suspect’s mind, it would have had to have “emerged later.” This would have been after 2015, and possibly around or after the time the suspect radicalized.

Political opponents took the opportunity to question government policy on radical Islam. Marine le Pen, leader of the Rassemblement National party (National Rally), stated, “How was an individual known for radicalization, known for having wanted to lash out at police officers, able to be outside, free to do harm? The government must now find solutions to this intolerable situation.”

Official investigations often avoid labelling an incident as terrorism-related, when they can get away with it. However, with each new attack on the forces of order, reality becomes more apparent. This turns people against those leaders who willingly ignore the issue. It also boosts the popularity of leaders like Marine le Pen, who, for the first time, poses a credible threat to Macron in the next national election.

The fact that the attacker was born in France and radicalized without leaving the country poses an extra challenge for law enforcement. This shows that reducing the flow of migrants entering France may not be enough to combat radical Islam, since there are already a sizable number of radicalized individuals inside the country who spread their beliefs to others. Also, radical Islamic content is readily available online.

Because of this, stricter laws are being contemplated. One of them went so far as to propose jailing everyone on France’s terror watch list and even expelling foreigners who are found on the list.

This may sound harsh, but support for dramatic and decisive action against radical Islam is growing.

In April, an open letter signed by thousands of French police, gendarmes and military personnel was addressed to President Emmanuel Macron. It warned of a “civil war” unless the threat of radical Islam was contained.

As Trumpet contributor Josué Michels noted at the time, extreme views on immigration and Islam are being tolerated more and more in France. Historically, opposition to Islam has always been the rule, not the exception in Europe. Ancient leaders of the French people, such as Charles Martel and Charlemagne, are examples of this. Under them, and with the influence of the Catholic Church, Europe developed into a Christian continent.

For many years, the Trumpet has been predicting that strong leaders will return to Europe, including France. Bible prophecy states that Europe will become more hostile toward radical Islam. One of these prophecies is found in Daniel 11:40: “And at the time of the end shall the king of the south push at him: and the king of the north shall come against him like a whirlwind, with chariots, and with horsemen, and with many ships; and he shall enter into the countries, and shall overflow and pass over.”

In The King of the South, Trumpet editor in chief Gerald Flurry writes, “This scripture describes a time when Germany’s Catholic empire will wage all-out war, throwing everything it has at radical Islam—and dominating it like a violent flood pouring in!”

With each new attack on French society and the forces of order, the French move closer to being part of this prophecy. There are still many in France who want to coexist peacefully with Islam. But prophecy warns that this will not happen. To learn more about why Europe and Islam are headed for conflict, read Mr. Flurry’s free booklet The King of the South.