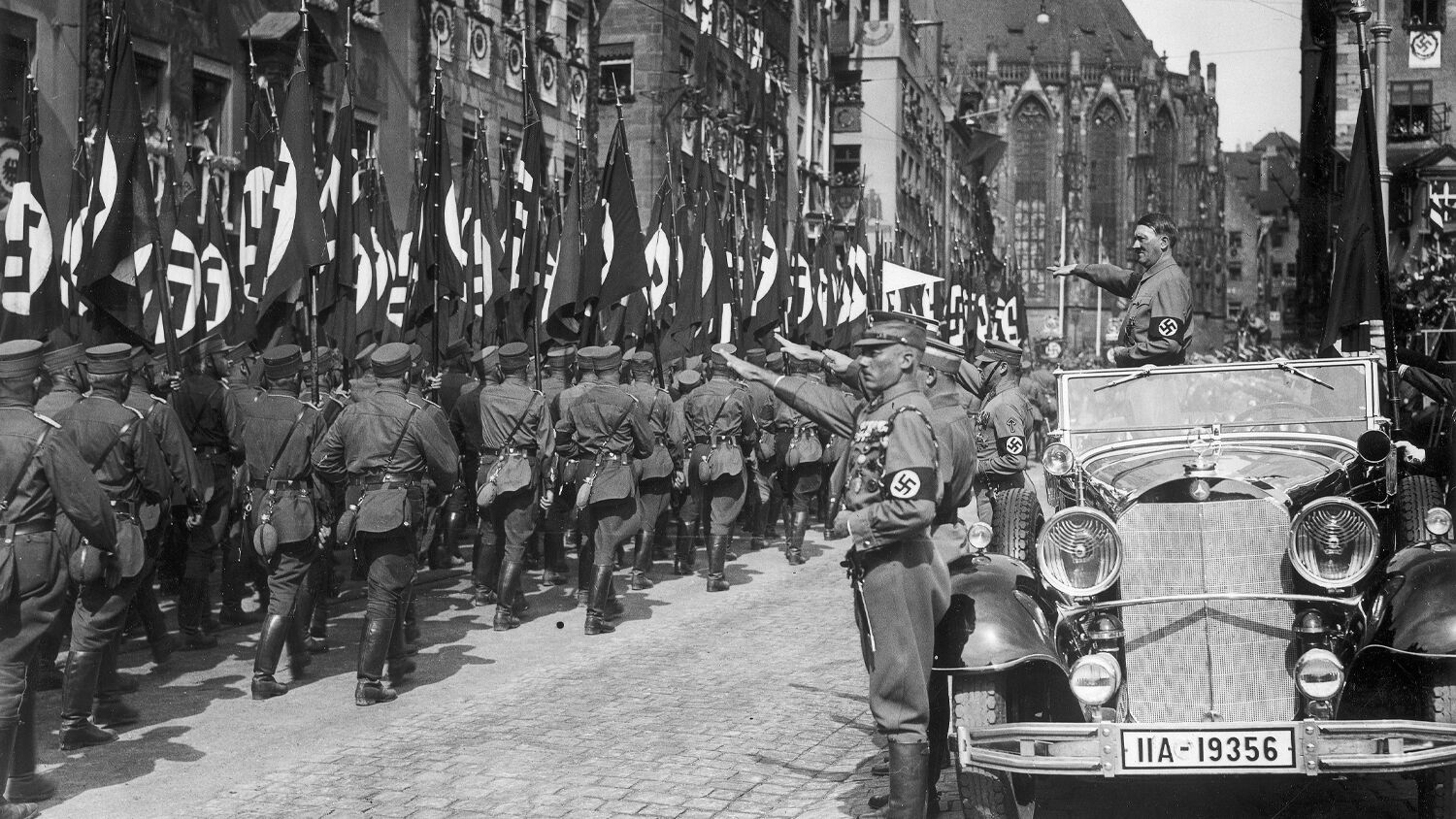 Adolf Hitler standing in his Mercedes-Benz 770 reviewing SA (Sturmabteilung) members in a parade during the Nuremberg rally in 1935.
Public Domain

In a radio broadcast on May 9, 1945, from the newly forming United Nations organization, a man named Herbert W. Armstrong made this remarkable statement about Germany’s post-war rise: “The war is over, in Europe—or is it? We need to wake up and realize that right now is the most dangerous moment in United States national history, instead of assuming we now have peace!

“We don’t understand German thoroughness. From the very start of World War II, they have considered the possibility of losing this second round, as they did the first—and they have carefully, methodically planned, in such eventuality, the third round—World War III! Hitler has lost. This round of war, in Europe, is over. And the Nazis have now gone underground. In France and Norway they learned how effectively an organized underground can hamper occupation and control of a country. Paris was liberated by the French underground—and Allied armies. Now a Nazi underground is methodically planned. They plan to come back and to win on the third try.

“The Bible foretells that third round—and it spells doom for us, as God’s punishment, because we, as a nation, have forsaken Him and His ways! The third round is termed, in prophecy, an invasion by ‘Babylon’—a resurrected Roman Empire—a European Union. I have been proclaiming that since 1927….

“Even at this conference, classes and races are demanding their ‘rights.’ This conference, and the United Nations organization it is forming, must solve three problems to succeed. First, Big Three unity; second, the serious problem of what to do with Germany to prevent World War III; and third, solve the world’s injustices against smaller nations, and the growth and tactics of communism toward world domination. Can it succeed?”

If you understand what is happening in Germany and Europe, you know that statement was an astounding prophecy!

Was there really a Nazi underground planned?

The following information ought to have received screaming headlines in the world’s press. The truth is, it hardly made a ripple. That is because this world is in a very deep stupor. Here is what Reuters’ Arthur Spiegelman wrote on May 10, 1996 (emphasis mine): “Realizing they were losing the war in 1944, Nazi leaders met top German industrialists to plan a secret post-war international network to restore them to power, according to a newly declassified U.S. intelligence document.

“The document, which appears to confirm a meeting historians have long argued about, says an SS general and a representative of the German armaments ministry told such companies as Krupp and Röhling that they must be prepared to finance the Nazi Party after the war when it went underground. [Seven major companies were represented, including Messerschmidt and Volkswagenwerk. There were also officials from the ministries of armaments and the navy.]

“They were also told ‘existing financial reserves in foreign countries must be placed at the disposal of the [Nazi] Party so that a strong German empire can be created after the defeat.’

“The document, detailing an August 1944 meeting, was obtained on Friday from the World Jewish Congress, which has been working with the Senate Banking Committee and the Holocaust Museum to determine what happened to looted Jewish money and property in the Second World War.

“A U.S. Treasury Department analysis in 1946 reported that the Germans had transferred $500 million out of the country before the war’s end to countries such as Spain, Switzerland, Lichtenstein, Portugal, Argentina and Turkey where it was used to buy hundreds of companies.

“‘Now that the Nazi secret plan has been confirmed, the central question is whether it has been carried out,’ said Elan Steinberg, executive director of the World Jewish Congress.”

Many scoffed at Herbert W. Armstrong’s warning message in 1945, prophesying exactly what this U.S. intelligence document stated. Now the treacherous plot of our own

government to conceal this document has been exposed!

Did the Nazis make plans to come back as Mr. Armstrong prophesied? Precisely.

But he also proclaimed that the Nazis would conquer Britain and America unless we repent. As Elan Steinberg said, “the central question is whether it has been carried out”! And it has been, just as Mr. Armstrong prophesied. And so will the final phase be implemented!

If our people don’t heed and remember, we are going to be victims of those Bible prophecies! We don’t understand “German thoroughness.” And we don’t remember what Herbert W. Armstrong prophesied from the Bible. The truth about Germany was only one of his many prophecies.

This issue of the Trumpet is crammed with such prophecies that have been and are being fulfilled exactly as Herbert W. Armstrong said they would be.

Sooner or later you and I must face this matter! Every person on earth must accept these prophecies. It’s only a matter of when.

How could he envision the future? There is only one answer: Mr. Armstrong was God’s messenger. And you can easily prove that if you are willing.

The prophecies discussed in this Trumpet issue came through Mr. Armstrong. But they came from God and the Bible. There is no other answer.

We cannot separate our life from prophecy, which is about us. It’s about your future and mine!

Study this issue of the Trumpet, and see how important it is to remember.

How did Mr. Armstrong know in 1945 that there would be a European Union led by Germany? God revealed it to him from the Bible.

Only God could have such vision!

There is good news though. What you see happening in Europe is the prelude to Christ’s return. The “Holy Roman Empire” you see rising in Europe right now, to be led by Germany, is going to fight Jesus Christ at His return. That will be the end of Nazism forever!

Let’s make certain that we remember that wonderful prophecy.