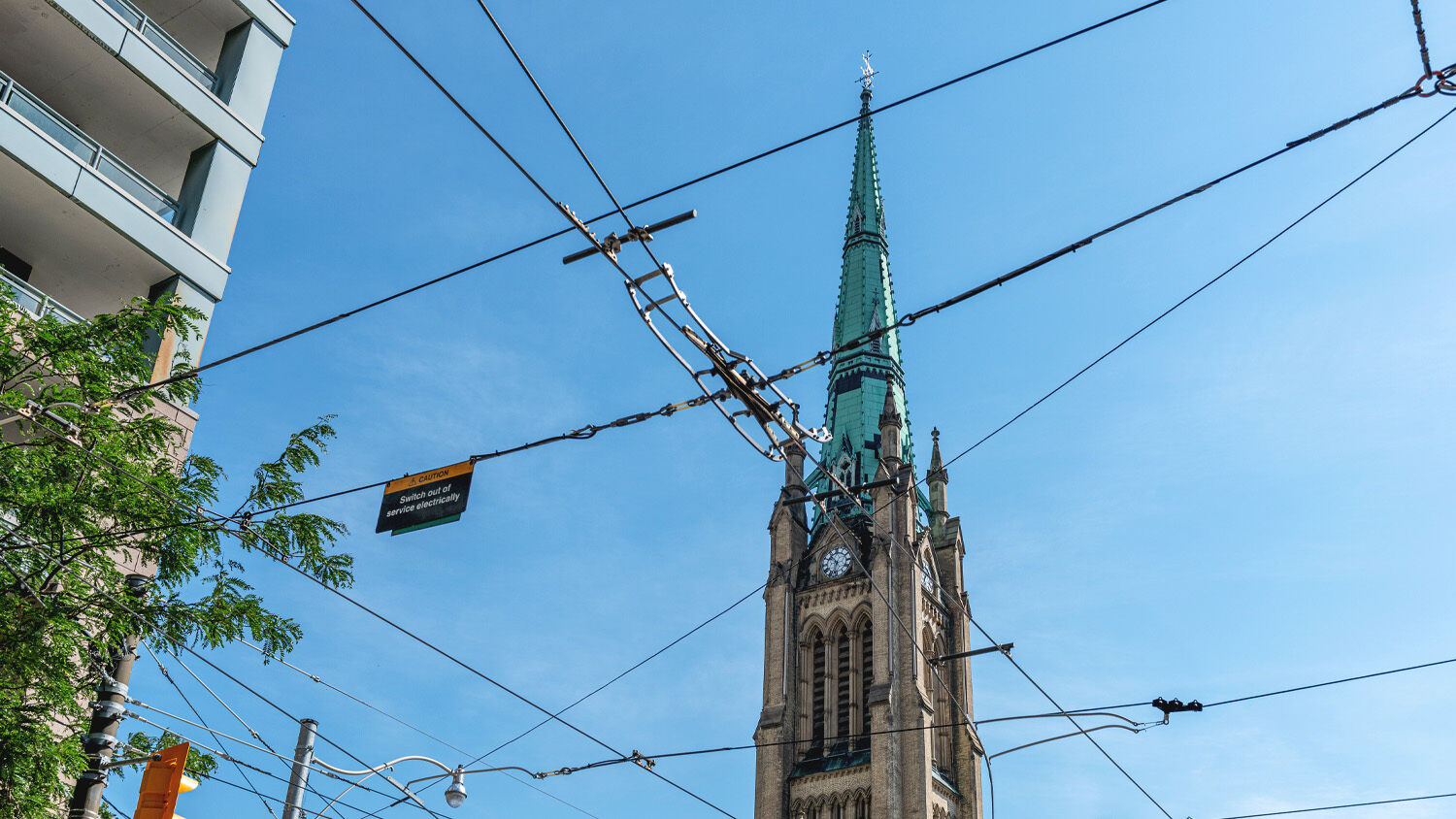 A country that shelters those fleeing religious persecution is now the author of it.

Police in Alberta, Canada, have illegally jailed three religious leaders since the start of the year for holding worship services in violation of public health guidelines. Other churches have had their services illegally disrupted, and all have been hit with heavy fines. These actions highlight an intensifying campaign against religious freedom in Canada.

International headlines picked up on one of the most dramatic of these stories. Artur Pawlowski, pastor of a church near Calgary, Alberta, became famous after a viral video from April 4 in which a health inspector, accompanied by police officers without a warrant, interrupted his Easter service. The video shows the pastor confronting the police and telling them to leave the property, calling them “Communists” and “gestapo.”

“I grew up under communism and my grandparents lived under the Nazis,” Pawlowski told the Toronto Sun. “My family escaped the Communists in Poland and first went to Greece and then to Canada to get away from it.”

Yet this was not the end of Mr. Pawlowski’s ordeal.

Alberta Health Services obtained a court order on April 23 stating that “law enforcement is authorized to do anything necessary to carry out the arrest, including the use of as much reasonable force as may be necessary to make the arrest, and without a warrant to enter any place where on reasonable grounds law enforcement believes that the offending person may be found.” The pastor was only notified a week later.

On May 8, Pawlowski and his brother were arrested. This took place on a freeway and involved multiple police vehicles, a swat team, even a helicopter—expensive treatment normally reserved for fugitives or dangerous criminals actively resisting arrest.

Pawlowski was held until Monday. However, even his release was not without illegal behavior from Canada’s justice system.

Lawyers working to free Pawlowski obtained a court order for his release on May 10. The order was sent to the Calgary prison where he was being held. But the prison stalled, demanding that two separate orders be obtained, one for the pastor and one for his brother, Dawid. When this was done, the prison again refused, claiming that his brother’s name was misspelled. However, this was shown to be untrue, as Dawid is merely a Polish spelling for David.

The hours-long process, with prison officials refusing to obey court orders, was only one episode in many recent attacks on Canada’s rule of law.

Injunctions have become the weapon of choice for those working to restrict religious freedom. Without an injunction, police can only issue a fine, and the recipient can go before a court, forcing the government to produce evidence backing up its claim. An injunction, by contrast, permits police to immediately jail the offender. It also does not specify when the person will be released; in theory, he could remain in prison indefinitely if he refused to accept the government’s release conditions.

On May 6, Alberta Health Services quietly applied for an injunction giving it power to arrest anyone found gathering outside in groups of five or more. This was granted and announced in a press release the same day.

Usually, injunctions target a narrow list of people. This one was different. It gave Alberta’s heath officials power to jail virtually anybody for an unlimited period of time. According to the press release, “All other organizers of advertised illegal gatherings and rallies breaching covid-19 public health orders” were included.

This attracted scrutiny from legal firms. On May 10, the injunction was amended to target one specific entity: a café that refused to close. Yet three days after this amendment, the government used this same injunction—illegally—to target another pastor.

Pastor Tim Stephens had no connection to the café, neither was he notified of the injunction before his arrest on May 16. This too is illegal; executing a court order without notifying the suspect is only allowed in situations such as domestic violence, where the advance notice might endanger the victim’s life.

Stephens was kept in a Calgary prison for two days until his lawyers came to an agreement with a judge.

Under the same law, Alberta pastor James Coates, who runs GraceLife church, spent 35 days in prison. Why the longer time behind bars? The judge required that Coates stop worship services as a condition for release. But Coates refused, saying it violated his religious beliefs. Meanwhile, Alberta Health Services erected a security fence around GraceLife church and hired a private security company to prevent congregants from entering.

Other provinces have seen similar incidents. In Ontario, police interrupted a worship service at a church in the small town of Alymer and sent the congregation home.

In every instance which has received media attention, at least one of Canada’s laws governing religious freedom was violated. Further, most if not all of these “crimes” are not punishable by jail time.

Section 176 of Canada’s Criminal Code makes it illegal to interrupt a religious service or to arrest a religious leader at any point during, immediately before or after a worship service. Anyone, including law enforcement, can be imprisoned for up to two years for disrupting a religious gathering.

Suppressing religious gatherings could also violate the Canadian Charter of Rights and Freedoms, infringing on “freedom of conscience and religion” and “freedom of peaceful assembly.” These freedoms are “subject only to such reasonable limits prescribed by law as can be demonstrably justified in a free and democratic society.”

According to the data, the answer is no.

The Justice Center for Constitutional Freedoms compiled data from Statistics Canada and found that as of May 15, Canada’s coronavirus mortality rate was 0.07 percent. This makes the survival rate 99.93 percent. There are currently 2,594 coronavirus patients in hospital across the country, including those in intensive care. This equates to 0.006 percent out of a population of over 38 million.

Individual provinces follow this trend. As of May 13, Alberta’s mortality rate was 0.05 percent, with 99.95 percent of people recovering. Out of a population of over 4.4 million, 737 people were in hospital for coronavirus—this is 0.016 percent of the population. The average age of those who died of coronavirus was 81, compared to a provincial life expectancy of 81.6.

For over 150 years, Canada has enjoyed a level of religious freedom seen in few other nations. The nation prides itself on being a haven for those fleeing religious persecution around the world.

Yet Canada’s leaders are now reducing that freedom by enforcing highly questionable and often illegal interpretations of the law for a disease with a survival rate in excess of 99 percent.

Artur Pawlowski spoke from his own experience when he warned that the government is amassing power in a way similar to Soviet Russia. He compared the situation to how the gestapo, under Hitler, would use its power to threaten, imprison and eventually kill those who disagreed with the state.

Why is the suppression of religious groups becoming acceptable in a “free” nation such as Canada?

The reason for Canada’s war on churches is explained in our article “A Dangerous New Age of ‘Worshiping the Will,’” by Trumpet editor in chief Gerald Flurry. In it, he warned of the danger posed by politicians who ignore facts and the rule of law in favor of their own will—their own views or feelings about what is true. Dictators such as Hitler and Stalin came to power in this way.

Canada is losing its rule of law because it has rejected the ultimate source of law: God. “When human beings reject God’s truth, they start worshiping their own opinions,” wrote Mr. Flurry. “When this type of thinking becomes entrenched enough, people stop even caring about the difference between true and false. … Such reasoning paves the way for tyrants! Tyrants hate facts and truths that limit their power. So they ignore reality in favor of their own ‘magic interpretation’ of the world.”

There is a spiritual dimension to Canada’s war on churches. Read Mr. Flurry’s article “A Dangerous New Age of ‘Worshiping the Will’” to understand what is behind this attack on Canada’s religious freedom.