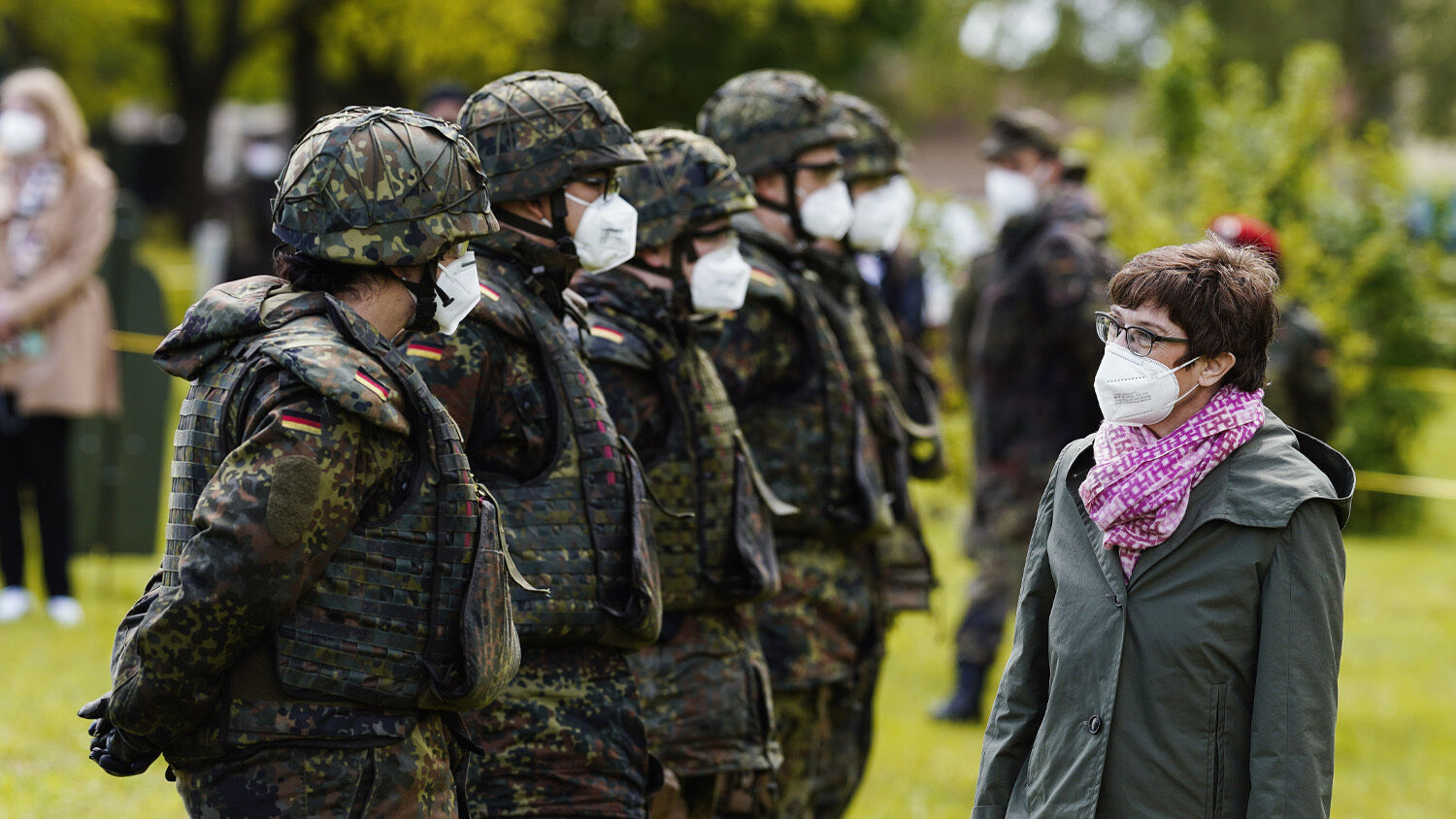 Annegret Kramp-Karrenbauer (right) talks to recruits during her visit to the NBC Defense Battalion 750 “Baden” on May 17 in Baden-Wuerttemberg, Bruchsal.
Uwe Anspach/picture alliance/Getty Images

Almost every week, we hear of Russia’s advances into Eastern Europe, its military buildup, or increasingly dictatorial manners. But almost overlooked is how European Union members are uniting militarily in response to Russia’s advances. European arms industries are merging. Joint exercises are being held. New cooperation agreements are being signed. Europe’s military advances may seem small and tedious. But once the plans are drawn, the foundation laid, and the components gathered, Europe’s military buildup will be sudden.

On June 7, 2017, the European Commission launched the European Defense Fund. On January 1 of this year, a budget of close to $10 billion was approved for the fund between 2021 and 2027. On March 22, the EU went a step further and established a European Peace Facility, a financial instrument to cover the EU’s “external actions that have military or defense implications.” The budget for the peace facility amounts to another $6 billion for the period of 2021–2027.

“Sometimes you need military means to establish peace,” said Belgian Member of European Parliament Hilde Vautmans. “A geopolitical Europe also needs the means to be able to have an impact.” The Guardian reported in “Hard Power: Europe’s Military Drift Causes Alarm”: “In the midst of the covid-19 pandemic these developments have slipped under the radar, but they represent a significant expansion in security policy with wide-ranging consequences.”

On May 19, Germany’s Christian Democratic Union leader Armin Laschet revealed his vision for “a core Europe.” In matters of foreign policy, he called for Europe to act together and deal with questions of armaments and military policy.

The nato exercise “Steadfast Defender 2021” ran from May 12 to 20 in Ulm, Germany, for rapid troop movement on the Continent and from May 20 to 28 for large-scale maritime deployment. Visiting the exercise in Ulm, German Defense Minister Annegret Kramp-Karrenbauer pledged that “Germany is ready for more responsibility—as a strong European pillar of nato” (Trumpet translation throughout).

“Exercise Steadfast Defender 2021 will test nato’s readiness and military mobility, with forces deploying across land and sea, all the way from North America to the Black Sea region and off the coast of Portugal,” said nato Secretary General Jens Stoltenberg.

Some 300 participants from 18 nations trained in Ulm. “It was the first time the staff of the Joint Support and Enabling Command (jsec) took part in a large-scale nato exercise, together with the Standing Joint Logistics Support Group (sjlsg), located in the Wilhelmsburg Barracks in Ulm as well,” the jsec public affairs office noted on its website. “While jsec focused on enabling the movement and integration of around 15,000 simulated forces in the Supreme Allied Commander Europe’s (saceur) area of responsibility, the sjlsg focused on coordinating the projected forces and their consistent sustainment flow.”

The exercises marked “an important milestone on jsec’s path to full readiness in fall 2021,” jsec noted. The stated goal is to strengthen interoperability, deterrence and defense. “The future mission of the jsec is to coordinate all troop movements of nato partners within the entire alliance area and in all directions 360 degrees, in peacetime as well as in crisis and conflict scenarios up to joint national and alliance defense according to Article 5 of the nato Treaty,” Bundeswehr.de noted May 18.

The multinational command is part of the new nato command structure. Germany serves the command as a “framework nation,” providing personnel resources as well as materiel and infrastructure for the Joint Support and Enabling Command in the initial phase.

Bundeswehr.de noted: “Germany is central to the defense of all European nato partners as a transit country and extended area of operations. Kramp-Karrenbauer said, ‘Germany is the hub of the alliance in Europe. The jsec ensures military action capability throughout the alliance area, for a secure Europe and a strong European pillar of nato.’”

“We ensure that military forces are in the right place at the right time,” said Lt. Gen. Jürgen Knappe, commander of Joint Support and Enabling Command. “jsec has nato’s back and is one of the commands reporting to Supreme Allied Commander Europe.” Beyond military logistics, the command acts as an interface bringing military and civilian knowledge together—nationally and internationally.

The late theologian and editor in chief of the Plain Truth magazine, Herbert W. Armstrong, warned in 1980 that fear of Russia “will be the spark to bring the heads of nations in Europe together with the Vatican to form a ‘United Nations of Europe.’” This astonishing forecast is proving true and is explained in detail in our Trends article “Why the Trumpet Watches Europe’s Ongoing Unification Project.”

Within nato, Europe is developing to be a military force to reckon with. And Europe’s independent military projects have recently received the blessing of the Biden administration.

In 2017, 25 EU member states reached an agreement on major military cooperation. “At present, 46 #PESCO [Permanent Structured Cooperation] projects are ongoing,” the European Defense Agency tweeted, “with 26 of them due to deliver concrete results by 2025 in areas such as #military mobility.” Permanent Structured Cooperation is Europe’s mobility initiative that seeks to strengthen Europe’s independent military ambitions. Led by President Joe Biden, the U.S. is now joining pesco.

We are facing - now and for the foreseeable future - the most challenging combination of risks and threats since the end of the Cold War. pic.twitter.com/XbmHogHEND

The Express called the move “the latest sign the Joe Biden administration is at peace with Brussels developing its own armed forces.”

“The deal is seen as the first tangible sign that U.S. President Joe Biden is receptive to Europe’s military ambitions—a change from the Donald Trump era,” Politico noted.

nato was founded to, in part, prevent Germany from building its own independent armed forces and prevent it from dominating Europe once more. Today, however, it appears to be an accepted fact that Europe is developing into an independent pillar in the nato framework. Is this pillar supporting the U.S.-led alliance or its own ambitions?

Another recent development shows that Europe is heading full steam ahead for strategic independence. Germany, France and Spain have reached an agreement to jointly develop a modern air combat system. The agreement, announced on May 17, is the result of long negotiations to ensure that all involved industries profit off the multibillion-dollar Future Combat Air System that also includes a new fighter jet, which will replace the eurofighter.

Kramp-Karrenbauer and her counterparts Florence Parly (France) and Margarita Robles (Spain) declared that the first “demonstrator” will be developed by 2027 and the air combat system will be operational by 2040. The Next Generation Weapon System in a Future Combat Air System “involves more than a new combat aircraft,” n-TV.de noted. “The system includes federally controlled drones and a data network (‘Combat Cloud’) that aims to achieve superiority in information.”

“It is good that progress is being made on this important European project. However, the funding for this project is not secured,” said Free Democrat defense politician Alexander Müller. “Here, the German government must finally show its colors as to whether it wants a strong and secure Europe. For us, it is clear: Such major projects only make sense in European cooperation.”

This achievement also lays the groundwork for the planned Main Ground Combat System that includes a new European super tank.

All these advancements are happening underground, without a clear European leader giving the orders. But once Europe’s industries are merged, its armies coordinated, and its independence granted, the Bible reveals that a European empire will suddenly emerge, united by one strong leader. Based on these prophecies, Mr. Armstrong warned of Europe’s military unification long before it happened. Our Trends article “Why the Trumpet Watches Europe’s Ongoing Unification Project” states:

Herbert W. Armstrong warned of this military union for decades. In May 1953, he wrote that “10 powerful European nations will combine their forces.” In August 1978, he warned: “The Europeans are far more disturbed about their safety in relying on United States military power to protect them than Americans realize! …

You can read more about Mr. Armstrong’s astonishing Bible-based forecasts in our free booklet He Was Right.

Daniel 2 prophesies of four world-ruling empires from the time of the Prophet Daniel to the Second Coming of Jesus Christ. As Mr. Armstrong explained in The Proof of the Bible, each empire can easily be identified, revealing where we are in prophecy. Juxtaposing historic events with prophecy shows that we are at the very end of mankind’s rule over man. Daniel 2 describes the final empire as being “part of potters’ clay, and part of iron, the kingdom shall be divided; but there shall be in it of the strength of the iron, forasmuch as thou sawest the iron mixed with miry clay” (verse 41). Daniel revealed that the weakness of this empire would be a lack of unity. The warring and disputing and the temporary uniting of European nations proves this prophecy most accurate. As Europe is pushing for greater military unity, we also see that not all EU nations are willing to unite in that way.

Revelation 17 further describes this empire. This prophecy confirms that we will see 10 nations or groups of nations led by 10 authoritarian kings emerge out of the present union.

Written millenniums ago, the Bible has most accurately predicted the future. Most of its prophecies are for our day. Learn about the accuracy of the Bible and what it reveals about its Author by requesting a free copy of The Proof of the Bible, by Herbert W. Armstrong.