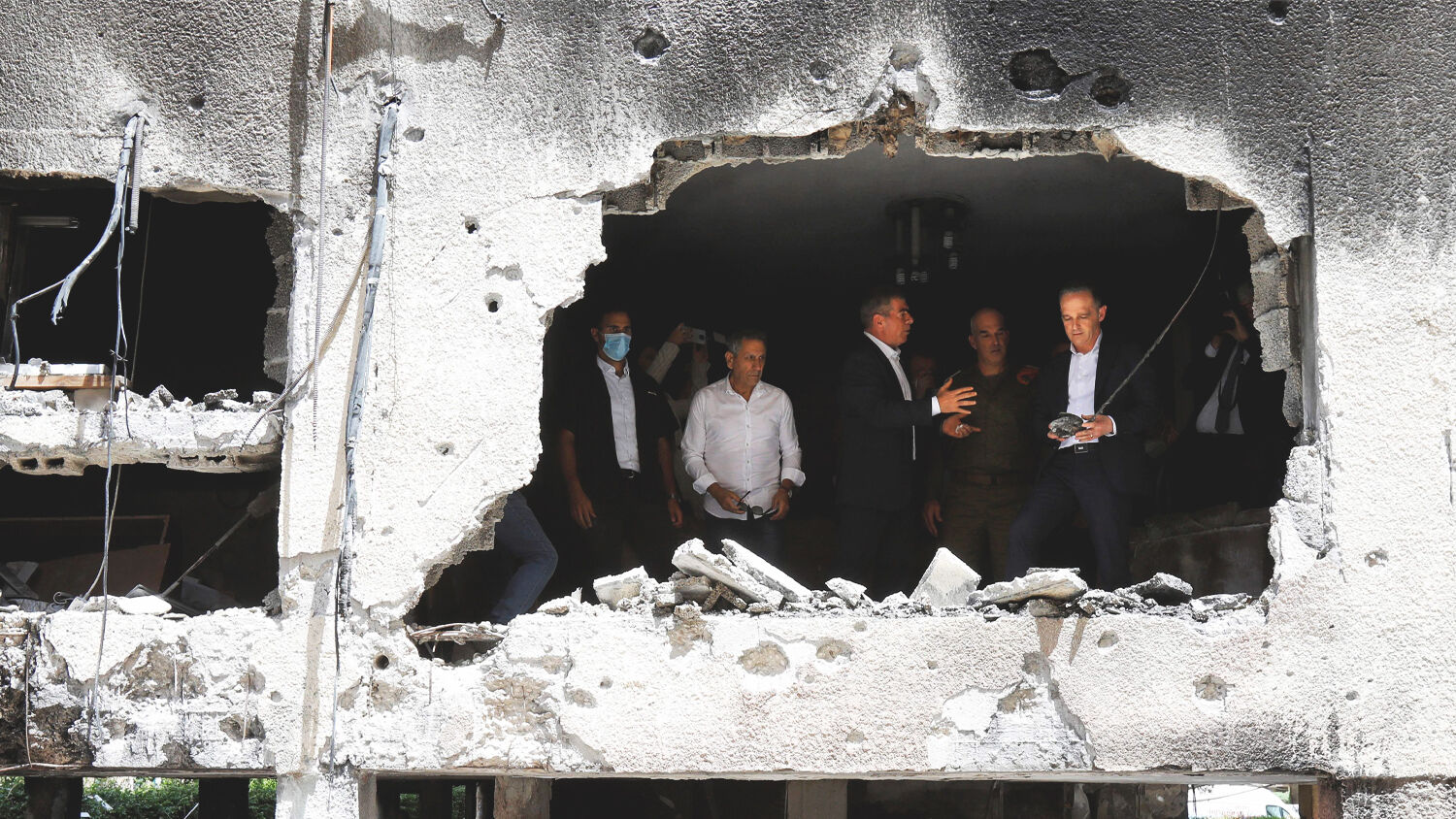 Israeli Foreign Minister Gabi Ashkenazi and German counterpart Heiko Maas visit a building that was hit during the Israeli-Palestinian conflict on May 20 in Petah Tikva.
GIL COHEN-MAGEN/AFP/Getty Images

Will Germany intervene in the Middle East conflict?

“Whoever attacks Israel will have to deal with Germany,” Green politician Cem Özdemir said at a gathering with other top politicians who expressed solidarity with Israel at the Brandenburg Gate last week (Trumpet translation throughout). German Chancellor Angela Merkel said in a wdr-Europaforum that Israel has the right “to defend itself massively.” That was also the message of Foreign Minister Heiko Maas during his recent visit to Israel. Within all segments of Germany’s political spectrum, one finds great solidarity for Israel.

Germany recently witnessed many protests against Israel. Stones were thrown at synagogues and Jewish flags burned. These attacks made it all the more important for the government to take a clear stand for Israel.

Although Germany often adopts the foreign political stance of America’s left, it has recently clearly distinguished itself in its rhetoric favoring Israel. In general, the trans-Atlantic partners agree that the two-state solution must be the end goal in negotiations. But while the Biden administration seems to favor Hamas terrorists in the negotiations, Germany presents itself as standing on Israel’s side.

“The Middle East conflict is not insoluble. It is time for Germany to get seriously and sustainably involved as a mediator,” Juliane von Mittelstaedt wrote in his Der Spiegel editorial “Enough With the Empty Phrases!”

Chancellor Merkel emphasized that Germany would try to work with the United States, France and Great Britain for a solution to the conflict. She also regretted that Hungary had not joined the common position of the other 26 European Union states. In her opinion, “indirect contacts” with Hamas need to exist. “Of course, Hamas has to be involved in some way; without Hamas there is also no ceasefire,” Ms. Merkel said.

Hungarian Foreign Minister Peter Szijjarto claims that the EU is opposing Israel and that its statements are usually “very one-sided” and “do not help, especially under these circumstances, when there are such strong tensions.” Another sign that Germany’s support for Israel is but a farce is the fact that Europe indirectly funds terrorist organizations.

Despite the many expressions of solidarity, support for Israel is meager to say the least. Through demanding a two-state solution, negotiating with Hamas, and indirectly funding terrorist organizations, Europe is undermining its credibility. But in a world full of hostility against Israel, Europe’s words of solidarity may seem to be Israel’s greatest hope. Israeli Foreign Minister Gabi Ashkenazi stated, “The fact that German Foreign Minister Heiko Maas is now visiting Israel, while sirens are sounding, is the clearest sign of solidarity and Israeli-German friendship possible.”

As left-wing Democrats in the U.S. demand military support for Israel be removed, Germany has increased military cooperation with Israel and even delivered submarines to Israel that are capable of carrying nuclear weapons. In Jerusalem in Prophecy, Trumpet editor in chief Gerald Flurry writes about this trend in the light of Bible prophecy:

At the mercy of the Arabs [who are primarily sponsored by Iran], little Israel will feel backed into a corner. [T]he Jews are prophesied to go to Germany for help. “When Ephraim [Britain] saw his sickness, and Judah [Israel] saw his wound, then went Ephraim to the Assyrian [Germany], and sent to king Jareb: yet could he not heal you, nor cure you of your wound” (Hosea 5:13). The Hebrew clearly indicates that both Israel and Britain go to Germany for help. … By this point, America will be too weak and too sick itself to help.

We are already seeing Israel beginning to look to Germany for help. …

God tells Judah that Germany cannot “heal you, nor cure you of your wound.” Why does God say that? Because Judah got into this mess by looking to men. Now it is trying to get out of the quagmire by looking to men. The people of Jerusalem will never find a cure or be healed until they look to God! That is what God is teaching them—the hard way.

It is evident that even the most verbal supporters of Israel are not working in Israel’s interest. The Bible reveals that it will only get worse. Forsaken by the whole world, Israel will turn to its former enemy, which the Bible reveals will be its greatest mistake. The recent conflict has once more revealed that Judah’s prophesied wound is caused by trusting in peace negotiations rather than God. Request a free copy of Jerusalem in Prophecy, by Gerald Flurry, to learn where the tensions in the Middle East are heading, how Germany will intervene in the conflict, and how God will ensure that His hopeful plan for mankind will unfold.