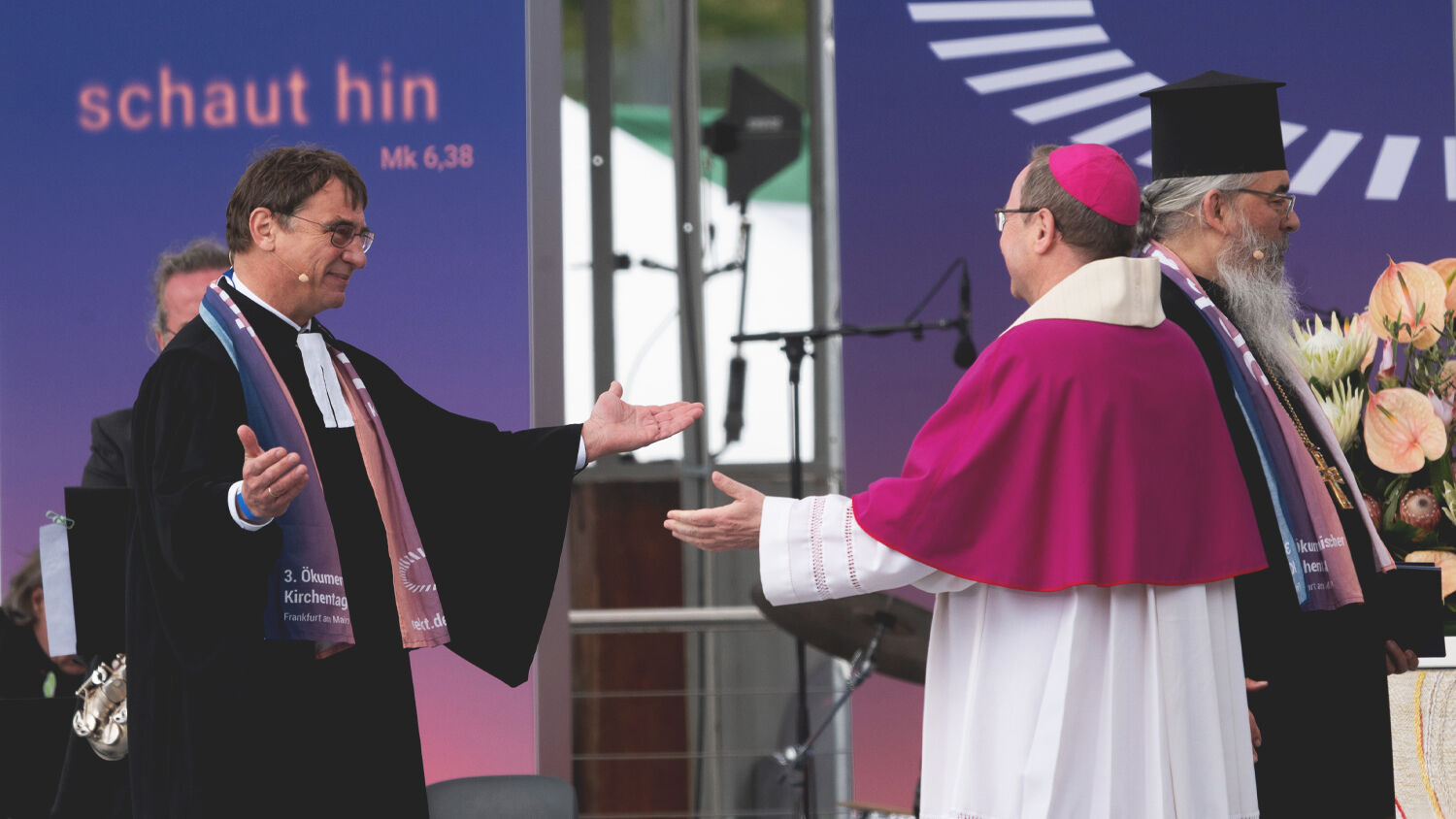 Volker Jung, Church President of the Protestant Church in Hesse and Nassau, extends his arms to Georg Bätzing, Bishop of the Diocese of Limburg.
Sebastian Gollnow/picture alliance/Getty Images

The fulfillment of a long-awaited biblical forecast draws near.

During the coronavirus crisis, the Catholic and Protestant churches have drawn closer together, celebrating ecumenical events and holding joint services. This past Saturday, May 15, the two churches signaled rapprochement at the Ecumenical Church Congress in Frankfurt, Germany. Catholics were invited to participate in the Protestant Lord’s Supper and Protestants celebrated the Catholic Eucharist. Germany’s Third Ecumenical Convention has grown in significance due to the churches’ crisis in declining membership and burdensome covid-19 restrictions.

The ecumenical event was a moment of great solidarity and symbolism. It also revealed a growing desire to lay differences aside and unite forces.

Approximately 160,000 people attended the three-day convention. Due to the pandemic, the event was held “digital and decentralized.” The convention, according to the World Council of Churches website, “opened with a call for Christians to overcome their divisions.” Deutsche Welle wrote, “Germany’s Two Biggest Churches Shift Closer Together in Adversity.”

On Sunday, the event concluded with an open-air church service on the bank of the River Main. The chairman of the German Bishops’ Conference, Georg Bätzing, emphasized that the event “set signs of unity.” He further added, “We welcome Christians of other confessions without reservation.”

Archbishop Ludwig Schick and the Protestant dean Hans Martin Lechner said that both sides “have the Holy Spirit.” Adding, “We belong together as in a family.”

Bishop Gerhard Feige of Magdeburg, head of the Catholic bishops’ commission on ecumenical relations, said the issue of shared communion was “extremely complex and emotionally charged.” President of the Protestant Church in Hesse and Nassau Volker Jung praised the “real ecumenical progress” and called the event a “paradigm shift.”

The event drew criticism from the Vatican, however. Cardinal Gerhard Müller saw it as a “provocation.” Talking to German news agency dpa, he said that no individual could declare “the contrasts between Protestant and Catholic creeds to be beside the point or ignore them.”

Speakers also discussed politics at the event with high-ranking politicians, such as German President Frank-Walter Steinmeier and Chancellor Angela Merkel, in attendance. “Climate and coronavirus crises, women in the priesthood, and coming to terms with sexualized violence: Current political issues and internal church disputes dominated the Third Ecumenical Church Congress in Frankfurt am Main on Saturday,” Die Welt noted (Trumpet translation throughout).

The Ecumenical Convention is part of the Year of Ecumenism organized by the Council of Churches in Germany. There is a great desire for unity among the churches. The Catholic Church, however, is demanding unity under its own conditions. The Bible has prophesied this turn of events in remarkable detail.

The late Herbert W. Armstrong proclaimed since the 1930s that the Catholic Church would unite with its Protestant and Orthodox daughters. In October 1961, for example, his Plain Truth newsmagazine proclaimed: “Protestantism will be absorbed into the ‘mother church’—and totally abolished.”

In a world of uncertainty and rising divisions, this remains a remarkable forecast.

“Come down, and sit in the dust, O virgin daughter of Babylon, sit on the ground: there is no throne, O daughter of the Chaldeans: for thou shalt no more be called tender and delicate” (Isaiah 47:1). God is addressing not ancient Babylon, but the “daughter of Babylon.” A woman in Bible prophecy is often a symbol for a church. “I shall not sit as a widow, neither shall I know the loss of children,” this church says (verse 8). In other words, she will not tolerate being separated from the state or the rebellion of other churches.

This Isaiah 47 church depicts a global organization that has mingled itself with the leaders of this world and experienced a split from daughter churches. Based on this passage, Mr. Armstrong forecast the events we are now seeing. In the November 1963 issue of the Plain Truth, he wrote: “The final—albeit short-lived—triumph of Catholicism is recorded in literally dozens of Bible prophecies. Right now—whether we want to believe it or not—the stage is being set for the greatest revolution in religion the world has witnessed. … The mighty problem of achieving unity is twofold. First, it involves reconciliation of the Orthodox Schism that officially commenced in 1054 and divided the churches in the East …. Second, it involves restoration to the Roman Communion all Protestantism which developed from 1517 onward.”

For more on this prophecy, and where it is leading, read “Returning to the Fold” in our free booklet He Was Right.