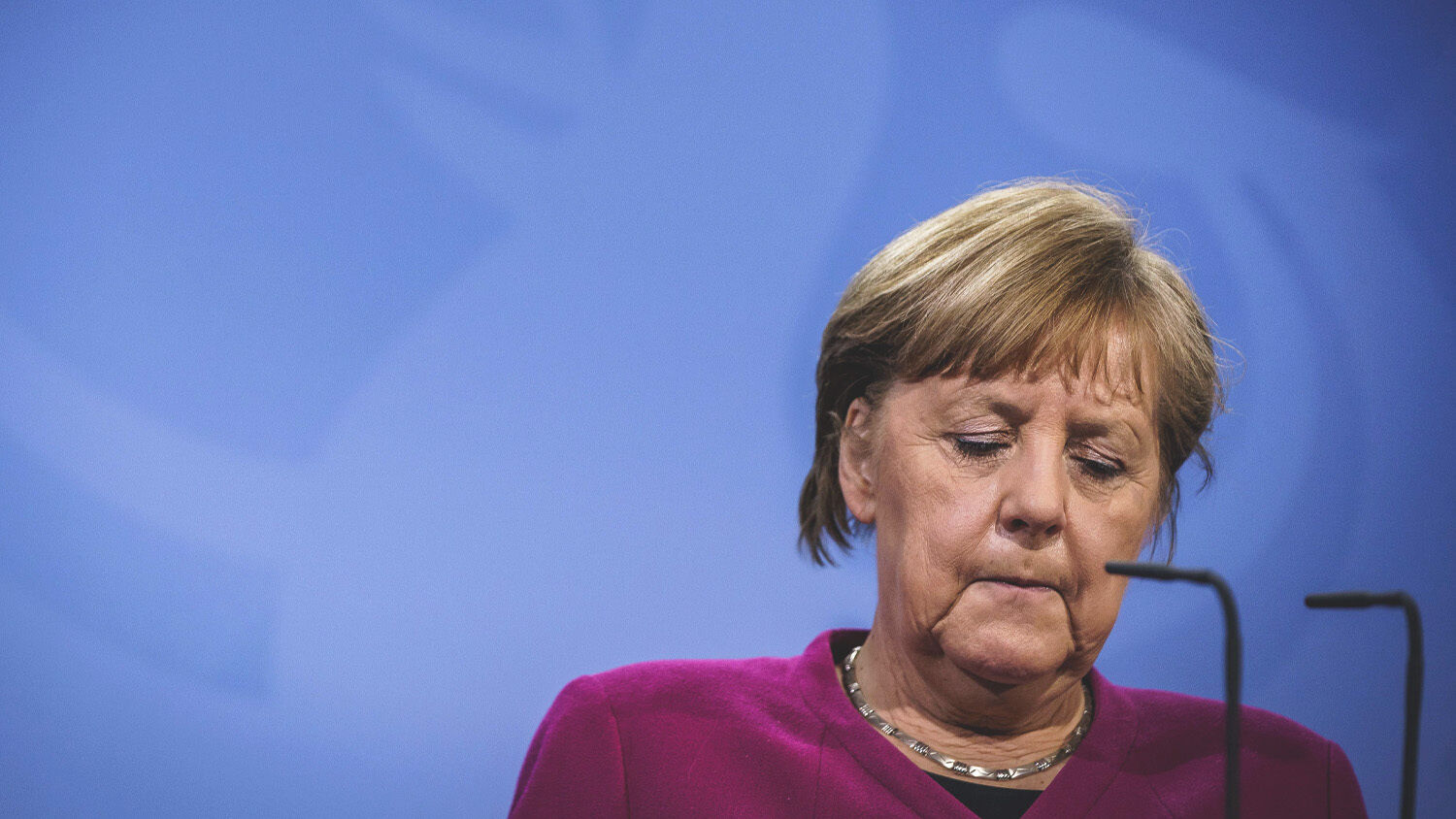 In editorials, online posts and beer halls, the sentiment is the same: Our leaders are pitifully powerless. Something has to change.

Unfähig, machtlos, selbstsüchtig: incompetent, powerless, selfish. That is how many Germans would describe their own national government right now. Katastrophe is the way they would summarize the government’s coronavirus response. Some are saying this in private; others in public. And some are becoming rather impatient. According to a survey published on May 17, more Germans than ever in recorded history (61.5 percent) would like to see a big shift within the federal government.

Despite Germany’s world-class economy, medical infrastructure and pharmaceutical industry, its management of the covid-19 outbreak has been a crisis of its own. Politicians, commentators and everyday citizens agree that this crisis is self-inflicted. They blame not just individual politicians or parties, but their democratic form of government itself.

“The coronavirus pandemic in Germany has exposed numerous weaknesses in the state system: from unclear and contradictory responsibilities to failed digitization and a lack of personnel,” Germany’s n-TV.de noted on March 29.

Germany’s most prestigious magazine has revealed the country’s dire mood. “The pandemic has anesthetized public life. In the second German lockdown, many Germans are merely exhausted,” Der Spiegel noted on February 26 in a cover story written by a team of reporters who compiled stories of a “fading country.” On March 29, the cover story was “Descent of a State: The New German Incompetence,” which asked: “Why can’t we get a handle on the coronavirus mess? It’s about more than scandals and mishaps: The republic’s systemic weakness is being revealed, and the citizens’ patience is at an end. … The rude awakening is taking place right now and is coupled with resentment against politicians.”

German national Thomas Kielinger wrote in “Germany Is Facing an Epic Identity Crisis,” “After 16 years in the saddle, Angela Merkel’s legacy is a disoriented and divided country. [O]ur woefully inadequate response to the covid pandemic is chipping away further at the time-hallowed perception of German excellence in organizational matters” (Telegraph, April 4). The pandemic has exposed a divided country. Reporting on the results of a recent survey, Prof. Dr. Renate Köcher from Allensbach Institute for Demoscopy noted that federalism found more support in the coronavirus crisis than before the pandemic. Nonetheless, we see a push by the media and politicians to erode some of these principles. The question about whether the federal government should have the power to order nationwide lockdowns received little pushback as most favored the lockdown policy.

Yet many Germans are dissatisfied with the government as a whole.

Chancellor Merkel announced in 2018 that she would not run for reelection. Armin Laschet, elected party leader of the Christian Democratic Union on January 16, is now in a prime position to to take her place. As such, the eyes of millions of people were on him for direction in the crisis months of early 2021. But when leadership was needed, Laschet was nowhere to be found. When Germans felt the nation was in an existential crisis, he said he was “contemplating” the next steps to take. This downgraded him from being merely unpopular among the average German to being the laughingstock of the web; the hashtag #laschetdenktnach (or Laschet contemplations) trended in Germany.

But something more serious is taking place: A demand for decisive leadership is building. Many Germans believe that the coronavirus is killing thousands as a direct consequence of government failure. Some say the government is implementing lockdowns in an inconsequential, haphazard, irresponsible manner. It has also been revealed that politicians have been profiting from the crisis through dubious business deals and rank corruption. And on top of it all, the heir apparent to the chancellery, whom Germans expected to end the chaos and confusion, didn’t even offer the promise of a solution.

Some say Merkel, Laschet and other politicians have their hands tied. They could do more if Germany had fewer restrictions on its government, they reason. Yet those restrictions define Germany’s federal republic: They limit the amount of power the government has over its citizens and balance those powers so that no one branch, party or man can amass too much power. But many Germans are saying that the risk would be worth it.

This crisis has Germans questioning whether their nation should remain a democratic republic.

During the pandemic, Chancellor Merkel was leading one way while the state premiers chose their own courses. In most cases, this is a sign of a functioning democracy. Yet it visibly bothered Ms. Merkel.

In a March 28 television interview, the chancellor threatened Germany’s 16 state premiers: If they failed to support the national government’s coronavirus measures, she would “have to consider whether we will find [other] ways” to push the decisions through, perhaps giving the national legislature “a greater role.”

In “Chancellor Wants to Disempower State Leaders,” bild.de noted that Ms. Merkel is now “working concretely on an amendment to the Infection Protection Act, which could be voted on in the Bundestag. If it passes, it would mean a uniform lockdown tightening throughout the country” (April 7). This would be a major transfer of power from German states and citizens to the national government and would destroy a major principle on which Germany was founded.

Germany’s small-state mentality is a success story that goes back centuries. The French philosopher Charles de Montesquieu admired the “federal republic of Germany” after touring the Holy Roman Empire in 1728–29. After the National Socialist period, which remains a warning for today of what a monopoly of power at the head of the state can do, the Allies instructed the 11 West German state premiers in 1948 to convene a constituent assembly, the Parliamentary Council. The end result was the Basic Law and with it a strong federal structure for the republic, the foundation of prosperity and stability.

The idea is plausible: The struggle of the states among themselves and with the federal government is living democracy, the centers of power control each other, competition leads to the best result—progress.

But now many accuse this same system of being unfit for crises.

Knobbe continued: “This idea also worked well in the first months of the pandemic, when the roundtable of state premiers established themselves with the chancellor as the body that steered Germans through the coronavirus crisis. Now, however, it has proved dysfunctional.”

So the system that has prevented the rise of another Adolf Hitler has evidently “proved dysfunctional.” Knobbe’s reasoning is that Germany’s entire way of governing itself must change “to equip Germany for special challenges, for extraordinary crises—of which there will probably be more rather than fewer in the future.”

The Trumpet has predicted this outcome for decades. The Bible prophesies that in the time we now live, a strong German leader will come to power through “flatteries” (Daniel 11:21). Based on this prophecy and the forecast of the late Herbert W. Armstrong, Trumpet editor in chief Gerald Flurry has consistently predicted that Germany will, once again, unite under one strongman who walks in the tradition of Charlemagne, Adolf Hitler and other European dictators.

We have often been criticized for this forecast. Despite various crises, observers have seen no sign of such an extensive mood change within Germany. Yet it has been headed in this direction for years, and the coronavirus crisis has transformed the nation and much of Europe.

The European Union as a whole has the same problem as Germany. The EU’s coronavirus crisis management has been a mess. The fact that the EU was restricted from forcing its will on member nations and their citizens was viewed as a good thing. But some are wishing the EU had that power. They just want the problem fixed, and don’t really care how it is fixed.

The Bible reveals that a strongman will take advantage of this prevailing attitude and offer leadership to a desperate Germany and a divided Europe. Daniel 8:23 prophesies of “a king of fierce countenance, and understanding dark sentences.” Revelation 17 and Daniel 2 reveal that this man will rule a conglomerate of 10 European nations or groups of nations. Mainstream Christianity has ignored these end-time prophecies. Current events in Germany, however, perfectly match what was prophesied thousands of years ago.

Our free booklet A Strong German Leader Is Imminent explains:

We believe Baron Karl-Theodor zu Guttenberg could be this prophesied end-time leader!

In the cover story of our January 2020 issue, Mr. Flurry asked “Is KT zu Guttenberg About to Come to Power?” He made bold predictions about Germany’s future and specified who he believes this prophesied strongman will be.

Dark clouds are hovering over Germany. Few speculate what the nation will look like at the end of the present storm. It is about to change from a democracy to an autocracy, and all of Europe will change with it. When you see a changed Germany emerge, remember the Trumpet’s forecast.

The very same passages that prophesy of this radical change in Germany also say it will happen just before the Second Coming of Jesus Christ, “the Prince of princes” (e.g. Daniel 8:23-25). At His return, God’s Kingdom will be established (Daniel 2:44). Dark days are ahead, but they are leading to the brightest hope imaginable. Keep your eyes on Germany.