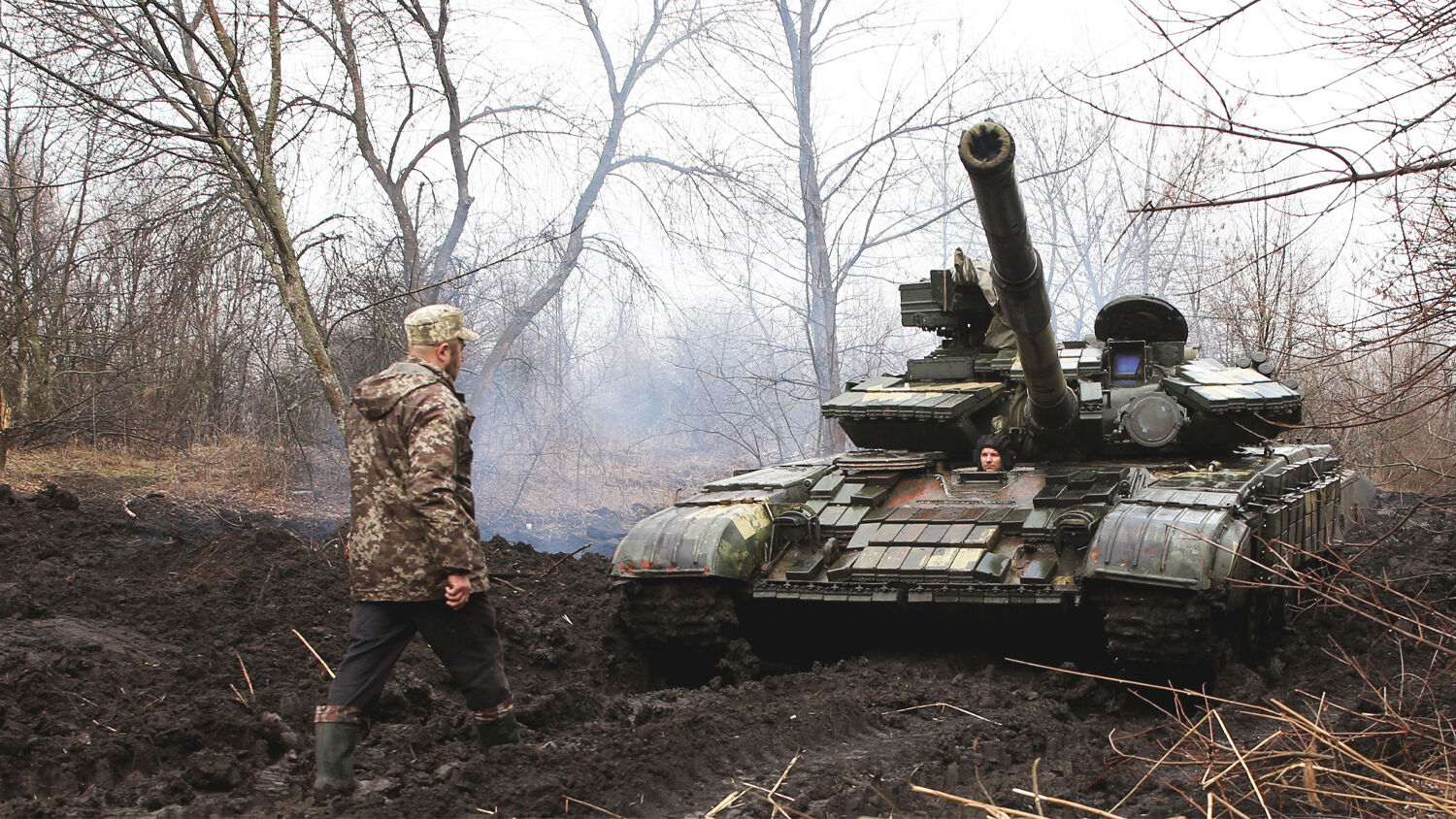 Ukrainian servicemen work on their tank close to the front line with Russian-backed separatists near Lysychansk, Lugansk region.
STR/AFP/Getty Images

The European Union shared a paper with member states last week stating that Russia’s aim is “de facto integration” of areas in eastern Ukraine. The Kremlin has been working toward this goal partly by organizing elections and issuing Russian passports to people in Donetsk and Lugansk, two Ukrainian areas bordering Russia.

In response to the EU’s paper, Dmitry Peskov, a spokesman for the Russian president, said, “Russia has never had any takeover plans, nor will it have any in the future. It has never done anything like that.”

Donetsk and Lugansk have dense populations of Russian speakers, and much of their populations are ethnically Russian. The region is known collectively as the Donets Basin or Donbas.

In 2014, shortly after Russia annexed Ukraine’s Crimean Peninsula, Donbas declared independence from Ukraine, sparking a war with the rest of the nation. Moscow backed the rebels fighting against Ukraine’s army.

Despite many attempts at peace agreements, violence still plagues the region. In February 2015, the leaders of Russia, Ukraine, Germany and France met in the capital of Belarus to negotiate peace. On paper, they agreed to a ceasefire, as well as the withdrawal of heavy weapons by both sides and the withdrawal of the Russian military from Ukraine. In reality, the situation in Donbas did not change.

In April 2019, Russian President Vladimir Putin signed a decree making it easier for people in Donbas to receive Russian citizenship. In the past two years, Russia has handed out over half a million Russian passports to people in Donetsk and Lugansk.

This gives Russia an excuse to send military forces to the region under the guise of “protecting Russian citizens.” In 2008, Russia listed its foreign policy in five points, known as the Medvedev Doctrine. This doctrine puts priority on “protecting the lives and dignity of [Russian] citizens, wherever they may be.”

Recent statements from Russian authorities show they still hold this stance. On April 8, Dmitry Kozak, Putin’s deputy chief of staff, said that if the fighting in eastern Ukraine intensified, Russia “would be forced to come to the defense” of their citizens in the region. The next day, Peskov said that Russia “will not stand aside” if hostilities resume.

“Kozak and Peskov’s comments appear to confirm widely held fears that Russia intends to use its newly minted citizens in eastern Ukraine … to justify open military intervention in regions it has informally occupied for the past seven years,” Peter Dickinson wrote for Atlantic Council.

In 2002, Russia used the same tactic in Georgia, issuing Russian passports to Georgian citizens. Six years later, Russia attacked Georgia, justifying this move as “defense” of Russian citizens. Trumpet editor in chief Gerald Flurry wrote at the time, “Russia’s attack on Georgia in August marks the beginning of a dangerous new era in history. This was the first military strike of a rising Asian superpower—and there will be more! … Will a crisis occur over Ukraine? That area is the breadbasket of Russia, and surely it is willing to wage war over that as well.”

This was written six years ahead of Putin’s annexation of Crimea in 2014. How did Mr. Flurry know the events of 2008 were just the start of Putin’s aggression?

Prophecies in Ezekiel 38 tell of a “prince of Russia” on the scene right now. In 2017, Mr. Flurry wrote a booklet, The Prophesied ‘Prince of Russia,’ explaining this subject. He said:

When you study these scriptures alongside current events revealing modern Moscow’s imperialist direction, you see that Russian President Vladimir Putin could well be the prince of Rosh. We strongly believe he is. …

We need to watch what is happening in Russia and how Europe responds to it. Daniel 11:44 talks about “tidings out of the east” troubling Europe. Putin’s tactics in Georgia, Ukraine, the Middle East and elsewhere are already deeply troubling to Europe and the world. Russia’s resurgence—which we see reported in headlines often—shows that end-time Bible prophecies are rapidly being fulfilled!

Putin’s passport policies show he is still intent on pulling more of Ukraine back under Russia’s control. And just as Mr. Flurry predicted, Russia’s actions are “deeply troubling to Europe.” Keep watching Vladimir Putin, and read The Prophesied ‘Prince of Russia’ to understand the reasons behind his aggressive foreign policy.