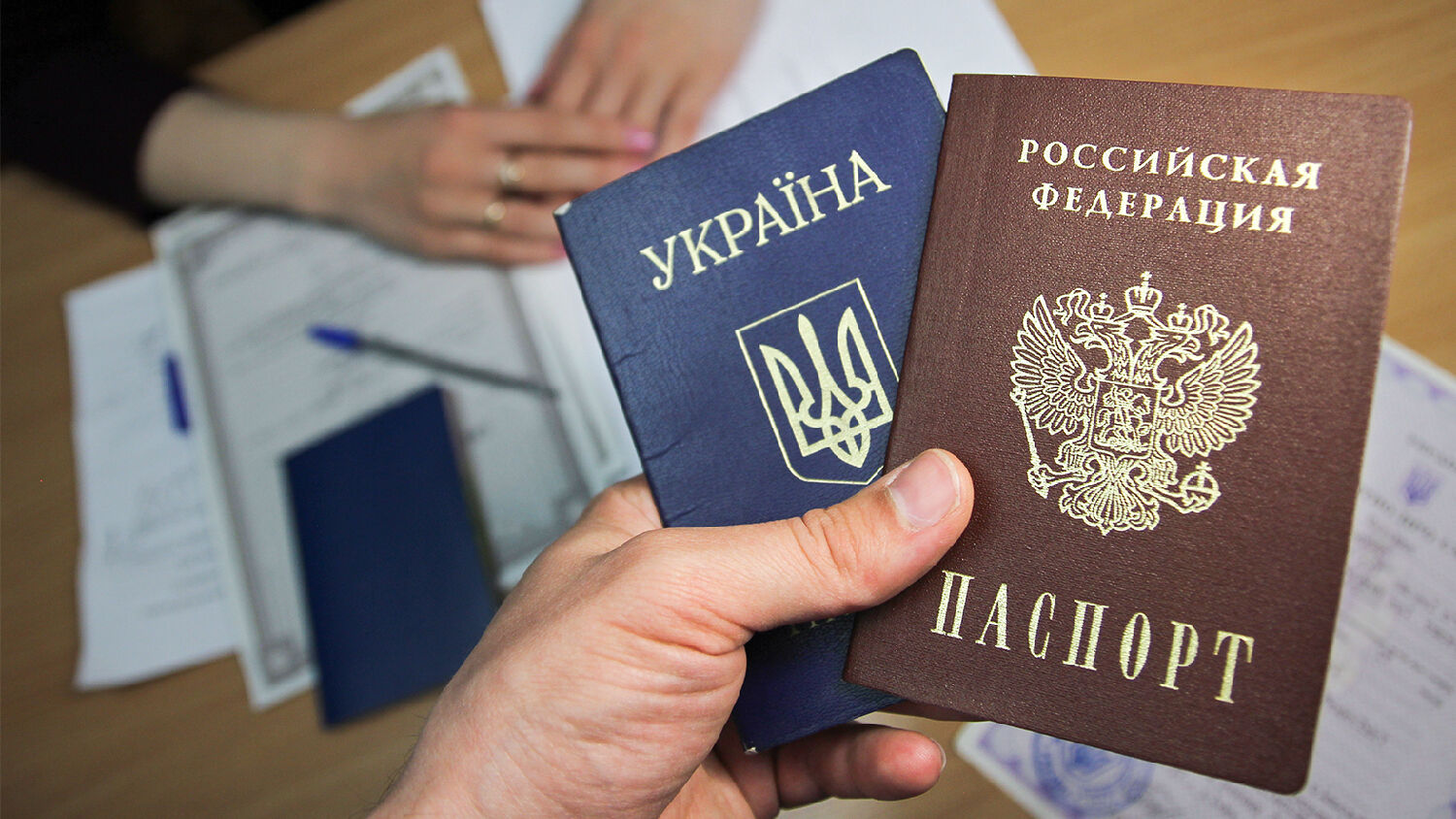 A person holds passports of the Russian Federation and Ukraine at a center for issuing Russian passports to residents of the Lugansk People’s Republic, located in east Ukraine.
Alexander Reka\TASS via Getty Images

Ukraine is the linchpin in Putin’s plan to restore Russian greatness.

Russian President Vladimir Putin signed a decree on May 1 to expedite the procedure for some Ukrainians to acquire Russian citizenship. The new rule applies to those who lived in Crimea before Russia annexed the peninsula in 2014, and to some Ukrainians who have moved to Russia from certain parts of eastern Ukraine since that time.

Russia’s Ministry of Internal Affairs opened a facility in Luhansk and another in Donetsk to help with the process. On May 3, the day that officials started to issue Russian passports, about 100 people seeking to apply for citizenship had gathered in the Donetsk migration center before it opened. According to a poll cited by Kirill Alzinov, the spokesman for Migration Affairs in the Russian Interior Ministry, almost 90 percent of residents in the Donbass region want to receive Russian citizenship.

DNR-News,Today May 3,in #Donetsk they began accepting applications for #Russian passports under the simplified procedure,the queue of those wishing to obtain citizenship of the #Russian Federation was formed at the Building of the Migration Service of the #DPR,#Donbass. pic.twitter.com/FiY4lfPn0g

This Russian offer of citizenship to individuals in a former Soviet state is not an isolated case. In 2002, it issued Russian passports to citizens in the Republic of Georgia from the territories of South Ossetia and Abkhazia. In 2008, Russia then went to war in Georgia partly under the pretext of defending the Russian “citizens” it had created in 2002.

“The governing ideology of the Russian Federation today is Russian nationalism—the goal of which is to protect not only Russians living in Russia but also Russians living in foreign territories,” Geopolitical Futures wrote. Similar to what it did in Georgia, Russia could use “new Russian citizens in Donbass as justification to shift from not-so-covertly funding regional separatists to deploying its own military forces.”

Trumpet editor in chief Gerald Flurry has referred to Ukraine as the “linchpin” of Putin’s goal of a renewed imperial Russia. “A linchpin is the pin in an axle that keeps the wheel from coming off,” Mr. Flurry wrote in the March 2014 Trumpet issue. Putin’s aggressive actions in Ukraine is for the purpose of keeping “the wheels from falling off his dream of a new Soviet empire,” Mr. Flurry continued. The new passport decrees are part of that same strategy.

Just after Russia had waged war against Georgia, Mr. Flurry wrote in the October 2008 Trumpet issue: “Russia’s attack on Georgia in August marks the beginning of a dangerous new era in history. This was the first military strike of a rising Asian superpower—and there will be more!”

“Will a crisis occur over Ukraine?” he asked. “That area is the breadbasket of Russia, and surely it is willing to wage war over that as well.” Six years later, in 2014, Russia annexed Crimea, which formerly belonged to Ukraine. Guided by his understanding of history and Bible prophecy, Mr. Flurry had accurately predicted that Russia would soon invade Ukraine.

“I was certainly right in my prediction that Russia would also get control of Ukraine!” Mr. Flurry writes in The Prophesied ‘Prince of Russia.’ “I knew because Putin has a long pattern of diabolical evil at the level of Joseph Stalin.”

Scriptures such as Ezekiel 38, which Mr. Flurry based his prediction on, show that a powerful bloc of Asian nations will form in the end time, led primarily by Russia and secondarily by China. Verse 2 mentions the “prince of Rosh, Meshech, and Tubal,” ancient names associated with the predecessors of modern Russia (New King James Version). Mr. Flurry has identified Russian President Vladimir Putin as the “prince of Rosh,” a strongman prophesied to lead Russia. In The Prophesied ‘Prince of Russia,’ he writes:

The use of all three names shows that this is an individual ruler of all the peoples of Russia, from the west to the east. … This giant swath of land indicates the prince will probably conquer more nations of the former Soviet Union.

Offering passports to Ukrainians is just another example of this strongman’s bid to make Ukraine part of his Russian empire. This move could be part of a plan to sow division among Ukrainians and weaken the country for a possible future invasion.

To understand why Vladimir Putin is the biblically prophesied “prince of Rosh,” and where his aggressive posture in Ukraine is leading, please request a free copy of Mr. Flurry’s booklet The Prophesied ‘Prince of Russia.’