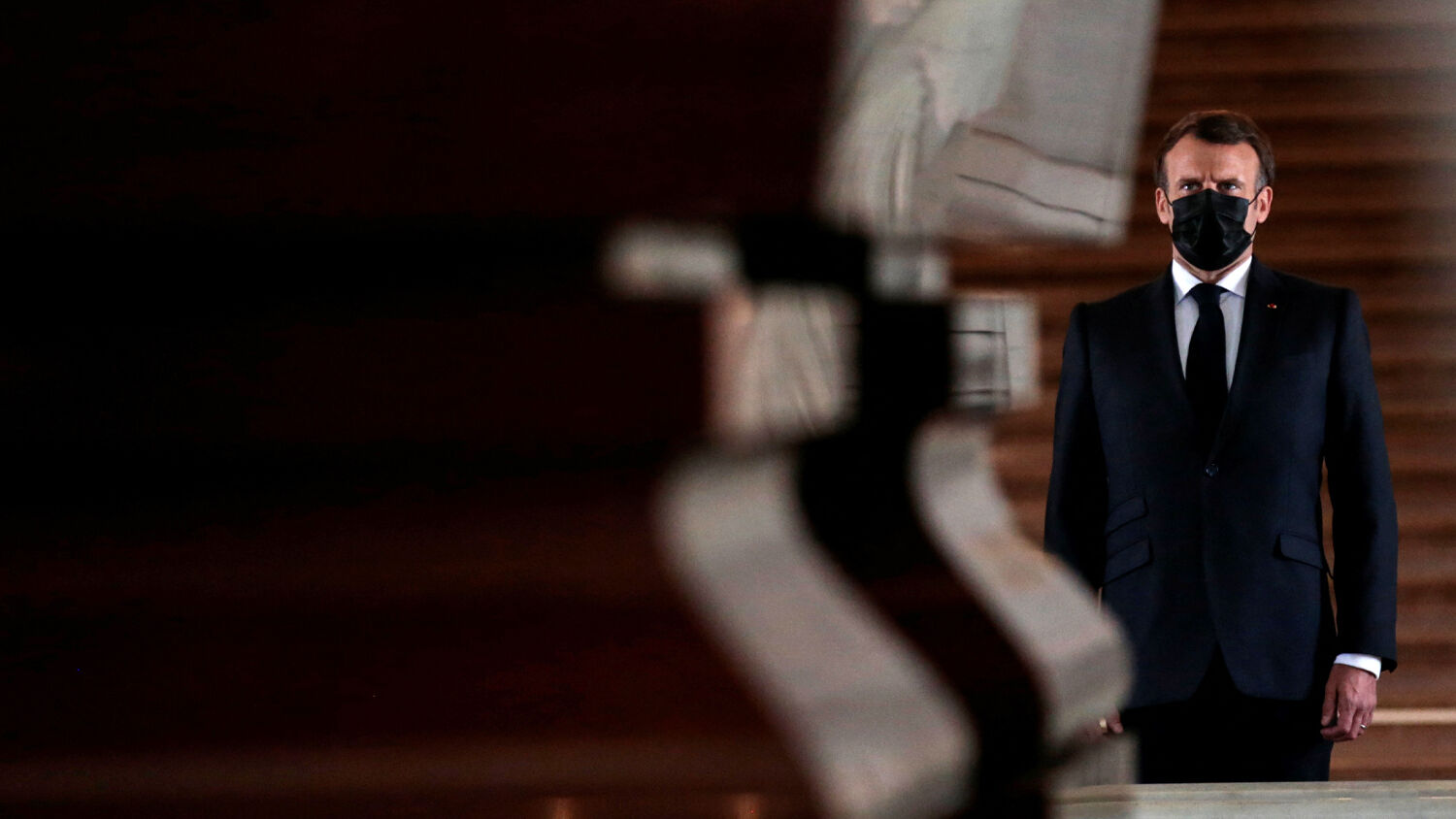 French President Emmanuel Macron stands in front of Napoleon’s tomb during a ceremony marking the 200th anniversary of his death in the Chapelle Saint-Jerome at the Invalides in Paris on May 5.
SARAH MEYSSONNIER/POOL/AFP/Getty Images

In the last 50 years, French presidents have avoided officially honoring Napoleon’s legacy. That has now changed.

By Josué Michels and David Michels • May 6

On May 5, France commemorated the 200th anniversary of the death of Napoleon Bonaparte. French President Emmanuel Macron’s May 4 announcement to commemorate the bicentenary of Napoleon resulted in a heated debate across France. Macron responded by saying, “Napoleon is a part of us.”

For the past 50 years, French presidents have avoided officially honoring Napoleon. Yet Mr. Macron has taken a different approach; he visited Napoleon’s grave to honor the anniversary. “Macron waited until the last minute to announce his plans for the tricky bicentenary and is seeking to walk a middle path between those who wanted a celebration, and others who called for a boycott,” France 24 noted on May 4.

“By choosing to lay a wreath Wednesday at Napoleon’s tomb under the golden dome of Les Invalides, Mr. Macron is stepping into the heart of France’s culture wars,” the New York Times wrote.

Within France today, opinions about Napoleon are mixed. Some view him as a national hero; others view him as an imperialist warmonger. Some celebrate him for leading France out of a bloody revolution; others despise him as a bloody, ruthless egomaniac who sacrificed the lives of his countrymen for his own ambitions.

“How can we celebrate a man who was the enemy of the French Republic, of a number of European peoples, and also the enemy of humanity in that he was an enslaver?” author and activist Louis-Georges Tin and political scientist Olivier Le Cour Grandmaison asked last month in Le Monde (Trumpet translation throughout).

Yet there are those who staunchly support Bonaparte. In the lead-up to May 5, French far-right nationalist leader Marine Le Pen called Napoleon “an eternal French hero,” and criticized Mr. Macron for not celebrating the 200th anniversary. “Why shouldn’t we celebrate Napoleon?” Le Pen asked France radio on Tuesday. “He’s a huge historical figure. I regret that the president is commemorating him in a hurry.”

Polls suggest Le Pen could win the next national election.

“Napoleon [was both] ogre and eagle, Alexandre and Nero … the soul of the world and the demon of Europe,” Macron declared, emphasizing that he was not celebrating the late emperor but commemorating his legacy. Yet as Le Figaro noted, Macron “praised ‘the genius’ of the emperor.”

In the Élysée Palace, Macron reaffirmed his “will to give nothing to those who intend to erase the past because it does not correspond to the idea they have of the present.” He believes in “the fight against ignorance [and] the love of knowledge and history.” Speaking directly to high school students in the audience, he referenced the “masterpieces of architecture and urban planning” that the capital owed to Napoleon. He highlighted “the Arc de Triomphe, the Church of the Madeleine, the Vendôme column … the Austerlitz or Iéna bridges, the Rue de Rivoli” among other things. Macron emphasized that this is Napoleon’s heritage and listed major institutions like the lycée, France’s secondary school, and the Civil Code, the Penal Code, the Council of State, and the Court of Cassation. “All these were gifts of Napoleon to the French,” Macron added. “We owe Napoleon a great deal.”

“If his splendor resists the erosion of time, it is because his life carries in each of us an intimate echo,” Macron said. “Napoleon is a part of us.” Macron tweeted the same message to his followers: “Napoléon Bonaparte est une part de nous.”

“Commemorating this bicentenary is saying simply, serenely, without giving in to the temptation of the anachronistic trial that would judge the past with the laws of the present, but rather retracing what we are as French people,” Macron said.

“Yet Macron’s decision to commemorate Napoleon still represents to some extent an ‘uncanceling’ of one of the top three most well-known French figures internationally, alongside Joan of Arc and Charles de Gaulle,” Politico noted.

While the English-speaking nations of the West embrace a cancel culture against their historical figures, Macron has decided to challenge the cancel culture and take a stand for a man who reintroduced slavery and caused one of the greatest bloodsheds to that point in European history. (This subject has been expounded on in the Trumpet Daily episode “Honoring a Warmonger, Colonizer and Enslaver.”) Macron called the “cancel culture” an attempt to “erase what we are.”

The most important aspect of this anniversary commemoration is that Napoleon’s heritage reveals Europe’s future.

Just as Macron laid a wreath at Napoleon’s tomb at Les Invalides, Adolf Hitler also paid homage to Napoleon in 1940 at the exact same location.

Napoleon and Hitler share a similar history. Both sought an alliance with the Roman Catholic Church and signed a concordat with the Vatican. Both praised Charlemagne as their role model and sought to dominate the European continent and rule the world. The ambitions of both were dampened when they failed to conquer Britain. Both were ultimately defeated as they tried to invade Russia. Yet Hitler today is viewed by most historians as an evil tyrant. Napoleon, on the other hand, is viewed differently.

The Bible, however, categorizes both of these men as part of the same system. God revealed a prophecy in Revelation 17 to the late Herbert W. Armstrong during the time of Mussolini and Hitler. “And there are seven kings: five are fallen, and one is, and the other is not yet come; and when he cometh, he must continue a short space” (verse 10). This is a prophecy of the Holy Roman Empire.

Macron is seeking to win the support of both conservative and left-wing voters in the lead-up to the 2022 election. However, reviving the legacy of Napoleon goes deeper than just a national election. It’s about reviving the heritage of the Holy Roman Empire.

For decades, Mr. Armstrong delivered repeated warnings about the last resurrection of this brutal empire. Trumpet editor in chief Gerald Flurry has continued this warning. The final resurrection will be a union of 10 nations, or groups of nations, united under one overarching leader. It will cause greater havoc than all the previous resurrections combined. Europe is entering a new Dark Age; the coming seventh resurrection of the Holy Roman Empire will make Napoleon’s atrocities look insignificant in comparison.

European leaders are increasingly praising the likes of Charlemagne, Napoleon and Hitler. The mood is changing in Europe. The Holy Roman Empire is about to see its last resurrection before it is put down forever by Jesus Christ at His return. You need to understand this subject. It is going to affect your future.

Read a free copy of The Holy Roman Empire in Prophecy and listen to Mr. Stephen Flurry’s Trumpet Daily program on this subject for the full picture of where this is leading.