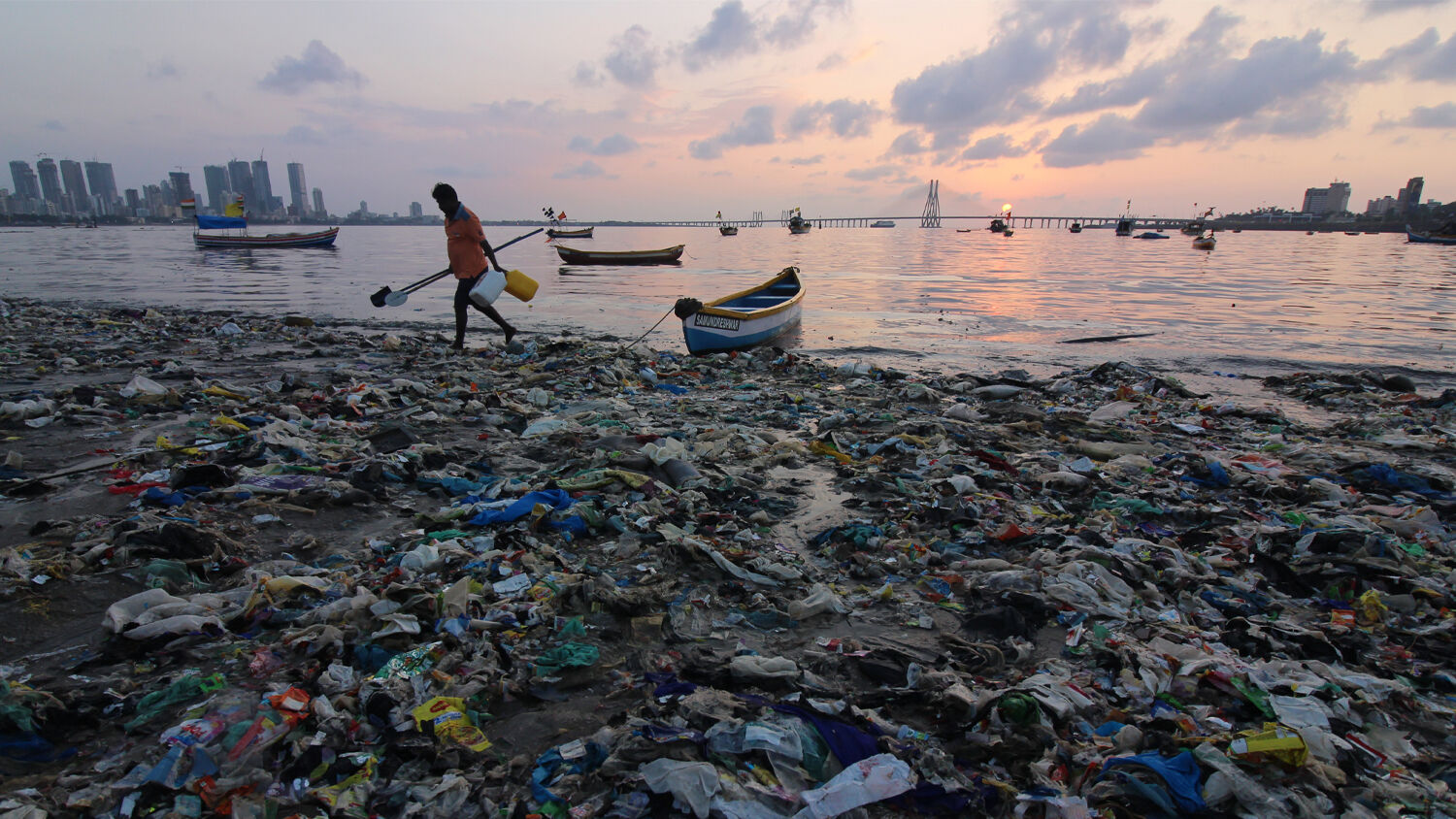 A man walks on plastic waste at a beach in Mumbai, India.
Bhatt/NurPhoto/Getty Images

Are you eating and drinking a teaspoon of plastic every week?

We live in a plasticized world. Since mass production of plastic began in the 1950s, we’ve produced 8.3 billion tons of it, and it has transformed our modern age. Plastics have revolutionized medicinal devices, made space travel possible, lightened cars and jets, and saved lives with helmets, incubators and equipment for clean drinking water, says National Geographic.

But each minute, 1 million bottled drinks are sold. Each year, 5 trillion plastic bags are disposed of. Where does it all go? Much of it persists in the environment. The Blue Planet television series says a staggering 8 million tons per year ends up in oceans.

Chemical plastics and packaging industries that provide many of our consumer goods use more than 90 percent petroleum-based and nonbiodegradable materials. The consequences are lasting. Plastics are found not only in the products we use but also in our water supply, in our food, and even in the air we breathe.

Your endocrine system controls your body’s release of hormones, the chemical messengers that control processes such as growth, metabolism and fertility. This highly complex system is susceptible to external forces forcing it out of balance. One of the strongest of these external forces is a class of chemicals called xenoestrogens. These are synthetic byproducts of the plastic and pesticide industries.

Examples of xenoestrogens include bpa, parabens, phthalates, pcbs, artificial food colors and food preservatives such as bha and bht. They burrow deeply into fat cells and mess up hormonal balances in both men and women, causing an unnatural estrogen dominance. They are also difficult to detoxify through the liver. Absorbing these chemicals leaves you prone to many chronic illnesses.

bpa is perhaps the most well-known xenoestrogen. Manufacturers use it in everything from water bottles and food containers to cash register receipts, and canned food and drink liners. It is found in the urine of about 93 percent of Americans (see the National Library of Medicine).

This despite the fact that this chemical has been linked to just about every disorder imaginable.

Even bpa-free plastics are not safe. Almost all plastic products have some type of compound that can be categorized as having estrogenic activity, Environmental Health states.

Supermarket fruits, vegetables, dairy and bakery products are often packaged in plastics of some kind, providing a pathway for xenoestrogens into your food and into your body. Meat and fish are packaged in foam trays, and restaurant takeout food is sold in plastic trays. Your hormones are also affected by beef and dairy products, which usually contain high residues of pesticides, antibiotics, veterinary drugs and growth-stimulating sex hormones. A study in the journal Chemical Research in Toxicology found 31 substances that are added to food for the purpose of preservation, coloring, texture and flavor have potential estrogenic effects.

About 80,000 chemicals causing hormonal effects have been registered with the Environmental Protection Agency in the last 60 years. Their synergistic effects of exposure are well documented but largely unknown. And what you don’t know will hurt you. These nasty chemicals lurk in every nook and cranny of your home. From cooking pots in cupboards, cleaning supplies in closets, air fresheners in your bedroom, and personal care products in your bathroom—all waiting to unleash a cascade of physiological damage in your body.

An estimated 80 percent of all American rivers are contaminated with synthetic plastics. These flow into the world’s oceans, adding to their estimated 5 trillion plastic debris load. A report by the World Economic Forum and Ellen MacArthur Foundation claims that if the current situation continues, by 2050, the world’s oceans will contain more plastic, by weight, than fish.

The equation becomes monumentally absurd when we add 129 billion face masks per month and 65 billion gloves worldwide that are being used and disposed of due to covid-19. These end up in landfills, on roadways, in rivers and oceans. Most of this new xenoestrogenic pollution deteriorates and fragments into particles of micro- and nano-size that enter our bodies through various pathways like tiny parasites (ScienceDirect.com).

A study commissioned by the World Wide Fund for Nature has found that the global average of microplastic ingestion could be as high as 5 grams a week per person—that’s a teaspoon of plastic, the equivalent of a credit card, every week.

The authors of Our Stolen Future write, “There is no clean, uncontaminated place, nor any human being who hasn’t acquired a considerable load of persistent hormone-disrupting chemicals. … We are altering the fundamental systems that support life.”

What can you do?

Vegetables can be powerful detoxifiers. They contain plant estrogens (phytoestrogens) that balance the estrogen in your body. Cruciferous vegetables also contain the phytochemical indole-3-carbinol that detoxifies, while fruits and vegetables in general, especially chlorella and wheatgrass, raise levels of an antioxidant called glutathione inside your cells and help you detoxify.

In the kitchen, minimize hard plastics and limit canned foods and beverages that can contain bpa. Store foods in glass, avoid plastic-wrapped foods, especially if heating in the microwave, skip bottled water and tap water that’s contaminated with petroleum derivatives.

The ever growing demand for plastic is unlikely to be abated soon. Real environmental stewardship and health management will require nothing less than a change in human nature itself. Only then will our environment and our bodies return to the pristine condition our Creator intended.