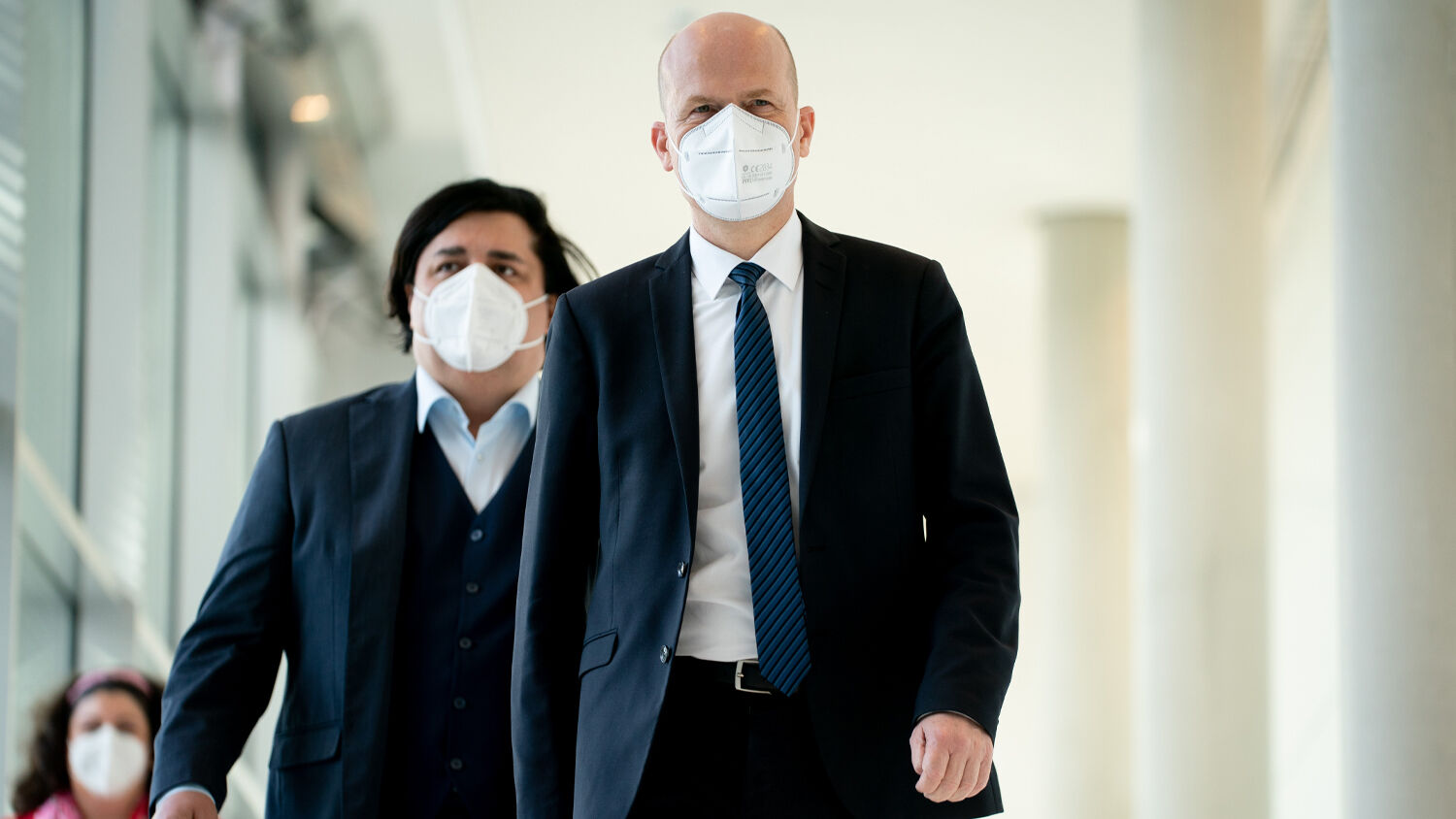 History shows centralizing power is only the first step of worse to come.

“If there is no law today, people will die. This law is a law for life. Vote for it; vote for life!” This is how faction leader of the Christian Democratic Union Ralph Brinkhaus urged parliamentarians to vote for Germany’s amendment Infection Protection Act. The law takes power to enforce lockdowns away from the states and centralizes it in Berlin. On Wednesday, April 21, it was passed by the Bundestag; it was signed by President Frank-Walter Steinmeier on Thursday. Germany’s most popular newspaper Bild referred to it as “A Black Hour for Freedom!”

The new law will be enforced until June 30. But the constitutional court is already receiving complaints. Some see it as an unprecedented power grab in modern Germany that sets a dangerous precedent on how Berlin could force its will on states in the future. Perhaps even more concerning than the law itself is how the opposition to it was ignored.

Brinkhaus made it sound like if you oppose the law you oppose life. But is that really true?

Throughout the pandemic, Germany’s government, led by Chancellor Angela Merkel, has negotiated lockdown measures with the various state premiers. But it was ultimately up to the individual states to implement the measures according to their own judgment in their specific circumstances. The federal government’s lack of power visibly annoyed Berlin.

On April 21, 342 members of parliament voted in favor of the so-called “emergency brake”; 250 voted against; 64 abstained. While the pro-business Free Democrats opposed the bill, the Greens abstained unanimously, demanding stricter measures.

The law stipulates a unified system of curfews, despite the fact that there’s no evidence curfews help stop the spread. Additionally, states that test more people—and therefore find more cases—could find themselves punished because of increased testing.

Constitutional law expert Walther Michl from the University of Munich told Bild that the curfews are “legally questionable” and give “the police the power to carry out groundless checks on the street—merely on the assumption that a citizen is on his way to a forbidden meeting.” Lawyer Niko Härting called the curfew a “profound restriction of the fundamental rights of tens of millions of citizens.”

Critics of the new law have been violently suppressed.

While the law was being passed, 8,000 people protested in front of the Reichstag building in Berlin. They were confronted by police for not abiding by social distancing measures. Voices over loudspeaker demanded that the protesters leave the demonstration site. A large contingent of 2,200 police officers ended up clashing with the protesters. Over 150 protesters were arrested.

Germany is doing its best to discourage protests. Not only are demonstrations banned if social distancing isn’t obeyed, but protesters are also treated as an enemy of the state.

Berlin’s Office for the Protection of the Constitution has placed some individuals under surveillance. Similar measures have been taken in Hamburg und Baden-Württemberg. German Interior Minister Horst Seehofer believes that a nationwide observance could soon follow.

The authorities claim it is in everyone’s best interest. But is this the way a true democracy functions?

“The coronavirus protests have changed noticeably,” Berlin’s interior senator, Andreas Geisel, told the Committee for the Protection of the Constitution of the Berlin House of Representatives. The protests have “radicalized” and become “a catalyst and outlet for skepticism about democracy and, in some cases, even contempt for democracy.”

News articles often point to the extremists in the protests. “Recently, a demonstration by the ‘Querdenken’ [‘lateral thinking’] alliance in Stuttgart escalated; last year, a mass protest in Leipzig got out of control,” Spiegel Online reported on March 15. “In addition to coronavirus deniers, violent right-wing extremists and Reich citizens took to the streets. Now ‘lateral thinking’ could come into the sights of the constitutional protection authorities.”

When asked about the protesters at the Reichstag building, spokesman on Domestic Policy of the Free Democracy Party Konstantin Kuhle said that he understands some of the frustrations with losing one’s job, but “[i]f you promote … that Germany is on the way to a dictatorship or something similar, that’s not acceptable.” If you do believe that, then Kuhle said you share common ground “with extremist tendencies that have nothing good in mind.”

Anyone who criticizes Berlin’s recent power grab is joining forces with the extremist far right. This is a dangerous argument to delegitimize citizens’ concerns.

“It is true that right-wing extremists are also part of the protest movement,” Berliner-zeitung.de noted on April 14. “However, according to the assessment of the constitutional protectors, they do not exert a ‘controlling influence.’ According to the ard reports, the observation focuses on members of the protest movement who spread conspiracy theories and agitation. According to Berlin’s Office for the Protection of the Constitution, this is a ‘new form of extremism’ that does not fit into existing categories.”

While criticizing the government’s coronavirus response is popular among right-wing radicals, it is also a concern to millions of citizens who have lost their jobs, been isolated from family, or fear a permanent loss of their freedom. To put all those people in a general suspicion is undemocratic and violates freedom of speech. Furthermore, it is outrageous to point to government-paid scientists or the government-funded World Health Organization to dismiss all dissenting voices.

In reference to Stalinism, historian Leonard Schapiro warned that “the true object of propaganda is neither to convince nor even to persuade. But to produce a uniform pattern of public utterances in which the first trace of unorthodox thought reveals itself as a jarring dissonance.”

That’s what we see in Germany today. Millions of people believe that the lockdowns forced on the world are a disaster. They don’t necessarily deny the existence of the coronavirus, but they believe the crisis has been abused by the government to expand its power and suppress the people. If you have those thoughts, however, the government wants you to believe that you are alone or in the company of right-wing radicals. You may even find yourself under surveillance.

Germany is increasingly moving in the direction of a dictatorship. This shocking development was prophesied in the Bible. “And in the latter time of their kingdom, when the transgressors are come to the full, a king of fierce countenance, and understanding dark sentences, shall stand up” (Daniel 8:23).

In Nahum—An End-Time Prophecy for Germany, Trumpet editor in chief Gerald Flurry warned in detail about Germany’s future under this rising dictatorship. One man is prophesied to take control of Germany and all of Europe in a radical way. Recent events will make this power grab all the more easy for him.

The centralization of power in Germany is something you need to watch closely.

Ms. Merkel’s first step to combat the health crisis was centralizing government power in Berlin. Now she wants to do something similar for the European Union. “Chancellor Merkel wants to give Brussels more powers in the area of health,” n-tv.de reported. “This, she says, is a lesson learned from the coronavirus crisis. EU treaties could also be amended for this purpose.”

While the current argument concerns borderless lockdowns and the distribution of vaccines, it could be a common climate change agenda tomorrow and a common military budget the following week. All these proposals have been years in the making, but Brussels lacks the power to enforce them in a meaningful way. The coronavirus has shown us how this could suddenly change when a crisis emerges.

When Otto von Bismarck came on the scene in the 19th century, he saw the German nation suffering under a state of territorial disunity and internal political discord. The Franco-Prussian War (1870–1871) was the initial glue that united Germany. By the end of his reign, Bismarck had forged the German Reich into continental hegemonic power that was able to start two world wars mere decades after his death.

While Bismarck was hailed as Germany’s savior, he also laid the groundwork for multiple wars.

After World War ii, Germany’s Basic Law reestablished a balance of power between the state and the federal government.

Daniel 2 prophesies that the last human kingdom to govern this world prior to the return of Jesus Christ will be a mixture of miry clay and iron. Inspired by God, Daniel explained in verse 42: “And as the toes of the feet were part of iron, and part of clay, so the kingdom shall be partly strong, and partly broken.” Ten nations will unite as a superpower ruling this Earth for a short time. As we have long warned, this superpower will be led by Germany.

Due to European rivalries and mixtures of different peoples, the greatest weakness of this superpower is its lack of unity. In our Trends article “Why the Trumpet Watches Europe’s Ongoing Unification Project,” we noted:

The Trumpet forecasts that Europe will unite and it will become a formidable global dynamo. The unity Europe attains will not be perfect, it will not come about easily or peacefully, and it certainly will not endure. But Europe is going to become a united superpower and a serious, daunting global power. The emergence of this new Europe will have far-reaching and dramatic consequences for us all.

I encourage you to read that Trends article to understand the Trumpet’s Bible-based forecast and to see how events in Europe are shaping up in line with it.

Notice how the Daniel 2 prophecy ends: “And in the days of these kings shall the God of heaven set up a kingdom, which shall never be destroyed …” (verse 44). “These kings” refers to 10 kings currently rising in Europe. This final European superpower will unite for only a short time, and their reign will end with the return of Jesus Christ. We are about to see an end to the world’s failed attempts to govern itself. To learn more about these stunning prophecies, request a free copy of our reprint article “Germany—A New King Is Imminent.”