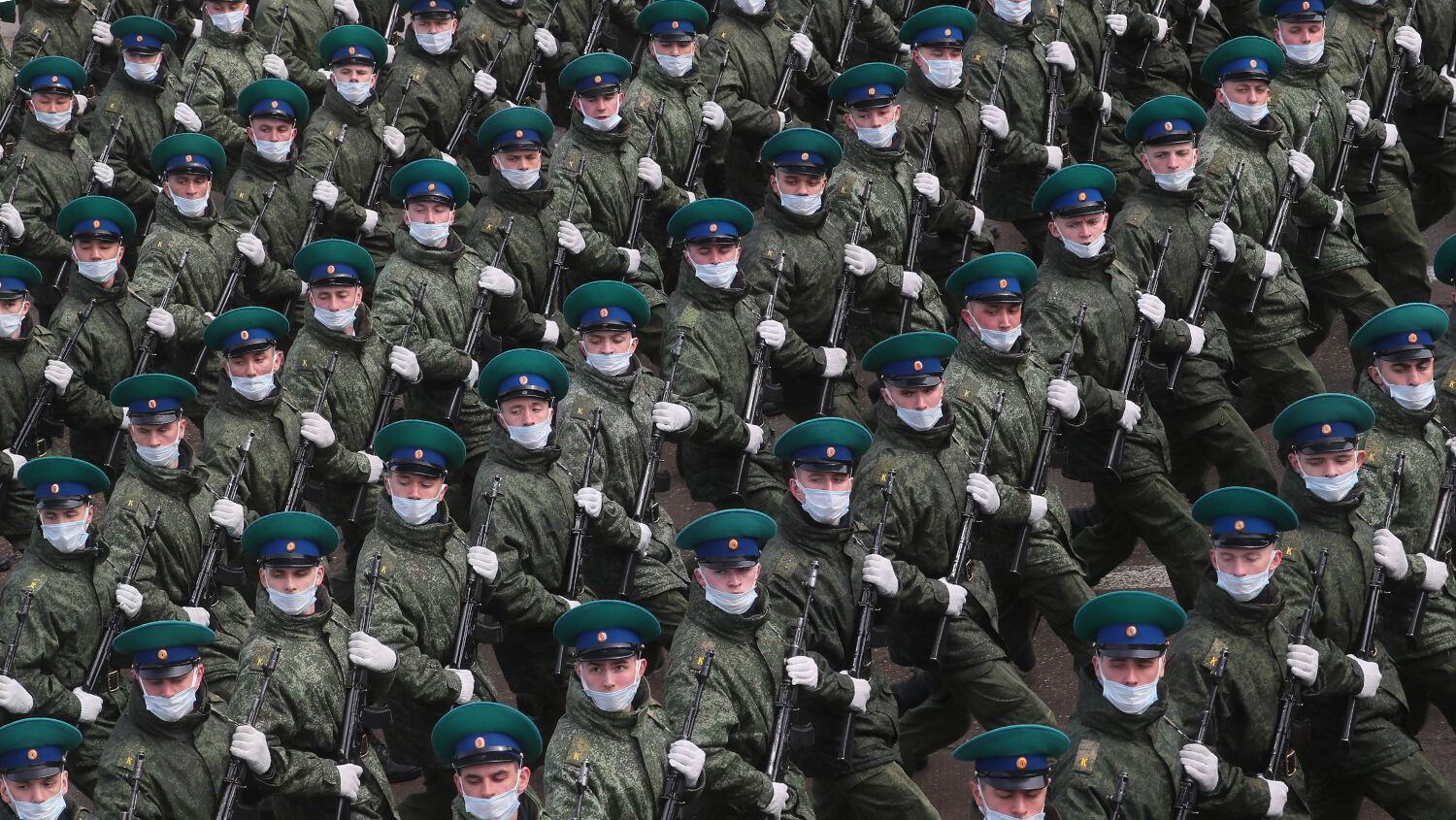 Servicemen march in formation during a rehearsal for a Victory Day military parade in Red Square.
Alexander Shcherbak\TASS via Getty Images

If attacks on Ukraine and Taiwan were coordinated, how effectively could the United States military respond?

While Russia continues amassing military forces near Ukraine, China is increasing its aggression against Taiwan to an alarming degree. The concurrent developments are raising fears about how the United States military could respond to two simultaneous invasions.

Russian President Vladimir Putin has been building up forces at locations near the Ukrainian border since last month. More than 110,000 Russian soldiers are now amassed in Crimea and near the Donbas region, marking the largest Russian buildup since 2014. That was the year Putin invaded and annexed Ukraine’s Crimean Peninsula and ignited a conflict in Donbas that has so far claimed 14,000 lives.

The present deployment of Russian forces includes 3,700 drones, 1,300 battle tanks, 1,300 artillery and mortar units, and close to 400 multiple launch rocket systems, according to documents leaked to the Daily Mirror. The deployment also includes a number of assault vehicles painted with “invasion stripes.” These patterns are painted on units intended for an initial push into another nation’s territory to help prevent friendly fire.

On April 16, Russia announced that it was suspending other nations’ access to parts of the Black Sea for at least six months. This could block naval backing from Ukraine’s partner nations and hinder Kiev’s access to vital ports in the Sea of Azov. On April 20, Russia expanded the restrictions to include blocking flights over sections of Crimea and the Black Sea.

NOTAMs (red) & NOTMARs (yellow) that #Russia issued in connection to its military exercises in the Black Sea. Most “danger areas” are in effect until end April. Passage through #Kerch strait is restricted, especially for “foreign warships”, until 31 Oct (purple). pic.twitter.com/rVNKypGx2V

In Putin’s annual address to the Federal Assembly on April 21, he threatened to secure Russia’s interests with actions that are “asymmetric, fast and tough.”

It is possible that Putin is only posturing to play to a domestic audience or to exert pressure on Ukraine, but the buildup may signal that a military invasion is imminent.

European Union foreign policy chief Josep Borrell said with such large troop numbers amassed, it would take only “a spark” to trigger confrontation.

Dmitri Trenin, the head of the Moscow Carnegie Center, said last week: “Let’s face it: Regional war in Europe is again thought of as a possibility on both sides, and this should not make anyone happy. Even in the U.S., because such a war will not be limited to the Old Continent.” He added: “Fasten your seat belts.”

Meanwhile, some 5,000 miles from Ukraine, Putin’s Chinese counterpart, Xi Jinping, is significantly ramping up military aggression against Taiwan. On April 11, a foreboding record was broken when China flew 25 warplanes into Taiwan’s air defense identification zone, including J-16 fighter jets and H-6K bombers. The previous record had been set just two weeks earlier when the Chinese flew 20 warplanes through Taiwan’s airspace.

Taiwanese officials have acknowledged that their much smaller air force is under considerable strain to keep up with the Chinese incursions, which happen on an almost daily basis. “We are considering the war of attrition issue,” Taiwan’s deputy defense minister, Chang Che-ping, said last week.

And China’s air force provocations coincide with months of increasing maritime incursions, with Chinese warships trespassing into Taiwanese waters and sections of the South China Sea.

“Taiwan area ship 1105, Taiwan is part of China; the Taiwan area has no navy.” “My navigation here is in accordance with Chinese law. Out,”. https://t.co/jBt8EVLWYq

Ever since Taiwan separated from China in 1949, the Chinese have actively claimed ownership of what they view as a “rebel province.” The Chinese Communist Party has staked its reputation on a pledge to bring the island into the Communist fold. And Xi has never been anything but direct regarding his willingness to use military force to do so. So far, Taiwan has remained independent thanks to armaments, political support and pledges of military backing from the United States.

If Xi acted on his threat to use force, would the war-weary U.S. mobilize against its number one trade partner? Does the Biden administration place a high enough value on Taiwanese freedom to spill American blood protecting it? The increase in Chinese aggression is largely intended to answer those questions.

“The signal given by the military drills,” a Chinese government spokesman said last week, “is that we are determined to stop Taiwan independence and stop Taiwan from working with the U.S. We are doing it with action.”

Either of these developments would be worrying enough alone. But the fact that Russia and China seem to be coordinating their pushes against their neighbors significantly compounds the potential combustibility. And it significantly complicates potential U.S. responses.

The United States still operates the world’s largest and most powerful military by a considerable margin. But a landmark report by the Heritage Foundation in 2019 found that if two major conflicts erupted simultaneously, the U.S. may not be able to muster an adequate response.

For this reason, former U.S. Army Lt. Col. Daniel Davis said a two-front war with Russia and China, over Ukraine and Taiwan, would be the “absolute worst-case scenario for U.S. security.”

He wrote: “Since World War ii such a possibility has been so remote as to warrant little serious consideration,” but we are now facing “the nightmare scenario of squaring off against Moscow and Beijing simultaneously.”

He continued: “If both Russia attacked eastern Ukraine and China fought for Taiwan, President Biden would be faced with a … horrifying dilemma: choose to engage in a battle that could leave our Armed Forces fatally gouged or face humiliation by refusing to fight in the face of aggressive forces.”

‘The Third Part of Men’

We can’t be sure what will happen with Ukraine and Taiwan in the next few weeks or months. Maybe the current shows of force are only saber-rattling that will soon subside. But Bible prophecy—mainly in the books of Ezekiel, Daniel, Jeremiah, Joel and Revelation—shows that Russia and China will soon play a major role in the third and final world war.

These two Asian juggernauts will be allied together in that war and lead an Asian superpower that Revelation 16:12 calls “the kings of the east.” This power will destroy on a level that is far beyond anything in history. Revelation 9:15-16 show that it will field an army of 200 million troops, and that its violence will “slay the third part of men.”

In light of these scriptures, it is sobering to see Russia and China today growing steadily more powerful and more belligerent. This trend now well underway is leading to a dark and violent future. But the Bible makes clear that these developments are also connected to the most hope-filled news imaginable.

To understand more about Russia and China’s role in end-time prophecy and about the profound hope that is at the heart of the Bible’s forecasts, order your free copy of Russia and China in Prophecy.