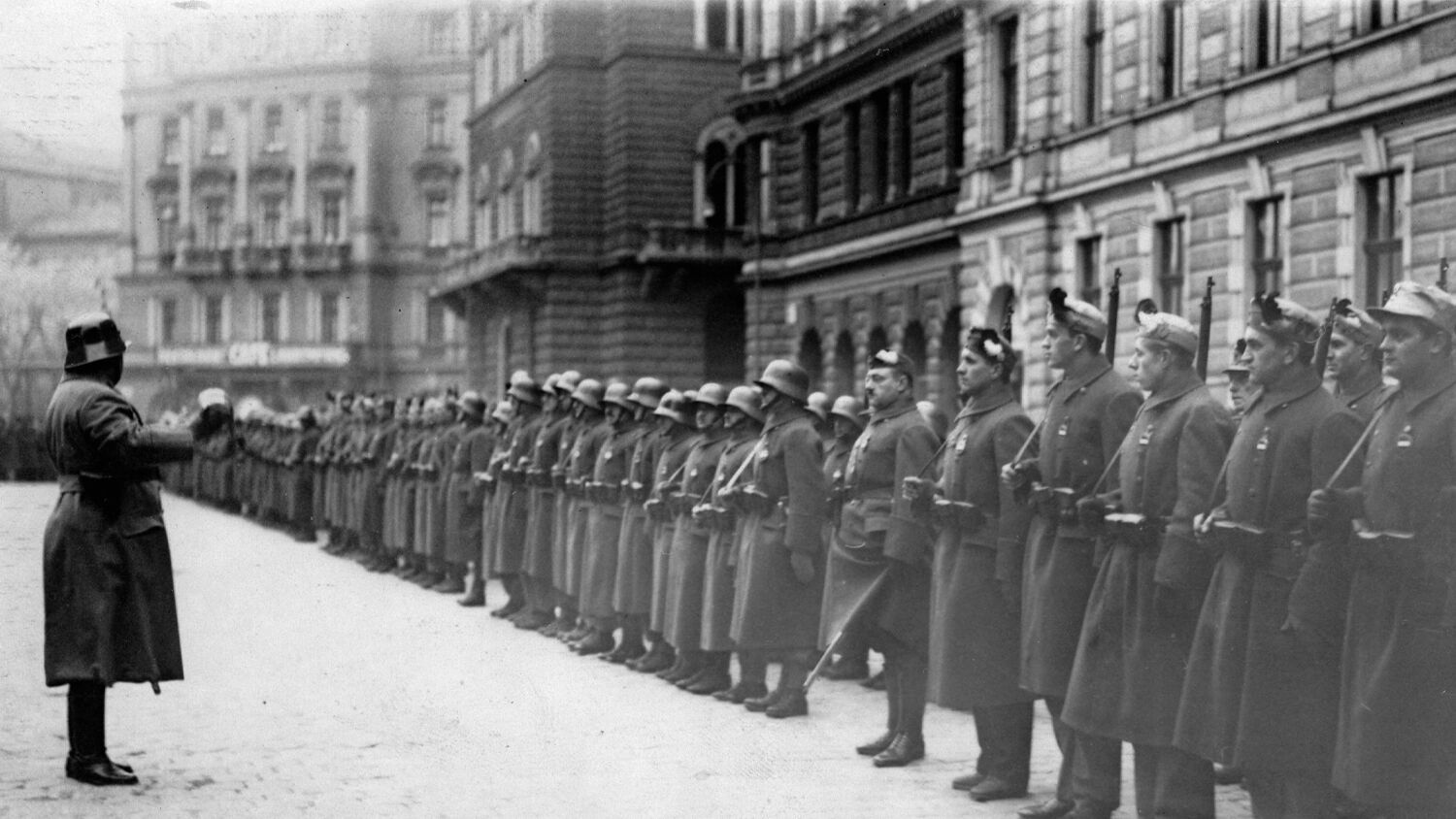 Members of the Austrian “Heimatschutz” line up before their daily morning exercises around 1930.
Imagno/Getty Images

On April 6, the German armed forces launched a new volunteer service with the controversial title Heimatschutz (meaning protection of the homeland or the national heritage). The new volunteer service will start with 325 recruits, but it has already received more than 9,000 applications. The program is designed to train forces for domestic crises and disaster operations, such as those currently needed in the coronavirus pandemic. The service’s motto is, “Your year for Germany.”

The service consists of seven months of military training followed by various reservist assignments that are spread over the course of six years. In the first year, 1,000 men and women are to be trained.

German Defense Minister Annegret Kramp-Karrenbauer said many young people want to commit themselves to the country, making the number of applicants significantly higher than expected. The name Heimatschutz was deliberately chosen, she said: “It’s not a mistake to call this service that …. [The] mistake was to leave the term homeland to the right wingers in this country.”

After Interior Minister Horst Seehofer added the Heimat Ministry to his responsibilities in 2018, Deutsche Welle wrote:

The closest equivalent, “homeland,” is unsatisfying as it lacks the emotive connotations. Heimat is a word that is meant to do more than just denote territorial integrity—it evokes a sense of place and homeliness. Certain landscapes, certain foods or certain traditional clothing might be associations for nationalistically minded Germans when they hear Heimat. It is a word that is supposed to swell the German heart. …

The word used to have darker connotations, and it was likely to make Germans of the postwar generations roll their eyes. The Nazi regime linked Heimat to the nation-state, which meant that many politicians avoided the word—along with its adjective derivation, heimisch—after World War ii.

Heimatschutz, in particular, harkens back to the cruelty of the Nazi regime. Protecting the homeland was a crucial part of Nazi propaganda. Today, the refugee crisis has aroused in many far-right groups a strong sense of wanting to protect the homeland from foreign intrusion.

Some may argue that there is nothing wrong with going on the offensive to recapture the term Heimat. But if you consider the German Army’s postwar founding, repurposing the term is concerning.

Our free booklet Germany and the Holy Roman Empire explains:

In his book [Watcher on the Rhine], Brian Connell sums up the ridiculous situation that developed after World War ii. He wrote that in the spring of 1947, “The vexed problem of denazification, which had been handled up to that time by the Allied authorities, was handed over to the Germans.” Just two years after their defeat, the Germans were actually told to denazify themselves! …

Several other historical documents released in more recent years add to Connell’s evidence that the Germans failed to denazify themselves. In 1991, Mark Aarons and John Loftus released a book titled Unholy Trinity, which told the story of how Vatican-sponsored underground networks illegally smuggled Nazi leaders out of the country after the war. Aarons and Loftus based their findings on newly released U.S. intelligence documents that had been classified for almost 50 years.

In this context, the use of Heimatschutz appears in a completely different light. German militarism is reemerging.

To prevent a resurgence of Nazism in the army, the military has been put under the leadership and supervision of the Defense Ministry and parliament. But after decades of seeking to integrate the army back into society, we have seen the army’s Nazi spirit reemerge. The officer corps has pushed its ideas on the democratic leadership and exerted great effort in seeking to cover up right-wing scandals. Every part of the army has been affected, and even the intelligence services responsible for investigating the military have been compromised. (Read more about this trend and history in our article “Why Does Germany Have So Many Neo-Nazi Conspiracies?”)

The Defense Ministry may sincerely think it has overcome the army’s right-wing problem, but it has been dealing with only the tip of the iceberg, the most blatant extremists, while giving in to the pressure of the vast majority.

The Nazis’ plan to go underground and reemerge has been successfully executed.

The late theologian Herbert W. Armstrong warned: “We don’t understand German thoroughness. From the very start of World War ii, they have considered the possibility of losing this second round, as they did the first—and they have carefully, methodically planned, in such eventuality, the third round—World War iii! Hitler has lost. This round of war, in Europe, is over. And the Nazis have now gone underground. In France and Norway they learned how effectively an organized underground can hamper occupation and control of a country. Paris was liberated by the French underground—and Allied armies. Now a Nazi underground is methodically planned. They plan to come back and to win on the third try.”

Mr. Armstrong based this prediction on Bible prophecy. “The beast that thou sawest was, and is not; and shall ascend out of the bottomless pit, and go into perdition: and they that dwell on the earth shall wonder, whose names were not written in the book of life from the foundation of the world, when they behold the beast that was, and is not, and yet is” (Revelation 17:8).

As explained in Germany and the Holy Roman Empire:

The Greek word for “bottomless pit” is abyss, which means underground. That means this great empire has continued to survive from the original Roman Empire; it has just been “underground” at times. There have been valleys in between the mountain peaks. The last seven heads, or resurrections, were prophesied to be guided by a great church. That is how church and state get the name “Holy” Roman Empire.

The sixth head ascended out of the underground. That means most of the world was ignorant of its existence. After it was defeated by the Allies in World War ii, it went back underground where it began deceitfully working to regain power over the world. There is no final defeat in their thinking. A defeat is only a setback in their goal of world domination!

I encourage you to request and read Germany and the Holy Roman Empire to understand the full prophetic context of these events.