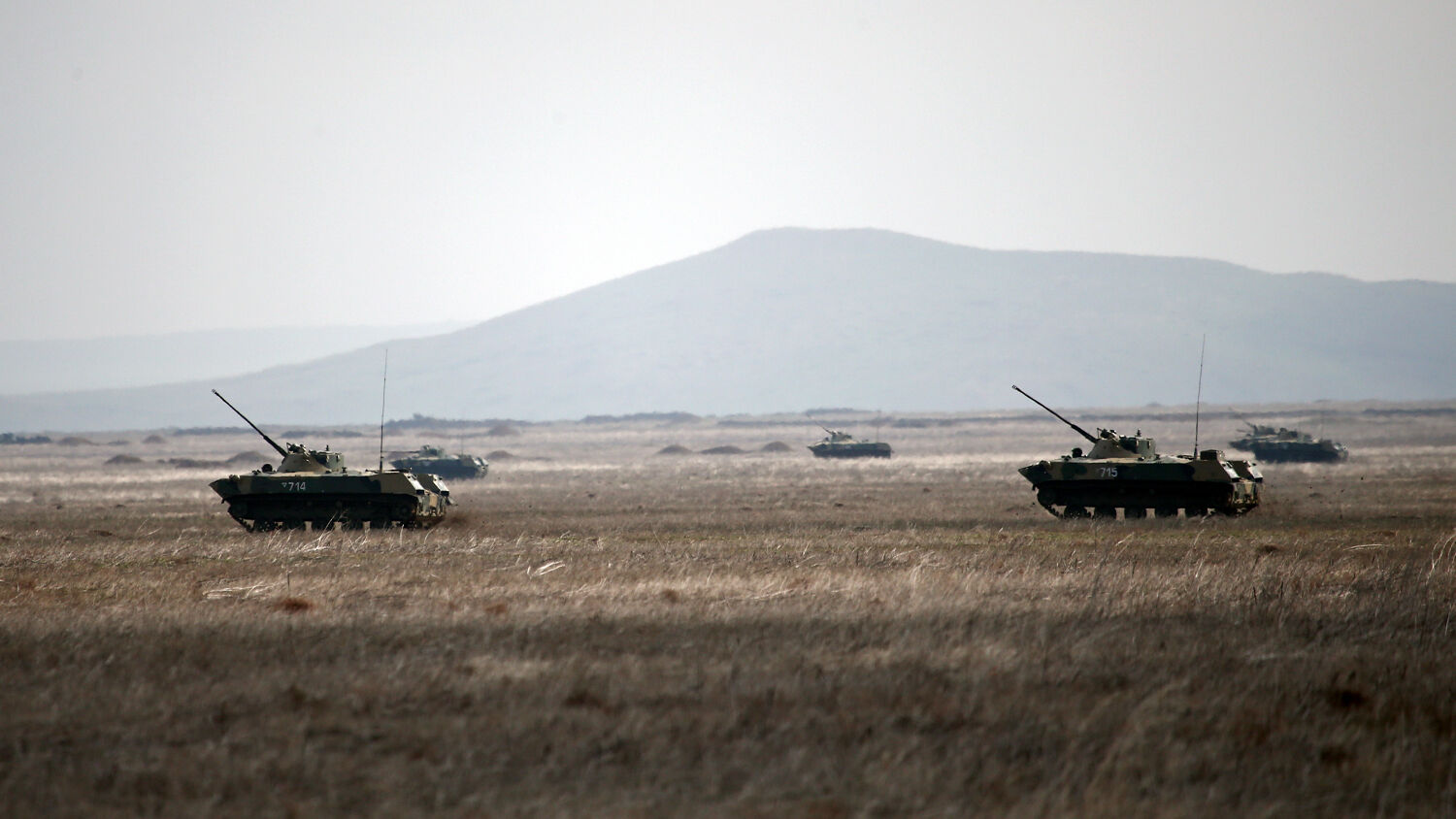 Russian troops amassing at Ukraine’s border have prompted fears that invasion could be imminent. According to the Ukrainian government, at least 40,000 soldiers—in addition to tanks, rocket launchers and long columns of trucks and armored vehicles—are either on their way to the border or already stationed there. Another 40,000 Russian soldiers are said to have assembled at the Crimean Peninsula.

European foreign affairs envoy Josep Borrell posted on Twitter on April 4, following a phone call with Ukrainian Foreign Minister Dmitry Kuleba, that the EU supports “Ukraine’s sovereignty and territorial integrity.” A joint statement from the German Foreign Ministry and the French Foreign Ministry reads: “We are monitoring the situation very closely, in particular the movements of Russian troops, and call on the parties to exercise restraint and immediate deescalation.” Insurgents have controlled parts of the Donetsk and Luhansk regions along the Russian border for nearly seven years, but the EU has done little to help.

“If you look at the foreign-policy situation,” Konstantin Skorkin, Ukraine expert at the Moscow-based Carnegie Endowment for International Peace think tank, noted, “it’s a kind of gunboat diplomacy, a show of military might to get Ukraine to make concessions.”

“But how can the West help Ukraine at all in this explosive situation?” Germany’s Die Welt asked. “Zelensky makes clear demands. He made it clear to Stoltenberg during the telephone conversation that joining nato, which has long been demanded, is the ‘only way’ for peace. But Stoltenberg’s hands are tied. The alliance continues to reject Ukraine’s accession because it does not want to provoke Moscow” (Trumpet translation throughout).

In other words. the West is willing to sacrifice Ukraine to avoid a confrontation with Russia. A similar method of failed appeasement took place in the lead-up to World War ii, when British Prime Minister Neville Chamberlain promised peace to Czechoslovakia and Poland. But promises alone can never bring or sustain peace.

In a phone conversation with Zelensky, United States President Donald Trump said in 2019: “I will say that we do a lot for Ukraine. We spend a lot of effort and a lot of time. Much more than the European countries are doing, and they should be helping you more than they are. Germany does almost nothing for you. All they do is talk, and I think it’s something that you should really ask them about. When I was speaking to [German Chancellor] Angela Merkel, she talks Ukraine, but she doesn’t do anything.” Zelensky responded saying: “Yes, you are absolutely right. Not only 100 percent, but actually 1,000 percent.”

Ukrainian Prime Minister Denys Shmygal warned in an interview with Handelsblatt on March 21 of the consequences of the Nord Stream 2 gas pipeline, which is currently under construction between Russia and Germany. “If Nord Stream 2 goes into operation, Russia will generate higher revenues, which Moscow will use, among other things, to finance its aggression against Ukraine.”

While Germany promises its support for Ukraine, it is filling Russia’s coffers. In 2008, Trumpet editor in chief Gerald Flurry warned: “I believe that Germany’s leaders may have already agreed to a deal with Russia, a modern Hitler-Stalin pact where Germany and Russia divide countries and assets between themselves.”

History shows that in between wars, Germany and Russia often work together. Most infamously, just before World War ii, the two made a deal in which Adolf Hitler’s Germany basically said to Joseph Stalin’s Russia: Stay out of it, Russia, and we will take over Europe. Then the two of us can split up Poland and other countries between ourselves.

Around the time that deal was made, Stalin thought he and Hitler were close comrades who could trust each other. But after Hitler realized he wouldn’t be able to conquer Britain, he decided to break the deal and attack Russia. This shattered Stalin’s worldview! Stalin didn’t expect it. But if he had read what Hitler had written in Mein Kampf long before they made the deal, he would have known Hitler had plans to conquer Russia as well.

Because Germany ended up betraying Russia, some Germans, to this day, believe that Germany owes something to Russia to make up for this betrayal. “In Germany itself, there is a strong political current that promotes a sympathetic attitude toward Russia, not least because of the crimes committed during World War ii,” Handelsblatt wrote. “These politicians believe that the West has provoked Moscow with its nato expansion to the Russian border.”

Germany’s efforts to reconcile with Russia should be a strong warning for the whole world. To understand the urgent prophetic significance of Germany sacrificing Ukraine to Russia, I encourage you to read Mr. Flurry’s article “Germany and Russia’s Secret War Against America.” Also order a free copy of Mr. Flurry’s booklet The Prophesied ‘Prince of Russia,’ in which he explains the prophetic angle of Russia’s growing aggression. He also shows how Germany’s cooperation with Russia will ultimately end.