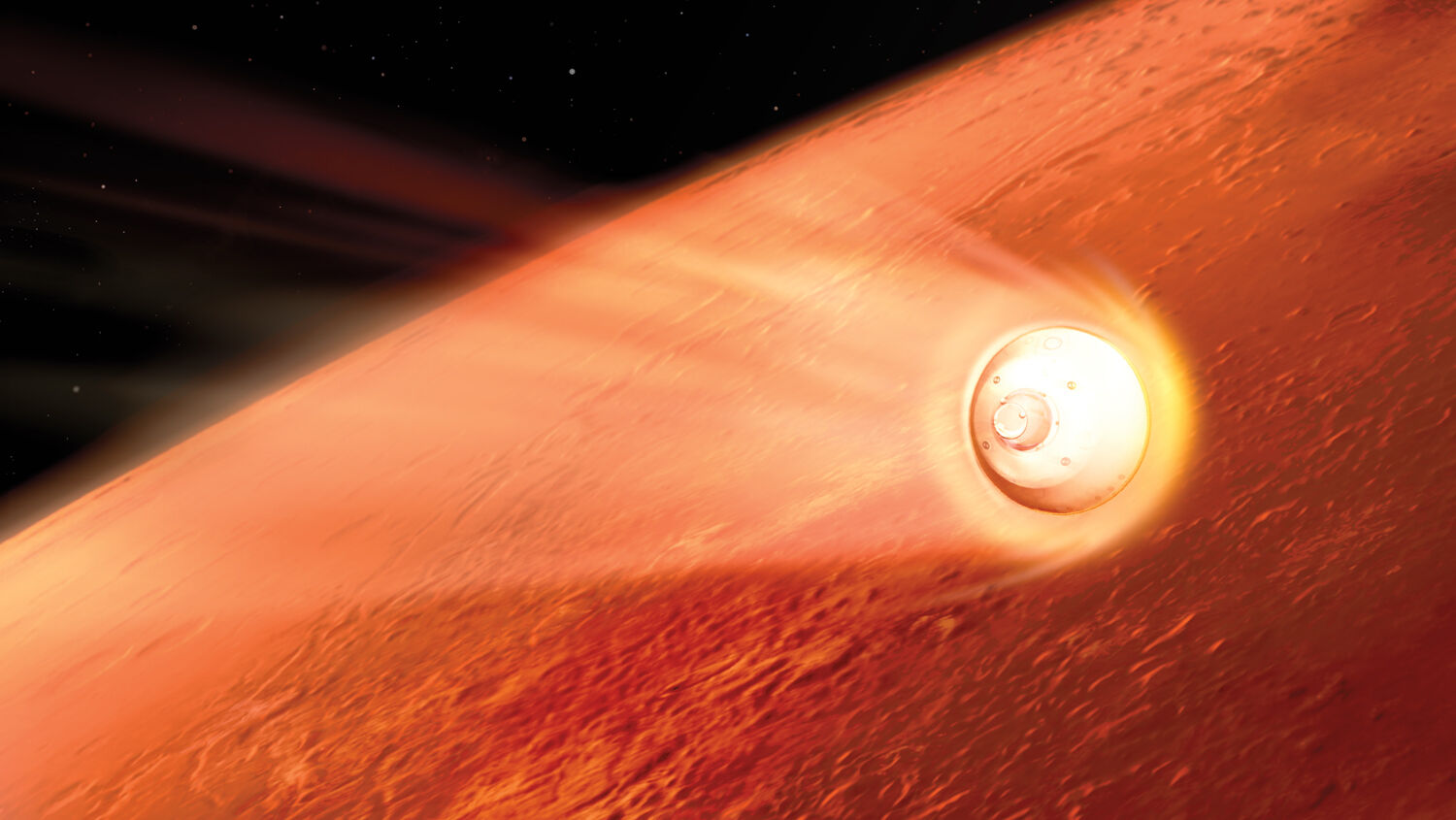 The spacecraft carrying Perseverance slows down as it enters Mars’s atmosphere.
Nasa/JPL-Caltech

Nasa landed a nuclear-powered robot car with a rock-zapping laser on the surface of another planet using a sky crane. It sounds like science fiction. It’s actually science history. It happened for the first time in 2012, and then again on February 18 this year. This kind of mission is almost becoming routine. And the most recent one carried a helicopter.

There is intelligent life after all—it’s here on Earth.

Nasa’s Perseverance traveled 293 million miles, the equivalent of driving around the Earth’s equator nearly 12,000 times. As it neared Mars, it was traveling at 12,500 miles an hour—fast enough to fly from London to New York in just over 15 minutes. Entering the Martian atmosphere, its heat shield was blasted with temperatures higher than 2,600 degrees Fahrenheit.

To land safely, Perseverance had to decelerate from 12,500 miles an hour to a standstill in seven minutes—without damaging its robotic arm, spectrometer, cameras, weather station, ground-penetrating radar, laser or other equipment. Radio signals from Perseverance take 11 minutes to reach Earth, so the landing had to be completely automated. Scientists wouldn’t even know that Perseverance had hit the atmosphere until four minutes after it had already touched down—or crashed.

The atmosphere slowed the rover down to “only” 1,000 miles per hour. Then the craft deployed its parachute. Still traveling faster than the speed of sound, the 70-foot-wide chute deployed, slowing the streaking craft down to 200 miles per hour.

The Perseverance rover also had to select its own landing site—with no time to get any input from humans. Its target, the Jezero crater, has not hosted a Mars rover before—it’s too rocky for one to land. As Perseverance got closer to the ground for the boulders and cliffs to become visible, computers scanned and found a patch of ground smooth enough for it land.

Once the rover was 6,900 feet above its selected landing zone, it jettisoned, and then dodged, the parachute and fired up its eight rockets—slowing its descent further. But the rover couldn’t land using the rockets: The dust cloud would have damaged its instruments. Instead, a sky crane held aloft by rockets floated above the ground and lowered Perseverance down by tethers onto the Martian surface.