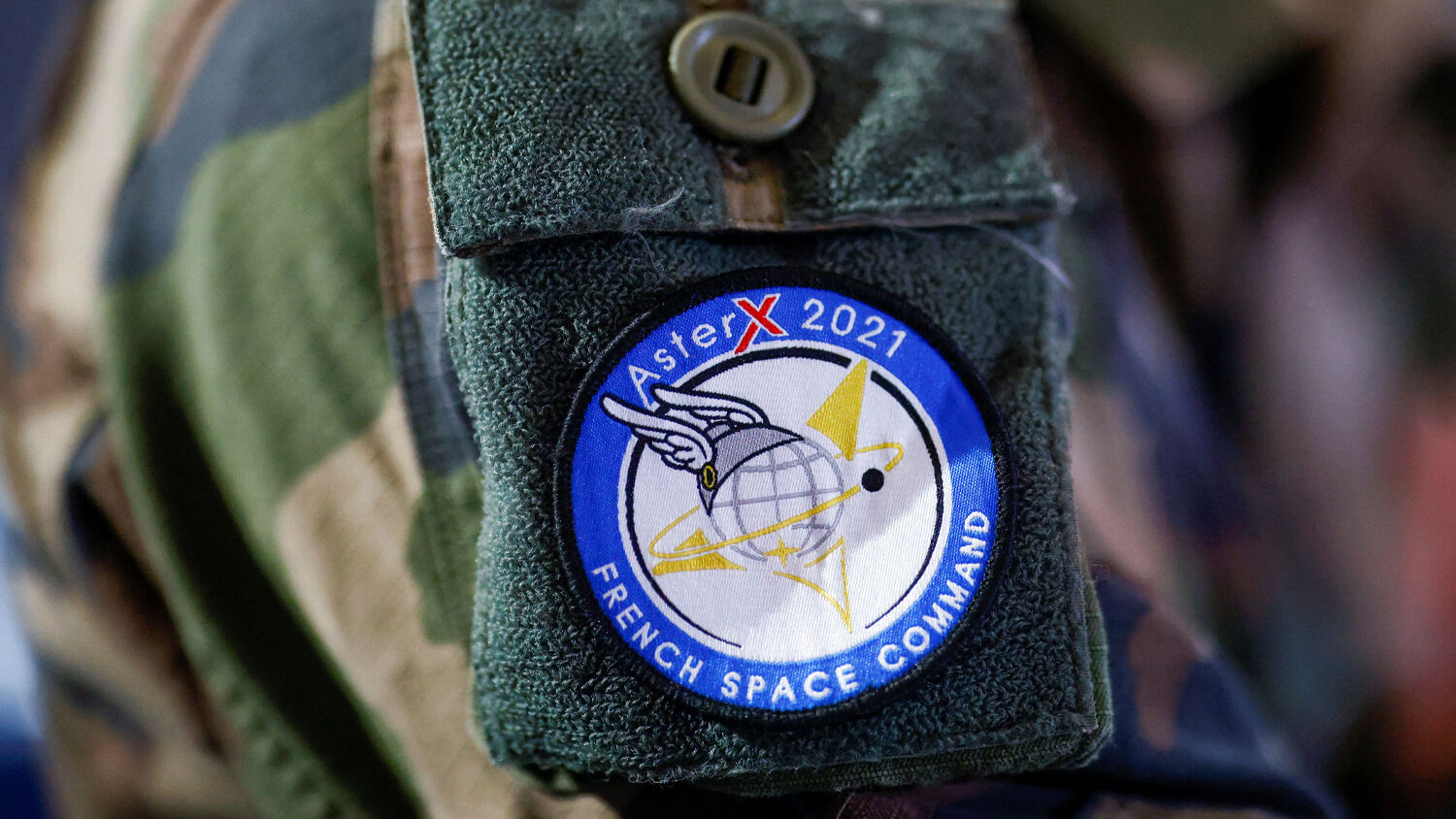 A patch of “AsterX 2021” is seen at the French National Space Agency as France hosts the first space situational awareness experiment in Europe, code-named “AsterX 2021,” on March 12.
STEPHANE MAHE/POOL/AFP via Getty Images

Concern over Russia and China is pushing Europe to contemplate war in space.

France conducted its first-ever military space exercise from March 8 to 11. The space force was tasked with protecting French satellites against threats from foreign powers. French leaders see their space force as a defense against Russian and Chinese militarization of space, but offensive space weaponry is also being developed.

The exercise was held in cooperation with Germany and the United States, both of which have a military space command. It presented a crisis with “another foreign power possessing a considerable space force,” according to Deutsche Welle. Eighteen different threat situations were tested, from missile and jamming attacks on French satellites to weathering solar radiation storms and predicting the path of debris falling to Earth.

Only the U.S., Russia, China, France and Germany have military space programs. This leaves Russia or China as the aggressive “foreign power.”

After France launched its space force in 2019, French Defense Minister Florence Parly cited Russian militarization of space as a reason for its creation, referring to a 2017 incident in which a Russian satellite spied on messages from a Franco-Italian army communication satellite. Parly also expressed a policy of independence from the U.S., saying in July 2019, “If we want to be able to carry out real military operations in space, then we need to develop the ability to act alone.”

Aware that events in space could determine the outcome of future wars, France is developing its technology accordingly. It aims to become the world’s third-largest space power. Parly said in September 2019 that French satellites would be protected “in an active manner.”

“If our satellites are threatened,” she said, “we will consider dazzling those of our adversaries. We will reserve for ourselves the time and means of the response: It may involve the use of power lasers deployed from our satellites.”

Russian antisatellite missile programs date back to the Cold War. The country has also produced militarized satellites, which have made close approaches to European and American surveillance satellites, showing off their capability to interfere or cause damage.

China, too, has been testing antisatellite missiles since 2007. Some of these can reach 18,641 miles above Earth, where military surveillance satellites often operate. For comparison, the International Space Station flies at an average altitude of almost 250 miles.

“A new Russia has just been born,” wrote Trumpet editor in chief Gerald Flurry after Vladimir Putin became the nation’s president in 2004. Mr. Flurry wrote that under Putin, Russia would regain its place as a superpower, and make European leaders nervous in the process. Time has proved this forecast correct. Russia’s invasion of Georgia and its later annexation of Crimea helped push Europe to invest in its own defense.

“Russia’s bold moves are triggering a fear that will hasten the uniting of the European Union,” we write in Russia and China in Prophecy. “This fear will cause Germany and other European nations to want stronger leadership. Throughout history, Germany has often sought a strong leader. Bible prophecy says it will do so again—for the last time!”

Today, that prophecy is visible on the world scene more than ever. Europe is rearming. Daniel 11 shows that it will soon have a strong leader who is not afraid to use that power. But its first target will not be Russia or China. Many prophecies warn that it will use this power to attack the United States, Britain and the Jewish state.

During the Second World War, Adolf Hitler feared Russia’s military power. This was one reason he made a pact with Joseph Stalin to keep Russia out of the war until the time of his choosing. Hitler’s Nazi Party often used the threat of Russia and its Communist system as justification for militarizing the country and cracking down domestically.

Will Europe repeat this history? Will a militarized Europe decide to attack America and Britain again, cooperating with Russia for a short time? Bible prophecy says this is imminent. For the answers, which only Bible prophecy can provide, read “Russia Frightens Europe—and Fulfills Bible Prophecy” from our free booklet Russia and China in Prophecy.