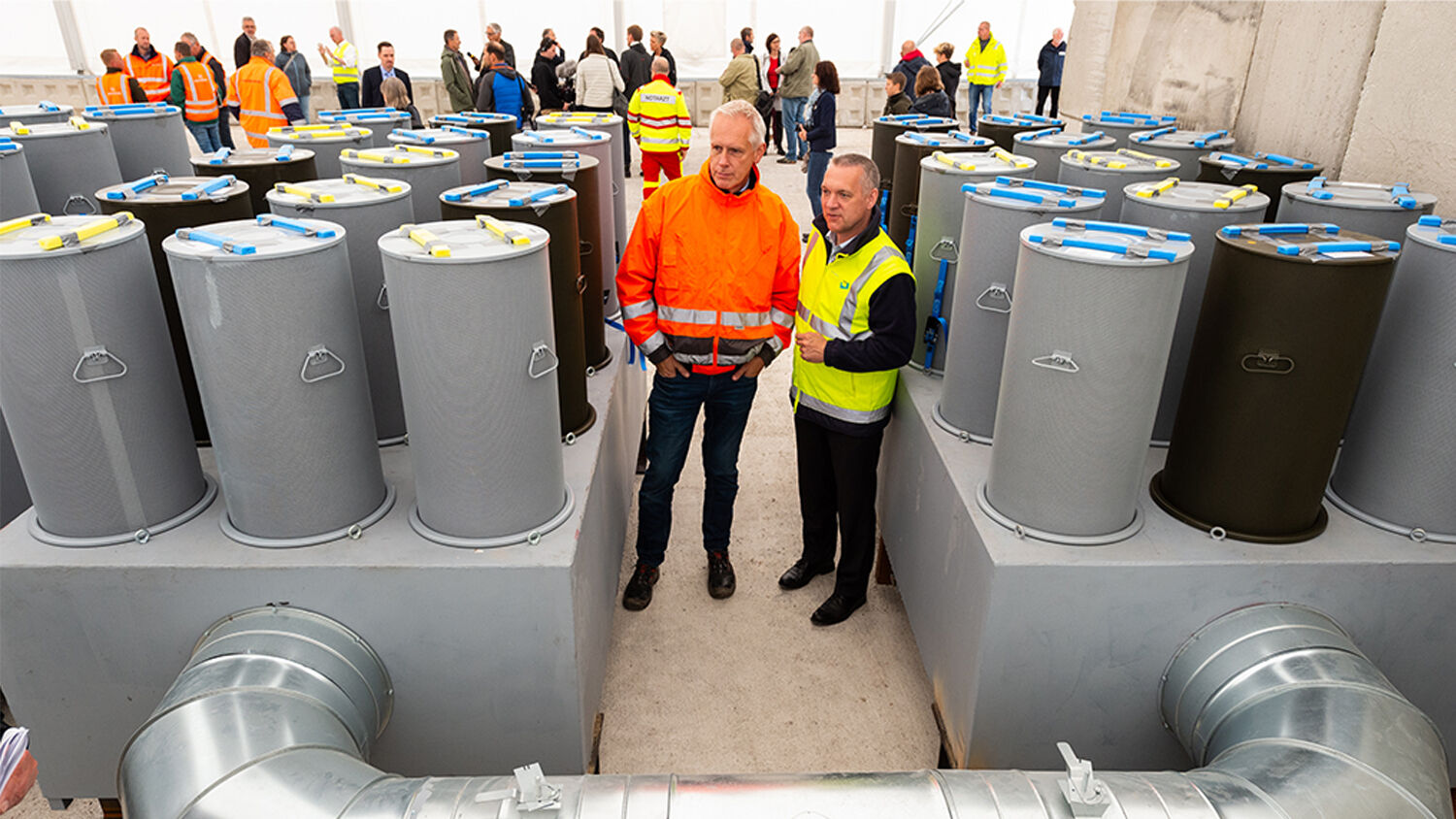 Frank Biegansky and Andreas Krüger talking alongside an air filter system for NBC warfare agents after the discovery of remains of chemical warfare agents in the groundwater near Munster.
Photo by Philipp Schulze/picture alliance via Getty Images

The United States government imposed new sanctions against 14 entities on March 4 in retaliation for the Alexei Navalny poisoning last year. Most of the listed entities are Russian. Yet three of them are German. Specifically, they’re German chemical manufacturers linked to supplying Russia’s chemical weapons program.

Chimconnect is headquartered in the city of Konstanz, near the Swiss border. It is a subsidiary of Chimconnect AG, a Swiss company also on the new sanctions list. According to North Data, they “trade in laboratory chemicals, laboratory equipment … and laboratory accessories.” It registered as a company in 2014 (the same year Russia annexed Crimea). The company’s managing director is Maria Ivankina, from St. Petersburg. Its website states that its manufacturing units are in Russia and Kazakhstan. It lists its main markets as Russia and other former Soviet countries. Its listed products are nondescript “chemicals,” “solvents” and “organic and inorganic compounds.”

Pharmcontract is based in Frankfurt, Germany’s financial capital. According to North Data, its expertise is in “equipment for the pharmaceutical and chemical industries, development and production of facilities for monitoring and testing in this industry, as well as consumables and chemicals, design of laboratories and establishments in this industry, and advice in this field.” The company registered in 2013, a year before Chimconnect. It appears to be a subsidiary of Pharmcontract Group, an organization based in Moscow. Its managing director is Roman Shestov; before that, it was Ilya Petrov. Oddly enough, North Data lists Pharmcontact as a defunct company, despite appearing on the U.S. sanctions list.

Riol-Chemie is based in Lilienthal, a city bordering Bremen in northern Germany. It was founded in 1998 and listed as having only five employees. Riol-Chemie’s center of distribution is in Russia, and it sells chemical products primarily to Asia. Its products listed on chemeurope.com include innocuous substances like isopropanol and lanolin. But its sales manager is Maria Ivankina, apparently the same person also working for Chimconnect. Lilienthal and Konstanz are in opposite parts of the country. Two other senior employees affiliated with the firm are Igor Rozhenko and Sergiy Venger.

None of the businesses make over €100,000 (us$119,000). So they seem to have a limited clientele. And they all primarily distribute to Russia and other former Soviet states.

It seems these three companies are most likely fronts for Moscow’s chemical weapons program. And it would make sense for them to base themselves in Germany. Germany has been a pioneer in chemical research and production for roughly 150 years.

What is more mysterious is why Berlin would let Russia support its chemical weapons program from Germany.

Remember the U.S. sanctions in the context of the poisoning of Russian opposition politician Alexei Navalny.

While organizing protests around Russia against Putin’s rule in August 2020, Navalny was poisoned with a Novichok nerve agent. Many consider Novichock one of the most dangerous chemical families in the world. The Soviet Union developed it as a weapon decades ago.

Surprisingly, Moscow transferred Navalny to a hospital in Berlin for treatment. He stayed in the German hospital for over a month. While in Berlin, he even had a meeting with German Chancellor Angela Merkel.

The Kremlin denies any intentional poisoning. But even one of the scientists who originally developed Novichok points the finger at Russian intelligence.

When Navalny was jailed upon his return to Russia, Germany was quick to condemn Moscow’s actions. Norbert Röttgen, chair of the foreign affairs committee of the Bundestag (German parliament), called for a European Union-wide response against Russian President Vladimir Putin. Berlin has been vocal in demanding for Navalny’s release.

Yet most of this is little more than talk. The EU has made far fewer sanctions on Russia than has America. And the German government even sent the transcripts of its interviews with Navalny to Russia to assist Moscow’s “investigation” in who poisoned him.

Berlin most likely knows full well that these companies are helping Putin develop chemical weapons. So why isn’t it doing anything about it?

Germany is also continuing its support for the Nord Stream 2 pipeline, which will connect Russia and Germany directly via the Baltic Sea. The pipeline will make Germany the main distributor of Russian natural gas in Western Europe. This would allow Moscow to bypass its existing pipelines through Eastern Europe. Poland and Ukraine depend on Russian natural gas for power and receive transit fees. Many worry that Nord Stream 2 would allow Putin to turn the taps off on the existing pipelines. This could pressure East European countries to knuckle under Moscow’s bear paws.

Röttgen has warned that Nord Stream 2 would make Germany too dependent on Russian energy. Yet Merkel has disregarded his complaints and continued the project. This was despite U.S. President Donald Trump halting the project through sanctions.

And it wasn’t only Washington that wanted the pipeline stopped. East European countries like Ukraine, Poland and Slovakia are terrified of the pipeline. Poland and Slovakia are EU and nato member states along with Germany. You would think Berlin would take their views more seriously. Poles have nicknamed the project the “Molotov-Ribbentrop 2 Pipeline.” This refers to the Molotov-Ribbentrop Pact made right before World War ii. The pact was an agreement between Adolf Hitler and Joseph Stalin to divide Poland between their two countries.

The Treaty of Rapallo, signed in 1922, reestablished relations between Germany and Russia. Both countries were pariahs to the Allied powers of World War i, so the treaty was a public slap in the face to the West. Secretly, the treaty allowed Germany to conduct chemical weapons tests in Soviet territory, away from prying eyes. This German-Soviet cooperation started over a decade before the rise of the Nazis. It lasted until Hitler became chancellor in 1933.

Moscow’s companies in Germany are like the Treaty of Rapallo in reverse: Russian chemical weapons development in a nato country.

If one country benefited the most from nato in the Cold War, it was West Germany. It bordered the Soviet satellites of East Germany and Czechoslovakia. You would think it would be the most supportive country in Europe toward nato. Yet both its toleration of Russian chemical companies on its soil and the Nord Stream 2 pipeline undermine the alliance.

Trumpet editor in chief Gerald Flurry wrote in the cover article for the September 2018 issue of the Trumpet, “Germany and Russia’s Secret War Against America”:

America spent billions raising Germany from the rubble of World War ii and billions more keeping the peace in Europe. Germany would not be where it is today without the vast amount of help America supplied. President Trump mentioned this in his remarks on July 11: “[W]e’re protecting Germany, we’re protecting France, we’re protecting all of these countries, and then numerous of the countries go out and make a pipeline deal with Russia where they’re paying billions of dollars into the coffers of Russia.”

Why would Germany be spurning that history? Many elite Germans feel their nation has now gotten all it can from the U.S. and they are ready to move on. Some powerful Germans today are thinking more and more about the Holy Roman Empire, and they want modern Germany to assume more power of its own in the spirit of that empire. They want to establish Europe as a mighty, German-led superpower.

These Germans know that nato is an obstacle to their goal. Back when nato was first founded, its first secretary general, Hastings Ismay, explained its main purpose: “Keep the Russians out, the Americans in, and the Germans down.” The notion of keeping “the Germans down” directly contradicts the imperialistic ambitions that are growing more intense among many elite Germans today.

Since World War ii concluded, America has been the dominant military force in Western Europe. As long as Yankee troops are in the picture, Germany will always be kept “down.” So despite all America has done for Germany in recent decades, Berlin needs to find a way to undermine America’s influence in Europe. And the best way to do that is to cooperate with Russia. The chemical weapons program and Nord Stream 2 are both a part of this strategy.

The last time Berlin and Moscow cooperated was the Molotov-Ribbentrop Pact. And that led to World War ii and the Holocaust.

Berlin and Moscow’s cooperation today is a harbinger for global chaos in the very near future. And America will be right in the cross hairs.