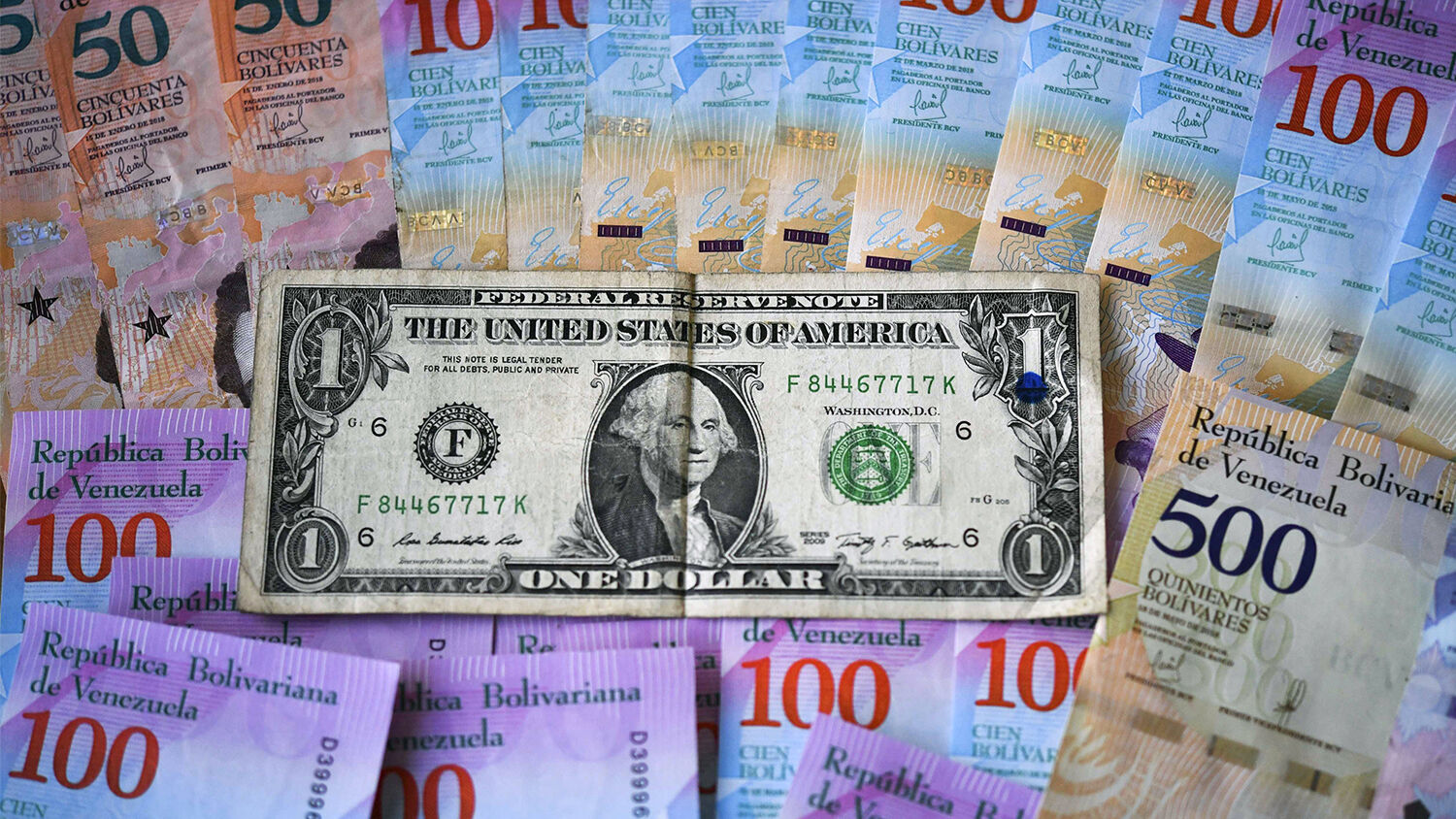 Venezuelan Bolivar banknotes and a US one-dollar bill in Caracas on January 28, 2019.
YURI CORTEZ/AFP via Getty Images)

‘When your outgo exceeds your income, your upkeep becomes your downfall.’

The television show Who Wants to Be a Millionaire? was once popular in the Bolívarian Republic of Venezuela, until the country’s hyperinflation crisis got so bad that a million bolívars became practically worthless. Venezuela’s economy is in such free fall that the Central Bank of Venezuela announced on March 5 that it was introducing a million-bolívar banknote. This new banknote will only be worth about 53 United States cents—about enough for a postage stamp.

Venezuela’s government is planning to move to a fully digital economy, but the transition to a cashless society will not solve its economic problems. It will just make it easier for the government to monitor all financial transactions.

Sen. Rand Paul noted Venezuela’s hyperinflation crisis and warned that the U.S. is on the same path. “New 1,000,000 bolivar note in Venezuela worth 53 cents,” he said in a Twitter post. “Will U.S. be the next Venezuela with Congress borrowing over $6 trillion in one year?” This comment came after the Senate passed a $1.9 trillion covid-19 relief bill.

Utah Senator Mitt Romney echoed Senator Paul’s comments, noting: “We’re going to be asking the American people to allow us to borrow money from China and others, pass that on to our kids and grandkids so that we can send money to states like California and mine that don’t need the money. That doesn’t make any sense at all.”

The late President Hugo Chávez’s socialist policies ruined Venezuela’s economy, prompting the government to raise revenue by printing banknotes. These policies caused the nation’s hyperinflation crisis, and should have been a warning to the world. Yet the covid-19 pandemic has prompted the U.S. and many other nations to make the same mistakes.

In the 14 months since the World Health Organization first declared covid-19 a health emergency, Congress has approved over $4 trillion in coronavirus-relief packages and the Federal Reserve has pumped almost $6 trillion into the economy. Such deficit spending and money printing would normally kick off a Venezuela-style hyperinflation crisis. In the case of the U.S., however, this crisis has been postponed because people, institutions and nations keep buying U.S. debt in the form of treasury bonds. But this situation cannot go on forever. In fact, famed hedge-fund manager Michael Burry, who made a fortune when he correctly predicted the 2008 real estate market crash, is warning that too much government debt and out-of-control quantitative easing are leading to a hyperinflation crisis.

If America does not start balancing its budget, it will learn the same lesson Venezuela is learning now, Zimbabwe learned in 2008, Yugoslavia learned in 1994, and Weimar Germany learned in in 1923: You cannot borrow or print your way out of a financial crisis. One of the wisest kings who ever lived, King Solomon, was inspired to write, “The rich ruleth over the poor, and the borrower is servant to the lender” (Proverbs 22:7). When the U.S. became the world’s leading creditor nation after World War i, the U.S. dollar became the world’s reserve currency. But now the U.S. has become the world’s leading debtor; it is only a matter of time before Venezuela-style inflation comes to America.

For more about the lessons every person in the world needs to glean from Venezuela’s hyperinflation crisis, please read “What the World Needs to Learn From Venezuela,” by Trumpet managing editor Joel Hilliker. Once America’s financial predominance disappears, its military predominance will also disappear—leaving the nation vulnerable to attack.