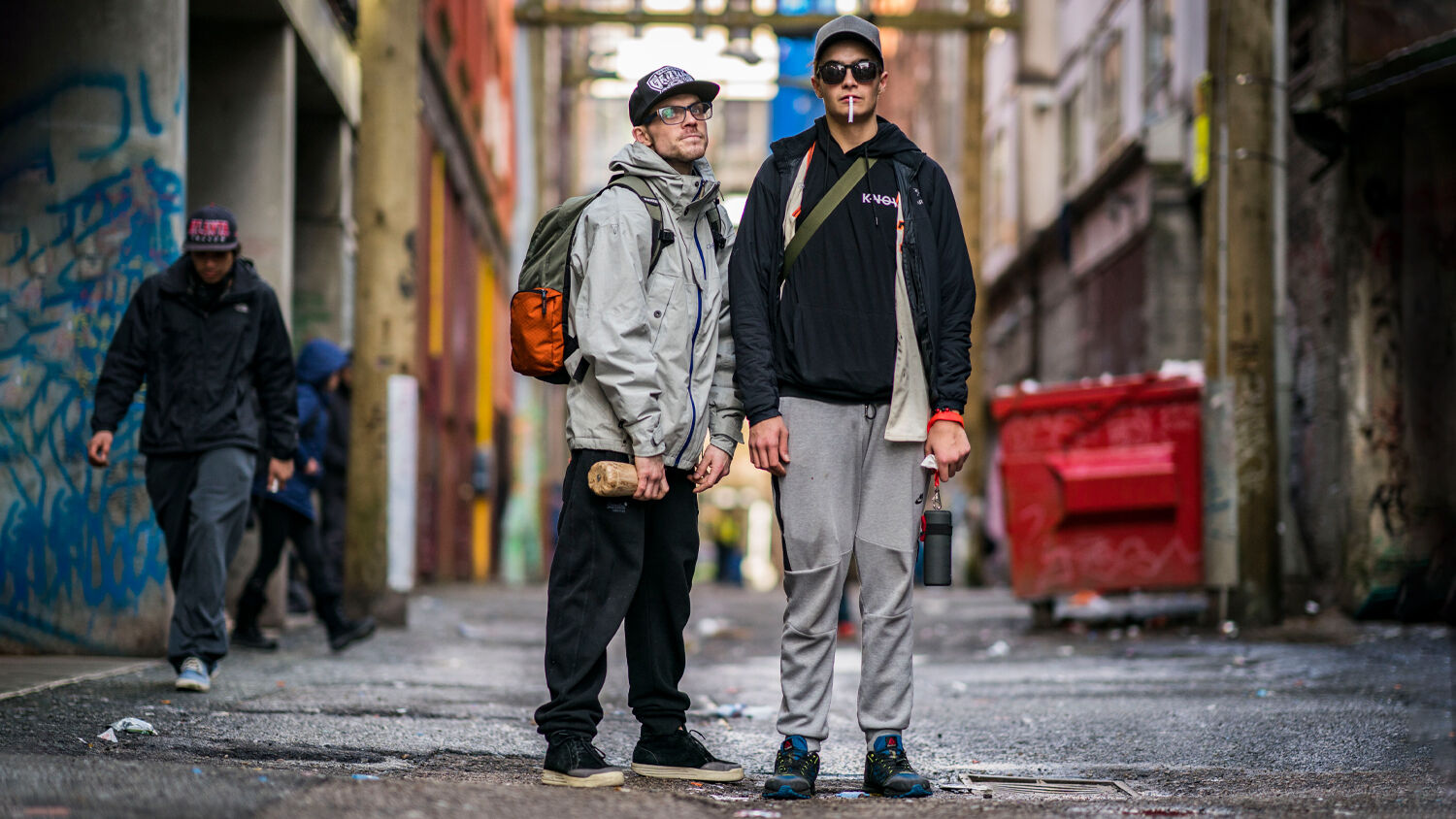 From left: Dylan, 27, and friend Vinney Taylor, 23, outside a pop-up injection site after getting high on street heroin in Vancouver’s Downtown Eastside.
John Lehmann/For The Washington Post/Getty Images

Will this solve the province’s skyrocketing drug problem?

British Columbia has asked the Canadian federal government for a drug law exemption, Globe and Mail reported February 11. The province is hoping to decriminalize possession of “small amounts” of drugs—not just specific drugs, but a blanket decriminalization of all drugs.

This follows action the Vancouver, B.C., municipal government took several months ago. The city council voted, unanimously, to seek an exemption from the federal government. Like the proposed provincial decriminalization, it wants to include all drugs, no matter how lethal. Vancouver’s vote came after Oregon enacted a similar decriminalization in November.

Some see decriminalization as a way to combat British Columbia’s overdose problem. The province declared its drug problem a “public health emergency” in 2016.

Karen Ward, a drug policy consultant from Vancouver, compares the crisis to “struggling to tread water in a tsunami.”

So what does the province propose to fix the problem?

Sheila Malcolmson, British Columbia’s minister of Mental Health and Addictions, wrote that decriminalizing “the possession of small amounts of controlled substances for personal use” was “a way to reduce stigma as a barrier to treatment.”

Malcolmson believes addicts would be more willing to get help if the law didn’t hang above them. Drug users, she writes, fear to come forward and get help because of the repercussions of breaking the law.

But that’s not going to fix the problem. Telling people that they can have their drugs and get away with it isn’t going to stop them. And what about those who refuse to dabble in drugs because of the law? What will happen when that restraint is gone? And who is to determine how big “small amounts” can be?

Canada has been going down this route ever since it legalized recreational marijuana in 2018. This push by British Columbia represents the latest slide down the slippery slope of drug legalization. Where will it stop? Will Vancouver, Toronto and Montreal soon have Amsterdam-style “smart shops” (stores selling legal drugs like magic mushrooms)?

Unlike in America, all criminal law in Canada is controlled by the federal government. So the province first has to get permission from Ottawa before it can do anything. Prime Minister Justin Trudeau said in September that his government has no plans to decriminalize drugs. “In any crisis like this, there is not one silver bullet,” he told cbc Radio 1’s Stephen Quinn. “We’re prioritizing the things that are going to make the biggest difference immediately.”

So what is the federal government’s plan?

“Strengthening the safer supply so that people can be subscribed alternatives to what they’re getting in the streets,” Trudeau said. In other words, giving doctors the power to subscribe “safer” drugs to people legally as alternatives to illegal drugs.

This is more desirable than decriminalizing everything from cocaine to crystal meth. But it’s not that much better. It’s still waving the white flag. And what kind of “safer” drugs are currently offered in British Columbia? They include diacetylmorphine. That’s the prescription name for heroin.

If you wanted to, you can even get “pharmaceutical” hydromorphone in Vancouver via vending machine. That’s unrestricted access to “a drug about twice as powerful as heroin.”

Proponents say giving addicts a small supply gives them enough to avoid withdrawal but not enough to overdose. It stops them from killing themselves. It’s easy to empathize with those who are desperate to find some way of stopping drug overdose deaths. On a cbc interview, Vancouver drug addict Kieran Collins called his addiction a “monster.” “That’s what it makes you become,” he said. “You’re doing things you don’t really want to do, that you weren’t raised to do, that you know are wrong, but you got accustomed to having to feed it.”

But feeding people’s addiction isn’t going to free them from it.

Vancouver is one of North America’s most expensive cities to live in. It constantly ranks as one of the top cities in the world in terms of livability. But a lot of residents don’t get to experience that livability for themselves. They’re experiencing hard drugs instead. Walking through Vancouver’s downtown section and seeing how many on the sidewalk are constantly stumbling, slurring their speech or shouting profanity at the top of their lungs really drives that point home.

But feeding a drug addiction is a moral issue—it’s a crime against your own body. And it’s a crime against those around you. It hurts others when you put your mind in a mental state where you could attack somebody else. It hurts your family when you squander the household’s finances to feed your problem. Those who love you hurt seeing you fall into a captivity of your own making.

The Apostle Peter wrote: “They promise them freedom, but they themselves are slaves of corruption; for whatever overcomes a man, to that he is enslaved” (2 Peter 2:19; Revised Standard Version).

Many like to portray concepts like drug vending machines and “safe” injection sites as forward-thinking advancements. Yes, it is likely some have been spared dying by drug overdose because of some of these programs. But it’s not freedom if a person’s life purpose is to get a daily injection.

Is a man’s purpose in life merely to search for the next high? Is human life so meaningless that we can afford to pump our bodies full of mind-altering poisons for the rest of our lives without achieving anything of value? For so many, that is all they have to look forward to. But it shouldn’t be.

Renowned educator Herbert W. Armstrong wrote in his book Mystery of the Ages: “Did you ever ask yourself: ‘Who am I? What am I? Why am I?’ The world about you is a mystery. You yourself are a mystery. You have never seen your brain, the seat of your intellect and all that you are. Your life is engulfed in mysteries. On reflection, your very existence is a mystery.”

There is a lot more purpose to human life than most realize. It’s certainly a lot more than living for the next high. Drug-induced slavery stops a man from achieving that purpose.

“What is the real truth concerning human worth?” Mr. Armstrong asked. “What is the real value of a human life? It is grossly overestimated in its own reality, and astoundingly undervalued in its supreme potential. The truth indeed is staggering.”

If you want to know what real freedom is all about, request your free copy of Mystery of the Ages.