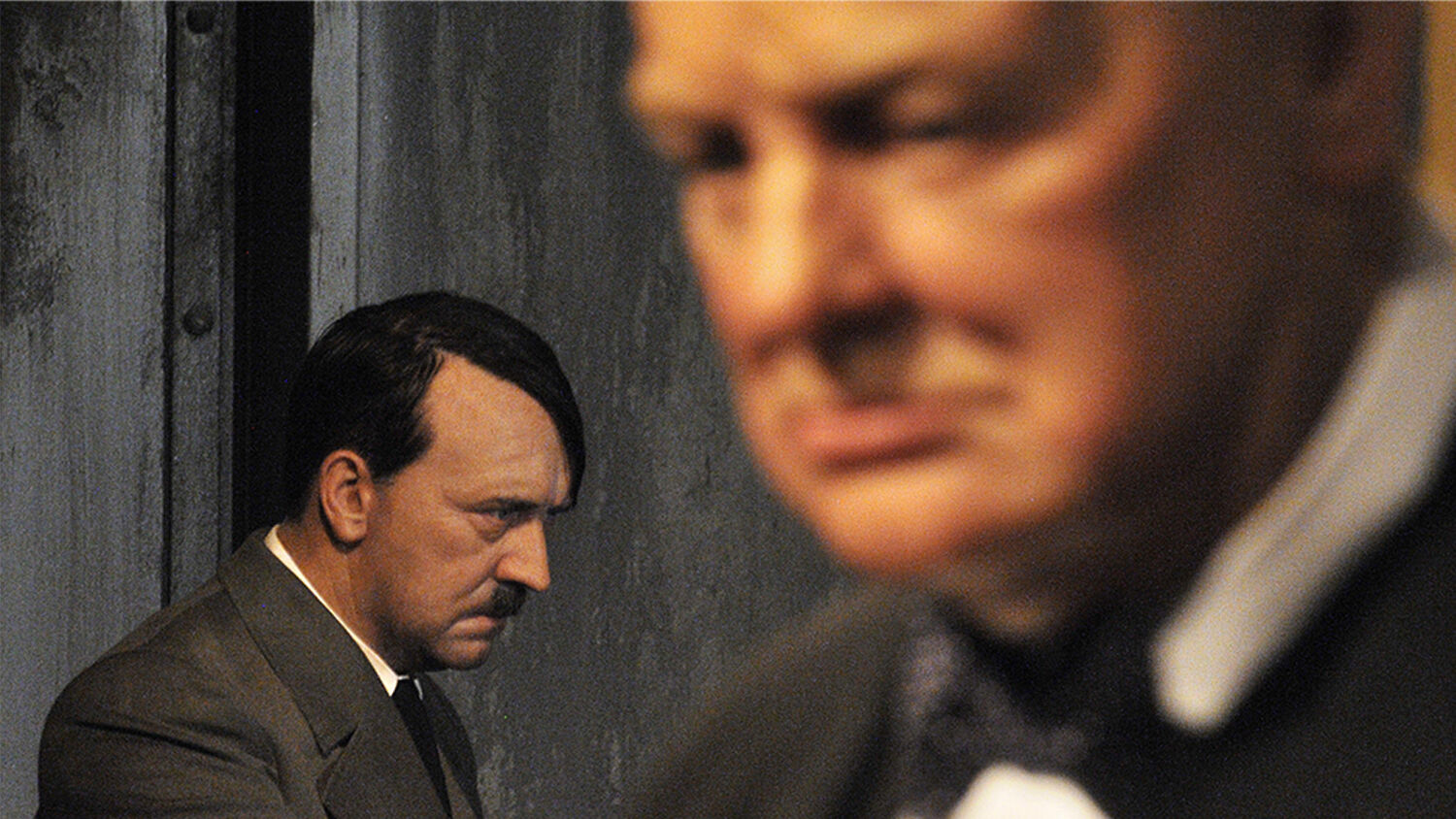 A wax likeness of former British prime minister Winston Churchill ® stands close to a likeness of Nazi dictator Adolf Hitler at Berlin’s Madame Tussaud’s wax museum, during a press preview of the museum on July 3, 2008.
JOHN MACDOUGALL/AFP via Getty Images

With this kind of education, no wonder we’re in trouble.

“The British Empire was far worse than the Nazis”—that was the verdict of Kehinde Andrews, professor of Black Studies at Birmingham City University.

He was speaking at an event hosted by Churchill College, Cambridge—the national and commonwealth memory to Winston Churchill. The college website claims to be “the embodiment of his vision of how higher education can benefit society in the modern age.”

Titled “The Racial Consequences of Mr. Churchill,” the college set out to examine Churchill’s “backwards” views on empire and race.

“There is no debate,” Professor Andrews told viewers. “His white supremacy is pretty much on record and the question here is why does Churchill still hold the level of popularity that he does?” Churchill, he said, was “the perfect embodiment of white supremacy.” And in case anyone believed winning the Second World War was a redeeming feature, Andrews said, “I’m pretty sure that if Churchill wasn’t in the war it would have ended the same way.”

Welcome to academic discussion at one of Britain’s most elite universities.

And America isn’t immune to this kind of revisionism.

One of Joe Biden’s first actions as president was to revoke the “1776 Report,” an inspiring account of America’s history and the type of thing that used to be standard at many schools.

This radical attack on history is easy to debunk; it’s something we’ve done on many occasions. That’s not what I want to do today. Instead, I want to show how this kind of nonsense is not only maddening; it has done very real harm.

And Cambridge University is not the only one set against Churchill. Last week brought in a story from an average school in East Sussex. Pupils at Seaford Head School demanded that one of their four houses no longer be named after Churchill. “Churchill was a figure who promoted racism and inequality, unfairly imprisoning and torturing many,” they wrote.

Rather than take this opportunity to correct their failure and teach the basic facts of British history, the school went along with the students’ wishes and promised to rename the house.

This is a glimpse into education all over the country. As Frank Furedi, emeritus professor of sociology at Kent University, pointed out: “It is almost like you’ve got to come for Churchill because if you can destroy his reputation then the whole of Britain’s past can be undermined.”

Contrast that to British education during the Empire’s rise to greatness. At that time, entire generations were raised with a burning passion to win glory for their country and themselves. The good qualities of previous figures were upheld as inspiration for future generations.

Horatio Nelson, for example, had the “ideals of patriotism, honor and martial heroism in the Classics drummed into him at school,” writes John Sugden in Nelson: A Dream of Glory, 1758–1797. He’d admired and imitated role models steeped in similar ideals. He also took much from “the patriotic plays of Shakespeare, with their frequent allusions to national triumphs over Gallic rivals”—whose most stirring passages he would quote often.

This pride and passion stirred him to take risks, expose himself to danger, and push through difficulty. “Nelson only practiced to a remarkable degree what the cult of heroic individualism fostered very broadly among the class he aspired to,” writes Linda Colley in her book Britons: Forging the Nation 1707–1837.

In modern history, there are no role models and no glory. There’s nothing to learn from or imitate. Nothing to strive for. Only people to criticize and look down on. As historian Nicholas A. M. Rodger said, “No modern university historian could possibly write the life of a famous hero and hope to preserve his reputation, unless he destroyed that of his subject.”

And the society we live in is the result. Nelson was willing to brave almost any danger in pursuit of the glory he craved. Now we crave nothing and hunker in fear in the face of a virus that at least 99.9 percent of healthy people survive. Our politicians lack the courage to make any kind of decision—and instead delegate to the “experts” who see catastrophe around every corner. Even after their forecasts of doom are proved wrong time and again, we still cower after their warnings—just in case this time they’re right.

We see it in the disastrous foreign-policy decisions our nations are making.

Prior to World War ii, Britain’s elites wanted to cozy up to Adolf Hitler. Had the nation listened to Churchill, Hitler could have been stopped with little difficulty, and millions of lives could have been saved. But Britain’s government has long been dominated by alumni of Oxford and Cambridge. And Britain’s foreign-policy establishment almost universally chose appeasement.

In 1933, the Oxford Union infamously voted that “this house refuses in any circumstances to fight for king and country.” Britain’s elite universities were hostile to Churchill throughout the 1930s. Once France fell in 1940, the same foreign-policy establishment wanted to make peace with Hitler, handing him victory in war.

The education provided by these institutions played a role in the death of millions. You’d have thought these universities would humbly study Churchill’s legacy to see where they went wrong. Instead, the college named after him makes him out to be worse than Adolf Hitler.

The spirit of Nelson and Churchill are well and truly dead in our society. That spirit was kindled by their education, and our educational institutions are responsible for its destruction.

The Prophet Isaiah eloquently described the situation we find ourselves in: “For, behold, the Lord, the Lord of hosts, doth take away … The mighty man, and the man of war, the judge, and the prophet, and the prudent, and the ancient, The captain of fifty, and the honourable man, and the counsellor, and the cunning artificer, and the eloquent orator. And I will give children to be their princes, and babes shall rule over them” (Isaiah 3:1-4).

How much of our education, and the institutions themselves, is responsible for this curse?

“Today we hear many academic voices telling people that learning history is of little or no value,” wrote Trumpet editor in chief Gerald Flurry. “This is an extremely dangerous trend that may be too entrenched ever to correct. This educational plague is rampant among the American and British peoples. It seems that few of our leaders understand what a colossal disaster it is!”

When God wanted to turn a nation around, He inspired them with a positive view of their history. The Prophet Ezra produced the book of Chronicles. This kind of positive history can help turn nations around. But its absence destroys them.

“One of Winston Churchill’s greatest biographers, William Manchester, said that Churchill ‘saved Western civilization’—not just Britain and Europe,” wrote Mr. Flurry. “More accurately, Mr. Churchill was used by God to save Western civilization. How important is it that we learn from that civilization-saving history? Our most esteemed universities, however, neglect history and ignore its invaluable lessons.”

Now, Churchill College is going even further. It’s not just neglecting that history; it’s actively trying to destroy his example.

It’s easy to be angered by examples like that of Churchill College. But it can be harder to glimpse the real damage they’re doing.

Studying history has practical value. And its distortion has tangible effects on nations. We’re living with those effects today.

The Trumpet has had a lot to say about history over the last 30 years. We’re a newsmagazine, not primarily focused on history, but you need history to understand world news. And you need to understand the decline in history’s education to understand many of the problems facing our nations today.

It’s a subject Mr. Flurry addresses in the appendix to his book The Former Prophets. Titled “A Law of History,” it shows what our universities, politicians and the public should be getting from a study of history. There’s so much an honest study of history will teach.