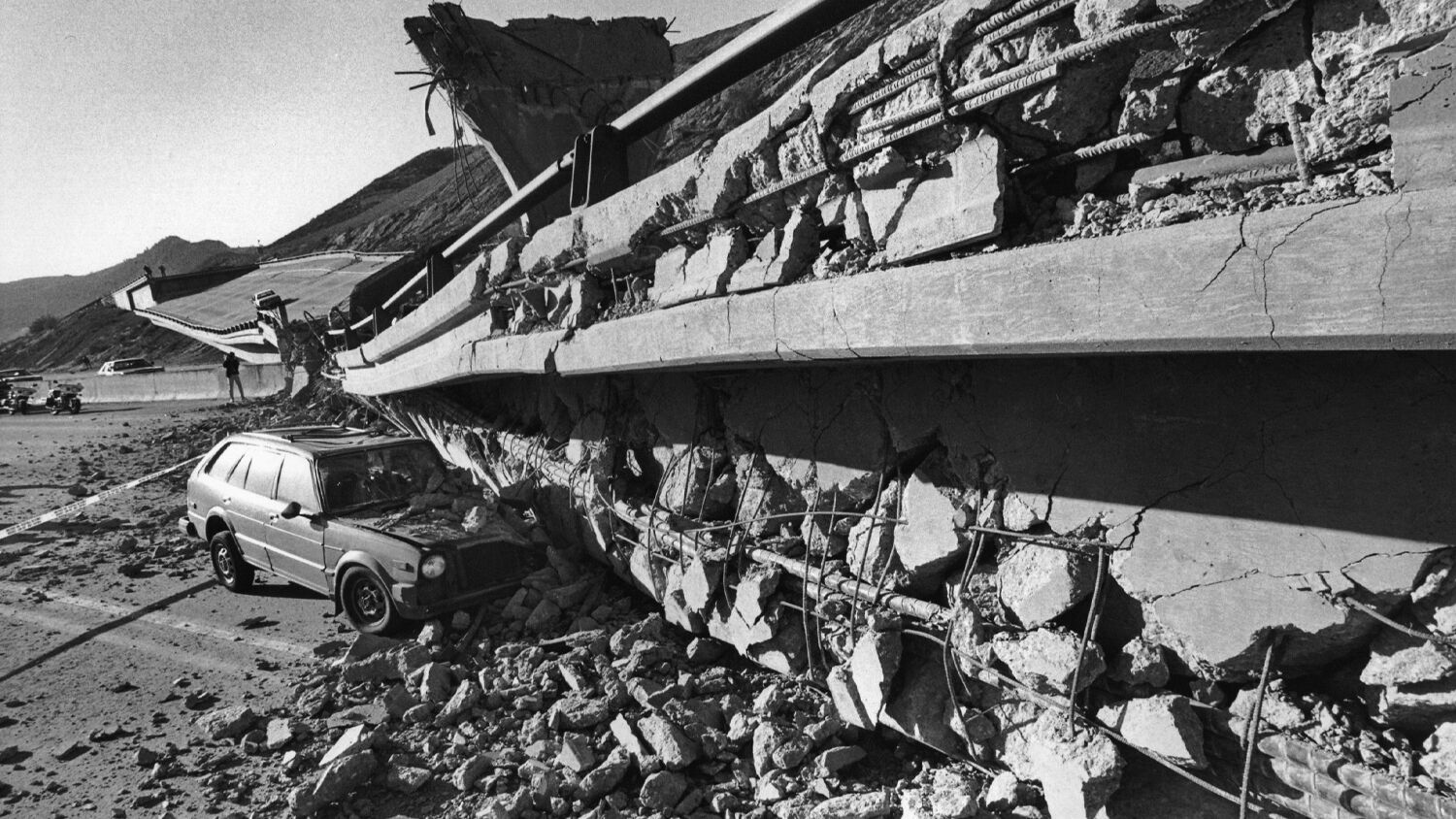 A Honda station wagon crashed in a fallen 14 freeway from the Northridge earthquake.
Ted Soqui/Corbis/Getty Images

If you’ve seen anything from the Trumpet website over the past few months, you’ll know that editor in chief Gerald Flurry has written a lot about prophecies from the book of Amos as pertaining to the presidency of Donald Trump.

For this article, I want to relate some statements Mr. Flurry made about Amos—not three months ago, but three decades ago. What took place in the lead-up to a certain fateful day in 1994 is vividly applicable to today.

On Dec. 21, 1991, based on end-time prophecies in the book of Amos, Mr. Flurry made the following statement to our members (emphasis added throughout):

I wouldn’t even be surprised if within the next two years you … see a massive earthquake in this world, perhaps even in Pasadena, California.

In an October 1993 message, he went further, stating:

Is it possible that God could strike with an earthquake … maybe even on January the 16th, 1994? Is it possible something like that could happen? Well yes, I would say it’s possible, especially in the state of California.

He doubled down on his warning in a December 1993 article for the Trumpet magazine:

God also says He will punish Israel with the earthquake. Will an earthquake be the next California disaster?

A massive earthquake, on or around Jan. 16, 1994, in or around Pasadena, California—warned about up to two years in advance. Ludicrous.

On Jan. 17, 1994, at 4:31 a.m., a massive 6.7-magnitude earthquake rocked Los Angeles County, California—the same county in which Pasadena is located, with the epicenter only 20 miles away. Known as the Northridge earthquake, the event remains, to this day, the costliest earthquake disaster in United States history and the ninth-costliest natural disaster.

The scenes were apocalyptic. Dramatic pictures show crumbled freeways, collapsed apartment blocks, and vaporized mobile homes. Damage estimates were between $13 billion and $50 billion ($23 to $87 billion in today’s value). More than 70 people were killed, 9,000 injured, and 20,000 displaced. Alongside the sheer cost, other records were broken by this monster quake—including the fastest ground acceleration ever recorded in a U.S. urban area and the fastest peak ground velocity. The quake has lived into infamy, with references in music and film; it also led to the formation of the California Earthquake Authority.

Coincidence? You try to predict a natural disaster up to two years in advance in the exact district and to the nearest hours and see if it happens, let alone becomes the greatest disaster of its type. (You can read more about these prophecies, and why Mr Flurry made them, here.)

So when Mr. Flurry talks about end-time prophecy from the book of Amos—as he has recently in relation to the election—I would take note. As Amos 3:7 says, “Surely the Lord God will do nothing, but he revealeth his secret unto his servants the prophets.”

The Northridge earthquake is only one of many vivid and similar examples over the decades, big and “small.” Following in the footsteps of his predecessor, Herbert W. Armstrong, Mr. Flurry has directed the Trumpet for over 30 years in making some truly vivid and bold statements based on Bible prophecy. Some events we are still watching for and waiting to come to pass. But dozens of directly prophesied events have dramatically come to pass. (You can read more along these lines in our free booklet He Was Right.)

In 2014, another similar train of events is burned into my memory.

On the afternoon of September 25 that year (the Feast of Trumpets), Mr. Flurry gave the afternoon message at our headquarters campus in Edmond, Oklahoma. All year long, the newswires had been plastered with coverage about the hideous beheadings perpetrated by the Islamic State in the Middle East. Speaking about this, Mr. Flurry warned that day that the United States had better wake up, because these beheadings, these acts of violence, are coming to us.

The statement did not hit me at the time. But it walloped me when I got home that evening and checked the news. My jaw dropped to read that a horrific beheading had just taken place by a radical Islamist in Oklahoma City, only half an hour away. In what became known as the Vaughan Foods beheading incident, a Muslim man entered the processing plant shouting, “Allahu akbar,” and proceeded to attack two workers, wounding one and decapitating the other.

The incident took place at 4 p.m. that day. That was in the midst of Mr. Flurry’s message.

Again, one of many examples in which I’ve learned that when Mr. Flurry speaks, it’s worth taking note.

The work of a prophet is not a pleasant job. The Bible repeatedly describes it as a terrible burden. But as Amos also describes: “The lion hath roared, who will not fear? the Lord God hath spoken, who can but prophesy?” (verse 8).

In 2019, based on Bible prophecy in the book of Amos, Mr. Flurry predicted that President Trump would win the election. Was he wrong? The multitude of evidence (which has not yet been heard in court) firmly bears out that he did win—but that the election was stolen from him.

Mr. Flurry continues to declare that Donald Trump will be back—that according to the book of Amos, his work is unfinished. Even as Joe Biden sits in the White House and gradually picks apart President Trump’s (and the nation’s) legacy piece by piece, we wait patiently for Trump’s inevitable return to finish what Amos prophesies of him.

Sometimes not all the details are immediately obvious. As we have written about recently with regard to this past U.S. election, the exact timing is not always clear. But that doesn’t do away with God’s prophecies. The New Testament apostles firmly believed Jesus Christ’s return was just around the corner. Their timing was “off,” you could say, by nearly 2,000 years! Yet the Scripture they were inspired to write holds firm to this day—and it turns out to be directly for today.

As Christ Himself said of His prophesied coming: “Therefore be ye also ready: for in such an hour as ye think not the Son of man cometh” (Matthew 24:44). Other passages describe the “day of the Lord,” the time of man’s greatest calamity, coming “as a thief in the night” (1 Thessalonians 5:2-4; 2 Peter 3:10).

Jan. 16, 1994, after all, came and went without incident, as any other day. Everything seemed normal. Perhaps those who may have heard or read about Mr. Flurry’s statements about an earthquake may have breathed a sigh of relief as they went to sleep. But Christ warns in Revelation 3:3:

Remember therefore how thou hast received and heard, and hold fast, and repent. If therefore thou shalt not watch, I will come on thee as a thief ….