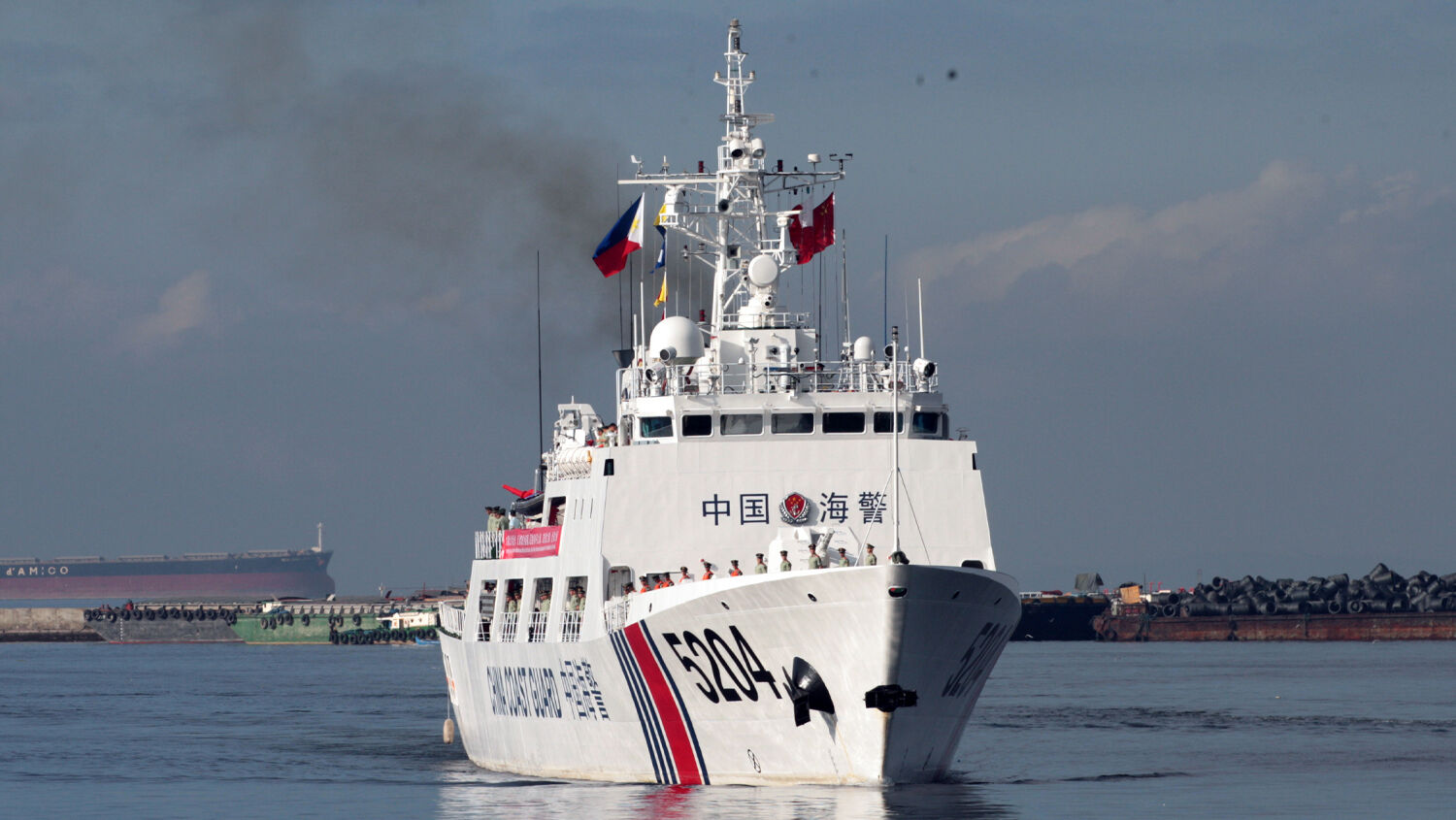 A Chinese Coast Guard ship prepares to anchor at Manila port on January 14, 2020, for a port call.
STR/AFP via Getty Images

Giving the Coast Guard a military mandate is ‘a sign that a plausible war can occur’ in the South China Sea.

China passed a “game changer” law on January 22 that authorizes its coast guard to open fire on foreign vessels in waters the Chinese illegally claim, in the latest sign that Beijing is edging the world toward conflict.

The bill’s draft wording says the Chinese Coast Guard may “take all necessary measures, including the use of weapons, when national sovereignty, sovereign rights, and jurisdiction are being illegally infringed upon by foreign organizations or individuals at sea.”

The legislation specifies that handheld, shipborne and airborne weapons can be used. It also allows the Coast Guard to demolish structures built by other nations on features in disputed waters, and to board and inspect foreign vessels.

The law will have the most bearing in the South China Sea, large parts of which, international law says fall in the exclusive economic zones of Brunei, Malaysia, the Philippines, Taiwan and Vietnam. But China has no regard for international law and claims nearly the entire vast sea as its own.

China claims entire South China Sea and is building islands to enforce it. 5 other countries have overlapping claims pic.twitter.com/8cIDRrxGJc

It is notable that the law concerns not China’s navy but its coast guard, which is the largest in the world. In the past, China’s coast guard was already overstepping the bounds of a typical coast guard force by harassing other nations’ vessels in disputed waters. But since the new law gives the Coast Guard a military mandate, we can expect it to behave far more aggressively in such confrontations going forward. Defense analyst Chester Cabalza discussed that aspect of the legislation with the South China Morning Post last week: The law transforms a “white” force intended for search and rescue and policing into a dangerous “gray” arm of the military, he said. Cabalza said that in this way, the new law is a “game changer.”

Cabalza continued, saying that giving the Coast Guard a full military mandate is “a sign that a plausible war can occur” in the South China Sea. “If China uses force to defend its territory from enemies, possessing the world’s largest coast guard [will be] a time bomb that can explode any time.”

Trumpet editor in chief Gerald Flurry has said that China’s increasing aggression in the South China Sea is indeed “steering the world toward war.” In our July 2016 issue, he wrote:

Since [the end of] World War ii, America protected this vital trade route and brought peace to this part of the world. Now the American military is retreating, and other great powers are coming in to fill the vacuum. … China is intimidating the nations of Southeast Asia into submission to its will. It is forcing these countries to do what it wants. Everything is headed in the direction of war.

Mr. Flurry’s analysis of the South China Sea situation is based on specific Bible prophecies about the modern age. Ezekiel 4 describes a time just before a third world war breaks out. Verse 3 reads, “[S]et thy face against it, and it shall be besieged, and thou shalt lay siege against it. This shall be a sign to the house of Israel.”

Regarding this scripture, Mr. Flurry wrote: “The ‘house of Israel’ primarily refers not to Jews, but to the modern descendants of Israel, specifically the United States and Britain. Here is pictured a siege against the house of Israel.”

Isaiah 23 provides more details about this economic siege. It shows that a brief economic alliance will form between a German-led European bloc and certain major Asian powers. In verse 3, Isaiah calls this Eurasian alliance a “mart of nations.” Mr. Flurry explained that it will come together mainly to economically besiege modern-day America and Britain:

The Bible contains many prophecies of that European power attacking America. This is where China and the other giants of Asia enter the picture. Considering that China now possesses most of the world’s strategic sea gates (at one time held by Britain and America), the German-led Holy Roman Empire will need to form a brief alliance with the Asian powers identified in Isaiah 23 ….

China’s behavior in the South China Sea, including its “game-changing” decision to turn its coast guard into an arm of its military, is leading to the fulfillment of this prophecy. China is intimidating the less powerful nations in the region with the goal of eventually cutting off America’s and other nations’ access to the South China Sea. “Soon America will find it impossible to import oil and other necessities,” Mr. Flurry wrote.