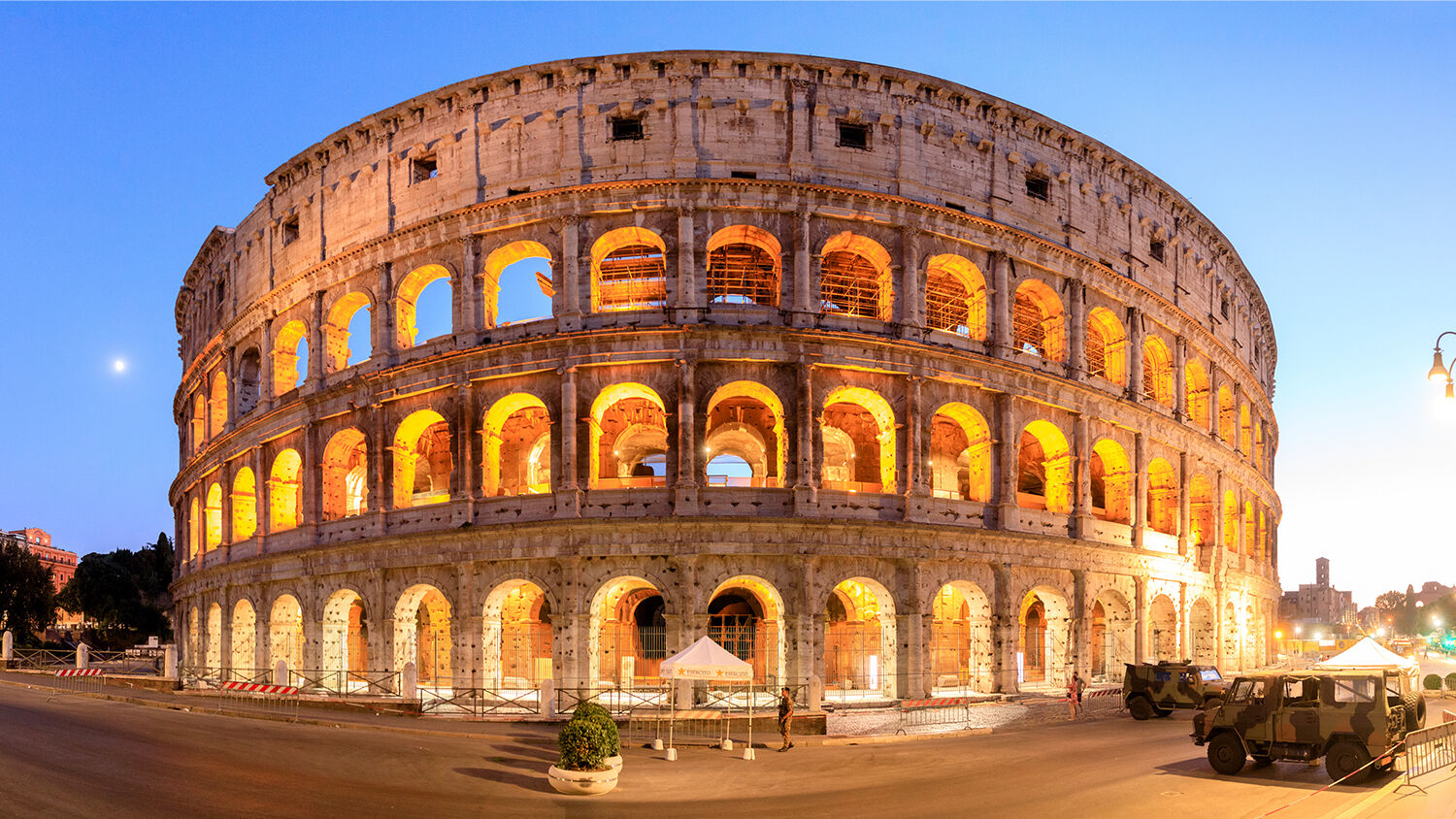 27 August 2020, Italy, Rom: 28.08.2020, Rome, Italy: (EDITORS NOTE: Image is a panoramic composite) The Colosseum, originally the Flavian Amphitheater, is a huge ovoid amphitheater located in the center of the city of Imperial Rome, the largest ever built in the Roman Empire. It is one of the greatest works of Roman architecture and engineering on August 28, 2020 in Rome, Italy. Its construction began between 70 and 72 AD. AD, under Emperor Vespasian, and ended in 80 under Titus. Other changes were then made during the reign of Domitian (81-96). The name Flavian amphitheater derives from the surname of Emperor Vespasian and his sons Titus and Domitian.
Thierry Monasse/picture alliance via Getty Images

The Roman Empire is being resurrected before our eyes.

January 27 was the 1,923rd anniversary of Marcus Ulpius Traianus inheriting emperorship of Rome in a.d. 98. You may know him better as Emperor Trajan, a strong candidate for the greatest emperor Rome ever knew. Under Trajan, the Roman Empire reached its maximum size. Trajan’s empire stretched from southern Scotland to the Persian Gulf, from the Atlantic coast of Africa to the Caspian Sea. Historian Edward Gibbon called Trajan’s historical epoch the time “during which the condition of the human race was most happy and prosperous.”

That was almost 2,000 years ago. The Roman Empire is ancient history today. All that is left of the glory of the Caesars are their crumbling monuments, now tourist attractions.

But it doesn’t mean that powerful nations throughout history haven’t tried to resurrect those ruins.

The latest to do so is Rome’s direct successor: the nation of Italy. According to a Foreign Policy report, Italy has been quietly building an economic empire throughout the Mediterranean region. In fact, Italy is becoming Europe’s most innocuous imperial power. Foreign Policy noted that “the map of Italy’s rising 21st-century commercial prowess looks a lot like the first-century map of the Roman Empire.”

Termed il Mediterraneo allargato (the enlarged Mediterranean), Italy’s 21st-century economic vision has led it to invest heavily in North Africa and the Balkans.

Italy is one of the primary investors in the Balkans. It invested $11.4 billion in the Western Balkans in 2018. It is the second-largest trade partner of both Croatia and Romania, and the third-largest of Bulgaria.

Many prominent banks in the region, like Banca Intesa Beograd of Serbia and Privredna Banka Zagreb of Croatia, are now Italian subsidiaries. The assets of Zastava, the Serbian maker of the notorious Yugo cars, are now controlled by Fiat.

Italy also has heavy energy investments in North Africa. Energy company Eni, whose largest shareholder is the Italian government, controls almost half of Libya’s oil and gas production. It also has a heavy presence in Algeria, the largest producer of natural gas in Africa. Eni is a joint owner of the 1 Trans-Mediterranean pipeline that transports Algerian natural gas to Italy. Eni also owns half of the Zohr natural gas field in Egypt, as well as half of one of Egypt’s only two liquefied natural gas plants.

One of Italy’s major projects under way is the Turkey-Italy-Tunisia corridor. This project is a maritime network of ports centered on Italy’s deepwater port of Taranto. The agreement hopes to make Taranto a trade hub between Europe and the Middle East-North Africa. Foreign Policy wrote, “With Italy facing the prospect of being the gatekeeper of European trade to Africa, perhaps all roads may again lead to Rome.”

Italy also invests significantly in Cyprus’s offshore natural gas exploration. This has brought the European Union to loggerheads with Turkey, another nation interested in the region’s resources.

Italy’s investment in the “enlarged Mediterranean” is so significant that Foreign Policy has compared it to China’s monumental Belt and Road Initiative.

But this isn’t just an economic empire. Italy has a heavy military presence in the region as well. Its military is involved everywhere from Libya to Iraq to Lebanon to Bosnia and Herzegovina.

Many analysts focus on the growing influence of countries like Germany and France. Italy generally slips under their radar.

This isn’t the first time in modern times Italy has tried to resurrect the Roman Empire. After Italian Unification in 1870, Rome fought for a place among the colonial powers. It conquered Libya from the Turks and established a colony in Somalia. After World War i, it annexed a few Greek islands from the Ottoman Empire. During the Fascist era, Mussolini conquered Ethiopia and Albania and annexed part of Yugoslavia.

In other words, Italy has tried before to establish a sphere of influence in Africa and the Balkans, mirroring the Roman Empire’s old footprint in the Mediterranean. This is precisely what Italy is trying to do now. Only, instead of armies, its primary tools today are economical.

But one has to wonder where this is all leading.

Bible prophecy states that Italy’s involvement in the Mediterranean won’t be limited to economics. In the very near future, you can expect the heirs of Trajan and Mussolini to revert to their old ways of conquest and invasion.

Daniel 7 is a prophecy about four “beasts.” In biblical symbolism, a “beast” is a symbol of an empire (verses 17, 23). These four beasts are associated with the “great sea” (verse 2), or the Mediterranean. This is speaking of four world-ruling empires to come out of the Mediterranean region. The Prophet Daniel lived during the time of the first empire: ancient Babylon (also see Daniel 2:31-40). Three other super-empires followed Babylon: first Persia, and then Alexander’s Greek Empire.

And most people know well which great empire followed the Greeks: the Roman Empire.

Rome is represented by the fourth beast. This beast was “exceedingly dreadful,” and his “teeth were of iron, and his nails of brass.” The beast “devoured, brake in pieces, and stamped the residue with his feet.” He had “ten horns” on his head (Daniel 7:19-20).

This “beast” sounds like quite a frightening creature. But Rome fell long ago. How is this relevant to today?

A related prophecy in the book of Revelation brings it to the present. Revelation was written during the time of the Roman Empire. It is a book about “things which shall be hereafter” (Revelation 1:19), meaning events after when it was written. Chapter 13 refers to a “beast” with “ten horns” that rose “up out of the [Mediterranean] sea” (verse 1). Its unmatched warrior prowess causes people to worship it (verse 4). The beast becomes so mighty that “power was given him over all kindreds, and tongues, and nations.”

Revelation 17:8 mentions that this beast would dwell in a “bottomless pit,” or underground. This beast, after lying dormant, would emerge from the underground. “[A]nd they that dwell on the earth shall wonder … when they behold the beast that was, and is not, and yet is.”

Italy’s Mediterranean exploits are laying the foundation for this beast to “rise up out of the sea” once more.

To learn more, request our free booklet Who or What Is the Prophetic Beast? by Herbert W. Armstrong.