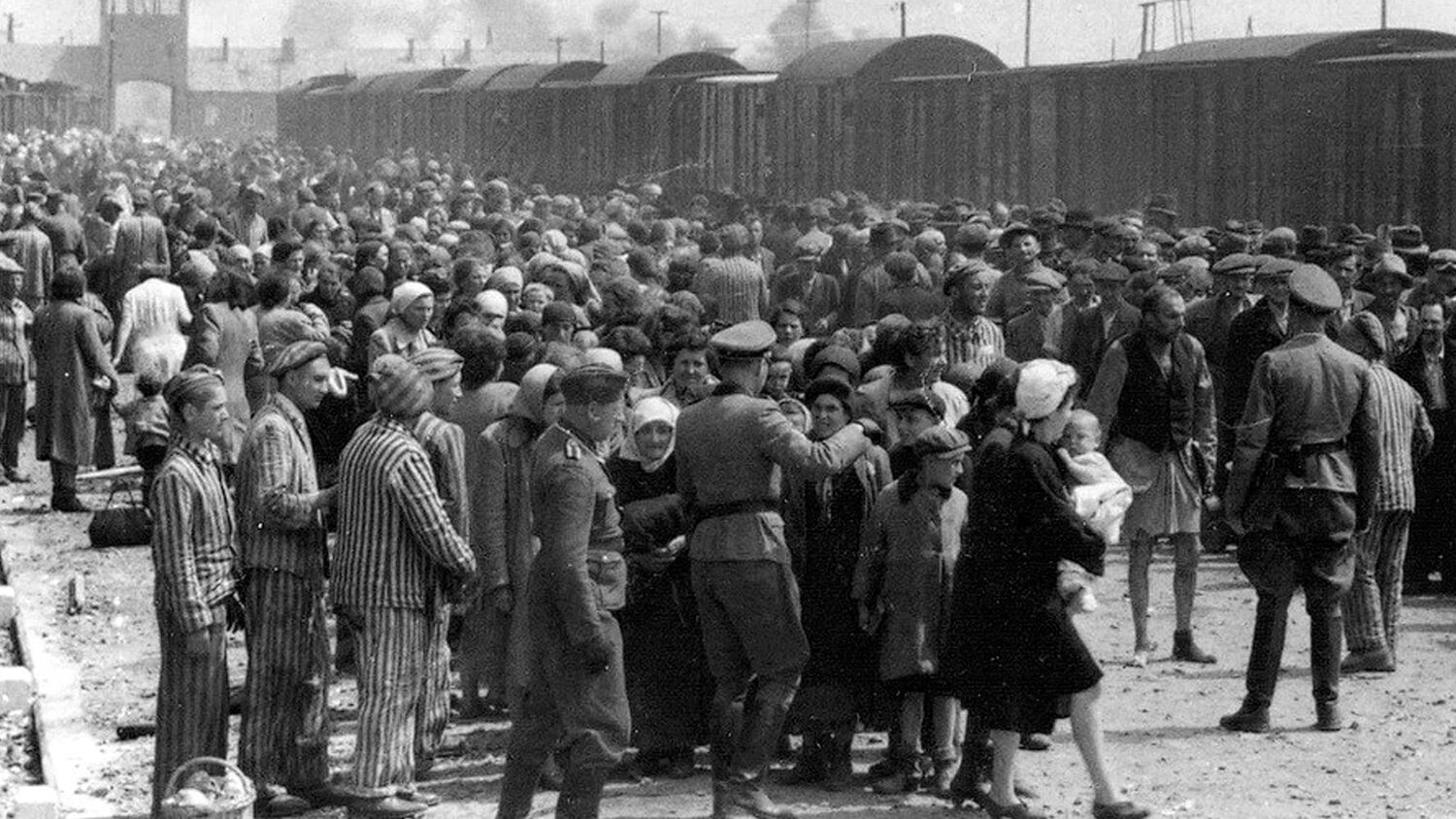 “Selection” of Hungarian Jews on the ramp at Auschwitz ii-Birkenau in German-occupied Poland, May-June 1944, during the final phase of the Holocaust.
Public Domain

More than a memory, anti-Semitism is a sad reality and a warning of an even greater holocaust to come.

Seventy-six years ago, on January 27, inmates of the Auschwitz concentration camp were liberated. The day was designated by the United Nations in 2005 as an International Holocaust Remembrance Day. Every year on this day, politicians pledge to remember the victims of the Holocaust. But anti-Semitism in Germany is not only history, it is a sad present-day reality.

To commemorate the memorial day, the French Embassy in Berlin displayed thousands of names of Holocaust victims on its facade. The project was supported by Germany’s culture commission and designed to bring the remembrance culture into the digital age.

A new memorial project in Germany hopes to bring #HolocaustMemorialDay into the digital age. pic.twitter.com/uB7vnQyX4i

But Holocaust Remembrance Day is also a reminder that anti-Semitism isn’t just history. “Responsibility is always called for on memorial days,” Bundestag President Wolfgang Schäuble said at a memorial hour for the victims of National Socialism, “but are we living up to it? In our country, anti-Semitism and xenophobia are once again showing themselves openly, unrestrainedly, even ready to use violence” (Trumpet translation throughout).

“Jews hide their kippah, conceal their identity,” Schäuble added. “In Halle, the Jewish community escaped a murderous attack only by chance.” Despite the fact that every synagogue in Germany is under police protection, Jews still live in fear.

“It is devastating to have to admit our culture of remembrance does not protect against a brazen reinterpretation or even denial of history,” Schäuble continued. “Nor does it protect against new forms of racism and anti-Semitism, such as those spreading in schoolyards, on Internet forums or in conspiracy theories.”

Many in Germany today focus on the Alternative für Deutschland (AfD) as a prime example of modern anti-Semitism and open trivialization of the Holocaust. Influential AfD leader Björn Höcke caused a stir in January 2017 when he told a cheering crowd that Germany should be proud of its history and make a “180-degree reversal on the politics of remembrance.”

President of the Jewish Community of Munich and Upper Bavaria, Charlotte Knobloch, delivered a speech at the German parliament recounting her family’s suffering during the Nazi era. She reminded the parliamentarians that anti-Semitic ideas and conspiracy myths are receiving more popularity in schools and in demonstrations against the government’s covid-19 measures. She also said that in her circle of acquaintances, quite a few Jews are now thinking of emigrating.

But has Nazism truly been defeated? Focusing solely on the AfD or a few extremists is a dangerous trap. A recent study found that every fourth German holds anti-Semitic views.

Even many of Germany’s established institutions that claim to fight anti-Semitism, are not free from it themselves. Every year, the Simon Wiesenthal Center in Los Angeles documents anti-Semitic incidents inside and outside the United States and compiles a top 10 list. Die Welt noted Dec. 29, 2020, that “renowned German cultural institutions are on the unflattering list.”

In 2020, Germany’s united cultural institutions appealed to the public in a “Plea of ​​the Initiative GG 5.3 Cosmopolitanism” to reverse the ban on the Boycott, Divestment, Sanctions (bds) movement. The movement was banned by the Bundestag in 2019. bds calls for a political, economic and cultural boycott of Israel until the Jewish state gives up the occupation of Palestinian territories (meaning the West Bank and East Jerusalem). Others in the movement claim that a Jewish state shouldn’t exist at all.

There is no doubt that the movement is anti-Semitic. By siding with the bds, Germany’s cultural elite are, by extension, supporting a boycott on Israel. This shows that hatred toward Israel is not just a problem of a few individuals or the less educated but well established in German society.

Die Welt noted: “August Bebel is said to have said that anti-Semitism is ‘the socialism of stupid guys.’ It could also have been the Viennese politician Ferdinand Kronawetter, a contemporary of Bebel, who said this. No matter who it was, the sentence was right in its time, but today it should be updated a little: ‘Anti-Semitism is the populism of the educated classes.’”

This is a most interesting observation. Adolf Hitler developed his deep-rooted anti-Semitism in the cultural center of Vienna. In his book Mein Kampf, he wrote: “This was the time in which the greatest change I was ever to experience took place in me. From a feeble cosmopolite I had turned into a fanatical anti-Semite.”

“Hitler believed that God led him to force Austria into the Third Reich,” Trumpet editor in chief Gerald Flurry noted. “The world watched and did nothing. Many Jews were so fearful that they committed suicide before the German Army even arrived in Austria. And of course, hundreds more were slaughtered after the Army entered.”

Many have asked why and how such deep-rooted anti-Semitism has survived over centuries in Europe. Mr. Flurry explains the shocking answer in his booklet Germany and the Holy Roman Empire:

Hitler considered the Jew to be the devil personified. In truth, the Jews have been specially commissioned to preserve the oracles of God (Romans 3:1-3). The oracles include the sacred calendar, knowledge of the biblical week, including the seventh-day Sabbath, and the Old Testament Scriptures.

Jews suffered at Hitler’s hand more than any other race. Historically, the main victim of the Holy Roman Empire has been the spiritual Jews—or God’s Church (Revelation 6:9-11; 17:5-6).

So Hitler’s hatred of Jews goes much deeper than the world has ever even imagined. The main force of this emotion is Satan’s hatred for God!

This is the reason Jews have been so vehemently persecuted over the ages, and that understanding comes right out of the Bible. And various biblical prophecies show that another holocaust is yet ahead.

Daniel 11:40-41 read: “And at the time of the end shall the king of the south push at him: and the king of the north shall come against him like a whirlwind, with chariots, and with horsemen, and with many ships; and he shall enter into the countries, and shall overflow and pass over. He shall enter also into the glorious land, and many countries shall be overthrown: but these shall escape out of his hand, even Edom, and Moab, and the chief of the children of Ammon.”

This prophecy shows that the king of the north—Catholic Europe led by Germany—will get control over the Middle East, including Jerusalem and the surrounding territory. “The events in the Middle East are going to lead to seriously escalating problems,” Mr. Flurry wrote. “They are going to trigger World War iii. The Bible says so. The king of the north is almost in place for this global tragedy.”

This prophecy is explained in detail in our free booklet Germany and the Holy Roman Empire. Anti-Semitism isn’t just history; it is a tragic harbinger of a future holocaust. Request a free copy of Germany and the Holy Roman Empire to understand the true cause of anti-Semitism and to learn about the hope that Bible gives despite the imminent horror ahead.