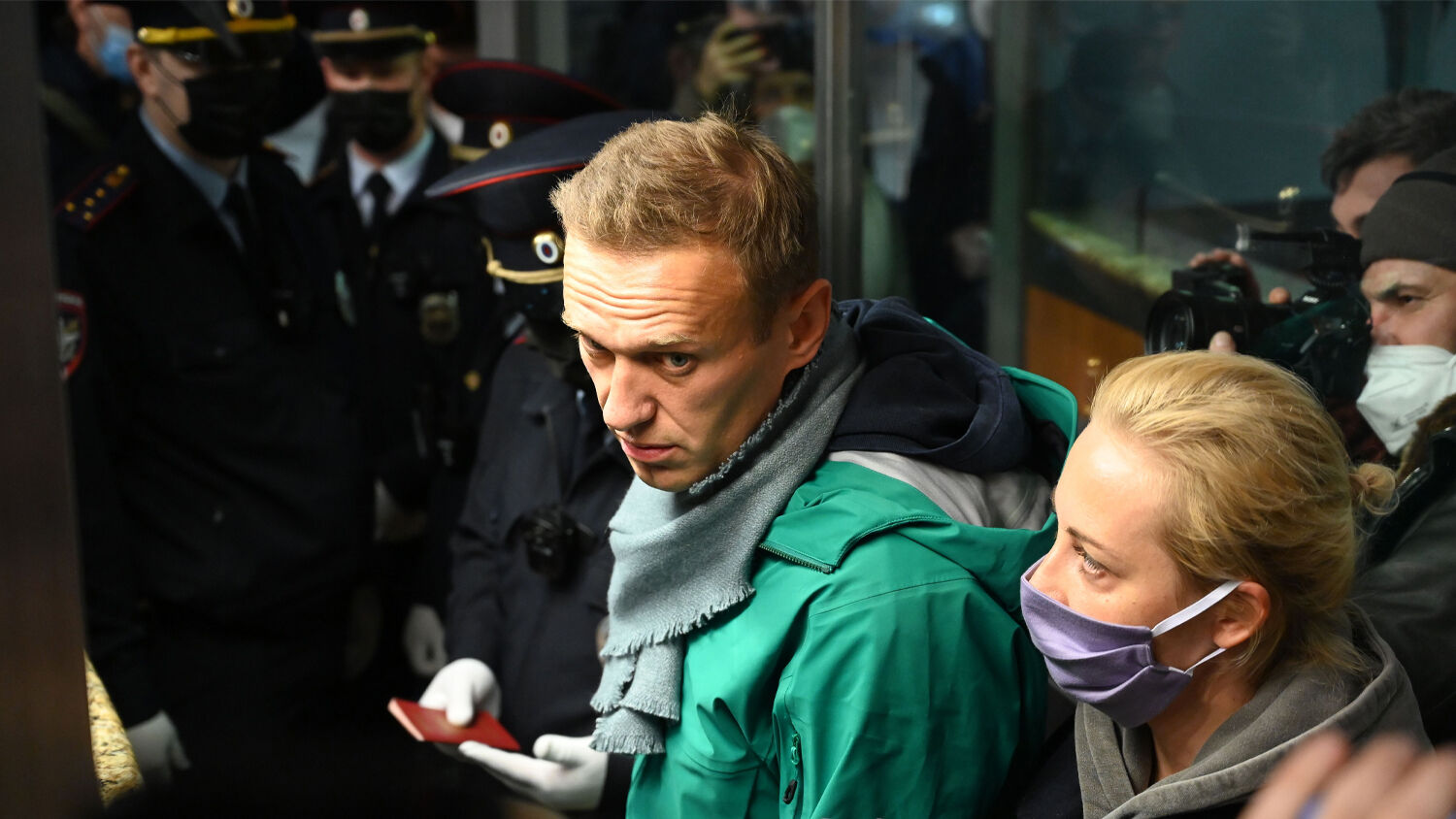 Germany’s cooperation with Russia is reckless and malicious.

Kremlin critic Alexei Navalny returned to Russia on January 17; he was promptly arrested at the airport upon arrival. Widespread protests have erupted in Russia as a result. Hundreds of thousands of Russians have come out in support of Russian President Vladimir Putin’s biggest critic. While many Western observers considered the protests a signal of hope for Russia, the Kremlin was quick to silence the crowd.

The German government condemned Russia’s crackdown on free speech and human rights. But many, even in Europe, considered this condemnation hypocritical, as the government continues to support the Nord Stream 2 project connecting Germany and Russia. The European Union may come up with some sort of sanction to show its solidarity with Russian citizens, but as in the past, the actions will likely prove meaningless.

But as history repeatedly teaches, economic and geopolitical interest are often put ahead of morals. This situation, however, is much more serious than a moral or economic question.

During the presidency of Donald Trump, Germany was given a choice: cooperate with the United States or cooperate with Russia. U.S. sanctions temporarily halted the construction of the Nord Stream 2 pipeline. Yet on January 24, only days into the Biden presidency, the Russian ship Fortuna began to work in the Baltic Sea to complete the pipeline.

This was the same day Russian protesters were brutally beaten and imprisoned. “The police did not even stop at women, children and old people,” Bild.de noted on January 25. “They even arrested minors and beat countless people into flight” (Trumpet translation throughout).

Nord Stream 2 benefits Russia economically and allows the regime to continue to oppress its people. But it doesn’t stop with Russia. Once the pipeline is completed, the Kremlin can cut off Ukraine from Russian gas supplies and force the country into submission.

Christian Democratic Union leader Armin Laschet is one of the strongest supporters of the controversial pipeline. When asked about foreign political concerns, he told faz.net on January 22: “Ukraine was concerned that it would be disconnected if the gas came to us via the Baltic Sea pipeline. However, the federal government has rightly made provisions in the treaties to protect Ukraine’s interests. This has also been made very clear to Russia. That is why I share the German government’s position on Nord Stream 2.”

In other words, the only guarantee the German government has is Putin’s promise. Yet it’s obvious neither Putin nor his Russian regime can be trusted. The way Russia dealt with its own people over the weekend reinforces its history of suppressing its own people and its neighbors. More than anyone else, Germans know that history—they have not only witnessed it but also played a part in it. Consider Adolf Hitler’s cooperation with Joseph Stalin, which led to World War ii.

Germany’s cooperation with Russia today is not only reckless but also malicious.

When asked if his position changed after the poisoning of Navalny, Laschet said, “The [attempted] assassination of Alexei Navalny must be condemned in the strongest possible terms. Russia must now arrest the perpetrators of the assassination instead of imprisoning Mr. Navalny. Moreover, I expect his immediate release. But the question of whether gas comes to us by land or by sea is independent of this.”

Every indication is that the assassination order came from the highest levels in the Russian goverment. Can you really expect Russia to lead a fair investigation of the matter? The state arrested Navalny the day he arrived. Yet Laschet’s only answer is that “Russia has a duty to apprehend the perpetrators of the assassination.”

When the entire world was talking about the 2018 poisoning of Sergei Skripal, a former Russian military officer and double agent for British intelligence agencies, Laschet doubted that the Russian state was the perpetrator. The facts have now been clearly established, but Laschet’s view on Russia hasn’t changed.

In fact, Germany’s stance on Russia doesn’t change much at all no matter what atrocity the Russian regime may commit. Trumpet editor in chief Gerald Flurry warned in “Germany and Russia’s Secret War Against America”:

In 2008, Russia shocked the world by invading the former Soviet nation of Georgia and bringing two of its regions under Moscow’s control—where they remain to this day. Germany said little about that, and did nothing. I wrote at the time that Germany’s silence probably meant these two nations had worked out a modern “Molotov-Ribbentrop”-type deal. …

Then in 2014, Putin struck again! Russia annexed the Crimea from Ukraine and asserted control over the eastern part of the country. Germany once again said little and did nothing! This was especially suspicious given the fact that just before the incursion, Ukraine had been on track to join the EU. You would think Germany would have been extremely angry at Russia! But not if it had previously agreed that Russia could have control of Ukraine, or part of it.

Mr. Flurry also pointed out that in recent years, European nations have grown more and more dependent on Russia for their gas supplies. Russia, in turn, has weaponized its energy, cutting gas supplies when it wants to pressure European states. “Before the Nord Stream pipeline, this was a somewhat dull weapon,” Mr. Flurry noted, “because if Russia wanted to cut gas to Ukraine, for example, it also had to cut shipments to nations downstream from Ukraine, which it may not have wanted to do.” But with Nord Stream 2, Russia will be able to cut off Ukraine and still deliver reserves to Germany. Given Russia’s recent invasion into Ukraine, it would be foolish to believe that this is not Russia’s plan.

Germany’s partnership with Russia is not just hypocritical, it is extremely dangerous. “History shows that Germany and Russia are not actually partners,” Mr. Flurry noted “When they enter into peace deals and economic partnerships, it is a signal that either or both are preparing for some kind of imperialistic exploit. This makes the Nord Stream 2 deal extremely concerning.”

As Mr. Flurry pointed out in his article, many passages in the Bible warn of Germany’s deceitful rise to power.

Jeremiah 1:13 speaks symbolically of “a seething pot; and the face thereof is toward the north.” North of Jerusalem today is modern Germany. The symbolism shows that Germany is about to violently explode, causing great havoc. “Beneath the surface, that nation is full of simmering dissatisfaction with the current world order,” Mr. Flurry warned. “Germans are angry at the U.S., and especially furious with President Trump. The imperialistic ambition that prompted Germany to start both world wars is alive and well. It is ‘seething’!”

Verses 14-15 read: “Then the Lord said unto me, Out of the north an evil shall break forth upon all the inhabitants of the land. For, lo, I will call all the families of the kingdoms of the north, saith the Lord; and they shall come, and they shall set every one his throne at the entering of the gates of Jerusalem, and against all the walls thereof round about, and against all the cities of Judah.” The “families of the kingdoms of the north” refer to a European superstate led by Germany. We are seeing this superstate building while Germany forges a dangerous cooperation with Russia. Everyone should beware Germany’s plot and wake up to the world’s dangers. But sadly few do!

I encourage you to read Mr. Flurry’s article “Germany and Russia’s Secret War Against America” and order a free copy of Germany and the Holy Roman Empire to understand why the Bible warns of this rising cooperation.