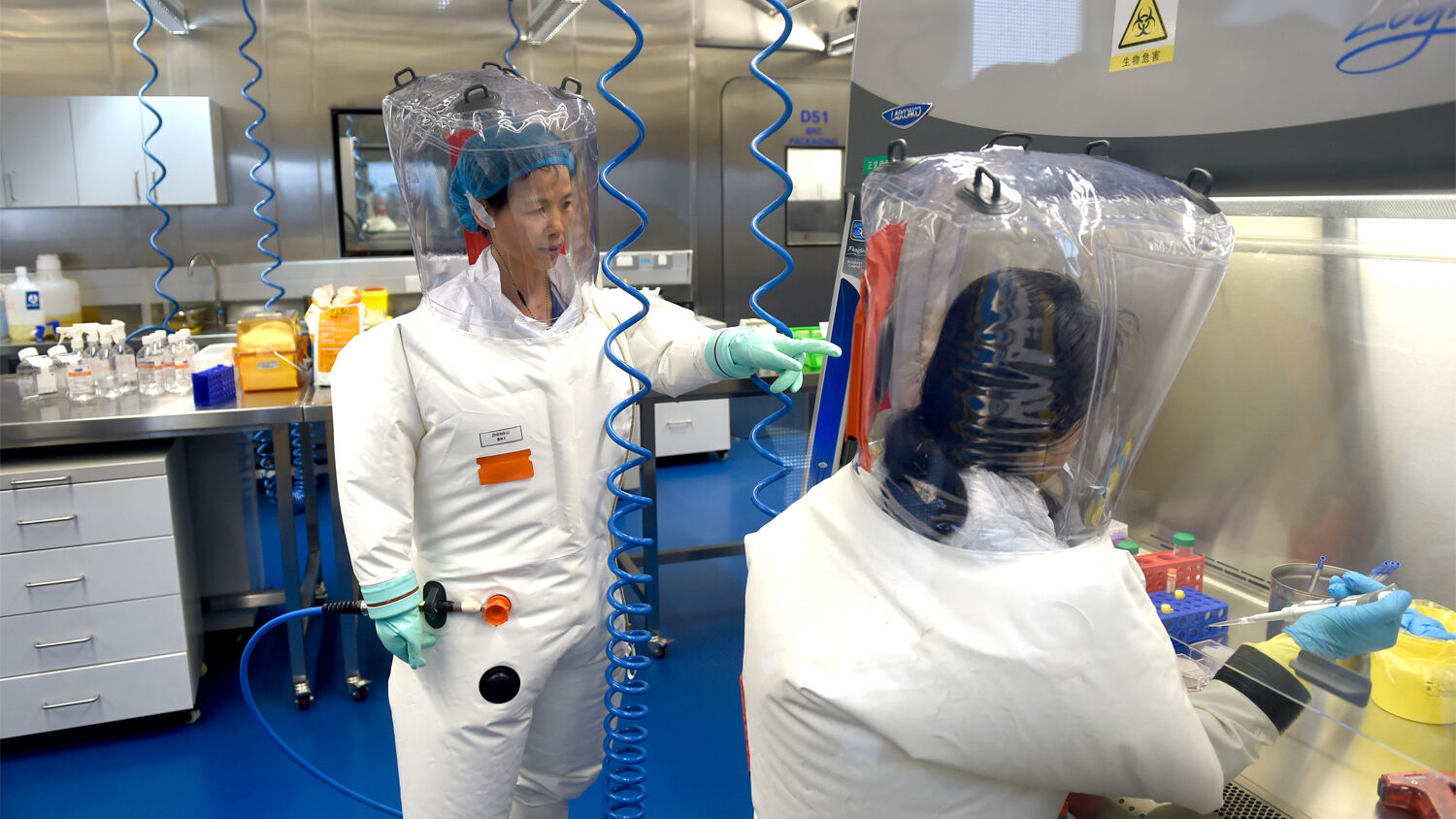 Virologist Shi Zheng-li (left) works with her colleague in the P-4 lab of Wuhan Institute of Virology in Wuhan in central China’s Hubei province.
Feature China/Barcroft Media via Getty Images

A new report may suggest so.

The State Department of the United States of America published a “fact sheet” on January 15 regarding the origins of the covid-19 virus in Wuhan, China. No “smoking gun” has been found confirming or denying that covid-19 is a manmade plague. But the report details much circumstantial evidence implicating the Chinese government.

The official story (at least originally) was that covid-19 originated in late 2019 at the Wuhan wet market. This is where patient zero supposedly caught the virus. Bats were among the live animals sold at the market. Research suggests that covid-19’s closest virus “relative,” with 96.2 percent similarity, is sars-cov-2, a coronavirus that infects bats and is known to cause fatalities.

The popular theory is that sars-cov-2, or a similar virus, infected another variety of animal at the market that already was sick with a different variety of coronavirus. The culprit many point the finger to is the pangolin, also called the scaly anteater. Certain research suggests that pangolins can contract a coronavirus also similar to covid-19. The bat coronavirus and pangolin coronavirus somehow meshed their dna together and created covid-19.

There are problems with this theory, however. First, pangolins weren’t sold at the market when the outbreak began. Second, the research suggesting the similarity between the pangolin coronavirus and covid-19 is questionable.

This could suggest it wasn’t a pangolin but an unknown host animal at the market that’s responsible. But an analysis revealed that none of the animals at the market tested positive for covid-19. Does that mean there is no primary suspect for the creation of covid-19? Now that there is no main suspect from the animal kingdom, who is left?

The Wuhan Institute of Virology, located 9 miles from the wet market.

The virology institute is China’s only Biosafety Level-4 laboratory. That’s the highest biosafety level possible. It’s the certification needed to keep and research the world’s deadliest diseases, like Ebola and anthrax. By comparison, America has six while Japan only got its first in 2015.

The covid-19 patient zero was apparently a researcher at the Wuhan Institute of Virology and didn’t visit the wet market. When this news broke out, the institute responded by saying that the person in question, Huang Yanling, left Wuhan in 2015. They wouldn’t give details as to where she is now. Her biography and photographs were deleted from its website. Western governments, media and intelligence agencies have been searching for Huang for a while now. As of this month, there is still no sign of her.

This is where the latest report from the State Department comes in. While lacking any direct evidence, it compiles enough circumstantial evidence to raise eyebrows.

The report states that, in autumn of 2019, several Wuhan Institute of Virology staff members contracted a disease with symptoms matching covid-19. Shi Zhengli, a prominent scientist at the institute who is a specialist in bat coronaviruses, claimed there was “zero infection” of covid-19 among institute staff. The State Department report calls Shi’s testimony into question.

It also reveals the Wuhan institute has kept samples of sars-cov-2 since 2016 for research purposes. After a 2003 pandemic of another variant of sars, the Wuhan Institute of Virology gained the reputation of being a leader in the field of coronavirus research. Their research includes studies of animals, including bats and pangolins.

This evidence is circumstantial. But what isn’t circumstantial is the Chinese government’s blatant destruction of evidence, war against journalists covering the story, and hindrance of outside observers from examining the evidence.

As early as December 2019, the government ordered the ceasing of virus tests and destruction of samples. The aggressive cleanup operation of the Wuhan wet market led some to accuse China of “disturbing a crime scene.”

It didn’t take long for China’s official story regarding how the virus originated to change. In March of last year, China’s foreign ministry accused the United States of starting covid-19. The claim was that Washington sent infected soldiers to an international event in Wuhan. There is no credible proof for this theory.

Last November, the story changed again. The Chinese government suggested covid-19 entered China through contaminated frozen food imports. The Wuhan market does distribute food imported from places like the Philippines and Brazil. One has to wonder then why covid-19 didn’t first spring up in those countries. Also, why would it be 96.2 percent similar to a Chinese bat coronavirus if it isn’t from China?

China also has made it very difficult for independent observers to document what is going on. Citizen journalists in China face constant harassment and threats of imprisonment from Beijing. Many have been arrested and detained for reporting on the virus. One journalist, Zhang Zhan, has been imprisoned, with her hands shackled 24 hours a day. The bat-filled caves from where sars-cov-2 was first identified have been closed off to the international press.

Meanwhile, the World Health Organization (who), initially quick to praise China for its response to the pandemic, was critical of Beijing for not allowing who scientists into the country to research the virus’ origins. who Director General Dr. Tedros Ghebreyesus said he was “disappointed” that China blocked the investigation—as two doctors already started their trip over. Negotiations gave the who the green light eventually. But this was still after months of the organization trying to get in. You would think that Beijing would want experts in Wuhan to study the virus. If covid-19 is a worldwide crisis, then it’s in the world’s interests—including China’s—to learn as much as possible.

Why is China being so secretive? Why the cover-ups? Why the mass arrests?

Another notable detail from the State Department report is that the Wuhan Institute of Virology is partnered with the Chinese military. The institute has been conducting biological experiments and classified research for the military since 2017.

Many suspect covid-19 to be a genetically-engineered bioweapon, or at least some kind of artificially designed disease. The fact that it is so similar to sars-cov-2, with a few differences that make it more transmissible to humans, is enough to raise a few eyebrows.

Shi Zhengli said that she’s open for scientists to examine the institute, claiming it has “nothing to hide.” Its press office later stated that she was speaking in her personal capacity and didn’t represent the Wuhan Institute of Virology.

It is so far uncertain whether China manufactured covid-19 in a laboratory or whether it is natural. If it came from the Wuhan Institute of Virology (which it probably did), it is also uncertain whether it was a deliberate or accidental release. China has a history of deadly diseases escaping from laboratories. A 2004 sars outbreak happened that way.

What is certain is that China definitely took advantage of the plague after people were exposed to it.

Trumpet editor in chief Gerald Flurry wrote in “Where Is the China-America Clash Leading?”:

It was only on January 23 [of last year] that the [Chinese Communist Party] ccp finally locked Wuhan down altogether. Many crucial days passed by while millions of people were leaving Wuhan for other parts of the world. …

[T]hroughout February, Beijing pressured “the U.S., Italy, India, Australia, Southeast Asian neighbors and others not to protect themselves via travel restrictions.” This pressure came even as China was imposing heavy restrictions on its own people!

It shows that there was pre-planning on China’s part, and that the nation willingly spread the plague.

In summation, covid-19 was originally thought to have come from the Wuhan wet market from animal-to-human transmission. Subsequent research has shown that the virus wasn’t present in any of the animals sold there. Patient zero was an employee at the Wuhan Virology Institute, 9 miles away from the wet market. The institute is China’s only Biosafety Level-4 facility and is a world leader in studying coronaviruses. One of its head researchers, Shi Zhengli, is an expert on bat coronaviruses. Bats were the original animal blamed for transmitting covid-19 to humans. covid-19 is over 96 percent similar to sars-cov-2, a bat coronavirus that can kill people. The Wuhan Institute of Virology is known to collaborate with the Chinese military in biological experiments. Chinese citizen journalists covering the story have been imprisoned. Patient zero has gone missing with little trace of where she has gone. The Wuhan wet market’s aggressive cleaning suggests a tampering of evidence. Reporters are denied access to the caves where sars-cov-2 was originally discovered. Beijing keeps changing its story as to how the virus came to be and blames an international introduction. When the virus began to spread in Wuhan, Beijing prohibited travel from Wuhan to other parts of China but encouraged international travel, including to America, Australia and the European Union.

Regardless of whether covid-19 was a deliberate introduction or an accidental leak in Wuhan, it seems pretty clear that China took advantage of the plague and wanted it to be spread to its economic competitors.

Even if covid-19 isn’t manmade, this would be the equivalent of launching a bioweapon against the West. This would mean the use of a weapon of mass destruction against the United States.

Under normal circumstances, this would mean a declaration of war.

And China has been subtly waging war against America for a long time.

I highly recommend you read our editor in chief’s new article “China’s Most Dangerous Maneuver Ever Against America.” It details one of China’s boldest and most threatening moves against America, one that will have global ramifications—even more so than the covid-19 crisis. Also read his article “Where Is the China-America Clash Leading?” It provides analysis you won’t find anywhere else.