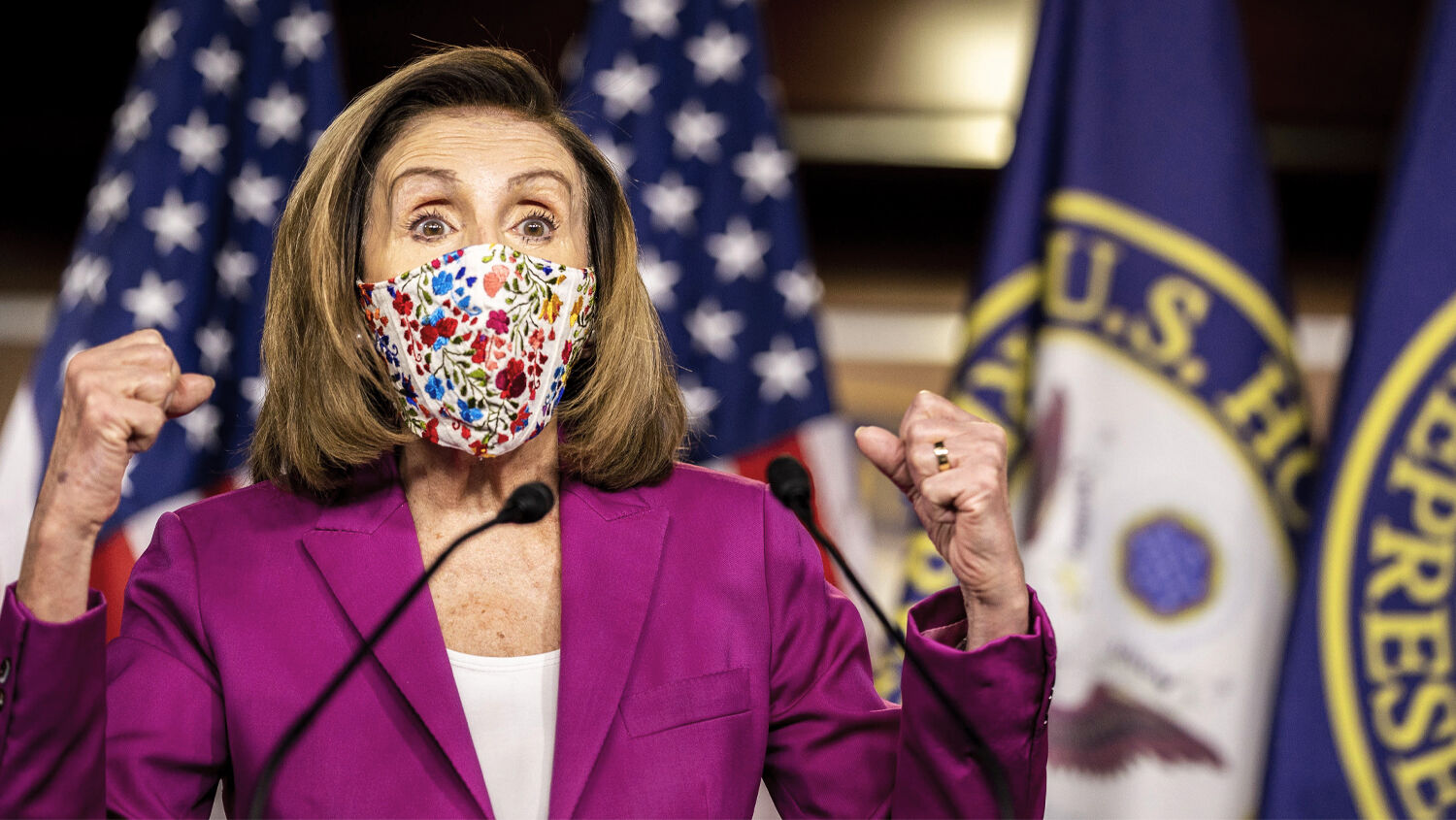 The House speaker is either the most impatient woman in America or is scared of what President Trump might do in the next eight days.

House Speaker Nancy Pelosi is leading a coup d’état against the United States government. Last week, she called Joint Chiefs of Staff Chairman Mark Milley to ask what she could do to prevent President Donald Trump from accessing nuclear launch codes. Then she attempted to coax Vice President Mike Pence into invoking the 25th Amendment to have President Trump removed from office. When neither effort succeeded, she introduced articles of impeachment to Congress.

Why is she so desperate to remove President Trump from office if he is going to be gone in about a week?

The impeachment articles introduced to Congress yesterday have more than 200 Democratic co-sponsors. They charge President Trump with “incitement of insurrection,” saying that he “gravely endangered the security of the United States and its institutions of government” by calling on his supporters to stage a “Make America Great Again Rally” in Washington, D.C., last week. Even though the president condemned the violence at this rally and reaffirmed that the Republican Party is the “party of law and order,” Democratic lawmakers still plan to hold an impeachment vote in the House of Representatives tomorrow.

Even liberal law professor Jonathan Turley says this snap impeachment is unconstitutional. Senate Majority Leader Mitch McConnell says the Senate would not have time to hold a trial until after the president has left office. So why hold the vote?

Pelosi is either the most impatient woman in America or scared of what President Trump might do in the next eight days.

Some Democrats are even talking about impeaching President Trump after he has left office, which probably isn’t even possible. But that does not matter to the radical left. The rules, the Constitution, the law—none of that matters. Pelosi even called the military to see if she could trigger a military coup d’état.

So who are the real authoritarians in America? Who are the tyrants today?

Radio personality Rush Limbaugh says the real reason Pelosi and the Democratic Party are unwilling to wait for President Trump to leave is that they are terrified he will expose their political corruption by declassifying confidential information. “Pelosi has called the military and put them on standby in case Trump launches the nuke codes. Whom are we going to nuke?” Limbaugh said last Friday. “What are they terrified of? They are terrified that Trump is going to unleash classified documents. You know he has a bevy of them, folks. He has classified documents about the hoax, the four-year coup. … There are all kinds of people who broke the law; all kinds of people who are quaking in their boots. They are worried silly that Trump is going to unleash some of these classified documents.”

In a 60 Minutes interview that aired Sunday night, Pelosi admitted that a significant motivation for President Trump’s impeachment is to eliminate any chance he has of being elected again.

The Democrats fear Donald Trump because he exposes them. They want weak-willed Republicans like Mitch McConnell and Ben Sasse who will stand by and let them destroy the Constitution.

We are witnessing the most astonishing attack on free speech in American history: President Trump and tens of thousands of his supporters have been banned from social media. Now the Washington establishment is doubling down in its efforts to ensure that the president cannot expose any more of their corruption.

My father drew particular attention to Nancy Pelosi when she was first elected speaker of the House in 2007. “The new speaker of the House is a Democrat from San Francisco, Nancy Pelosi,” he wrote in the January 2007 Trumpet. “This woman, who is now second in line for the presidency after Vice President Dick Cheney, is pro-abortion and pro-homosexual ‘marriage’; she wants to allocate federal spending for stem-cell research, which involves experimenting on unborn babies. Democrats are excited by the fact that endorsements of ‘San Francisco values’ now echo through Washington’s halls. Is this what America needs? … What did God think of these elections? … This election marks the final chapter for the United States. We mourn to see America’s downfall. We are about to see a tsunami of problems sweep over the world!”

These statements have turned out to be dead right. The radical-leftist takeover that started in 2006 has advanced to the point where liberals can steal elections and then silence anyone who dares criticize them for it. If these people get full control, they will utterly destroy America’s constitutional republic.

2 Kings 14:26-27 describe a crucial moment in Israel’s ancient history that is prophecy for modern Israel (for proof, read my father’s article “Why Donald Trump Will Remain America’s President”). That passage reads, “For the Lord saw the affliction of Israel, that it was very bitter: for there was not any shut up, nor any left, nor any helper for Israel. And the Lord said not that he would blot out the name of Israel from under heaven: but he saved them by the hand of Jeroboam the son of Joash.”

America today is suffering grievous affliction. These verses show that there is no one left who can help the nation—no one in Congress, no one in the courts, no one in the Trump administration. That is why God has to personally intervene and save America by the hand of an end-time type of King Jeroboam ii. If He did not, then the radical left’s coup d’état would succeed.

We are still in the final chapter of America’s downfall, but God is going to intervene in such a way as to allow His warning message to go out to the nation one last time (Amos 7:1-8). My father’s conclusion to his 2007 article rings truer now than ever: “We live in the midst of the most eventful moment in human history! God’s warning must be delivered before this tidal wave of catastrophes descends.”