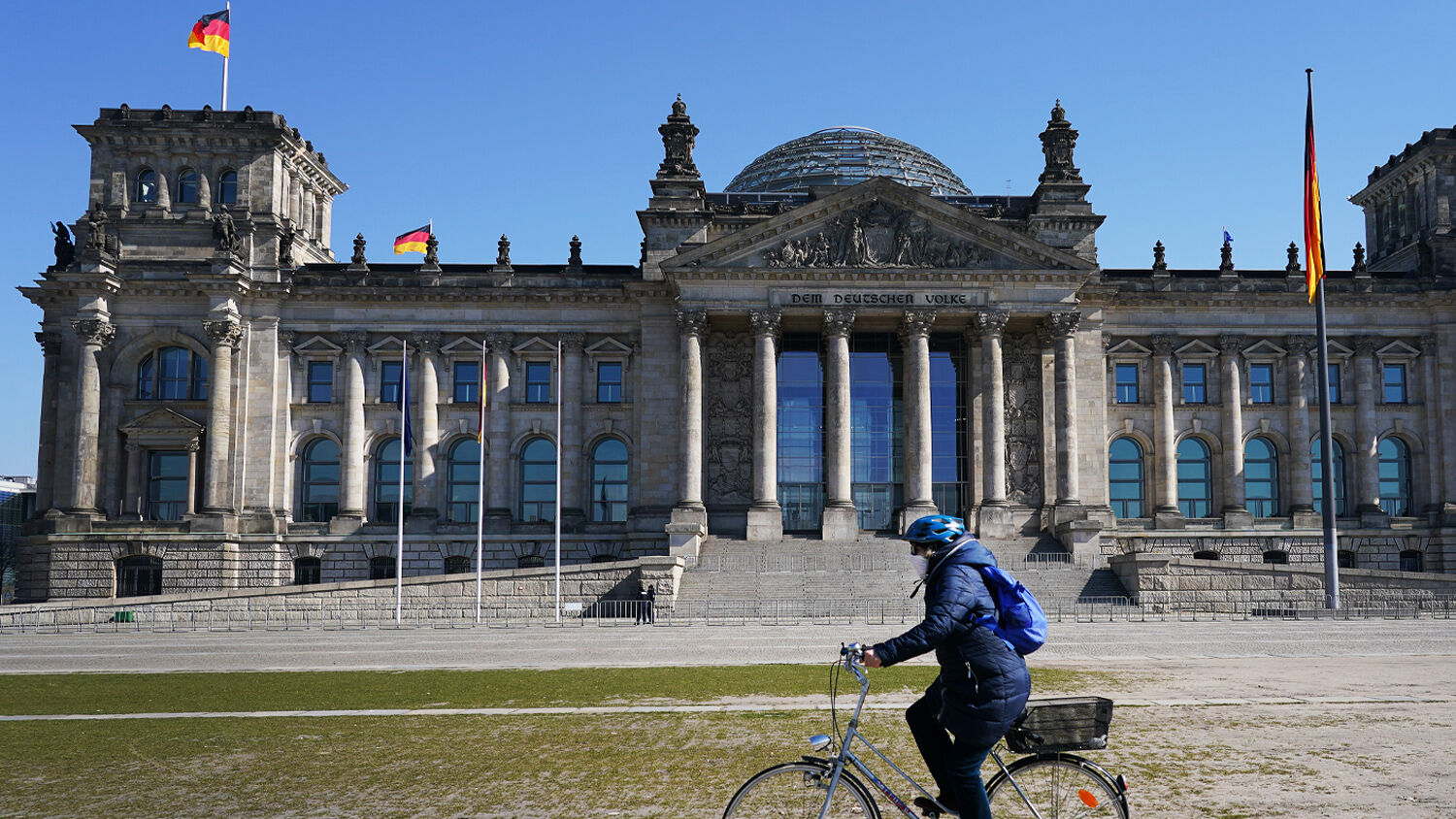 BERLIN, GERMANY - MARCH 25: A woman wearing a protective mask rides a bicycle past the Reichstag where, inside the Bundestag, a massive federal financial aid package is expected to be approved later today to shore Germany up against the effects of the coronavirus (COVID-19) on March 25, 2020 in Berlin, Germany. The Bundestag is expected to pass the package worth over EUR 150 billion later today.
Sean Gallup/Getty Images

The German government announced stricter coronavirus measures on December 5. At the same time, the government is criticized for failing to procure enough vaccines. Germans are now getting the impression that they are paying for their own government’s incompetence.

Over the past month, the increased lockdowns have not had the intended effect on the spread of the virus. “The number of new infections throughout Germany has not yet fallen to the necessary level to prevent the health system from being overloaded over the long term,” the German government stated. “For this reason, the federal and state governments have extended the regulations and contact restrictions that have been in force since the beginning of November until January 31, 2021” (Trumpet translation throughout).

One of the rules that has been extended is that members of a household can meet with a maximum of one additional person who does not live with them. The government also introduced a new rule nationwide: Depending on the number of infections in the various districts, the federal states are asked to limit citizen’s travel to 15 kilometers (9.3 miles) around their place of residence.

This rule was previously seen as a taboo, its effectiveness is questionable and its enforceability leaves police officers puzzled.

Many Germans had put their hope in the newly developed vaccine. Vaccinations would reduce the spread of the virus, and the government would rescind its restrictions, they hoped. But now the vaccine is being distributed more slowly than they hoped, and they are unsure whether a new strain of the virus will negate its value entirely.

A letter seen by German’s Bild newspaper reveals that the European Union forced national health ministers to leave procurement of the vaccine to the European Commission. Bild.de stated that the health ministers had “to humbly apologize for their efforts to obtain the vaccine.” It said that while others wanted to make a sufficient amount of the vaccine available to all Europeans, Merkel “wanted to make the procurement, as a big gesture, a matter of the [European Union].” The result has been disastrous.

German Chancellor Angela Merkel defended the decision: “The federal government and the states welcome the fact that the EU has jointly ordered vaccines. It is a correct and important goal that is in the German interest. We don’t want to do it alone at national level.”

But while some see it as a victory for Europe, others see it as a loss for everyday Europeans.

The German government has been heavily criticized by some in the German media. “Ignorance Dictates Germany’s Toughest Lockdown,” Die Welt stated on January 5. But while some question the data that the recent measures are based on, others believe the governments half-heartedness is at fault. “The Lockdown Extension Is Tough—But Dangerously Inconsistent,” Tagesspiegel stated on January 6.

Bild.de summarized the recent government lockdowns this way: “probations, self-praise, fingerpointing: The most absurd Merkel paper of all time!”

Prior to the start of the coronavirus crisis about a year ago, Germany’s mainstream parties were at record lows in the polls. The recent crisis has temporarily relieved them of this pressure. People are putting their trust in those in power, hoping for stability and willing to relinquish their freedoms to get it. But the crisis now seems to be damaging the political establishment.

An even bigger crisis than the coronavirus is Germany’s leadership crisis. For year’s Chancellor Merkel seems to have weathered every storm that blew through Germany, while no leader next to her remained standing. In 2018, Chancellor Merkel passed the leadership of the Christian Democratic Union to Annegret Kramp-Karrenbauer. But she lasted only a year before the party decided to choose a new leader. The cdu’s party congress is scheduled for January 16 and the question of who will lead the party thereafter has never seemed more uncertain.

The coronavirus overshadowed this crisis for months. But the question now reemerges with greater urgency and added difficulties.

Germany’s next leader must not only have Merkel-like resilience to weather storms but also lead Germany in uncharted waters. In his Spiegel Online guest contribution “The CDU Needs Clear Leadership,” Friedrich Merz, a candidate for cdu party leadership, put it this way: “The starting position of the cdu for the federal election is only good at first glance. It is not enough to just call on centrism. Political leadership is needed now.”

German federal elections are scheduled for 2021, and Germany’s main political party is completely divided over who its possible candidates will be. But it’s not just Germany that is in crisis. All of Europe is facing overwhelming crises.

Though few realize it, the Bible contains prophecies for our day that foretold Germany’s dilemma and its outcome. Daniel 11:21 states: “And in his estate shall stand up a vile person, to whom they shall not give the honour of the kingdom: but he shall come in peaceably, and obtain the kingdom by flatteries.” Daniel 8:23 states: “And in the latter time of their kingdom, when the transgressors are come to the full, a king of fierce countenance, and understanding dark sentences, shall stand up.”

It takes unprecedented times for such a prophecy to be fulfilled. But as Mr. Flurry explains in Daniel—Unsealed at Last! we are now living in such times. Request your free copy of Mr. Flurry’s booklet today to learn how Germany’s leadership crisis will result in a shock to the whole world.