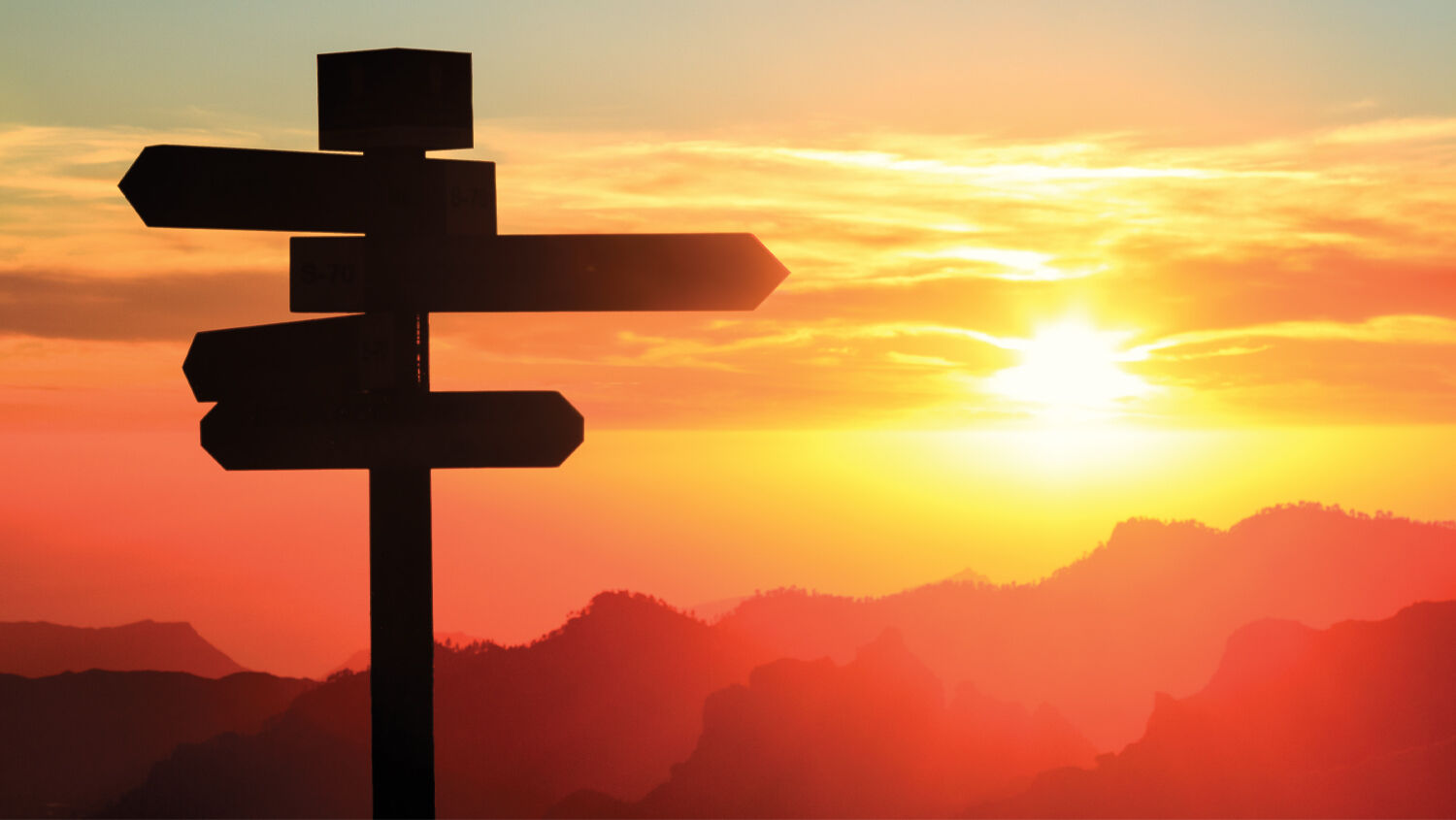 These are great days! What a time to be alive and to support God’s work! God our Maker is reaching out to this dark and dying world in its last days. He is pleading for repentance and change before it is too late physically. But most people don’t see Him. Most people don’t recognize what He is doing.

God is mercifully passing by our nations with His message—one final time (see Amos 7:8). He is sounding the alarm one final time before the terrible suffering of the Great Tribulation that Jesus Christ prophesied. He is also proclaiming His message of hope: After our governments and peoples succumb to that deadly global cataclysm, He will return and establish His government (Matthew 24:21-22). This is mankind’s only hope!

The Trumpet has been discussing important history from ancient Israel about the reign of the first Jeroboam (10th century b.c.) and Jeroboam ii (eighth century b.c.). Between these two reigns, 11 other Israelite monarchs ruled for about 115 years. This history is covered in the biblical book of Kings. The modern descendants of the kingdoms of Israel and Judah are the Americans, the British, the Jews and other British Commonwealth nations. God preserved this history for more than 2,800 years because it is also prophecy for today! The end-time Jeroboam is President Donald J. Trump.

Trumpet readers are now familiar with this history. But there is much more to the story, and you can read about it in the same book of Kings (2 Kings 14:23-29). In fact, it’s right in the middle of this history. I’m referring to the role of God’s work as administered through His faithful prophets, Elijah and his faithful successor, Elisha.

This history shows you how to find the work of God.

Elijah, whose name means “my God is God,” took God’s message to the sinning nation and sinning kings of Israel (read 1 Kings 17-19). Elisha’s ministry is recorded in 2 Kings 1-13. There were many other prophets and sons of the prophets during this time, but God records more detail about Elijah and Elisha because these two prophets were forerunners of two godly servants who would appear in these last days!

For nearly a century, Herbert W. Armstrong and Gerald Flurry have prophesied in the spirit of Elijah and Elisha. They have warned our nations that our sins against God and His government are leading to national calamities and captivity. They have proclaimed the hope of the true gospel: Jesus Christ is about to return and rule the world from Jerusalem.

Like their ancestors in the days of Elijah and Elisha, the modern Israelites in America and beyond are ignoring God’s message. Many don’t know it exists—or that He exists! Many believe in false ideas of God, “false Christs and false prophets,” as Jesus prophesied in Matthew 24. Men like Elijah, Elisha and even Christ were mostly overlooked or opposed by their contemporaries!

Notice what Christ told the Jews of His day: “But I tell you of a truth, many widows were in Israel in the days of Elias [Elijah], when the heaven was shut up three years and six months, when great famine was throughout all the land; But unto none of them was Elias sent, save unto Sarepta, a city of Sidon, unto a woman that was a widow” (Luke 4:25-26). With Israel and its widows languishing in famine, God sent Elijah to none of them. Why? What point is Jesus making?

These Jews knew about Elijah and assumed he had been sent to shake Israel, to perform many mighty miracles, to help widows and heal multitudes. They assumed that if Jesus were a true servant of God like Elijah was, He would be shaking their nation such that thousands of people and many top leaders would recognize it and follow Him.

But Elijah didn’t. Neither did Christ. Neither does God’s work today.

During that famine, God sent His servant out of Israel altogether. He lived instead in a pagan Gentile city, assisted by a widow. People saw no powerful, popular, universal work of God. Even people in Elijah’s nation, God’s nation, did not recognize it as the work of God. Yet it was the work of God!

So when you’re looking for answers to the insanity in this nation and this world, it would be wise to look not for something favored by the masses (whether liberal or conservative), but something favored by God! Find His message, the message of the Bible! And if you can’t find it in the political or religious power structures of the nation, look elsewhere—just make sure it matches the Bible.

“And many lepers were in Israel in the time of Eliseus the prophet; and none of them was cleansed, saving Naaman the Syrian” (verse 27). Jesus pointed out that God’s work was the same with Elisha. The Bible records him as being involved in one healing, not scores of dramatic healings that attracted huge crowds and powerful support.

What were these men of God doing?

A Prophet Without Honor

Remember, the one speaking here is Jesus Christ! He did perform miracles of healing, yet even the Son of God coming to Earth was mostly ignored or opposed by humanity, by His own nation, even by His own town!

“They didn’t understand the Elijah work,” my father writes in From the Beginning. “Elijah was only sent to one widow. He was primarily sent to reveal the true God. That was his mission or purpose. He was not sent to save widows or to heal people. If the Jews had listened to John the Baptist—a type of Elijah—they would have known who the Son of God was! To this day, they still don’t know.”

This is the teaching of the Bible! People expect God to reveal Himself on their terms. They build religions and entire civilizations on their own terms. But the lesson of all human history now staring us in the face is that this doesn’t work! Our only hope is to seek God on His terms!

“And they were offended in him. But Jesus said unto them, A prophet is not without honour, save in his own country, and in his own house” (Matthew 13:57). This was an unpopular, uncomfortable teaching! Religious people rejected it, and God and Christ allowed them that choice.

Jesus had been expounding on prophecies with these Jews, and Luke 4:22 says, “And all bare him witness, and wondered at the gracious words which proceeded out of his mouth. And they said, Is not this Joseph’s son?” They might have been willing to hear such instruction from a member of the Sanhedrin, from the ancient equivalent of a “spiritual adviser to the president.” But they were unwilling to hear it from this carpenter’s son!

“For Jesus himself testified, that a prophet hath no honour in his own country” (John 4:44). What a crucial lesson for us today. If you are looking for the work of God, you won’t find it in a powerful political or religious organization with multitudes of followers. You will find it in a place that teaches what Jesus Christ taught, a place probably about as popular now as Jesus was then.

Notice another teaching of Jesus in Matthew 17:10-12. He prophesied that just before He returned to rule the world, a man would come in the same spirit that had empowered Elijah and John the Baptist. That man has come! He did great things for God, and people recognized there was something special about him and his work. In the Philippines and other nations, crowds gathered to welcome him and hear him speak. World leaders met with him to discuss the most important questions, the human condition, the way to peace; these leaders included Anwar Sadat and literally dozens of other presidents, prime ministers, legislators, judges and executives.

This man was Herbert W. Armstrong. Kings, queens, emperors, presidents and prime ministers of many nations honored him. But did the people of his country, the United States, honor him? Not nearly as highly. He led a Church that proclaimed God’s message globally, but at its largest, how did its membership compare to the American mainstream and evangelical churches? One tenth of 1 percent.

This is a fundamental principle of finding and following the work of God and thereby following God. If you understand it, it actually makes you a little uncomfortable. All of us have this human tendency to look at the world and even God Himself according to our own ideas of right and wrong. It was true in Elijah’s lifetime; it was true in Jesus Christ’s lifetime; it is true today.

This deep flaw in human nature almost caused the premature end of Jesus’s human life! “And all they in the synagogue, when they heard these things, were filled with wrath, And rose up, and thrust him out of the city, and led him unto the brow of the hill whereon their city was built, that they might cast him down headlong” (Luke 4:28-29).

This is human nature!

We see outrageous examples of people talking about “alternative facts” and “my truth.” But the fact is, all of us have flawed human reasoning and self-deceptive human nature (Jeremiah 17:9). When God shows us actual facts and the actual truth, we can do the uncomfortable thing and admit we are wrong, or we can rise up and thrust it from our minds.

John 10:40-41 say Jesus went beyond the Jordan River, away from the centers of power for the religious people of His day, to a place “where John at first baptized; and there he abode. And many resorted unto him, and said, John did no miracle: but all things that John spake of this man were true.”

Wow! John the Baptist—a type of Elijah, the man who prepared humanity for the coming of the Son of God—did zero miracles! Yet Jesus Christ said no greater man had been born of a woman (Matthew 11:11).

“All things that John spoke of Christ were true,” my father writes in From the Beginning. “Everybody at that time and throughout history should have known who Jesus Christ was. John’s purpose was to reveal the true God—the real Christ. He revealed all about the Lord from the beginning—the God who became Jesus Christ.

“Mr. Armstrong didn’t perform many great healings or do numerous miracles. He didn’t shake the nations as one Laodicean group said the Elijah would. But he did reveal the true God, which was why God sent him!”

Even if you are conservative, religious and devout, you need to be corrected. You need to let God show you the truth. You need to compare what you hear and what you think to the one and only source of truth: God Himself! Pray earnestly and humbly to Him, and He will answer you. He will show you where Jesus Christ is today. And if that work of God happens to be in your own country, it is up to you to decide whether to honor it.