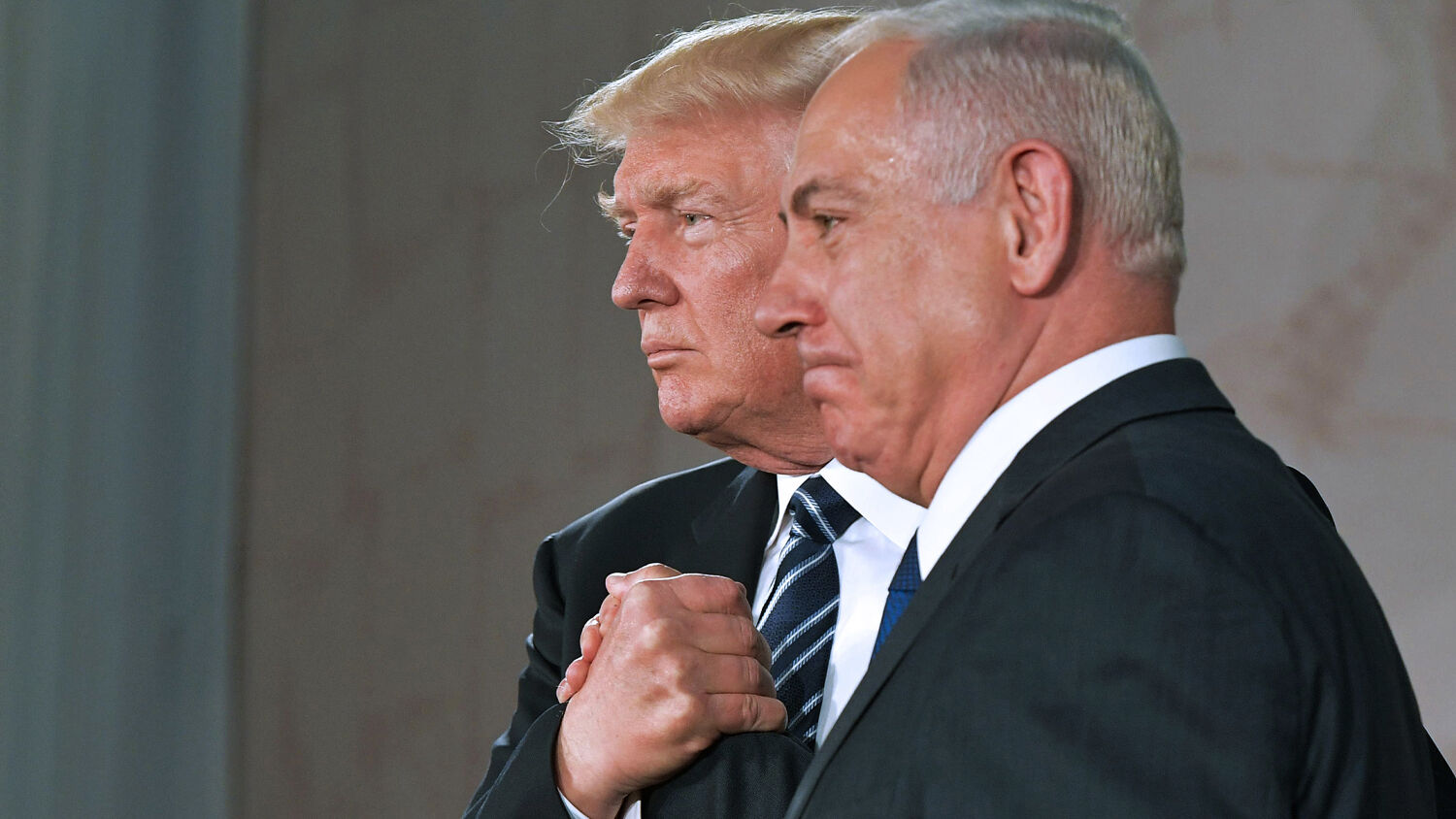 U.S. President Donald Trump (left) and Israeli Prime Minister Benjamin Netanyahu after delivering a speech at the Israel Museum in Jerusalem on May 23, 2017
MANDEL NGAN/AFP/Getty Images

jerusalem
In the span of four months, United States President Donald Trump has netted four Middle East peace deals between Israel and Arab states. The latest came last week when Mr. Trump announced that the North African nation of Morocco was ready to formalize ties with the Jewish state. These deals are an incredible feat of diplomacy.

Shockingly, you probably haven’t heard too much about them.

An inward-focused American population coupled with an anti-Trump mainstream media means that the president’s stunning achievements have been covered up and ignored.

The media could not afford to dwell on Trump’s Middle East successes, especially during the election cycle. Support for Israel remains one of the only issues that enjoys broad consensus among all American voters. Airing stories about the president’s pro-Israel moves would be tantamount to lobbying for Trump. And that couldn’t be.

Nevertheless, what President Trump is accomplishing in the Middle East is absolutely staggering. And everyone in the region, both ally and adversary, understands that.

How Did He Do It?

In the space of four years, Mr. Trump has upended the false notion that peace between Arab states and Israel was only possible after a comprehensive peace deal between the Jews and the Palestinians. President Trump correctly demanded that the intransigent Palestinian leadership no longer be allowed to roadblock Israeli peace with Arab states.

Amazingly, the Arab world agreed with him.

President Trump, through his Middle East team headed by son-in-law Jared Kushner, told Arab leaders that they had more to gain by working alongside the Jewish state than against it. Furthermore, Arab leaders were already frustrated with Palestinians after they rejected several serious Israeli overtures toward peace.

They were ready to make a deal.

President Trump also had one other factor that pushed the Arab states to negotiate: the shocking betrayal of America’s Arab allies by Trump’s predecessor.

The Obama administration worked tirelessly to recalibrate the Middle East in favor of America’s archenemy in the region, the Islamic Republic of Iran. This culminated in the Iran nuclear deal which, at best, delayed Iran’s nuclear ambitions by a decade, but it secured for Iran the mountains of cash it needed to aid the Assad regime’s war crimes in Syria, take over Iraq through its own fighting militias, and perpetuate civil war in Yemen.

Concurrently, Obama also spoke of Saudi Arabia’s need to “share the neighborhood” with Iran. Sounds pleasant, but Saudi Arabia and other states understood that when you hear a murderous neighbor trying to break down your front door, you don’t unlock it for him.

The treacherous Obama administration proved to America’s Middle East allies that the U.S. could no longer be trusted as a stalwart ally to defend them from Iran’s expansionist goals. And even if there were a change of administration that favored American’s traditional allies, that too would be temporary.

This means that even before President Trump was inaugurated, the Arab world was already looking for a more permanent solution to its long-standing reliance on the United States for protection from Iran.

Then, when President Trump came into office, he publicly announced to all that the U.S. had no desire to continue policing the Middle East. This meant the Arab states had to get serious about finding a more permanent solution to their security.

And naturally, Mr. Trump was ready to provide that solution: publicly ally with the State of Israel.

Clear-eyed Arab leadership understands that while the U.S. might become indifferent to Middle East affairs, Israel is in the same boat with them, facing off against the Iranian surge. This need for collective security against Iran necessitated that Arab states publicly recognize their relationship with Israel. And as observer George Friedman wrote this week, “given the politics of the region, recognition may as well as be an alliance.”

That is not to say that Arab states are only interested in peace deals with Israel because of the Iranian threat. They have much to gain from sharing the Middle East with Israel, including making use of Israel’s tremendous technology sector.

The Trump administration also threw in benefits to sweeten the deals.

The United Arab Emirates will be allowed to purchase 50 much-coveted American-made F-35 fighter jets, the premier offensive weapon in the sky. Sudan was taken off the U.S. state sponsors of terrorism list, which will allow companies to invest in the North African state without fear of American financial sanctions. And most recently, as part of the Morocco deal, President Trump officially recognized Moroccan sovereignty over the disputed territory of Western Sahara. From America’s perspective, these “gifts” were long overdue in the case of Morocco and Sudan, and in the case of the F-35s, it is American companies that will benefit from the sale.

Put together, through these few U.S. deal sweeteners, and by playing up America’s exit from a region under a real Iran threat, the Trump administration has been able to shake up the Middle East in Israel’s favor.

And President Trump isn’t done. Israeli commentator Caroline Glick wrote this week that “three or four other Arab states are likely to join the circle of peace in Trump’s final weeks in office.”

To put these deals in perspective, it took 40 years for Israel to attain its first two peace deals with Arab states: Egypt in 1978 and Jordan in 1994. Now in the past four months, President Trump has added four more, with the likelihood of more before his first term ends.

Clearly, the speed of these America-brokered Israeli-Arab peace deals is historic.

But few understand that it is also prophetic.

As Trumpet editor in chief Gerald Flurry wrote in the January 2021 Trumpet issue, the restructuring of the Middle East between the radical Islamist camp led by Iran and the more moderate Arab states is one of our long-standing forecasts informed by biblical prophecy. You can read more about those prophecies in his article “Deadly Flaw in Mideast Peace Deals.”

But another prophecy is also playing out, relating specifically to the administration of President Donald Trump and his relationship with the modern State of Israel.

As Mr. Flurry explains in his free booklet Great Again, President Trump is a type of the ancient Israelite king Jeroboam ii, a truth that forecasts President Trump will remain in office for a second term.

At the time of Jeroboam ii’s reign at the start of the eighth century b.c. the people of Israel were divided into two nations, the northern 10 tribes known as the Kingdom of Israel, and the southern kingdom of Judah (the Jews).

Jeroboam ii ruled over the kingdom of Israel for four decades. Prior to his reign, the nation was on the verge of collapse. But under Jeroboam ii, the northern tribes of Israel experienced a massive resurgence in material wealth, territory and national power. Both the biblical text and archaeology attest to this fact. However, Jeroboam ii and his followers in the northern kingdom failed to acknowledge God’s merciful hand as the reason for their increased prosperity (2 Kings 14:26-27).

Instead, they claimed it was their own strength that made Israel great again.

At the time, God sent the prophets Hosea and Amos to Jeroboam to plead with the Israelites to repent lest they go into captivity. That message went unheeded, and within a few years of Amos’s prophecy, the mighty Assyrian Empire started to engulf the northern tribes.

History also bears out that a simultaneous resurgence occurred in the southern kingdom of Judah under King Uzziah at the same time Jeroboam ii was in power in the north. Trumpet contributing editor Brad Macdonald’s article “A Prophesied Resurgence in Israel” explains this historic parallel of the southern kingdom of Judah to the modern State of Israel.

Both Israel and Judah were rising at the same time anciently. There is also an indication from the Bible that the resurgence in Judah was linked to Jeroboam’s direct influence (verse 28).

Today, we see a similar phenomenon taking place in the relationship between the modern Jeroboam ii and Judah, the modern State of Israel.

It might seem outlandish to believe that President Trump’s rise and his relationship with Israel was prophesied thousands of years ago. However, the pace of President Trump’s deals for the Jewish state is also completely unprecedented in history. And if Bible prophecy is our guide, there will be more.

For more understanding about President Trump’s role in prophecy, and what we can expect from his second term in office, please read Gerald Flurry’s article “Why Donald Trump Will Remain America’s President.”

You can also learn more about the ancient Jeroboam II by listening to the latest Watch Jerusalem podcast found below.