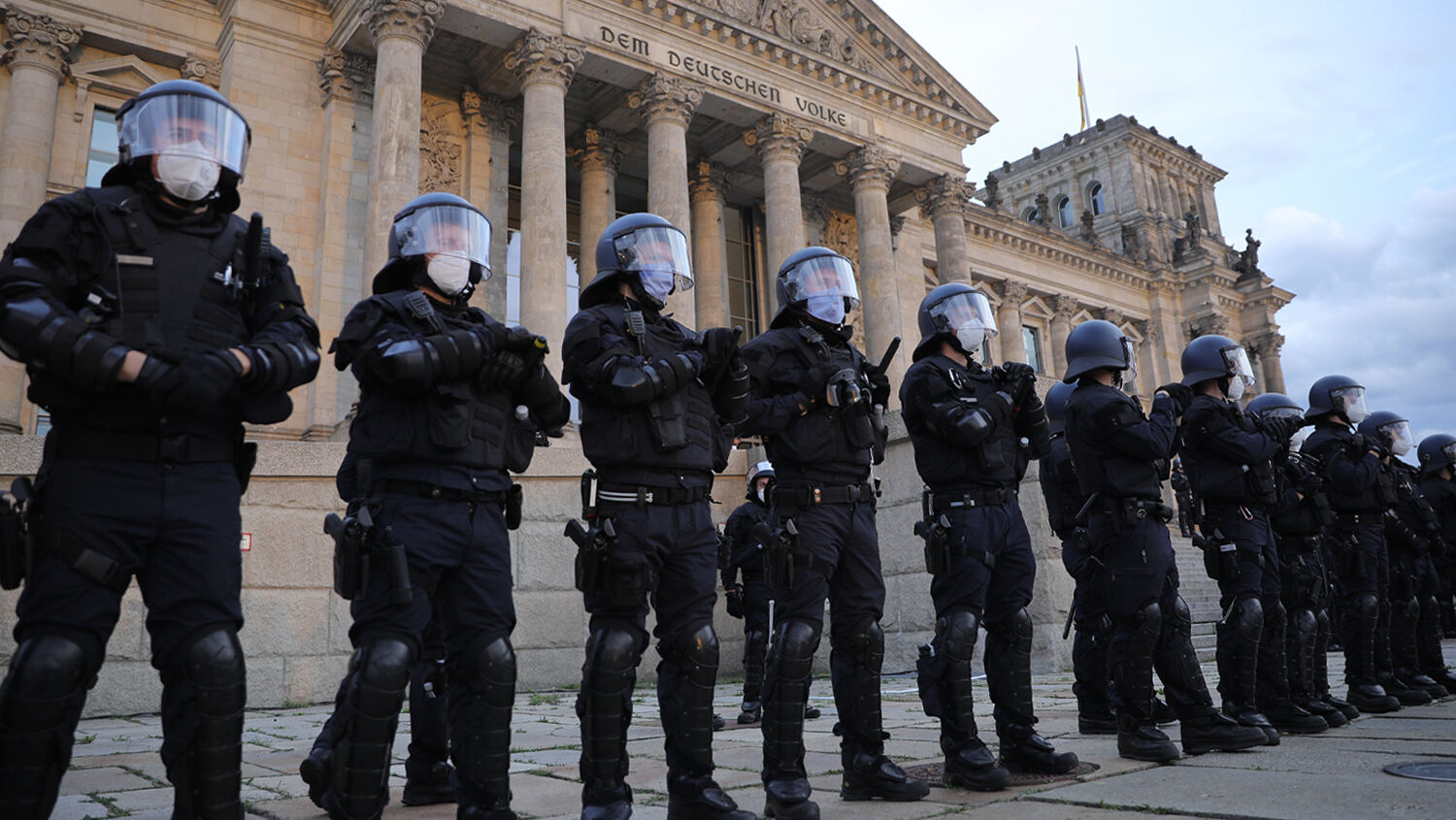 The group first showed signs of potential danger in early 2018, when a bag with weapons and a T-shirt with the slogan “Sturmbrigade 44 Köthen-Anhalt” was found on a train. Members of the group have also been found taking part in far-right demonstrations. In July 2019, the federal government classified the Sturm-/Wolfsbrigade 44 as a right-wing extremist group with supra-regional structures. Investigations found that the group consciously follows National Socialist tradition. The group’s aim is to “re-strengthen a free fatherland” in accordance with the “Germanic moral law.”

The number 44 is a code among neo-Nazi groups. The “4” stands for the fourth letter of the alphabet. DD is the abbreviation for “Division Dirlewanger.” Oskar Dirlewanger led a special unit of the Waffen-SS, responsible for some of Germany’s worst war crimes, and was particularly sadistic.

Sturmbrigade 44 shows the tragic reality that such men are still honored in parts of Germany.

Flaws within Germany’s legal system allow for such veneration. According to the Interior Ministry, raids in Saxony-Anhalt were also planned for December 1. However, the Halle Administrative Court and the Magdeburg Higher Administrative Court did not recognize a sufficient basis for search warrants.

The Halle Administrative Court should be especially careful what groups and mentalities it allows to flourish in its region. Just last year, a right-wing extremist attempted a mass shooting on a synagogue in Halle. The shooter, currently on trial, said his only regret is that he failed to execute his blood bath. This attack alone shows how dangerous Germany’s far-right demographic is.

Jewish survivors of the attack have accused the police of failing to appropriately investigate far-right extremism online, which potentially inspired the attack on the synagogue. But what if the negligent investigation was due to far-right sympathy among police officers?

Synagogues in Germany are generally under police protection. That alone is a sad fact, as German Chancellor Angela Merkel once noted. But the Halle synagogue was not protected by the police on October 9—despite it having been the date of a Jewish high day. Did the police know about the planned attack in advance and vacate? No serious investigation is underway.

The thought that police officers could be cooperating with far-right extremists is alarming. But it needs to be considered.

The police in Germany’s most populous state, North-Rhine Westphalia, have also received negative publicity of late. “Right-Extremist Police Officers: An Official Made the Hitler Salute While Standing on Two Company Cars,” declared a December 2 headline on Die Welt. Could such a police officer be trusted to lead investigations into the far-right spectrum?

Die Welt summarized some of the shocking findings within North-Rhine Westphalia’s police circles:

The scandal surrounding right-wing extremist chats by police officers in nrw is expanding. …

The police behaved like neo-Nazis in their bowling club. In their WhatsApp group “Kunta Kinte”—named after the African slave from the novel Roots—the 15 officers, two of whom are already retired, not only meet for bowling trips. They sent each other pictures of Adolf Hitler as well as xenophobic, right-wing extremist and anti-Semitic messages.

The officers shared memes showing the swastika, a refugee in a gas chamber, and a black man being shot. This after 29 police officers working in Essen, North-Rhine Westphalia, were suspended in September for participating in far-right online chat groups.

It has also been found that a small group of police officers have sent threatening e-mails to human rights activists and left-wing politicians signed with “Heil Hitler” and NSU 2.0, referring to a former far-right domestic terrorist group in Germany.

“We have to draw conclusions at an early stage,” North-Rhine Westphalian State Interior Minister Herbert Reul noted. “I don’t want those who are under suspicion to continue to be in uniform and with service weapons. … We feared all of this. We have always said: The more we search, the more we will find. It’s nothing surprising, and yet every one of these images shakes me.” One hundred ninety-one police employees are now under investigation.

But Reul strongly opposes any general suspicion against the police corps. He believes that the “overwhelming majority” of the 56,000 police officers perform “impeccable and good work” and embody the free-democratic basic order.

“The searches are another success in the fight against right-wing extremism among the police in North Rhine-Westphalia,” Die Welt noted. “The longer it lasts, the more the suspicion that these are not isolated cases is confirmed.”

Some call the findings a success, and say Germany’s effort to fight right-wing extremism is heroic. But why does Germany have so many neo-Nazi conspiracies in the first place? Trumpet contributing editor Richard Palmer wrote in the October 2020 issue that the recent findings are “reminiscent of another far-right leader who received only a slap on the wrist for his attempt to overthrow the government in 1923—Adolf Hitler.”

Considering the warning that history offers, Germany’s approach to this issue is shocking. New York Times’ Berlin bureau chief, Katrin Bennhold, noted one of the main problems in the investigations: “The charges brought are often woefully narrow for the elaborate plots they are meant to deter and punish. Almost always they focus on individuals, not the networks themselves.” This should raise some questions, as Mr. Palmer noted:

Why is far-right extremism such a systemic problem? Why do those involved repeatedly get off so lightly? Why have the police, the military, the special forces and the intelligence agencies repeatedly been implicated? Why are so many investigators complicit? Why are so few punished? And if so many are willing to act on these kind of beliefs—to the point of stockpiling weapons and assembling hit lists—how many more sympathize from the sidelines?

This is the crucial question that too few are asking: What does this mean for modern Germany?

We have to get to the cause of all these neo-Nazi uprisings to understand what Germany’s future holds. It is not a coincidence that the same mentalities of over 75 years ago are reviving in Germany today. The late Herbert W. Armstrong warned on May 9, 1945:

This is crucial to understand what is happening in Germany today.

Mr. Armstrong largely founded the Plain Truth magazine to warn the world of Germany’s rise as prophesied in the Bible. But he also proclaimed the good news of God’s coming Kingdom to put an end to the world’s horrifying problems (Matthew 24:14). The Trumpet under the leadership of Gerald Flurry continues this same warning message today (Revelation 10:11).

If you want to understand how Mr. Armstrong was able to forecast the news headlines of today, request your free copy of He Was Right. This booklet will not only help you understand the biblical prophecies that foretell Germany’s rise, it will also show you what great hope there is in God’s warning work.