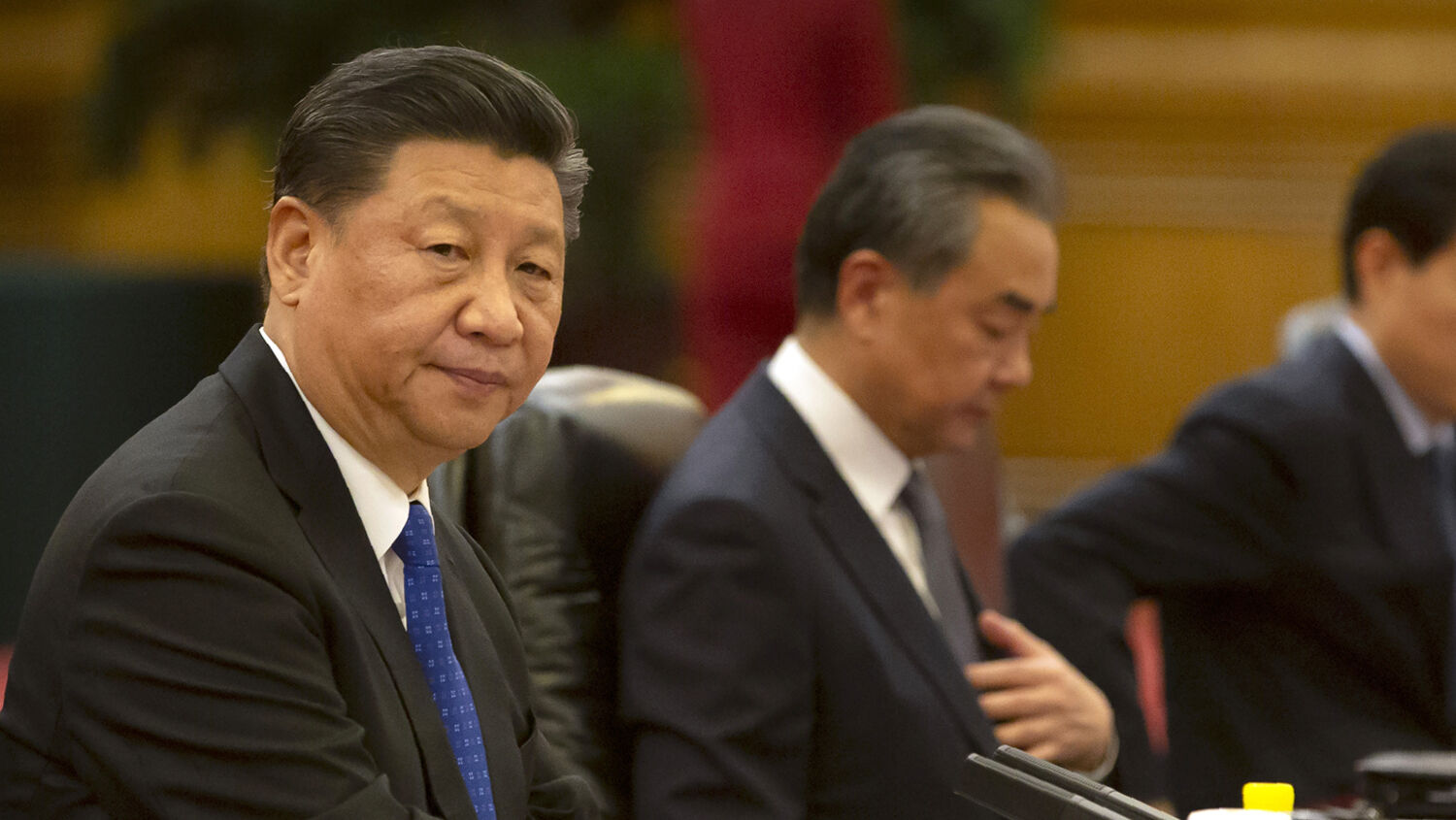 On Monday, November 30, Chinese Ministry of Foreign Affairs spokesman Zhao Lijan posted an image on the government department’s official Twitter feed. The fake photo portrays a grinning Australian soldier holding a bloody knife to the throat of an Afghan child. The caption reads, “Don’t be afraid, we are coming to bring you peace!”

The tweet immediately drew condemnation from Australian Prime Minister Scott Morrison who called the image “repugnant.” The prime minister demanded an apology from the Chinese government.

The image is the latest in a series of tweets from Zhao in response to Australia’s inquiry into the conduct of its soldiers during the Afghan war. Rumors of Australian soldiers killing children were never substantiated in the four-year inquiry or report.

The tweet marks a new low in diplomatic relations between the two nations. China once veiled its criticisms behind state media; now its officials are openly provoking Australia with cheap taunts and jibes. Such antics should not be casually dismissed.

Admit it or not, Australia is in the midst of a trade war with its largest trade partner. And it is losing—badly. This is what happens when doves try to befriend dragons.

The Downfall of the Relationship

Maintaining a cordial relationship with a human-rights-violating nation like China was never going to be easy. The friendship between the Australian dove and the Chinese dragon morphed dramatically when China began gobbling up resources in the 1980s. Urbanization and free-market reform saw the dragon quickly outgrow its dovish neighbor with an average gross domestic product growth of 9.5 percent until 2018. By then, the unequal trading partners were far from eye-to-eye.

The deterioration in the Sino-Australian relationship began in earnest back in 2017. At the time, Australian media blew the lid on a coordinated Chinese campaign to buy influence in the political establishment. The reporting led to the resignation of Australian Sen. Sam Dastyari. Australia also adopted its first rules against accepting political donations from overseas. Prime Minister Malcolm Turnbull said Australia had “stood up.” But the damage was done. Australia had already signed on with China in lucrative 100-year port loans and cheap trade deals. The dragon had what it wanted.

The friendship continued to sour in 2018 when the Australian government blocked China’s Huawei Technologies from bidding on contracts to develop Australia’s 5G network. The company was deemed a “national security threat.” In 2016, Australia had moved to block Chinese investment in Australia’s power supply for similar reasons. Officials have also expressed concern over a reliance on Chinese transformers to maintain the power grid.

China has perceived the moves as an effort to stoke “yellow peril,” a term coined in 19th-century America when Asian immigrants arrived to capitalize on the gold rush. But Australia’s fears are not based in xenophobia. The reality is that China wields a superior economic, political and military arsenal on Australia’s doorstep.

The final act that brought the thin facade of peaceful economic cooperation crashing to the ground came at the start of this year. Australia dared to spearhead an investigation into the origins of covid-19. Canberra had the gumption to call for Beijing to hold itself to account for the spread of the coronavirus.

The dove pecked at the dragon one too many times. Chinese retaliation began in earnest. The world’s most one-sided trade war began.

First, China discouraged students and tourists from traveling to Australia, a major blow to higher education and the tourism industry. China has supplied over 100,000 students in the past, and a horde of tourists descend from China every year.

Then came a rash of tariffs: barley, wheat and coal. A large number of meat processors were banned from sending meat to China. Then lobster, sugar, copper, cotton and timber were found by Chinese import officials to have “defects.” All were ordered back to Australia or were left to turn fetid on a Chinese runway. Bear in mind that each product represents multimillion-dollar or even billion-dollar industries.

Coal is another trade resource that has been targeted. While China looks to increase its import quota next year, it will not be from Australia. Australian coal has been unofficially banned since October. The Chinese say Australia has failed environmental standards.

Last week, wine was targeted. China concluded that Australian wine-makers had been dumping cheap wine on China since 2015. The result was anti-dumping duties ranging from 107.1 to 212.1 percent. This is an effective killing-blow to the industry’s exporting market. Treasury Wine Estates, for instance, was hit with a 169.3 percent tariff. It had to suspend trading on the share market as share plunged to just 13 percent. China is an $850 million market for wine exporters—taking 40 percent of Australia’s overseas shipments.

All these moves are a convenient sidestepping of the free-trade agreement signed between the two nations and a clear violation of World Trade Organization law.

And it isn’t over yet.

There is talk of iron ore being on Beijing’s hit list. Long considered a necessity for Chinese expansion, Australia’s iron ore could be on the way out. China is currently looking into alternatives in Africa and South America. Eighty percent of Australia’s iron ore currently goes to China. It has long been seen as Australia’s trump card—a way for Australia to punch back in the economic dispute. But China may find a suitable alternative or fall back on its vast stockpiles, making iron ore no longer Australia’s weapon, but China’s.

China buys more than a third of Australia’s exports, and that is why Australia cannot win the current trade war. That is the reason Australia fears Beijing. Australia needs China; China doesn’t need Australia.

China can source its goods elsewhere. Maybe at a lower quality or a higher price, but it is available. Australia, on the other hand, doesn’t have another China, its largest trading partner, a gigantic market. None of Australia’s allies are in any position to fill the void. The United States is crippled with internal division. Self-induced covid-related economic wounds make intervention from any Western nation an impossibility. A hodgepodge of nations in Southeast Asia—many of which are already beholden to China—couldn’t fill the void.

Australia is fighting a war it cannot win. In the midst of this lopsided battle, it continues to blunder. Victorian Premier Daniel Andrews has signed up to China’s Belt and Road Initiative, which is a debt trap for nations throughout Australasia and the South Pacific and a weapon for Chinese expansion. Andrews signed on despite the protests of the federal government.

The Bible calls this behavior that of a “silly dove.” God condemned the Israelite tribe of Ephraim for such policies. The descendants of these Ephraimites migrated north and west to the British Isles. Australia, a commonwealth nation of Great Britain, is actually made up of descendants from Ephraim. (Read our free book The United States and Britain in Prophecy, by Herbert W. Armstrong, for proof.)

“Ephraim allows himself to be mixed up with foreigners” (Hosea 7:8; Moffatt translation throughout). That word “mixed” in the Strong’s Concordance means “mix, mingle, confuse or confound.” Verse 9 says, “Foreigners eat away his strength, unknown to him.” Verse 11 sums up the modern descendants of Ephraim as “a silly, senseless dove.” Australia is fluttering around trying to find help from other nations, but there is no help. Why? Because it is looking to the wrong source.

Rather than trusting in other nations or in themselves, Australians should trust in God. If only Ephraim—and all the Western nations—would turn to the one who can actually solve their dilemmas. God isn’t just upset that He has been forgotten; He is enraged! God says He flings His net on this silly dove and will “bring them down like a bird, punishing them for their misdeeds. Woe betide them for forsaking me! Death to them for deserting me!” (verses 12-13). This is strong condemnation for the descendants of Israel today.

The Bible is full of prophecy concerning the days we live in right now. God talks of economic warfare as a “siege.” Throughout the Bible, modern nations are described as lions, bears, leopards and other violent beasts violently seeking greater power. In the midst of this, God calls Australia—and the British Commonwealth—doves. What hope do doves have in a time of beasts?

Our only hope is to turn back to the God who gave us this land. The “lucky country” didn’t prosper because of luck. All the blessings Australia has had were from God. It is time Australia woke up to its role in God’s plan.

To avoid the fate of a dove in this world of beasts, read The United States and Britain in Prophecy, by Herbert W. Armstrong.