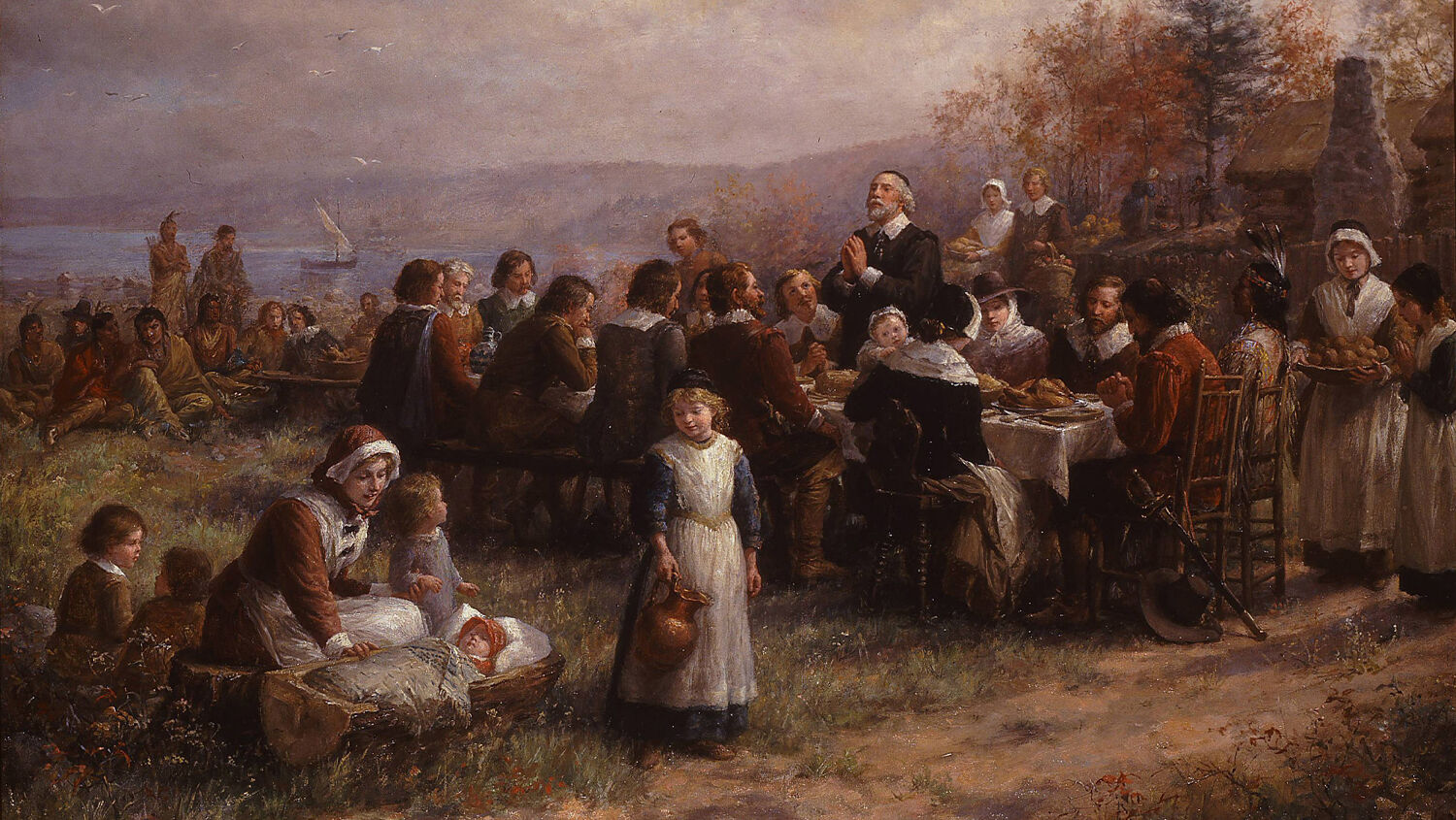 You probably have not heard the whole story of how the pilgrims came to appreciate God’s law.

This month is the 400th anniversary of the Pilgrims’ arrival in New England. The story of how the pilgrims fled religious persecution in England, established the Plymouth Colony in Massachusetts, and celebrated the first Thanksgiving is repeated annually in America. This story tells how 102 pilgrims arrived in Plymouth in the middle of winter. It tells how 45 of those pilgrims starved to death before spring. Then it tells how the pilgrims befriended the Native Americans Samoset and Squanto, learned to grow corn, and gave thanks to God for their blessings during a Thanksgiving feast that autumn.

If you have heard that story, you have not heard the whole truth.

The pilgrims gave thanks to God in a three-day Thanksgiving feast in 1621, but their harvest was not bountiful. They only grew a fraction of the food they needed to survive the coming winter, so the Wampanoag tribe provided much of the food they ate during the first Thanksgiving. Many pilgrims starved the following winter.

In his History of Plymouth Plantation, the governor of Plymouth Colony, William Bradford, wrote that many pilgrims became so desperate the following winter that they sold their clothes and bed coverings for food. Others became servants of the Wampanoag tribe, cutting their wood and fetching them water in return for a cap full of corn. Still, others stole from their fellow pilgrims and from the Wampanoag.

The pilgrims had to learn a lesson about the Bible before God blessed them with abundance.

Something most people do not know about the pilgrims is that they were communalists. The communalist movement was a form of socialism that taught that communities should pool their resources and share their production. Those more capable were to do what they could, and those less capable were to take what they needed. As the atheist Karl Marx later phrased this way of thinking, “From each according to their ability, to each according to their needs.”

It did not take Governor Bradford long to realize that something was seriously wrong. In his History of Plymouth Plantation, he wrote that the young men resented having to work for other men’s wives and children without any recompense. Meanwhile, the old men resented having to accept equal rations as those who had not served the community as long. And the women resented having to cook and clean for men who were not their husbands. The end result of all this resentment was that many refused to work and the food supply dwindled because “much was stolen both by night and day, before it became scarce eatable.”

After three years of scarcity, Governor Bradford rectified the situation by abolishing communalism. After discussing the matter with the leaders of the community, Bradford assigned every family a parcel of land and arranged for all the young boys to be assigned as members of some particular family. He then told each household that they could keep whatever they produced, or trade it away as they saw fit.

The change was startling!

Governor Bradford noted that “the women now went willingly into the fields, and took their little ones with them to plant corn, which before would allege weakness, and inability; whom to have compelled would have been thought great tyranny and oppression.” The pilgrims produced so much food during the summer of 1623, that there actually was great abundance during the Thanksgiving feast they celebrated that autumn. The next year, the pilgrims actually had a surplus of food they could sell to surrounding settlements.

Governor Bradford repented of his role in establishing Plymouth as a commune.

He wrote in his History of Plymouth Plantation, “The experience that was had in this common course and condition, tried sundry years, and that amongst godly and sober men, may well evince the vanity of that conceit of Plato’s and other ancients, applauded by some of later times—that the taking away of property, and bringing in community into a common wealth, would make them happy and flourishing; as if they were wiser than God. For this community (so far as it was) was found to breed much confusion and discontent, and retard much employment that would have been to their benefit and comfort.”

In other words, Bradford and the other pilgrim leaders had to repent of espousing the socialist ideas of the ancient Greek philosopher Plato above the laws of God. Plato rejected the concept of family and private property in his book Republic, but God considers the family unit to be the basic building block of the economy.

The Apostle Paul wrote that “if any provide not for his own, and specially for those of his own house, he hath denied the faith, and is worse than an infidel” (1 Timothy 5:8).

The pilgrims had to learn the hard way that a godly economy is built on a foundation of strong families that produce enough to take care of themselves and give to others. After they learned this important lesson, they were undoubtedly more thankful during the third Thanksgiving than they were during the first Thanksgiving. This is because they learned to be thankful for more than the food the Native Americans gave them; they learned to be thankful for the law of God that taught them how to build a prosperous society.

The British historian Paul Johnson wrote an article in the Sunday Telegraph titled “No Law Without Order, No Freedom Without Law” in 1999. In it, he wrote: “[B]oth in Virginia and in New England to the north, the colonists were determined, God-fearing men often in search of a religious toleration denied them at home, who brought their families and were anxious to farm and establish permanent settlements. They put political and religious freedom before riches …. Thus took shape the economic dynamo that eventually became the United States—an experiment designed to establish the rule of God on Earth ….”

But these colonists had to learn that establishing the rule of God on Earth means keeping the Ten Commandments—the basis of all righteous law. This is the true lesson of the first Thanksgiving; a lesson lost on most Americans today, who give little thought to why they have been blessed with such abundance. At a time when the rule of law in America is under constant attack, Americans need to relearn this hidden lesson of the first Thanksgiving.

Reading Bradford’s History of Plymouth Plantation is a great way to learn about the pilgrims’ experience. And reading Character in Crisis, by Trumpet editor in chief Gerald Flurry, puts the Founding Fathers’ quest to establish the rule of God on Earth in prophetic perspective.