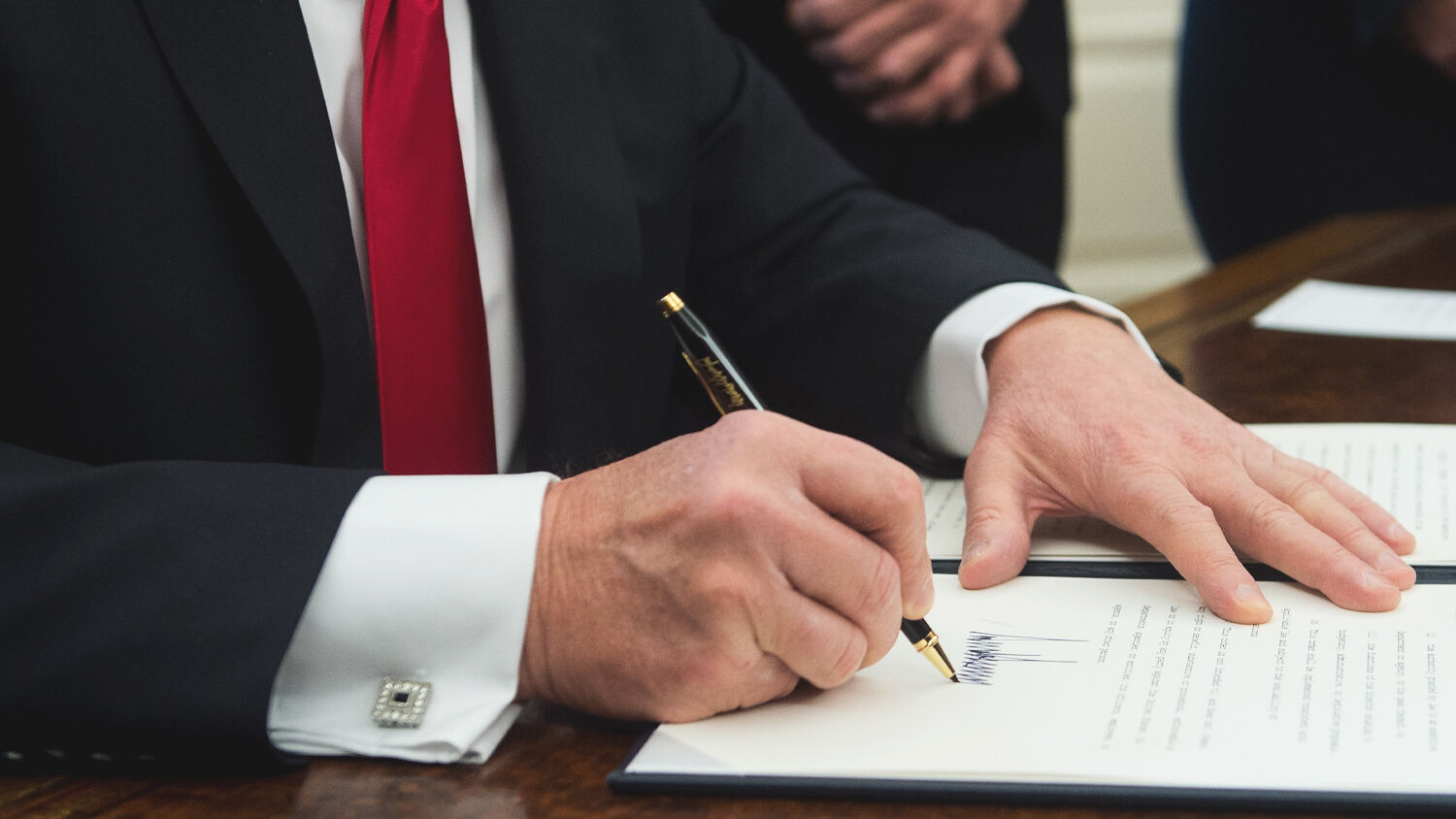 An overlooked executive order could be the undoing of the left.

The Trump administration and its lawyers continue to expose election fraud in swing states across America. As the vast trove of evidence piles up, commentators are considering the legal weaponry the Trump team might deploy next.

On Thursday, November 19, Sky News commentator Alan Jones highlighted one potential defense for the Trump administration. It comes in the form of an executive order signed over two years ago on Sept. 12, 2018. Order 13848 gives the Department of Justice broad prosecutorial powers against foreign actors meddling in U.S. elections.

This order seems tailor-made to defend the Trump administration.

At the time of the order’s signing, the left was focused on Russian collusion. President Donald Trump was also concerned about foreign intervention. But he was not looking back to the 2016 election; he was looking ahead to 2020. In the order, the president found “that the ability of persons located, in whole or in substantial part, outside the United States to interfere in or undermine public confidence in United States elections, including through the unauthorized accessing of election and campaign infrastructure or the covert distribution of propaganda and disinformation, constitutes an unusual and extraordinary threat to the national security and foreign policy of the United States.”

The order continues, “In recent years, the proliferation of digital devices and Internet-based communications has created significant vulnerabilities …. I hereby declare a national emergency to deal with this threat.”

This document was signed under a state of national emergency that exists to this day. Strong language. At the time, many Democrats rejected it as too little, too late. They criticized it for focusing too exclusively on ballot-counting machines and software—the exact problem we see crippling America’s election process right now.

It is worth noting that Section 1 is focused almost exclusively on disruptions to “election infrastructure,” which the order later defines somewhat narrowly: “[T]he term ‘election infrastructure’ means information and communications technology and systems used by or on behalf of the federal government or a state or local government in managing the election process, including voter registration databases, voting machines, voting tabulation equipment, and equipment for the secure transmission of election results.”

The president warned that foreign powers could exploit the use of voting machines and tabulation equipment.

A Weapon Against the Left

Dominion Voting Systems, Smartmatic and Scytl are all companies with foreign ties that were used in these elections, and there are reports that other companies from Germany and Serbia were also involved. All of these would then fall under the scope of Executive Order 13848.

What does that allow the Trump administration to do? It allows, among other things, the seizure of property within the United States, restrictions on access to financial institutions, and “any other measures authorized by law.”

And who could be targeted? Any companies or persons that have “directly or indirectly engaged in, sponsored, concealed, or otherwise been complicit in foreign interference in a United States election.” Could that include companies and members of the mainstream media and big tech? “The Trump executive order about rigging elections … means clearly that the net can be cast very wide,” radio commentator Alan Jones stated. “It will be a brave person who is prepared to bet, even now, against Donald Trump.”

We have witnessed a coordinated attempt to steal an election. And it is, in large part, coming from within the United States. Yes, the ballot counting machines and hardware are foreign-owned, but it was the radical left and its media cabal that worked to rig the election.

This order allows the Justice Department to go after foreign interference aided by complicit cooperation on U.S. soil. All that remains is for the evidence to come out. As U.S. attorney Sidney Powell stated, “This is a massive election fraud, and I am very concerned that it involved not only Dominion and its Smartmatic software, but that the software was used by other election machines also. It’s the software that was the problem. Even their own manual explains how votes can be wiped away.” As ballots are recounted, machines will be scrutinized. Affidavits will be signed and read in court. The truth will keep coming out.

We can know for a fact that we are going to see the Trump administration come out victorious over the mainstream media and the radical left. Not because we trust the legal prowess of Mr. Trump’s lawyers—not because of Mr. Trump’s foresight in signing executive orders for these occasions—but because of the sure word of Bible prophecy.

Throughout the Trump administration’s first four years, Trumpet editor in chief Gerald Flurry pointed to scriptures that show the Trump presidency will be America’s last.

When the situation looked bleak for ancient Israel, “the Lord gave Israel a saviour” (2 Kings 13:5). The book of Kings is one of the former prophets, and most of its prophecy is for the end time.

“For the Lord saw the affliction of Israel, that it was very bitter: for there was not any shut up, nor any left, nor any helper for Israel. And the Lord said not that he would blot out the name of Israel from under heaven: but he saved them by the hand of Jeroboam the son of Joash” (2 Kings 14:26). This is a prophecy about America today, the descendants of ancient Israel (read The United States and Britain in Prophecy, by Herbert W. Armstrong, for proof of America’s identity). God prophesied that an end-time type of Jeroboam ii would save America temporarily. In “Saving America From the Radical Left—Temporarily,” Mr. Flurry identified Mr. Trump as an end-time type of Jeroboam ii.

Under the Obama administration, the name of Israel was almost blotted out. Had Hillary Clinton been elected in 2016, it surely would have been.

In a recent article, Mr. Flurry boldly proclaimed that we can be sure Mr. Trump will win this election because many of the prophecies about what he will do have yet to be fulfilled. Scripture indicates that before his time in office ends, this modern Jeroboam ii will have control of religion and the highest court and federal agencies in America (Amos 7:13). (Read “Can President Trump Get Control of His Own Divided Government?” for specific details of this prophecy.) This is happening in America today: President Trump has a strong evangelical following and, with his appointment of Justice Amy Coney Barrett, the Supreme Court is now more conservative than it has been in years.

The radical left thinks the fraudulent results of this election are set in stone. But God has other plans. His promises will not be undone by the will of Big Tech or the mainstream media. Despite the best efforts to blot out the name of Israel, God’s plan will be carried out. Israel will be saved for one final moment.

As Mr. Flurry wrote in a recent letter to members and co-workers, “I don’t know exactly how this will play out, but I believe God is allowing it to happen this way to ensure that the evil and corruption in America are exposed!”

Whether or not Executive Order 13848 is weaponized against the left-wing media, politicians and Big Tech, keep watching. The Trump administration is about to have a resounding miraculous victory over the radical left.

Mr. Flurry’s free booklet Great Again is a must-read in these times of political turmoil. Be sure to request a copy if you have not done so already.