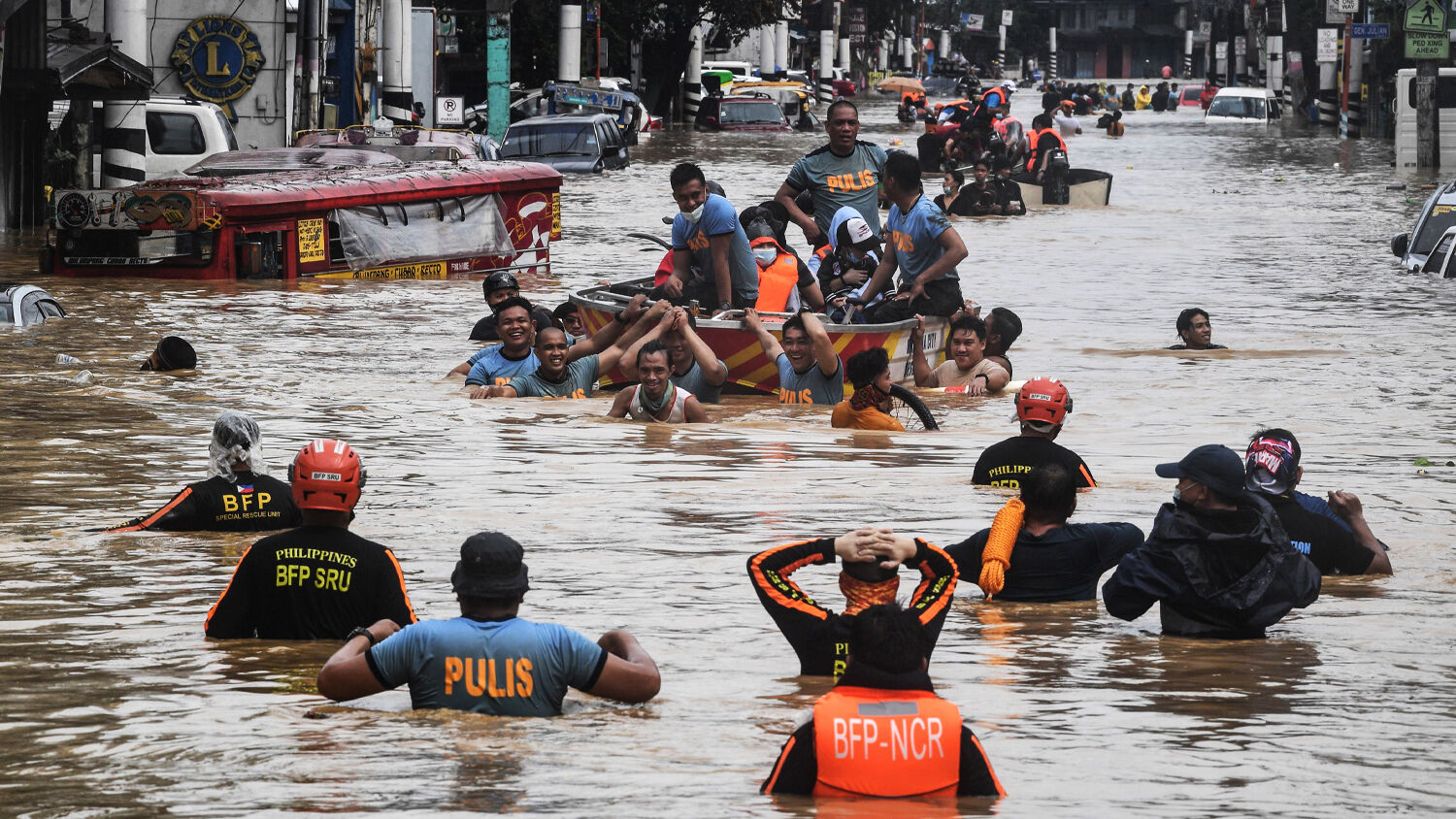 Typhoons have been hammering the Western Pacific for several weeks now. The Philippines and Vietnam were especially hard-hit. While the region is no stranger to typhoons, the size and frequency of the latest storms make them especially disastrous.

First was Typhoon Molave (also known as Typhoon Quinta), which made landfall in the Philippines on October 25 and continued to plow through the country the next day. It displaced tens of thousands of people, with 27 confirmed fatalities. It caused an estimated $55 million in damage to agriculture, as well as $32 million in damage to infrastructure.

After the storm crossed the South China Sea, it hit Vietnam much harder. Molave killed at least 40 (some estimates are higher) and caused roughly $430 million worth of damage. Just before the typhoon hit, the Vietnamese government evacuated over a million people. The effects of the typhoon were compounded by the fact that the nation was experiencing weeks of severe flooding. Crop damage left an estimated 150,000 people in immediate need of food. Additionally, the storm caused many deadly landslides.

President of the Vietnam Red Cross Society Nguyen Thi Xuan Thu said in a press release: “[The] people of Vietnam are tough, yet this is among the worst destruction ever seen in many areas. The relentless storms and flooding are taking a devastating toll, further destroying livelihoods and isolating millions of people.”

Then came a super typhoon.

Super Typhoon Goni (also known as Super Typhoon Rolly) was the most powerful storm so far in 2020, with winds reaching about 180 miles per hour. The storm’s eye made landfall in the Philippines on October 31. It affected 32 out of the Philippines’ 81 provinces. Luzon, the country’s most populous island, was especially hard-hit.

We are horrified by the devastation caused by this typhoon in many areas, including Catanduanes island and Albay [province]. Up to 90 percent of homes have been badly damaged or destroyed in some areas. This typhoon has smashed into people’s lives and livelihoods on top of the relentless physical, emotional and economic toll of covid-19.

According to the Philippine government, infrastructure damage cost is roughly $266 million, while the estimated losses in agriculture amount to roughly $103 million. Around 240,000 people were left homeless.

The Philippines has the second-highest levels of covid-19 cases in Southeast Asia. Because of the government’s response to the pandemic, the Philippines has little disaster funds left for the damage caused by the typhoon.

Known as Typhoon Ulysses in the Philippines, it followed roughly the same path as Super Typhoon Goni. It hit the Philippine capital of Manila on November 11, causing the worst flooding the city has seen in over 10 years, according to the Telegraph. Vamco left some 3 million homes without power. Many Manila residents were stranded on their rooftops as the water level reached the height of electrical poles. Some 40,000 houses in the suburb of Marikina are flooded completely or partially. Aerial shots of Manila’s streets are reminiscent of Venetian canals.

Vamco hit the Cagayan River Valley especially hard. It force authorities to open up the Magat Dam, which, according to Al Jazeera, “released water … equivalent to two Olympic-size pools per second.” Richard Gordon said that the floods, reaching nearly 40 feet high, “are a calamity and the worst we have seen for at least 40 years.”

The Philippines recorded at least 53 official casualties from Vamco

Juanita Arimbuyotan, a widow from Dipaculao, Aurora province, said: “We still have no electricity [after a week] … farms here became wide lakes and the highway beside the sea in our town was covered with stones and debris from the huge waves.”

Typhoon Vamco later hit Vietnam. “There has been no respite for more than 8 million people living in central Vietnam,” said Nguyen Thi Xuan Thu. “Each time they start rebuilding their lives and livelihoods, they are pummeled by yet another storm. This is heartbreaking for even the most resilient communities. Our greatest concerns are for the elderly and poor, as well as some 400,000 families whose homes have been destroyed or damaged and who now face this latest storm while living in temporary shelters or crowded in with relatives.”

Philippine President Rodrigo Duterte stated that the typhoons were “a stark reminder of the urgency of collective action to combat the effects of climate change.” Christopher Rassi, the acting leader of the Red Cross’ Country Cluster Delegation in Bangkok said that “these relentless storms are yet another example of the devastating impact of climate change.” But is the cause really man-made climate change?

People often blame God for weather disasters. In the aftermath of the 2004 tsunami that struck Asia, the Sunday Telegraph paraphrased Archbishop of Canterbury Rowan Williams, saying, “The Asian tsunami disaster should make all Christians question the existence of God.”

But what does the Bible say about God’s hand in weather? After all, if one of God’s names is “the God of heaven” (Jonah 1:9), then shouldn’t the Bible have something to say about our weather disasters?

Notice what we write in our free booklet Why ‘Natural’ Disasters?:

This view about “climate change” has taken hold of millions of minds around the world. It is often presented as if it is irrefutable scientific fact. The truth, though, is that it is an ideology, and it will negatively affect every single person who falls for it!

This is not a political view. We aim to give you God’s view. Our great Creator knows that climate change is not the cause of weather disasters! …

The book of Nahum is a book of prophecy for this end time. The prophet begins by drawing attention to the command God has over disastrous weather. “The Lord is slow to anger, and great in power, and will not at all acquit the wicked: the Lord hath his way in the whirlwind and in the storm, and the clouds are the dust of his feet” (Nahum 1:3). In today’s language, this is speaking of hurricanes and tornadoes. This says God sends storms—and these storms result in flooding and destruction. He controls where and how hard the storms strike.

“He rebuketh the sea, and maketh it dry, and drieth up all the rivers: Bashan languisheth, and Carmel, and the flower of Lebanon languisheth” (verse 4). Anciently, Bashan, Carmel and Lebanon possessed some of the most fertile farmland in the world. But God dried the rivers with droughts, and the abundance of those regions just withered away.

The idea that carbon emissions cause storms is the antithesis of what God says!

The Bible shows that God is ultimately in control of Earth’s weather systems. Think of this: God sent a worldwide flood as a curse in Noah’s day (Genesis 6-8). He stirred up a sea storm to rebuke Jonah for his sin (Jonah 1:3-4). Jesus Christ calmed a tempest on the Sea of Galilee with His word, and His disciples were amazed that “even the winds and the sea obey him!” (Matthew 8:23-27). Wouldn’t God then have at least something to do with our modern weather crises? But why does He allow them? Why doesn’t He stop them? Our booklet states:

When such calamities strike, God expects us to seek Him. This means prayer, but also much more. Read verses 8-11 [of Amos 4]. These verses foretell of intensifying curses, and state four times: “… yet have ye not returned unto me, saith the Lord.” God keeps repeating this crucial point!

God causes these conditions as punishment for pushing Him out of our lives. He is trying to get people to return to Him! This prophecy should help us see the connection between extreme weather upsets and human sin. Certainly we must pray—but we must also return to God! Returning to God requires real, tangible action.

Job 37:11-13 say that God brings rain on the Earth, “whether for correction, or for his land, or for mercy.” Yes, God corrects. He corrects people for breaking His law—a law that revolves around loving God and loving our fellow man (Matthew 22:35-40; Romans 13:8-10). And God’s correction is a sign that He loves you (Hebrews 12:5-6). It means that He is trying to reach out to you. It means that he is concerned for your well-being.

There is a modern example of God correcting a nation and then answering the nation’s prayers. In 2007, Australia was in a drought for the 10th year in a row. Prime Minister John Howard publicly called for Australians everywhere to pray for rain. The national prayer he called for was answered within a week. Rain came. Mr. Howard asked for the people to keep praying. With that, the rains kept coming.

But that was over 10 years ago. Since then, unprecedented weather disasters have rocked every corner of the globe. We have faced everything from typhoons to earthquakes to firestorms to plagues of locusts. And the disasters keep breaking records.

God is trying to tell us something.

For more information and to understand how you can be protected from greater disasters to come (and they will come), please read our free booklet Why ‘Natural’ Disasters?