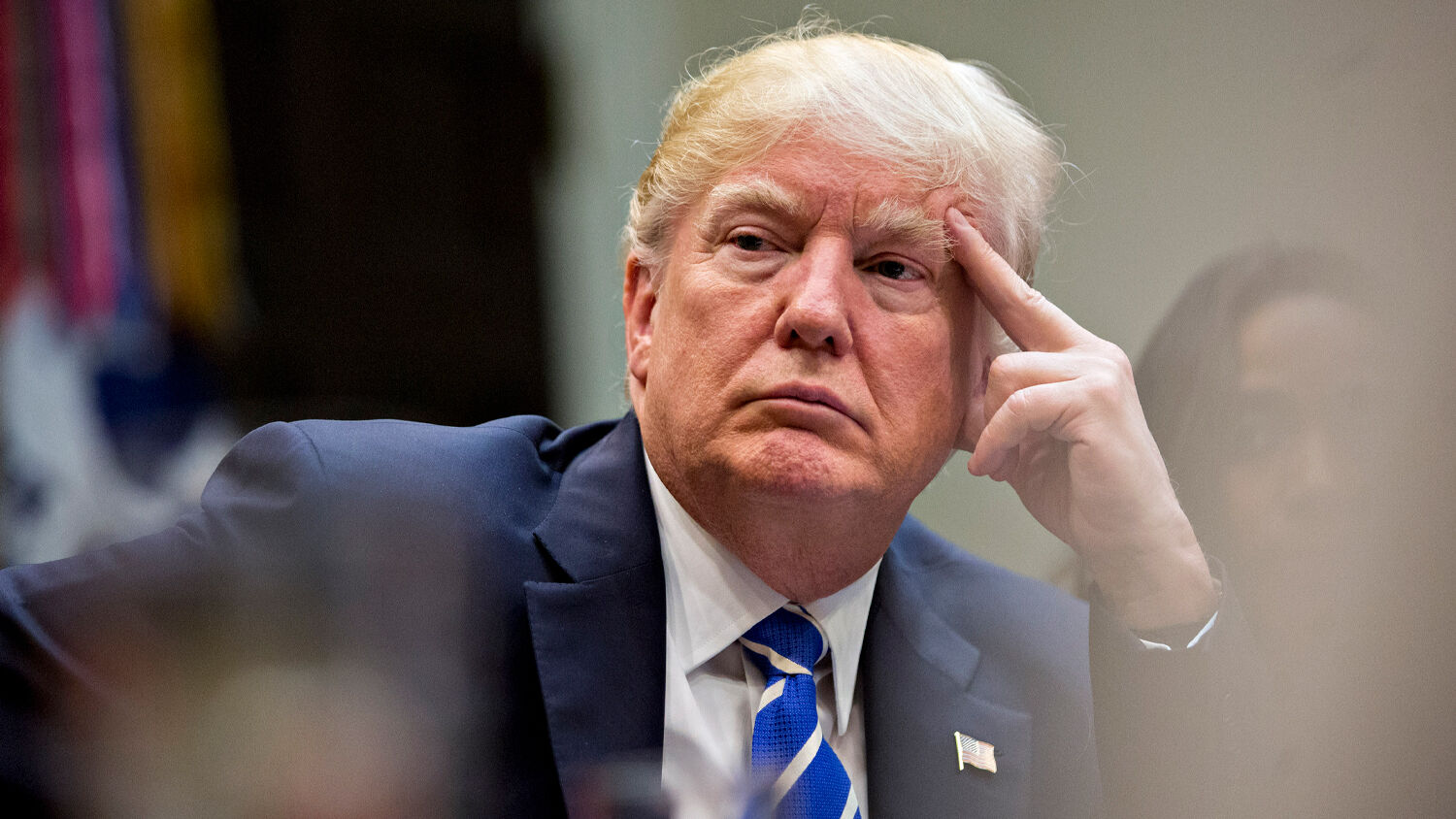 U.S. President Donald Trump listens while in a meeting in the Roosevelt Room of the White House.
Andrew Harrer-Pool/Getty Images

God works in mysterious ways, the saying goes. His thoughts are far higher than ours (Isaiah 55:8-9), and we don’t know all His reasons and purposes. Yet, “It is the glory of God to conceal a thing: but the honour of kings is to search out a matter” (Proverbs 25:2).

To try to understand what God is doing and why is an honorable pursuit. And to search out what He is doing in America’s election is fascinating.

The Trumpet’s editor in chief, Gerald Flurry, made a bold forecast just hours after the media declared Joe Biden the winner. He summarized it in his Trumpet Brief from last week: “Donald Trump Is Going to Win This Election.” He wrote, “It does appear strongly that this man will be America’s next president. But I absolutely do not believe that at all. Regardless of how things look right now, I am confident that Donald Trump will remain president.”

Why? Because of biblical prophecy. Mr. Flurry has written extensively on how the leader of the United States, and Donald Trump specifically, will fulfill certain prophecies. Some of these are yet unfulfilled—but we can be confident they will be.

So, as Mr. Flurry wrote, “This means this nation is about to be shocked”! The election result that so many are celebrating will be overturned.

What does this portend for America? What will be the results of Donald Trump remaining president? Why would God allow events to unfold this way?

Because of the way this is playing out, Democrats and other leftists are convinced Donald Trump is finished. They dismiss his efforts to investigate election fraud as doomed acts of desperation. They are sanctimoniously celebrating how Barack Obama’s vice president will restore America’s honor and character and dignity.

This is a worst-case scenario for America’s unity and social cohesion.

Had President Trump’s victory been announced on Election Day, leftists would have been outraged. They would have claimed election fraud and Russian interference and who knows what else. We would have seen street riots and burning cities. It would have been bad.

But what will happen after massive, brazen fraud is exposed and President Trump wins well after Election Day? And why would God allow this to happen this way?

Mr. Flurry wrote in that Trumpet Brief, “I don’t know exactly how this will play out, but I believe God is allowing it to happen this way to ensure that the evil and corruption in America are exposed!”

God’s purpose is to expose the truth. The aftermath of this election has already exposed the bullying, double standards and hypocrisy of politicians, media, tech companies and more—none of which would have emerged so forcibly had things unfolded differently. But all that wrongdoing is going to pale in comparison to the evil we are about to see when the victor is finally declared.

This is a huge trap, and leftists are walking straight into it. No matter the facts regarding fraud and corruption, and even if it is done according to constitutional law down to the jot and tittle, they will claim it’s actually Trump who is subverting democracy and nakedly grabbing power. They will be aghast, horrified, angered, enraged. They will reach hitherto unprecedented heights of fury, hysteria and anarchy. Naturally, the left will blame Trump. They will feel altogether justified in burning cities to ash and overthrowing the land. But it will be nothing but an infantile temper tantrum by people with no self-restraint and no regard for law, truth or freedom.

This lawlessness will expose America’s sin. It will show how much we have allowed Satan to infiltrate and influence us, and how far from God we really are!

God will use it to punish this nation, and it will make us vulnerable to collapse. In fact, prophecy says it will lead ultimately to foreign attack and conquest!

What else can we “search out” in what God is doing?

One reason Mr. Flurry forecasts that Donald Trump will prevail in this election is that he knows the president is a modern-day type of the ancient kings Jeroboam i and Jeroboam ii of Israel. In his cover story for the upcoming Trumpet, Mr. Flurry wrote that King Jeroboam i did not believe God and feared he would lose his kingdom if people returned to Jerusalem and the dynasty of King David; thus, he devised a new religious system that kept the people reliant on him. This false system endured for centuries until Israel fell.

“This same sin is being committed today!” Mr. Flurry wrote. “There is a powerful religious dimension to Donald Trump’s presidency. In many respects, his presidency is underpinned by support from religious leaders and people—but the religion of Jeroboam is false religion!”

Amos 7 refers to Jeroboam and the “king’s chapel,” a symbol for Mr. Trump’s powerful religious following. The president is causing religious people to look to him and to trust in a man—which Jeremiah 17:5 says leads to curses! God wants us to trust in Him, not a man.

Many evangelicals and other religious Americans supported Donald Trump in 2016 and have prayed for him ever since. They have watched him survive four years of onslaught from the media, Big Tech, Democrats and even spies and others in his own branch of government. Many are now praying for him to triumph in this contested election.

When this man wins a second term, these people will surely be convinced God endorses the faith they are placing in President Trump. As a direct result of the way this election is unfolding, the relationship between the president and the “king’s chapel” is certain to grow even stronger.

These events will prove to be a trap not only for the left, but also for the president’s religious followers.

Mr. Flurry has shown that President Trump is also a type of King Jeroboam ii, who led a resurgence in Israel. But like his predecessors all the way back to Jeroboam i, that king did not turn people to God, and therefore that resurgence was only temporary. So will be the Trump resurgence. It’s not a sign of God’s approval—it’s one last opportunity to repent before the house of cards falls. The trust people are vesting in a sinful man will be exposed as misplaced and illusory.

I see yet one more reason God is working out the election this way: to spotlight His prophecies—and the modern prophet He is using to reveal these prophecies.

“Donald Trump Is Going to Win This Election” is a bold headline. It isn’t based on vote counts, lawsuits or analysts, but on Bible prophecy. Mr. Flurry has made similar pronouncements from the beginning of the Trumpet over 30 years ago. This one is particularly dramatic because of its specificity and how blatantly it contradicts what you’re hearing just about everywhere else.

Yet this has happened before. You can read about the prophecy Mr. Flurry made that this organization would win the legal rights to publish the truth God established through Herbert W. Armstrong (including numerous prophecies). He did so at a time when the courts had ruled against us and almost all legal options had been blocked. Yet we won full copyrights, and we’ve been publishing that material ever since.

We expect a similar outcome here. God’s people and the world will see that when God’s true servant steps out in faith and makes a bold forecast based on Bible prophecy, we can follow that faith.

“We must see [God] at work in what is happening here,” Mr. Flurry wrote in his Trumpet Brief. “He is going to use these events to expose the evil and corruption in America. And He will ensure that every one of His prophecies is fulfilled. Just watch!

“These events are going to shock a nation that has already turned the page on our current president. But they should not shock you. Watch what happens, and when this comes to pass you will be able to recognize God’s guiding hand!”