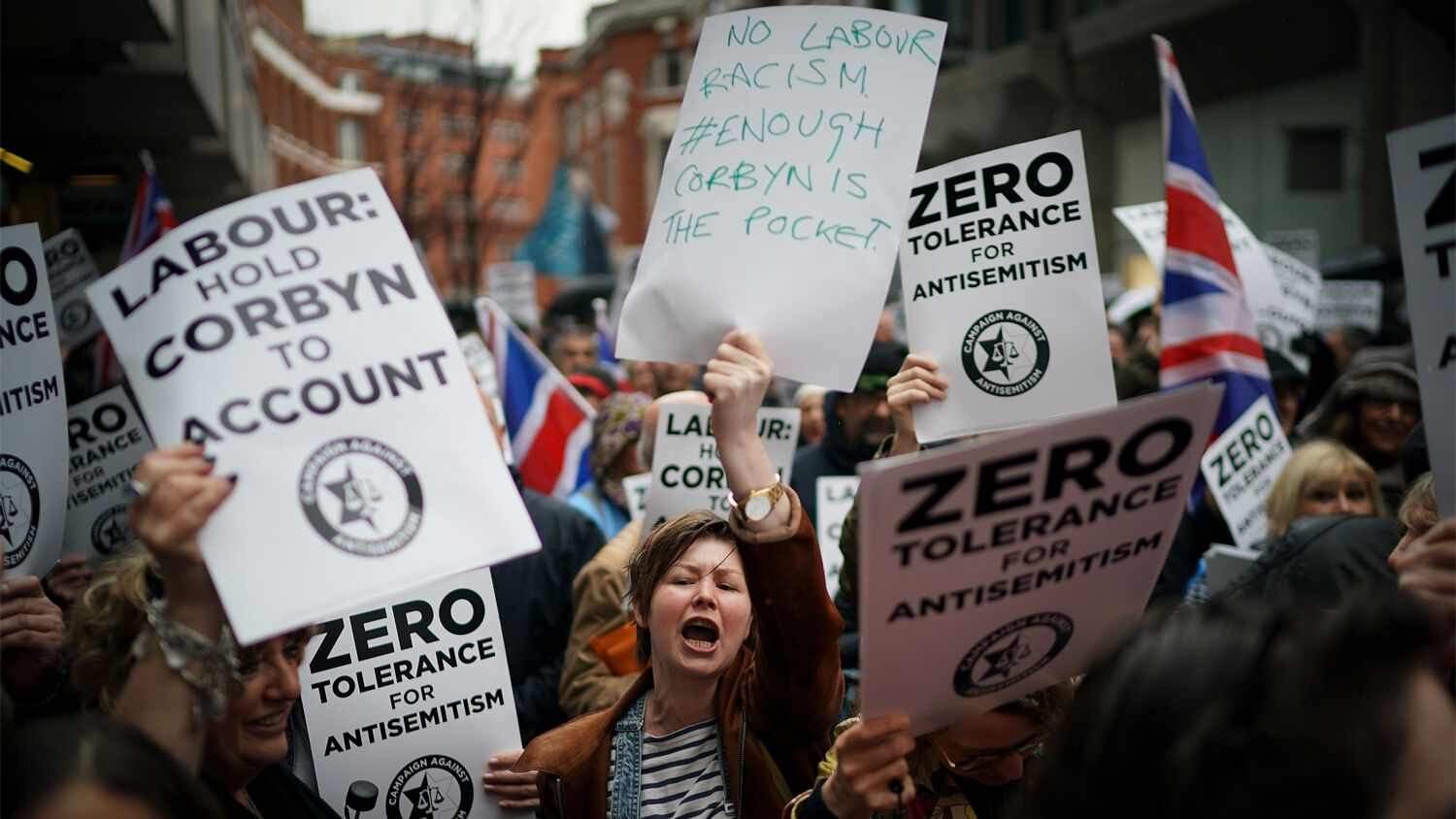 Campaigners from the Campaign Against Anti-Semitism demonstrate and listen to speakers outside the Labour Party headquarters in 2018.
Christopher Furlong/Getty Images

But does the report go far enough?

The United Kingdom’s Equality and Human Rights Commission (ehrc) released a report on anti-Semitism in the Labour Party on October 29. The ehrc studied 70 complaints out of roughly 220 they were able to identify.

Their findings are not impressive. The executive summary of the report states: “Our analysis points to a culture within the party which, at best, did not do enough to prevent anti-Semitism and, at worst, could be seen to accept it.” That statement would be condemning enough, but it is amplified with the paragraph that follows (emphasis added throughout):

The issue of anti-Semitism within the Labour Party has been the subject of much scrutiny, most formally with three investigations in 2016 …. Since then, the party has failed to implement the recommendations made in these reports fully, or to take effective measures to stop anti-Semitic conduct from taking place. It is regrettable that many of the concerns we raise here were first raised in these reports over four years ago.

Just what concerns does the report refer to?

A few individual cases of harassment were brought up. For example, Labour Member of Parliament Naz Shah stated in 2016 that to solve the problems in the Middle East, the State of Israel had to be relocated to the United States. Former Labour Mayor of London Ken Livingstone defended her comments on an interview with bbc Radio, even after Shah herself had apologized. During the interview, Livingstone made the comment that “Hitler … was supporting Zionism.” Livingstone has since been suspended from the party.

Also in 2016, a suspended party member was reinstated despite having a history of supporting Holocaust denial online.

Most of the report’s findings focused on derogatory remarks on social media (coupled with the failure of the Labour Party to censor such posts) as well as the party failing to have a proper system in place to investigate allegations of anti-Semitism.

Labour leader Sir Keir Starmer called the day of the report’s release “a day of shame for the Labour Party.”

Former Labour leader Jeremy Corbyn, under whose leadership many of these allegations surfaced, stated that the report was exaggerated. (Corbyn was subsequently suspended from the party.)

Contrary to what he might claim, however, the report actually doesn’t go far enough—especially with regard to Corbyn himself and his reputation of anti-Semitism. The report contains nothing about Corbyn’s strong association with anti-Semitic organizations.

And when I say “anti-Semitic organizations,” I mean militant terror cells like Hamas and Hezbollah.

In a 2009 meeting, Corbyn publicly called Hamas and Hezbollah his friends. Mind you, these are terrorist organizations based in the Gaza Strip and Lebanon, respectively, each with the goal of waging perpetual warfare against Israel. Hamas is recognized by the United States, European Union, Japan, Canada and other nations as a terrorist entity, while the United Kingdom partially recognizes it as such. Hezbollah is recognized as a terrorist organization in the UK.

Corbyn has since backtracked on the comments, but the record shows him holding meetings with Hamas leadership frequently. In 2014, he attended a ceremony in Tunisia where he was present for a wreath-laying at a memorial for the Palestinian Black September terrorists who orchestrated the murder of Israeli athletes at the 1972 Munich Olympics. In 2019, in response to Corbyn showing support during a pro-Palestinian rally in London, Hamas officially praised him with “great respect and appreciation” for his actions.

Corbyn is also a big supporter of the governments of Cuba and Venezuela, which do not recognize Israel’s legitimacy as a country.

And to think, this is the man who could have become prime minister of the United Kingdom just a few years ago. Labour Party officials have even stated that Corbyn might have a way back into the party.

Critics may claim that there is a difference between anti-Semitism and anti-Zionism. Criticizing the policies of the Israeli government and being an anti-Semite are not necessarily the same thing, after all. But regularly associating with groups like Hamas that not only call for the destruction of a nation in its entirety (not to mention having a history of Holocaust denial) is associating with supporters of genocide.

And besides, Israel is the Jewish state. It is a state for Jews run by Jews, and much of the criticism leveled at Israel aims precisely at this fact. Anti-Semitism shouldn’t be considered a crime only when directed against the Jewish diaspora but justified when it is leveled against Israelis. Israelis are Jews, too. Many seem to have an easy time forgetting that.

Whether people like to admit it or not, the core of the problem with anti-Semitism and anti-Zionism is that the Jews are the people of God. Psalm 78:68 says that God “chose the tribe of Judah.” Romans 3:1-2 say that unto the Jews “were committed the oracles [the sacred writings] of God.”

The same Bible also says that “the carnal mind is enmity [hostile] against God: for it is not subject to the law of God, neither indeed can be” (Romans 8:7). This natural hostility to God and everything that God does branches out to those God has associated Himself with, like the Jews. People don’t condemn other countries for their national policies like they do with Israel’s strategies for dealing with the Palestinian problems. People around the world don’t call for the destruction of national existence for countries like they do Israel.

But there is a bigger issue at play here. It isn’t just a problem with man that is the root cause of anti-Semitism.

It may be easy to label anti-Semitism as a problem our society deals with similar to other issues of discrimination and persecution. But it isn’t. The Jews—both in and out of the Holy Land—have been persecuted for over 2,000 years. Whether it was the Greeks under the mad king Antiochus iv Epiphanes, the Roman emperors, the Inquisition, the czars, the Nazis, the Communists or the Arabs, the Jewish people have dealt with tremendous persecution for almost the entirety of their existence.

It’s as if some invisible, omnipresent force has, throughout history, surcharged the air with a natural hostility to them.

Anti-Semitism is not a new societal problem, but it has lately taken on an increasingly virulent form around the world. This is a harbinger of terrifying times to come for the Jews and even the whole world—a lot worse than many realize. To learn more, please read our article “The One Minority Society Loves to Hate.”