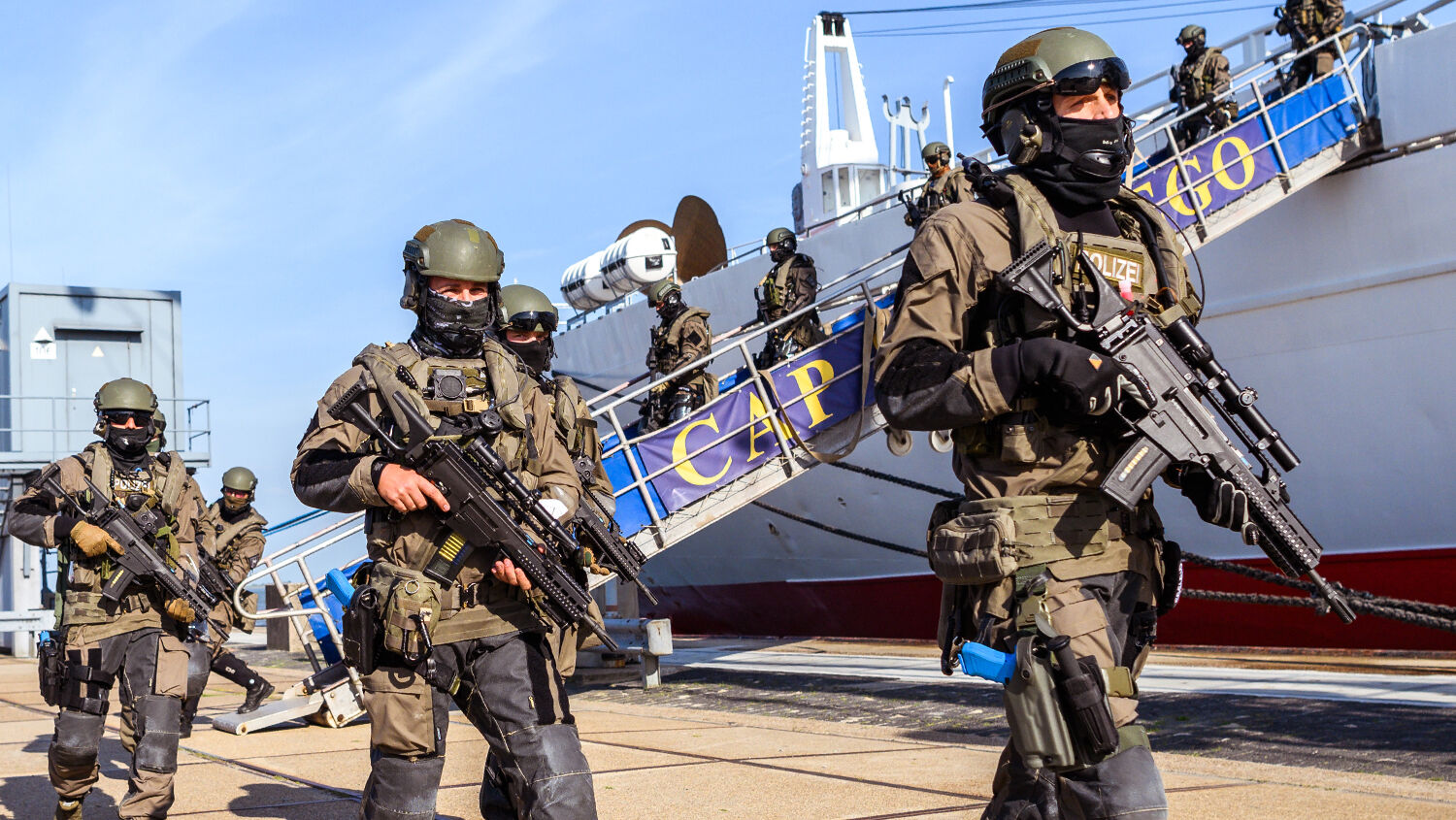 sek forces leave the ship Cap San Diego after it arrives at the port of Wilhelmshaven naval base.
Mohssen Assanimoghaddam/picture alliance via Getty Images

Should Australia trust Germany for protection?

Germany will deploy Navy officers with the Australian Navy and will send a frigate to patrol the Indo-Pacific region, Defense Minister Annegret Kramp-Karrenbauer announced on November 5. Germany is becoming more involved in the Indo-Pacific to manage China’s influence in the region.

But should Australia trust Germany for its protection?

“We believe that Germany needs to mark its position in the region,” Kramp-Karrenbauer stated. “China is an important trading partner for Germany and we have strong economic ties which are in the interest of both sides. At the same time, we do not turn a blind eye on unequal investment conditions, aggressive appropriation of intellectual property, state-subsidized distortion of competition, or attempts to exert influence by means of loans and investments.”

The German Navy wants to use its planned collaboration with the Australian Navy to further test the German Navy’s capabilities in the Indo-Pacific region, as well as increase its influence in the region. Defence Connect wrote:

The planned Hamburg deployment [of a German frigate] comes as Germany’s defense leaders test the waters for new engagements far from home. The sea service especially is seen by some as a potential harbinger for the type of out-of-area missions that the homeland defence-focused German military wants to expand to underwrite its geopolitical ambitions.

In trusting Germany for protection, Australia would do well to seriously consider the nation’s track record when it comes to “geopolitical ambitions”—after all, it started World Wars i and ii.

Germany isn’t the only European nation Australia is placing more trust in. During a 2018 visit to Australia, French President Emmanuel Macron announced that he wanted France and Australia to become the “heart” of a new “Indo-Pacific axis.” He wanted to make a “strong Indo-Pacific axis to build on our economic interests as well as our security interests,” he said. “I would very much like France, given it is the last European member of the EU being present in the Pacific … to be at the heart of this project. This region is crucial for the stability of the world.”

Since Macron’s 2018 announcement, France has enacted its own Indo-Pacific military strategy. This has led to Australia starting the process of acquiring 12 attack submarines from France. But concerns about this deal are growing. The price for the project has increased from approximately $35 billion to $58 billion. Some are concerned the fleet would be obsolete by the time it is constructed. Prominent voices, including three American generals, are recommending the Australian government leave the project.

But France’s navy chief, Adm. Christoph Prazuck, told the Australian Financial Review last year that he would like to see French and Australian naval vessels conducting patrols together. According to Admiral Prazuck, French naval vessels visit Australia’s ports more than any other foreign navy, with about 12 arrivals a year.

Can France be trusted to protect Australia?

France’s economy is reliant on Germany’s, its largest trading partner. Germany’s close trade alliance with China means Paris does not want to upset Beijing. During Mr. Macron’s 2018 visit to Australia, he said: “I think the Chinese rise is very good news for everybody because it’s good for China itself.”

The late Herbert W. Armstrong, founder of the Plain Truth magazine (predecessor to the Trumpet), long warned that Germany and France would lead a united Europe that will betray America and the British Commonwealth (including Australia). Mr. Armstrong based his prediction on Bible prophecy, specifically Revelation 13 and 17, which discusses a European superpower made up of 10 “kings,” or authoritarian leaders.

A prophecy in Isaiah 23 shows that this European superpower will be allied with certain Asian powers, including China, for a short time. Verse 3 describes this huge, short-lived trade alliance as a “mart of nations.” (For more information, read out article “The Great ‘Mart of Nations.’”)

This behemoth trade alliance will not include the U.S. or the British Commonwealth—the modern descendants of ancient Israel (to learn more about the modern-day identities of Israel, request our free book The United States and Britain in Prophecy, by Mr. Armstrong). Deuteronomy 28 outlines God’s covenant with the people of Israel. This chapter discusses blessings for obedience and curses for disobedience. God warns that He will punish the nations of Israel today for their sins (verse 15). This punishment will include the nations of Israel being besieged by foreign adversaries (verse 52).

The Bible contains many prophecies of that European power attacking America—and many other prophecies of America being besieged. …

In fact, considering that China has come to possess most of the world’s strategic sea gates (which, ironically, at one time were held by Britain and America), we believe there may be a brief alliance between the German-led Holy Roman Empire and certain Asian powers (Russia, China, Japan—the kings of the east). Should Europe, the resurrected Holy Roman Empire, find a way to take advantage—even for a moment—of key resources and strategic holdings of China, Russia and Japan, it would have more than enough power to besiege the Anglo-Saxon nations and enslave them.

Europe will soon betray the U.S. and British Commonwealth. We need to be watching as these events unfold. To learn more about the soon-coming double-cross by Germany and France and what it means for Australia, request our free book The Holy Roman Empire in Prophecy.