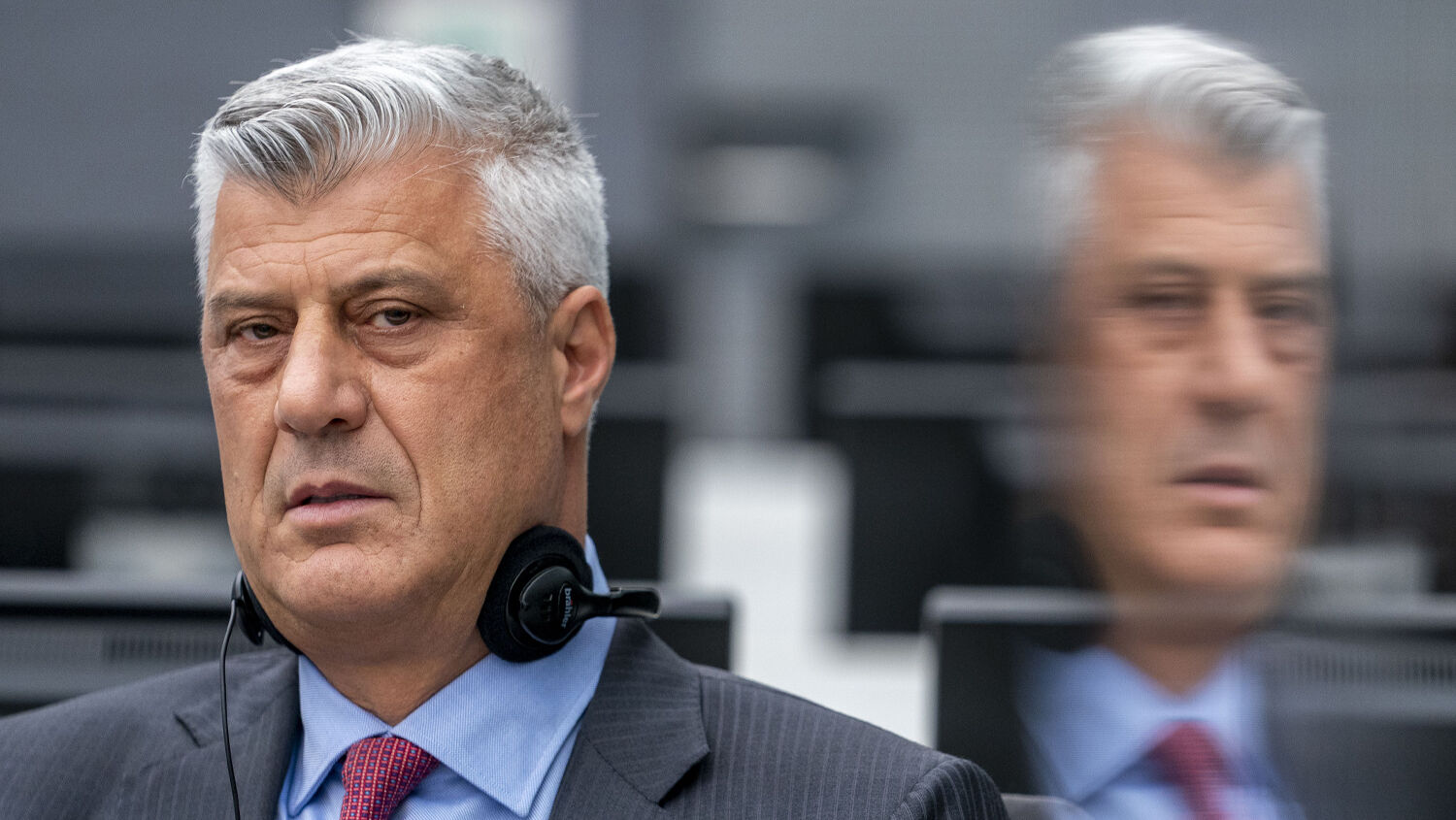 Former Kosovar President Hashim Thaçi sits before a war crimes court in The Hague on November 9 to face charges relating to the 1990s conflict with Serbia.
JERRY LAMPEN/POOL/AFP via Getty Images

A day of reckoning has come—but for which country?

On November 4, Kosovar President Hashim Thaçi was arrested and flown to The Hague to face indictments for war crimes and crimes against humanity committed during the Kosovo War of Independence (1998–1999), one of the various conflicts that were part of the collapse of Yugoslavia.

Hours before his flight to the Netherlands, Thaçi resigned as president in an effort to, in his own words, “protect the integrity of the presidency of Kosovo.”

During the war, Thaçi was the political leader and a military commander of the Kosovo Liberation Army (kla), an armed guerrilla group that held an uprising against the Yugoslav government under Serbian strongman Slobodan Milošević. Three other senior Kosovo politicians (Kadri Veseli, Rexhep Selimi and Jakup Krasniqi)—all of whom were either militarily or politically involved with the kla—also face indictment and have been sent to The Hague with Thaçi.

While Kosovo technically only gained independence from Serbia (Yugoslavia’s successor state) in 2008, the kla waged a successful guerrilla war against the Yugoslav authorities with the help of nato forces; Yugoslavia was pressured to withdraw its forces by nato in 1999 after the U.S.-led alliance launched airstrikes against Belgrade. Kosovo was then administered by the United Nations, nominally as part of Serbia but de facto as a separate region.

Over 100 charges have been brought against the four men. The charges mainly revolve around the group, as the leaders of the kla, overseeing the kidnapping, torture and murder of civilians. The report released by The Kosovo Specialist Chambers & Specialist Prosecutor’s Office specifically refers to many makeshift detention facilities set up during the war where civilians—including ethnic Serbs and ethnic Kosovo Albanians accused of collaborating with the Yugoslav authorities—were tortured.

Some examples listed in the report:

98. Between at least April 1998 and late July 1998, detainees at Jabllanicë/Jablanica, Gjakovë/Đakovica were provided inadequate food, water, sanitation and hygiene facilities, medical care, and/or bedding. Personal property of detainees was seized and never returned. Multiple kla members, including Lahi Brahimaj, routinely subjected detainees to severe beatings and psychological abuse. Detainees were hit all over their bodies with baseball bats, punched, kicked, [redacted], and/or threatened with death. They could hear and see the severe abuse of other detainees and, on at least one occasion, were ordered to kill one another. Detainees were interrogated about and accused of associating with Serbs or policemen, and of being spies and collaborators with the Serbian authorities. Detainees included persons of Roma, Serb, [redacted] ethnicities. …

104. Between at least November 1998 and March 1999, detainees at Llapashticë/Lapaštica, Podujevë/Podujevo were primarily held in a one-room, overcrowded stable with poor lighting and no heating. They were provided inadequate food, water, sanitation and hygiene facilities, medical care, and/or bedding. Multiple kla members routinely subjected detainees to severe beatings and psychological abuse. Detainees were hit all over their bodies with sticks, chains, ropes, and rifle butts, punched, kicked, electrocuted, and/or threatened with death. They could hear and see the severe abuse of other detainees and were forced to beat one another. Some detainees were forced to perform manual labor. Detainees were interrogated about and accused of associating with Serbs, being spies and collaborators with the Serbian authorities, or not supporting the kla. Detainees included ldk [Democratic League of Kosovo, a rival organization] members and supporters and persons of Serb ethnicity. …

144. On or about 26 July 1998, as Serb forces launched an offensive, certain kla members took approximately 30 detainees from Llapushnik/Lapušnik into the nearby Berishë/Beriša mountains and divided them into two groups. One group was untied and released, the detainees in the other group were shot and killed. The bodies of detainees [redacted] were subsequently exhumed and recovered from [redacted]. …

152. On or about 20 July 1998, a group of Serb detainees was transferred from detention in Drenoc/Drenovac to Malishevë/Mališevo. The group included persons who had surrendered to the kla in Opertusë/Opertuša and Reti/Retimlje. The group transferred also included [redacted]. On or about 26 or 27 July 1998, the Malishevë/Mališevo detention site was emptied and certain detainees were thereafter killed by kla members, including at a location near Volljakë/Volujak. Despite extensive publicity and repeated requests, family members were denied information regarding the fate of those who had been detained in Malishevë/Mališevo. The identities of known victims are listed in Schedule B.

War by definition involves the imprisonment and killing of people on the opposite side, and civilians with questionable loyalties are bound to get caught up in the conflict. But electrocution, the murder of surrendered combatants, and the torture of Kosovo Albanians who happen to have belonged to a different faction are well past the boundaries of what is considered “normal” warfare.

Even with the indictments—including crimes against fellow Albanians—many in Kosovo and in Albania still view the men’s legacy in a positive light. Albanian Prime Minister Edi Rama stated that Thaçi’s “absurd trial will eventually seal the purity of the kla and the inability to rewrite its history.”

Remember that this same organization was supported by nato and Western countries as “freedom fighters” fighting against the Yugoslav “bad guys.”

But who was ultimately responsible for the crisis in Kosovo in the 1990s? Ultimate blame cannot be placed on Thaçi, Milošević or nato. There is another player involved—one whose role in the Yugoslav Wars is often overlooked.

The Trumpet had a lot to say when the Yugoslav Wars were going on. Trumpet editor in chief Gerald Flurry put the blame for the war primarily on Germany.

He writes in his free booklet Germany’s Conquest of the Balkans:

Yugoslavia lost the states of Croatia and Slovenia because of Germany. … Germany recognized these breakaway republics and then supported them with troops and armaments. America (and almost the whole world) strongly opposed Germany’s undemocratic plans in the beginning. But the U.S. weakened and then even decided to support Germany in its war to control the Balkans! Europe and the United Nations meekly followed along. …

Still the Germans were not satisfied. In 1997, the Serbs saw Germany supporting a guerrilla army of Albanians. The guerrillas called themselves the Kosovo Liberation Army (kla)—though they were never freedom fighters. Many of the authorities likened them to the Mafia. A large majority of Kosovo’s population was Albanian. These Kosovo Albanians, along with Albania and Germany, supported the guerrilla army against the Serbs. …

There was also direct support of these guerrillas coming from Germany. There are some 600,000 Albanians in Germany. Many of the kla guerrillas left their families behind in Germany to fight against the Serbs in a civil war that the German-supported Albanians started. Is that German democracy, or German fascism?

Germany also gave financial support to the kla. According to bbc News, “In addition to money sent home to relatives [in Germany], Kosovo’s internationally unrecognized government-in-exile has been collecting a tax of 3 percent of earnings. Its prime minister, Bujar Bukoshi, who is based in Germany, has repeatedly denied that the money is used to buy arms—he says that it’s spent on running the health and education services” (Aug. 5, 1998). But should anybody have believed that?

The kla guerrillas didn’t just happen. They were essentially raised up and directly supported by Germany—the powerhouse of Europe.

This is the same group that the leader of which The Hague has just indicted for war crimes and crimes against humanity—crimes against their own people.

Not only did the Germans actively sponsor these “terrorists” (as Mr. Flurry refers to them), but they made claims that it was the Serbs who were committing crimes against humanity of the worst kind. Mr. Flurry continues:

Germany encouraged nato attacks with the strongest language. The German defense minister at the time, Rudolf Scharping, said in a March 1999 television interview on zdf that “genocide is starting.” His alarmist vocabulary caused many to think about genocide. It became common to hear that word being used in relation to Kosovo.

The Australian reported on April 1, 1999, “With thousands of refugees continuing to stream out of the war-torn province, German Defense Minister Rudolf Scharping claimed in Bonn last night that evidence had emerged of concentration camps being set up by Serb forces.”

People watched television and saw the streams of Albanian refugees. Then they were led to completely blame the Serbs. Most newscasters knew very little about Kosovo, yet spoke of “genocide”—the deliberate and systematic destruction of a race. Then came talk about “concentration camps.” Genocide and concentration camps—words introduced by the German defense minister.

We see today that most of those claims were built on a foundation of ignorance, deceit and lies.

Nobody is claiming that the Yugoslav army was entirely guilt-free during the Yugoslav Wars, but the fact remains that Germany was accusing the Serbs of genocide against Albanians and setting up concentration camps—accusations that generally were either outright falsehoods or gross exaggerations—while actively sponsoring an organization that was committing crimes against humanity, some of them against Serbs.

What Germany did in Yugoslavia was reminiscent of what the Nazis did to Czechoslovakia in the 1930s. Czechoslovakia had a large German minority in the region of the Sudetenland, which bordered Germany but, as the Czechoslovakian territories were part of the Austro-Hungarian Empire, were never part of it. Adolf Hitler claimed that the Germans there were being discriminated against by the Czechs and Slovaks and that the Sudetenland rightfully belonged to Germany. Britain and France, looking to avoid war with Hitler, pressured Czechoslovakia to give up the Sudetenland without resistance.

One may wonder if what Germany did in Yugoslavia was a harbinger of a larger conflict to come. But we don’t have to wonder; Mr. Flurry has definitely stated that Yugoslavia was “the first military victim of World War iii.”

He based his analysis on Bible prophecy, specifically scriptures like Isaiah 10:5-7, which speak of Germany’s ancestors, the Assyrians (request Germany and the Holy Roman Empire for proof), having it in their heart “to destroy and cut off nations not a few.” Revelation 13:1-8 also describe this German war machine, a military superpower that is seen as invincible (verse 4) with “power … given him over all kindreds, and tongues, and nations” (verse 7).

Germany’s Conquest of the Balkans explains it all. Request your free copy.