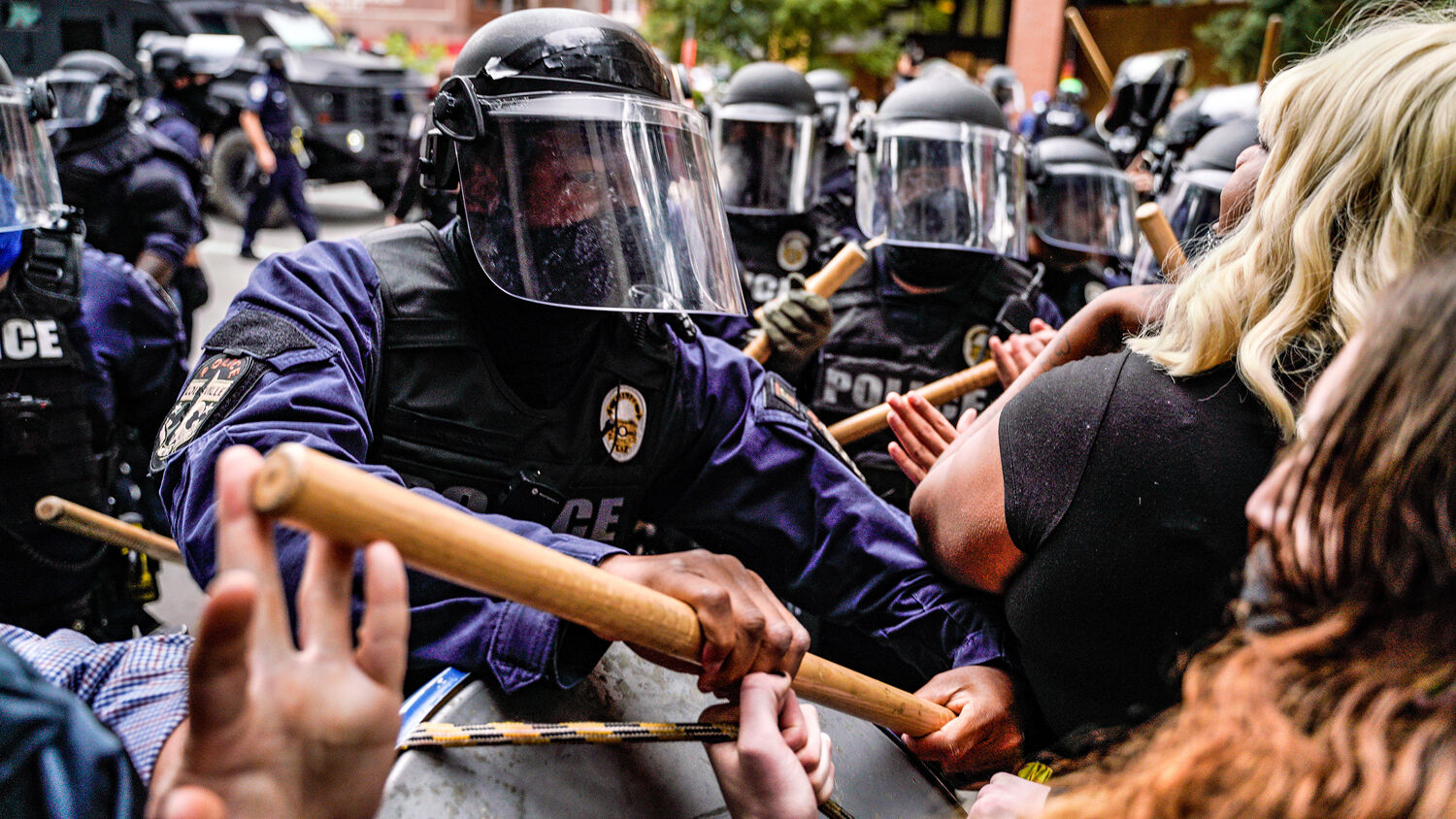 As the United States prepares for elections, many Americans are fearful—not just that their candidate may not win, but that their country may not survive the vote.

Fortitude Ranch, a chain of survivalist camps, has opened its premises in case of a “collapse disaster.”

“We consider the risk of violence that could escalate in irrational, unpredictable ways into widespread loss of law and order is real,” said ceo Drew Miller.

A YouGov poll found 52 percent of voters said they believe violence would increase after the election. The New York Post wrote about city residents preparing to move to the country to ensure they’re out of town for the vote and the potentially violent aftermath.

The threat of civil unrest and violence in America is rising; it’s no surprise people are taking precautions.

Other countries are getting ready too. But they’re not preparing for the worst. They see American unrest as an opportunity—and they want to make the most of it.

Extreme members of the radical left are openly planning violence if they don’t get their way in the election. Former presidential candidate Hillary Clinton said Democrats should not concede the election under any circumstances. A massive increase in postal voting has opened the door to a flood of court cases revolving around exactly which votes will be counted.

The potential for violence and chaos in a close election is clear. I’m not forecasting that this will happen. I think a clear, undisputable victory for President Donald Trump is a real possibility. But the divisions that threaten to explode into violence are not going away. If this election does not provide a trigger, something else well. The run-up to this election gives us an opportunity to see how other powers are preparing for an American collapse.

“A Distracted U.S. Is Dangerous for Taiwan,” wrote the Financial Times last week. Gideon Rachman wrote that “the din of the American campaign is drowning out increasingly aggressive words and actions by China, as it threatens to use military force to combat what it regards as intolerable ‘separatism’ by Taiwan, which is, de facto, an independent state, but claimed by Beijing.”

China’s military is encroaching on Taiwan’s airspace. The state media is warning, “The only way forward is for the mainland to fully prepare itself for war.” Rachman wrote, “Beijing’s window of opportunity could look even more tempting after the U.S. has voted on November 3—particularly if the election result is disputed and the country is plunged into a political and constitutional crisis.”

It’s not just China. If America is paralyzed by internal unrest, the world is full of powers eager to jump on that chance.

But perhaps most surprising is the way Europe is preparing. “What If Donald Trump Won’t Go? Europe Preparing for the Worst in Washington” is the title of a feature article from Der Spiegel, Europe’s largest newsmagazine.

Despite the fact it was Hillary Clinton who said the left should refuse to concede the election, and that it was the left who tried to overturn the results of the 2016 election by spying on the Trump campaign and pushing a fraudulent intelligence dossier, Der Spiegel is concerned President Trump may refuse to step down.

“What happens if Donald Trump simply refuses to leave the White House, even if he loses the election?” it asks. “Should that happen, the stability of democracy in the United States would be put to the test. It could even call into question the future of democracy as a form of government.”

European leaders are getting ready for such a scenario.

Peter Beyer, a member of German Chancellor Angela Merkel’s Christian Democratic Union (cdu) and coordinator of Transatlantic Cooperation at the German Foreign Office, warned, “We in Germany and Europe have to prepare.”

Martin Schirdewan, a leader for Germany’s Left Party, called on the European Union to send in election observers—the way it does in Third World countries with dubious democratic legitimacy.

Elmar Brok, one of the cdu’s most senior members of the European Parliament, gave a similar warning. “If it is blatant, the EU would have to quickly take a position,” he said. “It couldn’t act differently than it does in other instances.”

He’s saying that the EU should get ready to treat the U.S. the same way it treats countries like Belarus: refusing to recognize its leader as the legitimate head of state, imposing sanctions, etc.

The EU is getting on board with the same kind of rhetoric that the radical left uses, trying to delegitimize President Trump. Der Spiegel said German diplomats want to avoid, “at all costs,” taking any moves in the run-up to the election that boosts President Trump.

It isn’t hard to imagine a scenario where the right wins the election, but the mainstream media—which is almost entirely controlled by the left—claim the vote was stolen. Complicated court cases ensue, with the radical left claiming to the be the victors no matter what the courts ultimately rule. In this scenario, it would be easy to see the EU getting on board with the left, recognizing their candidate as the legitimate ruler. And all the while, Russia, China and Iran would be seizing their chance to act while America is paralyzed.

Again, I’m not saying this will happen as a result of this election. I think there’s plenty of evidence that it won’t—such a scenario would require a very close race. But look how eager some countries are to take advantage of America’s absence. And look how quick Europe—and especially Germany—is to involve itself in American politics. Whenever its chance comes, it will take it.

Here at the Trumpet we’ve been warning for decades of the danger of domestic violence in the United States. The Bible has very specific prophecies about the destruction this violence will cause.

But we’ve also warned that the most destructive aspect of that unrest will come from how other nations will respond. Trumpet editor in chief Gerald Flurry writes in his booklet Great Again:

The rioters and violent protesters may think they will come out of this as the victors, but God says no. Your enemies from without are going to exploit the division, violence and anarchy within your nation! There won’t be any winners from within the nation! That is what God is saying.

Bible prophecies make clear that even worse and more violent protests and riots are going to erupt in American (and British) cities. This will fatally weaken the nation and lead to curses of a far greater magnitude!

Isaiah 1 is directed against a “sinful nation, a people laden with iniquity, a seed of evildoers.” Its correction is aimed directly at the modern descendants of ancient Israel—the United States and Britain (for proof, read our free book The United States and Britain in Prophecy). God says, “Your country is desolate, your cities are burned with fire: your land, strangers devour it in your presence, and it is desolate, as overthrown by strangers.” God warns that America’s cities will burn. We see that already happening, but it will get worse unless we listen to Him.

If we do not, God says we will “be devoured with the sword.” It won’t just be domestic violence. Other nations will come in and attack from without.

Ezekiel 5 describes the same time period, saying that destruction comes on the modern nations of Israel a stage at a time. Destruction begins within the nation—people die in the middle of cities. Then other nations get involved; first, in the form of a siege, cutting America off from world trade. This makes the violence within the cities even worse. It’s easy to see comments, like the ones from Spiegel, leading to European leaders placing trade sanctions on America. As America gets weaker, the attacks on it grow stronger, and soon the nation is attacked militarily.

In his booklet America Under Attack, Mr Flurry writes:

We have been protected in America for a couple hundred years because we are recipients of the blessings God promised to faithful Abraham. We have not experienced the turmoil that many other nations have. Yes, we were involved in a civil war and two world wars, but God has given us victories and a lot of peace.

As a result, our people have kind of settled into an unreality about what is really happening around us. They don’t understand how deadly dangerous it is!

The reality is we live in a world where American power holds back a lot of bad people. Once that power slips, things will change very quickly. America won’t be allowed the leisure of working out its divisions in its own time.

To understand the reality of this world and where the riots are leading, read Chapter 5 of Great Again, “Where America’s Race Riots Are Leading.” It will explain where these riots are leading and why a loving God is allowing them.