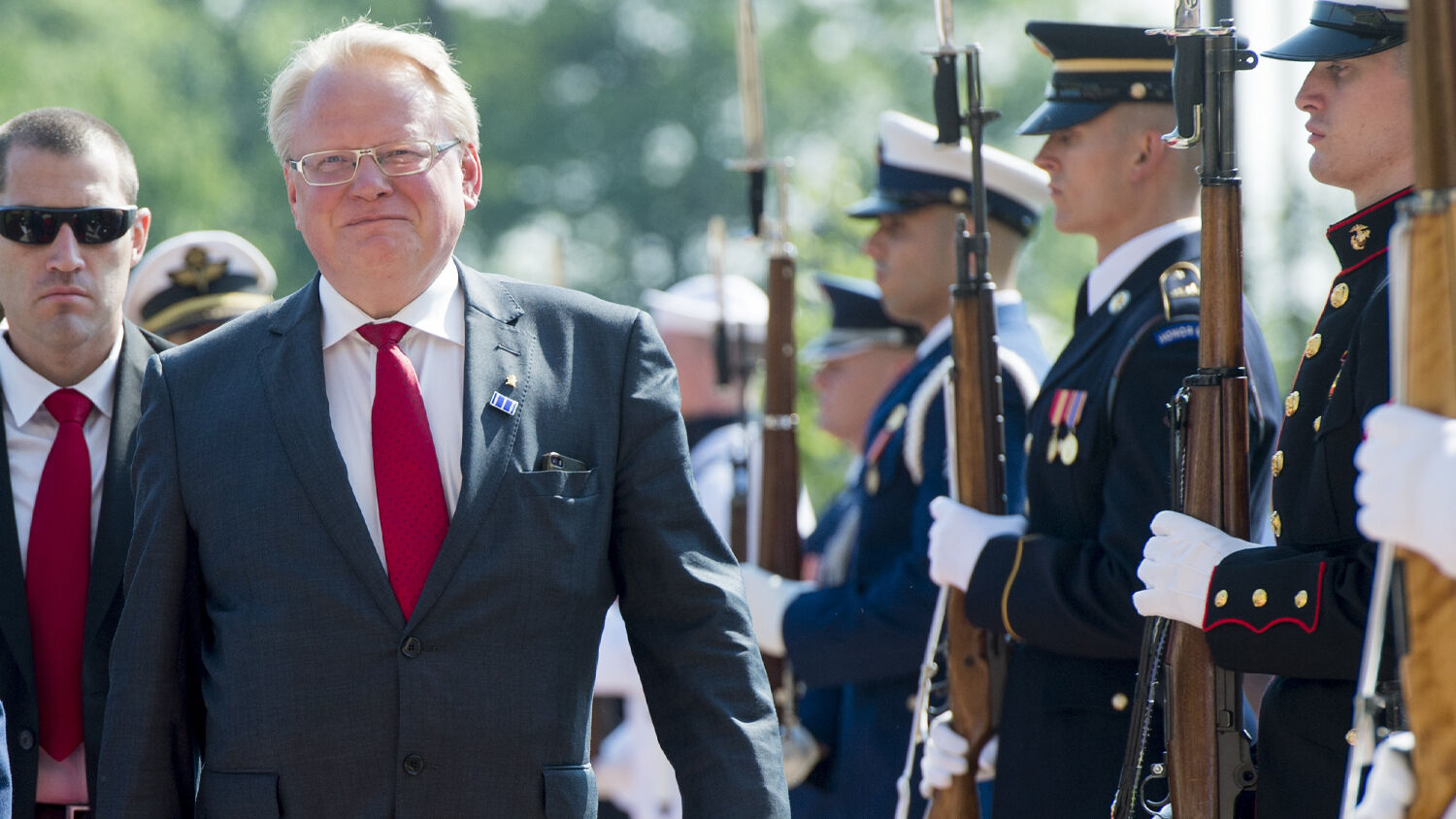 Swedish Defense Minister Peter Hultqvist walks past an honor guard as he arrives for a meeting of defense ministers of the Global Coalition to Counter isis at Joint Base Andrews in Maryland, July 20, 2016.
SAUL LOEB/AFP/Getty Images

‘An armed attack against Sweden cannot be ruled out.’

Swedish Defense Minister Peter Hultqvist introduced a historic defense bill on October 14, one that could represent the country’s largest military expansion in 70 years. It would increase military spending by 40 percent over the next five years in response to increasingly aggressive Russian behavior. Sweden is also looking to double the number of people conscripted into its armed forces.

Just last month, two Russian warships made unauthorized entry into Swedish waters. For years Russia has repeatedly violated Swedish airspace and has been increasingly pushy against its European doorstep.

The key event was the 2014 invasion of Crimea. Ever since Russia unilaterally seized this land, despite near global condemnation, other European countries have been nervous. Russia’s clearly ambitious leader President Vladimir Putin is not afraid to act imperialistically. Events like the poisoning of Putin’s main opposition leader Alexey Nalvany have served to only exacerbate concerns of Russian belligerence.

Therefore, Sweden is preparing to defend itself from becoming another Crimea. This bill “represents the largest increase in the level of ambition in defense capabilities in 70 years,” according to Hultqvist. “It is a signal to the Swedish people and our neighborhood that we are taking the security situation extremely seriously.”

“We have a situation where the Russian side is willing to use military means to achieve political goals,” he said. “Based on that, we have a new geopolitical situation to deal with.”

And so, Sweden is adding over $3 billion to its defense budget by 2025. Compulsory military conscription was abolished in 2010, but reintroduced in 2017. The new bill looks to double the number of armed forces to 90,000. New fighter jets are to be added to the air force, with longer ranges and better radar. The navy is slated to increase its number of submarines to five, as well as receive a new type of warship and air defense missiles. Sweden is even looking to reestablish five northern regiments to allow for strong military cooperation with neighbors Norway and Finland.

Sweden is nervous, and it is taking steps to strengthen itself. Having drastically reduced its military’s strength at the end of the Cold War, Russian aggression has necessitated militarization. How many more European countries could be pushed to act if Russia continues to behave aggressively?

What if Russia pounces on the current turmoil in Belarus and takes over, bringing it closer to Poland on Europe’s doorstep? What if it regains more of its former Soviet territories, taking advantage of the instability and increasing its strategic holdings in Armenia and Kyrgyzstan, as it did with Crimea?

Bible prophecy gives us the answer. In his 2004 article “Russia Frightens Europe—and Fulfills Bible Prophecy,” Trumpet editor in chief Gerald Flurry wrote: “Europe’s becoming very nervous [about Russia] gives us a flash of light into a terrifying Bible prophecy. It is building now—at this moment—to a spectacular fulfillment! All of these events in Russia and Europe are working out according to God’s master plan.”

Mr. Flurry explained: “That means the frightening news comes from the northeast. Look on any world map and see who is located northeast of Europe—Russia and China, which will soon unite.”

Europe’s collective fear will only increase. This fear will precipitate the fulfillment of significant Bible prophecies in our time. Please read “The Crimean Crisis Is Reshaping Europe” to gain the full picture of how Russia is influencing the prophetic landscape before our eyes.