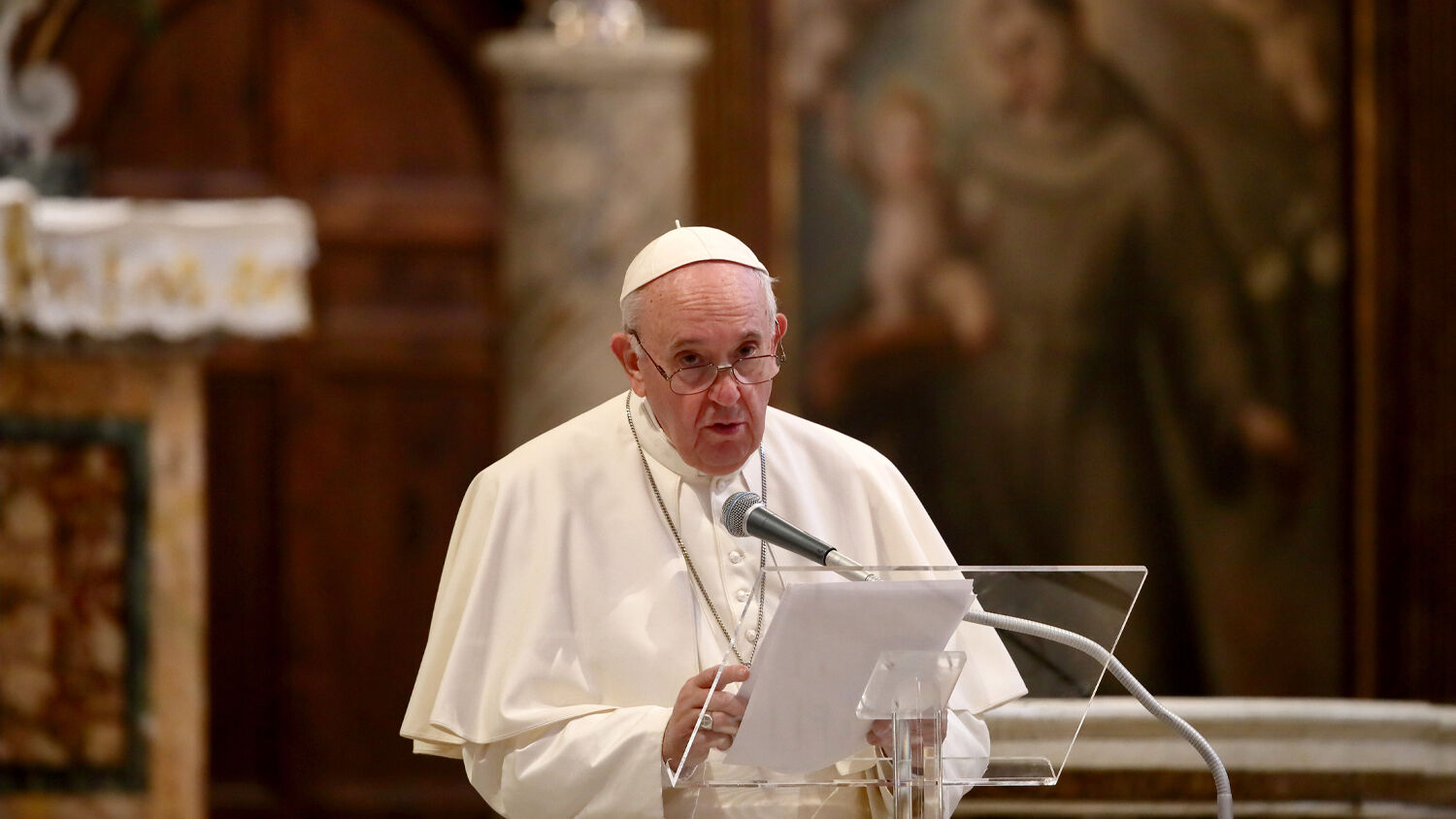 Pope Francis gives a speech during an International Prayer Meeting for Peace on October 20 at the Roman Basilica of Aracoeli.
Vatican Pool/Getty Images

The pope published one of his longest and most important letters on politics this month, and it is being seen as a direct intervention in the United States election.

Washington Post columnist E. J. Dionne Jr. called it “the pope’s unexpected election message.” “We are not accustomed to a hearing from a pope, a month before Election Day, who criticizes ‘myopic, extremist, resentful and aggressive nationalism,’ and castigates those who, through their actions, cast immigrants as ‘less worthy, less important, less human,’” he wrote.

Former Tablet editor Catherine Pepinster wrote in the Guardian that the encyclical’s “message means the pope has waded right into some of the key issues dominating the U.S. presidential election.”

She noted that “the Democrats may well be cheered” by much of what the pope wrote. “This clarion call from across the Atlantic could well be an election clincher,” she concluded.

Fratelli Tutti doesn’t mention U.S. politics. It’s the pope’s discussion on how all men can be brothers. Nevertheless, the document makes clear what he thinks about President Donald Trump—and even attacks the foundations of America’s political and economic systems.

Further evidence of the Pope’s views comes from the way he has treated both sides of the campaign. In September, when U.S. Secretary of State Mike Pompeo wanted to meet with the pope, he was denied. The Vatican said the pope wanted to avoid giving the impression he supported any particular candidate before the election. Yet he is apparently fine with publishing a document that strongly implies he supports the Democrats.

The encyclical’s political undertones have made some right-wing Catholics its biggest critics.

It strongly supports migrants, condemning “[c]ertain populist political regimes, as well as certain liberal economic approaches” that “maintain that an influx of migrants is to be prevented at all costs.” He singles out Latino immigration into the U.S. for praise, saying these people bring “values and possibilities that can greatly enrich the United States.”

The pope’s biggest criticism is of those who want to build walls. He warned that “those who raise walls will end up as slaves within the very walls they have built.”

But his criticisms go beyond Mr. Trump. They target the foundation of the American republic.

“Certain economically prosperous countries tend to be proposed as cultural models for less-developed countries,” writes the pope. It’s pretty clear which country he’s talking about. For other countries to copy the United States, he writes, would be a “shallow and pathetic desire to imitate others,” which “leads to copying and consuming in place of creating, and fosters low national self-esteem.”

Chapter 3 of the letter doesn’t specifically mention the U.S. Declaration of Independence or the Constitution. But it’s clearly a criticism of the foundations of American politics. It’s lengthy, and my summary will just hit the high spots—but it mirrors many criticisms raised by the American left.

Equality, the pope writes, is not “achieved by an abstract proclamation that ‘all men and women are equal.’” To proclaim that all are free, yet stand back and allow individuals to pursue happiness in their own way, is not enough, says the pope. This leads to “radical individualism,” which is “a virus that is extremely difficult to eliminate.”

“Some people are born into economically stable families, receive a fine education, grow up well nourished, or naturally possess great talent,” he writes. “They will certainly not need a proactive state; they need only claim their freedom.” Everyone else, though, needs something more “proactive.” How similar to former President Barack Obama’s complaint that the US Constitution “says what the states can’t do to you, says what the federal government can’t do to you, but it doesn’t say what the federal government or the state government must do on your behalf.”

The pope says a society cannot be built on the foundation of individual rights. The rights of the individual must instead be “harmoniously ordered to the greater good.” “Words like freedom, democracy or fraternity prove meaningless” unless “our economic and social system no longer produces even a single victim, a single person cast aside.”

To achieve this goal, the world must think about property differently. One of the pope’s subheads is “Re-envisaging the Social Role of Property.” Here he says that “the Christian tradition has never recognized the right to private property as absolute or inviolable, and has stressed the social purpose of all forms of private property. … The principle of the common use of created goods is the ‘first principle of the whole ethical and social order’” (here the pope is quoting from himself—as he does in much of this letter). He quotes various Catholic figures arguing that we do not own our property—it belongs to the poor.

My aim here is not to refute what the pope is saying; this idea that equal rights requires a “proactive” government to redistribute wealth has been refuted by British and American thinkers often over the last 200 or 300 years. And if you want to read what the Bible says about caring for the poor, you can read our article “The Welfare System That Works.” Instead, I want to point out the pope is preaching as doctrine a political and economic system completely at odds with America’s Constitution. The American way, he argues, is immoral. The world needs something else.

He is also critical of America’s role in the world. He talks about how the Holocaust must not be forgotten. Then in the next paragraph, he says, “Nor must we forget the atomic bombs dropped on Hiroshima and Nagasaki,” implying that America’s use of atomic weapons to end that war was a crime as evil as Nazi Germany’s murder of 6 million Jews.

The world needs a new political and economic system, the pope says. He calls for the reform of “the United Nations Organization, and likewise of economic institutions and international finance, so that the concept of the family of nations can acquire real teeth.” He repeats his earlier calls for a new global economy “more attentive to ethical principles, and new ways of regulating speculative financial practices.”

In the last presidential election, Trumpet editor in chief Gerald Flurry asked in the Trumpet magazine, “Why Is the Pope Meddling in American Politics?” That year, the pope visited the U.S.-Mexico border and declared, “A person who thinks only about building walls, wherever they may be, and not building bridges, is not Christian.”

“This pope is very politically minded, and he says so himself,” wrote Mr. Flurry. “Even as he spoke about Trump, the pope called himself a ‘political animal.’ Back in 2013, he said, ‘A good Catholic meddles in politics.’ He sees it as part of his religious duty.” He intervened against President Trump then, and he is doing so again.

The pope has called free-market capitalism “a new tyranny” and “the dung of the devil.” Mr. Flurry wrote that “this pope has made clear that he is staunchly opposed to some of America’s foundational ideals.” In this latest letter, Pope Francis made this clearer than ever.

Revelation 17:2 describes a woman “with whom the kings of the earth have committed fornication.” This is clearly speaking in symbolism. A woman is a type of a church (which you can also see in Ephesians 5 and Revelation 12). Revelation 17 describes a great and powerful false church, with political influence, involved with kings, presidents and elections. Mr. Flurry wrote:

Other biblical prophecies reveal that the United States is in grave danger! Believe it or not, Satan the devil is unleashing a multipronged attack on what has until recently been the most powerful single nation in history. He is working within the population by encouraging sin and perversion. He is turning factions within our people against one another, stirring hatred and violence that are tearing us apart. He is working from within the nation through leaders that are destroying America’s values and embracing lawlessness and corruption. At the same time, he is fomenting hatred among America’s enemies, empowering them to aggressively work against the nation’s interests.

In this encyclical, Pope Francis has revealed himself, more than ever before, as one of these enemies. The leader of the world’s largest organized religion has clearly set himself in opposition to the world’s greatest superpower—in the same way that the Catholic Church earlier worked against the Soviet Union.

His views are not shared by many U.S. Catholics. Polls suggest American Catholics favor President Trump over Joe Biden. I’m sure many other Catholics around the world also disagree with Pope Francis.

Nevertheless, the pope wields huge power, and the Bible says he will soon get even more. Revelation 17 says this woman leads and dominates a “beast”—a symbol in Bible prophecy of a major empire.

Already the pope is steering the world against America. Revelation 18 goes on to describe this beast power dominating the world’s economic system. The pope is one of the greatest critics of the current system—and events are leading to the time when that system will be replaced.

“The pope is making an extremely dangerous foray into American politics,” concluded Mr. Flurry in 2016. “Bible prophecy shows us how dangerous this institution is. When it makes a power play like this, we must sit up and pay attention, and recognize the seriousness of the times!”

The pope is making that foray once again. You need to understand what Bible prophecy says about it. Our free book The Holy Roman Empire in Prophecy will help prove to you what the Bible says about this organization. It will also show how this church fits into God’s overall plan for mankind—He is in control, and has been throughout history. So much of the what the Bible prophesies about this organization has already been fulfilled. This history also proves the reliability of the Bible and can boost your confidence that its hope-filled forecasts for the future are sure.