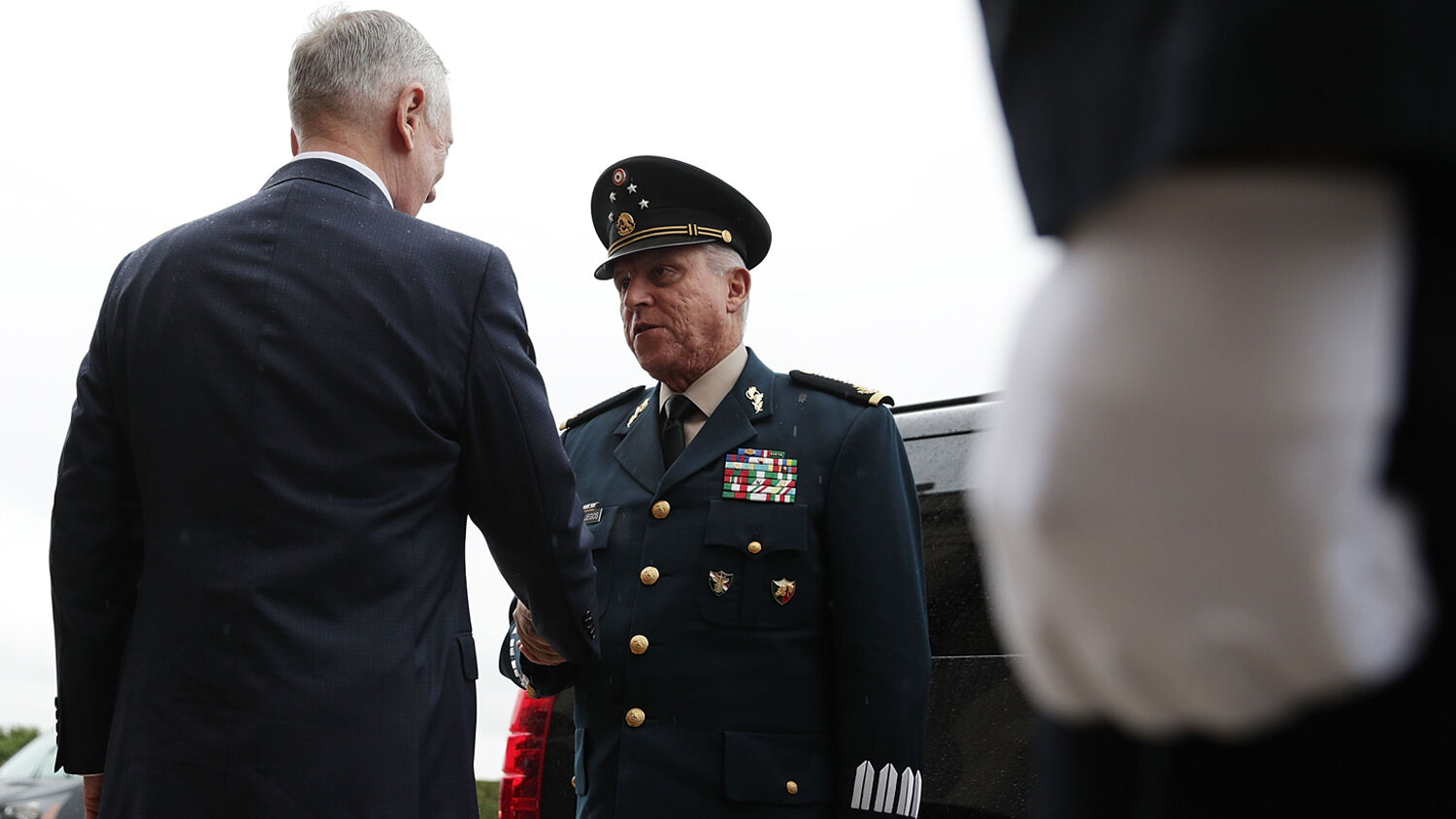 Gen. Salvador Cienfuegos Zepeda, Mexico’s former defense chief, was arrested October 15 by American law enforcement in Los Angeles International Airport as he was visiting the United States with his family. Cienfuegos was secretary of National Defense under the administration of former Mexican president Enrique Peña Nieto from 2012 to 2018. The charges against him include assisting in the trafficking of heroin, cocaine and methamphetamine marijuana, as well as money laundering and accepting bribes.

According to U.S. prosecutors, Cienfuegos has been identified as El Padrino (“The Godfather”), a mysterious high-ranking figure in the Mexican drug underworld that U.S. Drug Enforcement Agency (dea) has been hunting for some time. The dea had suspected that El Padrino was somebody deep in the Mexican military establishment.

Cienfuegos is the highest-ranking member of the Mexican military arrested for drug charges. He is accused of assisting the H-2 Cartel—a splinter group of the Beltran-Leyva Cartel, itself splintering from the infamous Sinaloa Cartel in 2008—by turning a blind eye to H-2 operations while directing his anti-drug war on their competition.

The Beltran-Leyva brothers ran one of the most powerful and infamous cartels in Mexico, and had a heavy presence in the Mexican border state of Sonora. All four of the brothers have been arrested or killed over the years, including Hector Beltran-Leyva, the original “H.” A man working under him, Juan Francisco Patrón Sánchez, nicknamed “H2,” took the lead of one of the cartel’s offshoot groups once “H” was arrested.

But while H2 was the leader of the cartel, American officials believed that El Padrino, whoever he was, was giving the group a lot of help from the shadows.

And now, it looks like Mexico’s drug “godfather” was the man in charge of combating the war on drugs in the first place.

In Mexico, unlike in other countries, it is the military rather than the civilian police in charge of combating drug groups. Considering the cartels are heavily armed and control entire sections of the country—more akin to autonomous militia groups than organized crime syndicates—one can’t really blame the Mexican government for relying on the armed forces.

This policing using the military started under the administration of President Felipe Calderón (2006–2012), who saw Mexico’s police force as inadequate to fight the cartels, if not in league with them outright. In 2008, Calderón and U.S. President George W. Bush agreed on the Merida Initiative, in which America would appropriate several billion dollars’ worth of funding to the Mexican government to combat the drug trade.

Since a law was passed in 2017 (when Cienfuegos was secretary of defense)—a law that constitutional scholar Dr. Alejandro Madrazo says “displaces the Constitution”—the Mexican military has acted with autonomy from the judiciary and congress to attack the cartels with little oversight apart from the defense secretary and president. This has led to human rights activists accusing Mexico’s military of “widespread human rights violations, including torture, extrajudicial killings and forced disappearances,” according to the Council on Foreign Relations.

Nevertheless, the fact that Mexico’s military is all that stands in the way of the cartels turning the country into complete anarchy means that the armed forces are extremely well respected by many Mexicans. Since the Mexican War on Drugs began in 2006, an estimated 150,000 to almost 300,000 Mexicans have died as a result of the conflict.

Last December, Genaro García Luna, the secretary of Public Security (Mexico’s equivalent of the Federal Bureau of Investigation), was arrested in Texas for accepting millions of dollars’ worth of bribes to turn a blind eye to the operations of the Sinaloa Cartel, formerly led by the infamous Joaquin “El Chapo” Guzman.

Both Cienfuegos and García were assigned to head the War on Drugs, and both were, in one way or another, assisting cartels even as America was setting aside billions of dollars for Mexico to fight the war on drugs. No wonder America wants both men in jail.

The National Center for Health Statistics reports that over 70,000 deaths were caused by drug overdoses in the U.S. in 2017. In the same year, according to an estimation by the Substance Abuse and Mental Health Services Administration, roughly 30.5 million people over the age of 12 used illegal drugs, with an estimated 2 million of those under age 18.

Over 90 percent of drugs that can potentially kill are brought into the U.S. through Mexico.

Should we really be surprised that corruption and drug money have made their way to some of the most influential leaders in Mexico when the drug industry is so lucrative? According to a report from the Department of Homeland Security during the Obama administration, drug cartels earned between $19 and $29 billion each year in America and send it back to Mexico. In 2016, Americans spent $150 billion on heroin, cocaine, methamphetamine and marijuana alone.

As horrible as the actions of people like Cienfuegos and García are, where do you think the millions of dollars they were bribed with came from?

The violence is all the worse because of the cartels’ weapons: tons of high-powered AK-47s, AR-15s and .50 caliber rifles. Oftentimes even the lowliest gangster has access to assault rifles, high-tech telescopes, infrared goggles, grenades, grenade launchers and high-caliber ammunition. According to stats released by both the U.S. and Mexican governments, 80 to 90 percent of the weapons used by Mexico’s drug cartels come from the U.S. Providing cartels with weapons is a multimillion-dollar racket, and U.S. residents are purchasing state-of-the-art weapons and selling them to the cartels, which then smuggle them into Mexico.

According to Mexican President Andrés Manuel López Obrador, as reported by Al Jazeera, even the U.S. Department of Homeland Security has sold weapons to cartels in order to trace them to the cartel bosses. While the dhs is doing this to capture mass murderers, one has to wonder how many people were mowed down by the same weapons—how many parents, wives and children were bereaved—before American law enforcement caught their “big fish.”

And the cartels are diversifying their operations in recent years: Human trafficking—much of it in the sex trade—has become the cartels’ third-biggest revenue generator, after drugs and weapons.

Some claim that the push in recent years to legalize recreational marijuana is the government’s way of combating the cartels. Marijuana is one of the major drugs the cartels export to Americans, and if the money is going into the coffers of the states rather than Sinaloa, the cartels are deprived of their funding.

But this actually has the opposite effect. With Canada, Washington, Colorado and others legalizing recreational marijuana, the cartels are losing revenue, so they’re increasing their production of hard drugs like heroin. The Council on Foreign Relations links this to the recent opioid epidemic cursing many American cities.

Mr. Macdonald continued in his article:

Meet Billy. He’s an American college student who likes to get together with his buddies and smoke a little weed, or on occasion, snort a little cocaine. Billy doesn’t go “overboard.” He never sells drugs, or steals cars, or robs the elderly to support his hobby. In his mind—and the minds of many Americans—his drug use is simple, cheap fun, and mostly harmless.

Truth is, Billy is an ignorant, selfish fool whose actions are killing people. Neither Billy nor the millions of Americans like him give any thought to the poor Mexican farmers forced at gunpoint to grow marijuana or poppy crops. Or the barbaric cartels that supply him with this dope. Or the wreckage these cartels are causing in Mexico: collapsed businesses, abandoned towns and cities, countless mothers who fear letting their children play in the front yard. Or the tens of thousands who have been killed, kidnapped or wounded in drug-related violence. Or the brave U.S. border agents doing battle with drug cartels.

Obsessed with his own gratification, Billy the American doesn’t realize he’s the cause of so many of Mexico’s dire problems.

This crisis exists because there are tens of millions of Billys in the U.S. About 119 million Americans have used an illicit substance at least once. That’s 47 percent of Americans over the age of 13. In its 2010 National Survey on Drug Use and Health, the U.S. Department of Health and Human Services discovered that roughly 22 million Americans over the age of 12 were regular drug users, meaning they’d consumed an illicit drug in the previous month.

We at the Trumpet have written a lot about the moral decline of Americans, and drug addiction is a huge part of the problem. But never mind how the drugs are harming American society; America’s addiction is sending billions of dollars to fund a never-ending war in a country on the verge of becoming a failed state.

To learn more about America’s moral decline and what it means for us today and in the near future, please request our free booklet by Trumpet editor in chief Gerald Flurry, Character in Crisis. This is one offer you can’t afford to refuse.