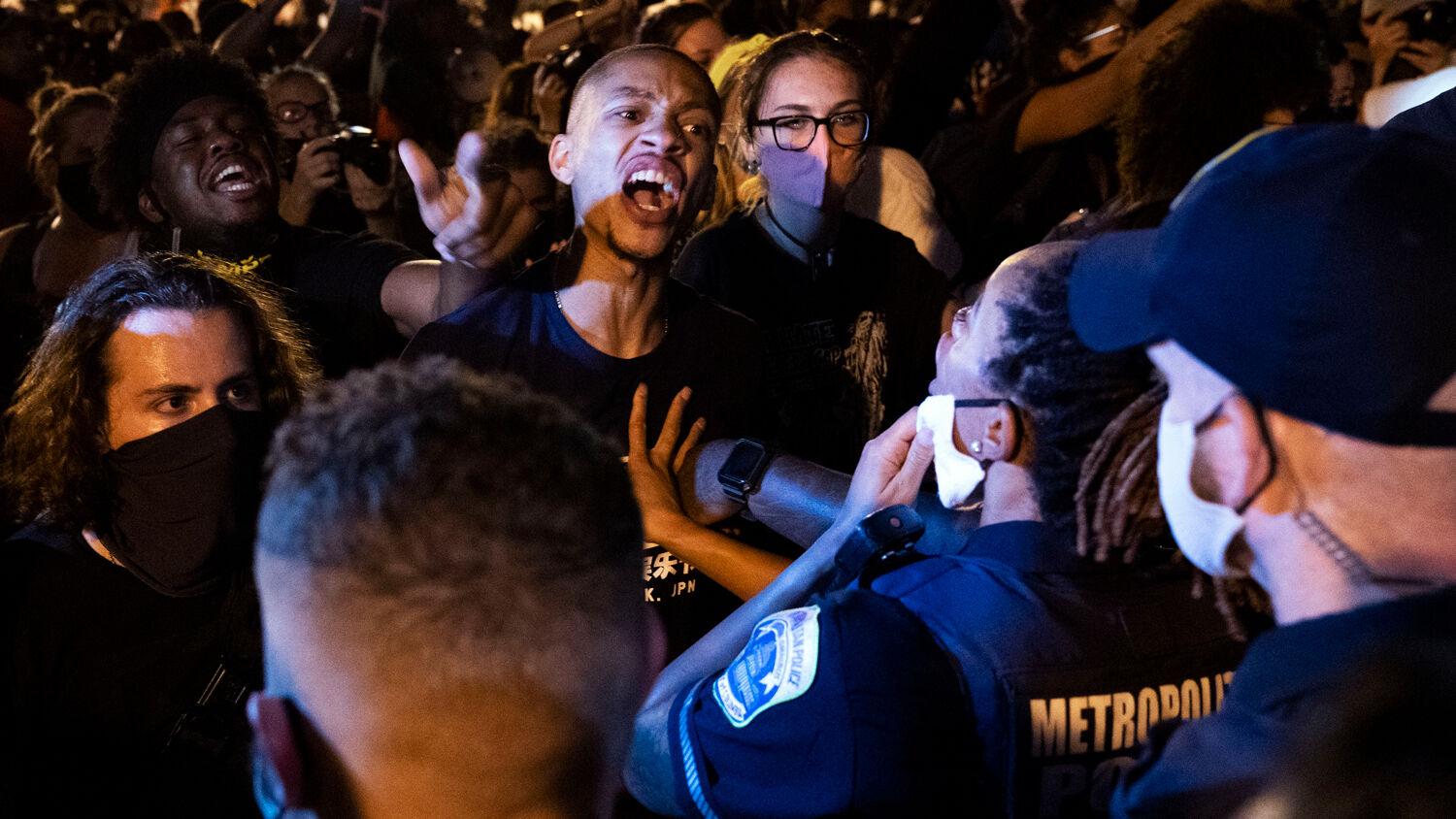 Demonstrators confront police officers during a protest near the White House on August 27, 2020 in Washington, DC.
JOSE LUIS MAGANA/AFP/Getty Images

Expect crime to increase as radicals tear down our last line of defense.

As rioters throw Molotov cocktails at police cars and politicians move to defund police departments, at least 118 officers have quit the Seattle Police Department this year. That is according to Seattle Police Officer Guild president Mike Solan, who was interviewed on the Jason Rantz Show on October 15. Seattle now has 1,200 officers on its force—the lowest number in a decade. And Seattle is not the only city with a shrinking police force.

The New York Police Department has also shrunk to its smallest size in 10 years. More than 2,385 New York police officers filed for retirement this year, compared to only 1,300 last year. “No one wants to come to work every day and be demoralized and vilified as they risk their lives to protect people,” nypd detective union head Paul DiGiacomo told cnn in July. “We are losing people who love this city, love the people of the city, love this agency.”

Reports of police officers quitting en masse have hit Asheville, North Carolina; Atlanta, Georgia; Chicago, Illinois; Denver, Colorado; and many other cities. And this wave of resignations is just the intensification of an already existing trend.

A large body of evidence finds that police have a substantial impact on crime rates, so the continued erosion of the police force could herald a new era of high crime. America was plagued by high crime in the 1980s and 1990s until Congress passed a crime bill in 1994 that approved federal funds for local police. This bill helped local police departments hire more officers, contributing to a reduction in violent crime across the nation. But now the number of police officers per person in America has fallen back to 1994 levels, and radical politicians are still calling for police departments to be defunded. These radical politicians are tearing down America’s last line of defense.

Once this last line of defense is gone, cities will burn.

In The United States and Britain in Prophecy, Herbert W. Armstrong explained how modern Britain and America descended from ancient Israel. The Bible records that in the time just before Jesus Christ’s return, sinful behavior among Israelites will lead to a violent revolution so devastating that no one will want to even try to solve the problems.

“And I will give children to be their princes, and babes shall rule over them. And the people shall be oppressed, every one by another, and every one by his neighbour: the child shall behave himself proudly against the ancient, and the base against the honourable. When a man shall take hold of his brother of the house of his father, saying, Thou hast clothing, be thou our ruler, and let this ruin be under thy hand: In that day shall he swear, saying, I will not be an healer; for in my house is neither bread nor clothing: make me not a ruler of the people. For Jerusalem is ruined, and Judah is fallen: because their tongue and their doings are against the Lord, to provoke the eyes of his glory” (Isaiah 3:4-8).

This passage describes a time in America when everyone is oppressed by his neighbor and youth rebel. The chapter describes a complete lack of leadership. God says He takes away “[t]he mighty man, and the man of war, the judge, and the prophet, and the prudent, and the ancient, The captain of fifty, and the honourable man, and the counsellor, and the cunning artificer, and the eloquent orator” (verses 2-3). Leadership is lacking at all levels of society. People look for a leader to solve the problems, but no one wants the job.

You see the spirit of this verse in the police. No one is willing to take a stand for law and order.

The Trump administration is attempting to fight back against the radical left’s lawless agenda. But President Donald Trump’s efforts to restore law and order to America will help for only so long before the nation has to address the root cause of the current crisis. Sinful behavior and upside-down families are creating anarchy. Isaiah 3 tells us this—much of the chapter addresses upside-down families. America’s current temporary revival is a chance to repent of the sins that have allowed so much corruption to seep into the nation’s government. But this window of time will not stay open long! Unless we use this time to address the causes of these problems, they will overwhelm us.

To understand what God wants Americans to learn from the protests and riots engulfing the nation, please read “Race Riots Were Prophesied!”, by Trumpet editor in chief Gerald Flurry.