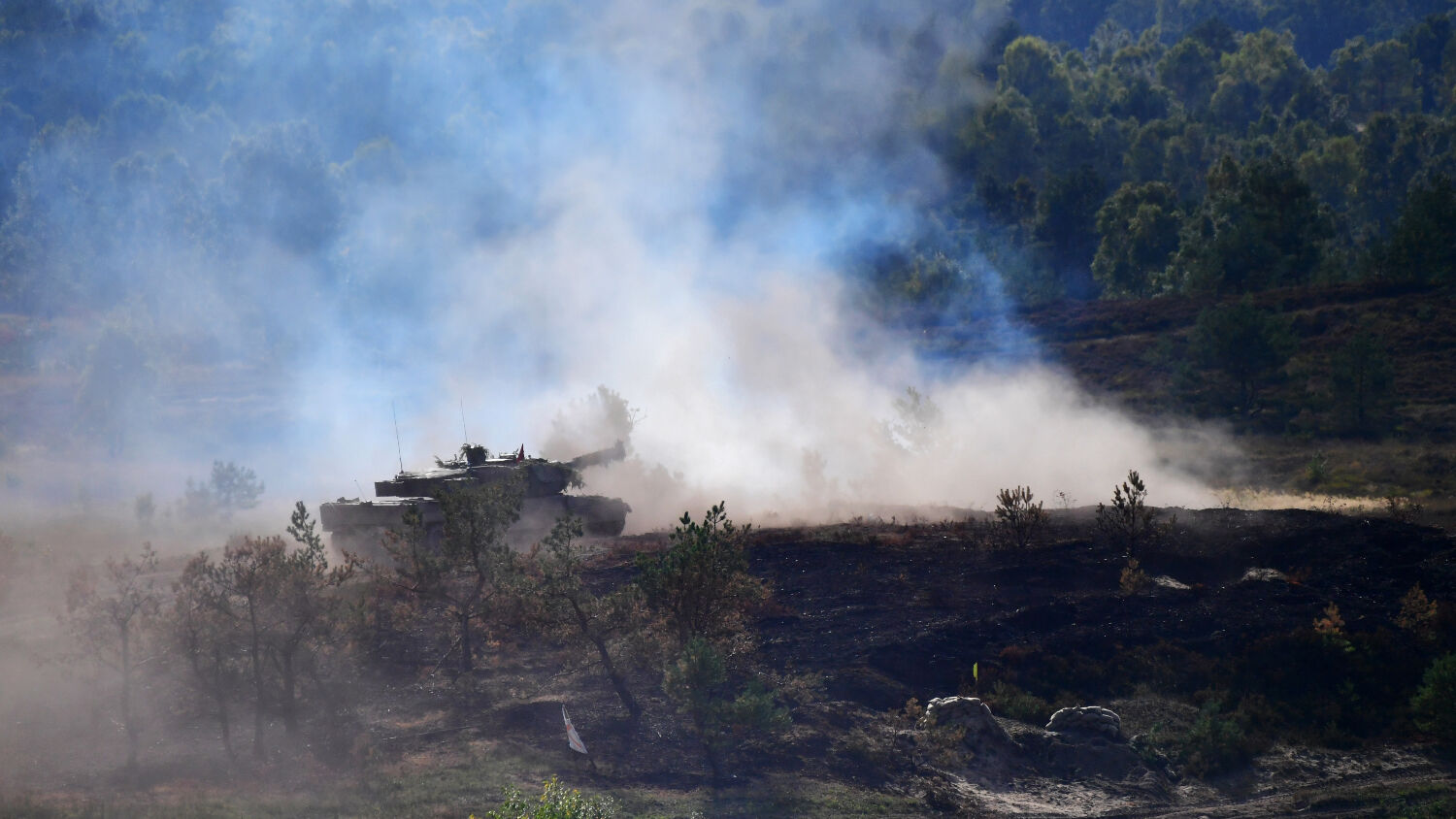 MUNSTER, GERMANY - SEPTEMBER 26: A Leopard 2A6 tank of the Bundeswehr participates in a three-day Bundeswehr exercise, which include Forces from Germany, Austria and the Netherlands.
Alexander Koerner/Getty Images

The German Army’s new main battle tank prepares the country for a new type of warfare.

The German Bundeswehr announced on its official YouTube channel on September 21 the first test of the upgraded Leopard 2A7V. The new main battle tank is designed to prepare the nation for new challenges in tank warfare.

Germany’s main battle tank (mbt) is currently the Leopard 2A6. This tank, or similar versions, is currently part of the armed forces of 16 countries. As of January 2018, more than 3,500 Leopard 2 tanks are in use around the world. Germany is now ready to upgrade its own stock. The National Interest reported on October 7:

The Leopard 2A7V is a modernized version of the Leopard 2A6, already considered one of the best mbts in the world. Introduced in 2001, the 2A6 version has been seen to even outperform the American M1A2 Abrams, British Challenger 2 and French Leclerc in terms of protection, firepower and mobility. The Leopard 2A6 has been adopted by the militaries of not only Germany, but also Canada, Finland, Greece, Portugal and Spain.

The 2A6 has been considered one of the most “traditional” upgrades and built upon the 2A5 upgrade—which introduced major changes to the turret design, including giving the mbt its distinctive “Wedge” turret.

Krauss-Maffei Wegmann designed and built the upgraded tank in cooperation with the Bundeswehr. The upgraded tank is meant to address the challenges of modern tank warfare, “including low-intensity conflicts but also urban warfare and conventional military operations,” noted the National Interest.

Similar to the 2A6 variant, the tank holds a crew of four, has a maximum road speed of approximately 42 miles per hour, and has a maximum range of approximately 341 miles. The mbt uses Rheinmetall’s 120-millimeter L/55 smoothbore tank gun, enabling it to fire Rheinmetall 120mm DM53 Armor-Piercing Fin-Stabilized Discarding Sabot—Tracer (apfsds-t) ammunition. It can also use a depleted uranium penetrator, giving it an additional combat range of 1 mile and greatly improved armor penetration.

Through exports, German weaponry has been tested around the world. The industry has been alerted to malfunctions in its equipment, allowing it to upgrade and perfect its weaponry in peacetime.

The Leopard 2A7 was first revealed in 2010. A new Leopard 3, built in close cooperation with France, is also planned. The French-German joint venture is called knds (kmw+Nexter Defense Systems), combining the names of both manufacturers. The end product is hoped to be the first European main battle tank (embt).

Germany’s goal is to produce the world’s most powerful tank.

The 2018 Eurosatory Daily reported on June 15 that “the embt demonstrates that their combined skills make it the legitimate and essential industrial actor of the two key French-German future programmers.” The tank combines the strength of Germany’s Leopard 2 and France’s Leclerc and is already seen as more powerful than either one individually. The new tank is lighter than the Leopard 2 and can be operated with only two crew members compared to the usual three. The lighter weight means it has the advantage of customizing up to six tons of additional equipment.

Stern reported on the coming embt on June 15, 2018: “The previous tank cannons from Rheinmetall used the caliber 120 millimeters. … The barrel length of the new weapon should be 51 times the caliber. The whole system with the shutter should weigh 3 tons, the pipe alone 1,400 kilograms. Overall, the performance will be 50 percent higher than that of the 120-millimeter cannon” (Trumpet translation throughout).

Germany is modernizing its army with great zeal and urgency. Though it may seem to be too small to be a threat, this could quickly change when Germany starts to cooperate more with other European nations. Notice what we wrote in “Forging a Superpower”:

Combining the strength of its arms industry with its civil industry, Germany could soon be mass-producing tanks and other military vehicles instead of cars. Incidentally, Europe’s great car and truck producers, Mercedes, Volvo, Renault, Volkswagen and man, are all involved to some degree in the production of military equipment and parts.

After World War i, Germany was left in a leadership crisis. But its industrialists were well prepared to facilitate Adolf Hitler’s military ambition.

The Bible prophecies that Germany will get a leader that will again turn Germany into a military power. “And in the latter time of their kingdom, when the transgressors are come to the full, a king of fierce countenance, and understanding dark sentences, shall stand up. And his power shall be mighty, but not by his own power: and he shall destroy wonderfully, and shall prosper, and practise, and shall destroy the mighty and the holy people” (Daniel 8:23-24).

In February 2011, Trumpet editor in chief Gerald Flurry wrote, “But here’s the most astounding and inspiring part of Revelation 17: God put it in the minds of Europe’s leaders to do what they’re doing!” He was referring to verse 17, which says, “For God hath put in their hearts to fulfil his will, and to agree, and give their kingdom unto the beast, until the words of God shall be fulfilled.”

Too many this may sound unfathomable, but Germany’s militarization is God’s will. It is God’s way of warning this world that war is coming. Through today’s world news and through the Trumpet, God calls on His people to repent from their sin to avoid the coming calamity. Sadly almost no one heeds the warning today, but many will turn to God in the coming prophesied Great Tribulation (Matthew 24).

Every day we see more clearly how evil our world is and how close we are to another war. It is imperative for you to understand where world events are leading and how God will intervene. Request a free copy of Daniel Unlocks Revelation, by Gerald Flurry, to learn God’s perspective of today’s news.