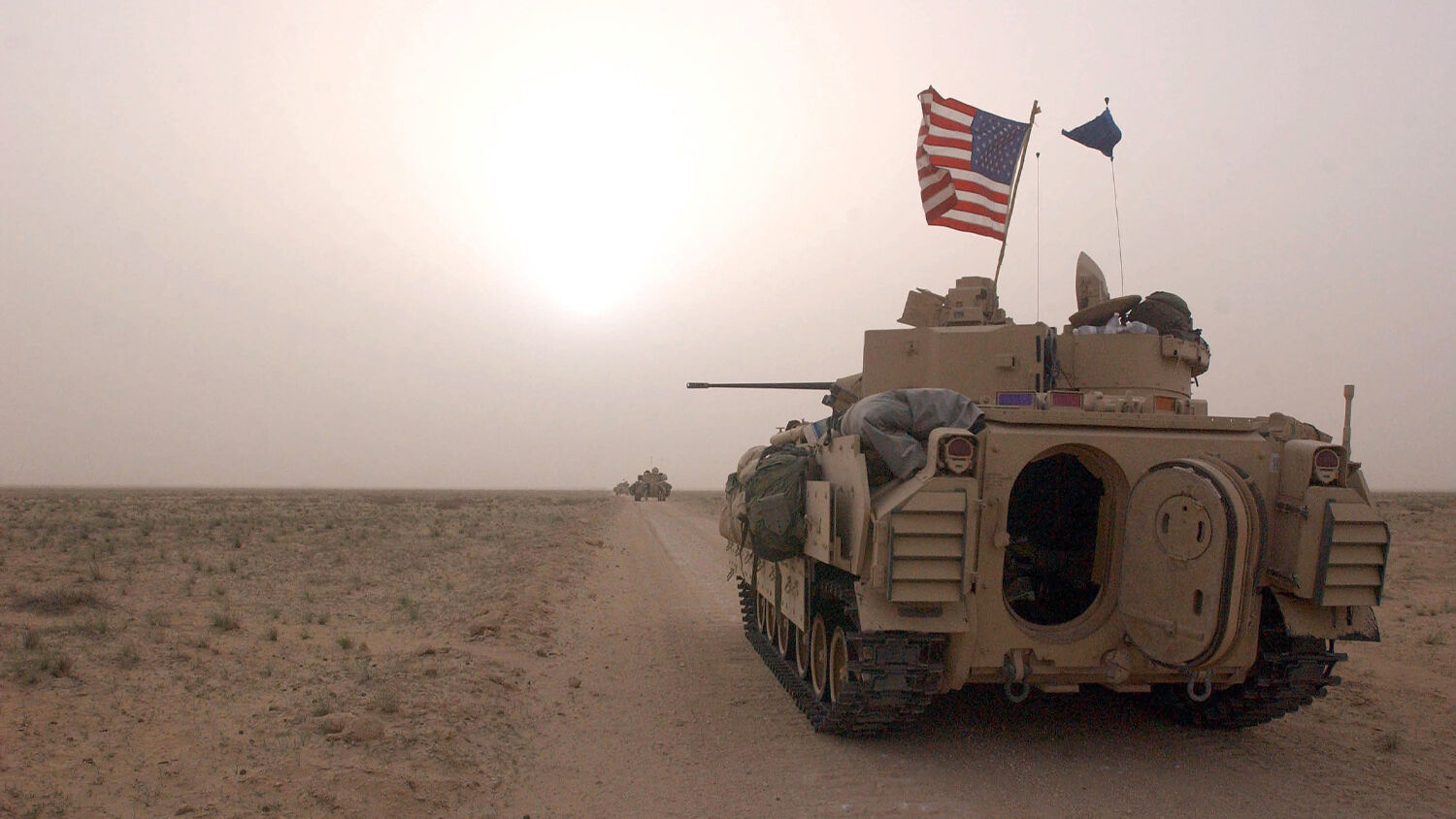 U.S. Army 3rd Division 3-7 Bradley fighting vehicles take up a position along a road inside the demilitarized zone between Kuwait and Iraq on March 19.
Scott Nelson/Getty Images

Has President Trump finally realized that it’s impossible to sever Iraq from Iran?

After almost two decades fighting in Iraq, America may finally be leaving the nation. And not just the troops, but everybody.

According to an Associated Press report on Tuesday, September 29, the Trump administration issued an ultimatum to the Iraqi government over the weekend: Prevent the frequent attacks on our soldiers, bases and convoys, or we will shut down and withdraw from our embassy in Iraq.

The United States Embassy in Baghdad, located inside the extra fortified green zone, is the largest diplomatic mission anywhere in the world. Such a retreat would mark not only the acknowledgment of the United States’ defeat in Iraq, but a monumental victory for Iran, whose Iraqi-based militias have carried out a proxy war against the U.S. since 2004.

It would also validate a landmark forecast by Trumpet editor in chief Gerald Flurry.

Since 1994, Mr. Flurry has warned of an Iranian takeover of Iraq. Conditions became riper for such a takeover in 2003, when the U.S. removed Saddam Hussein from power, Iran’s arch-enemy in the region. Following President Donald Trump’s declaration of victory against the Islamic State in 2018, Mr. Flurry wrote the following:

Since that statement, the United States has withdrawn from eight facilities or bases inside Iraq, consolidating its forces where they could be better protected from the incessant barrage of rocket fire.

The source of the attacks are some of the Iran-backed Iraqi militias that fought alongside the U.S. to oust the Islamic State, but then quickly filled the vacuum created by the terrorist group’s demise, as we clearly stated would happen at the time. Most U.S. forces have now withdrawn to the semi-independent Kurdish territory in northwestern Iraq, where the threat of attack is minimal.

Nevertheless, as the U.S. tries to maneuver away from a full-frontal confrontation elsewhere in Iraq, the low-level attacks have only increased over the past two months.

Understandably, the United States is frustrated that the Iraqi government is failing to investigate and prosecute the Iran-backed groups responsible for the attacks. Which is the reason for the U.S.’s ultimatum.

The Associated Press claimed that U.S. Secretary of State Mike Pompeo delivered the message of potential withdrawal to Iraqi Prime Minister Mustafa al Kadhimi on Saturday, September 26, and was confirmed by Iraqi sources. Reportedly, Pompeo said there would be potential military action against the militias corresponding with the embassy withdrawal. Two other Western diplomats confirmed to Associated Press they understood that the U.S. has already started the drawdown of the embassy. However, the United States Embassy declined to comment.

But there is other evidence of the United States’ ultimatum.

Last week, the U.S. issued a brief waiver to Iraq on Iranian natural gas imports before Iraq will be targeted by U.S. financial sanctions. Normally, the U.S. issues a six-month waiver. This time, Iraq was given only two months. Reuters claimed that Iraqi officials are under the impression that they have two months to reign in the militias’ attacks or face the full shutdown of the embassy.

There are no easy choices for the Iraqi government or the United States.

The Iraqi prime minister is trying to walk a tightrope between the U.S. and Iran. A full American withdrawal will mean that the U.S. believes Iraq is beyond saving and that it has fallen irredeemably into Iran’s hold. Iraq would likely then suffer similar financial sanctions to those against Iran. But to bring the Iran-backed militias to justice for their attacks against the United States, Kadhimi would likely face revolution within his own ranks.

But President Trump faces a tough choice as well.

It’s likely his gut feeling is that it’s time to fully get out of Iraq. Maintaining a diplomatic mission in Iraq only perpetuates the charade that it is able to act independently from Iran. However, leaving Iraq would signal victory to Iran. It would be celebrated in Tehran that after almost two decades of fighting, the U.S. has finally been run out of town by its Islamic revolution. This would be a bitter pill to swallow for the families of fallen American servicemen in the country and demoralizing for the military as a whole.

This predicament paints a dark picture for freedom-loving Iraqis who resent Iranian entrenchment in their nation, just as much as it does for the comrades and families of fallen allied servicemen who died on Iraqi soil in order to give that nation freedom and preserve peace in the Middle East.

Nevertheless, it is a reality.

The only hope in such a picture is found in acknowledging that this outcome was forecast by Mr. Flurry in the Trumpet magazine over three decades ago. And, importantly, that forecast was made possible through an understanding of biblical prophecy.

Based on an end-time prophecy in the biblical book of Daniel, Mr. Flurry was able to show how Iraq would fall under the power of the Iranian regime. He explains this prophecy in detail in his booklet The King of the South (you can receive a free copy of the booklet here). Daniel’s prophecy also reveals that Iran’s rise to power to dominate the Middle East will be short-lived, overwhelmingly crushed by a rising powerhouse in Europe in alliance with other Middle Eastern nations.

As the United States prepares to hand over Iraq to Iran, it’s time to recognize that we are living in the end time, a time when God is intensely intervening in world affairs. The major geopolitical events, such as the rise of Iran, the quickly forming anti-Iranian alliance of moderate Arab states, and their illusion of peace with Israel, as well as the temporary resurgence of the United States under President Trump, are all prophesied in the Bible. These current trends all point to the greatest culminating event—the soon-coming return of Jesus Christ. As hard as it may be to believe, these events in Iraq will lead to the coming of the Messiah. Please order your free copy of The King of the South to see how Iran’s power in Iraq is leading to that hope-filled event.