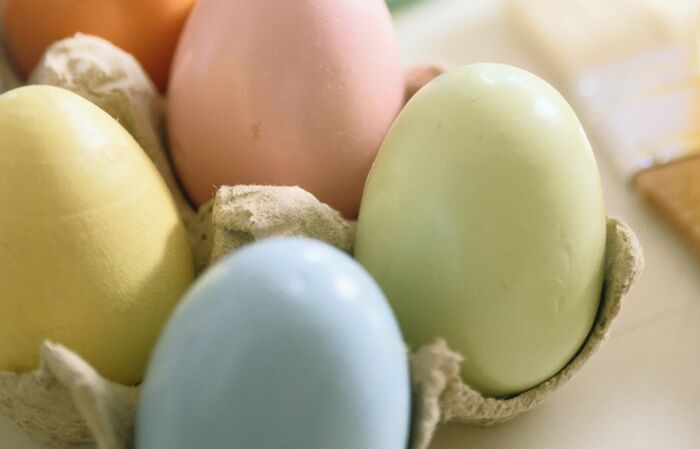 Every year, millions of Christians observe Easter to memorialize the resurrection of Jesus Christ. The Easter service—considered the most sacred observance of the year—focuses the Christian community on the miracle of His resurrection much like Christmas focuses it on His birth.

But on a day that is considered so sacred, people worship with bunny rabbits, hot cross buns and colored eggs. What do these things have to do with worshiping Jesus Christ or commemorating His resurrection?

Moreover, why didn’t anyone observe Easter in the Bible? Why didn’t Jesus Christ leave instructions regarding its observance? If you keep Easter, do you understand why you do?

By studying the origins of Easter and the scriptures related to it, we can find God’s instruction on Easter observance.

The Origins of Easter

Notice this frank admission from the Catholic Encyclopedia’s article on Easter: “[Easter] is also the oldest feast of the Christian Church, as old as Christianity, the connecting link between the Old and New Testaments. That the apostolic fathers do not mention it and that we first hear of it principally through the Controversy of the Quartodecimans are purely accidental” (emphasis ours throughout).

That’s right: The word Easter is never even mentioned in the Bible. Although “Easter” is found once in the King James translation, scholars today agree that the Greek word translated “Easter” (pascha) in Acts 12:4 should be translated “Passover.” In his commentary, Adam Clarke says about this word, “Perhaps there never was a more unhappy, not to say absurd, translation than that in our text.”

In order to really understand why Christians observe an Easter sunrise service, we need to know where it came from. “The English term [Easter] … relates to Estre, a Teutonic goddess of the rising light of day and spring …” (“Easter,” Catholic Encyclopedia). The Babylonian name for this goddess was Ishtar. The Phoenician name was Astarte, the wife of the sun god, Baal, the worship of whom is continually denounced in the Bible as the most abominable of all pagan idolatry (1 Kings 22:53; Jeremiah 32:35).

This goddess is actually ancient Semiramis, the mother and wife of Nimrod, the mighty warrior who rebelled against God (Genesis 10:8-9; before should be translated against—Strong’s Concordance). They were the founders and inspiration behind the pagan religion of ancient Babylon. Since she claimed to be the wife of the “sun god,” Semiramis became widely known as the “queen of heaven.”

This brings us to the first scripture relating to Easter observance: “Do you not see what they are doing in the cities of Judah and in the streets of Jerusalem? The children gather wood, the fathers kindle fire, and the women knead dough, to make cakes for the queen of heaven; and they pour out drink offerings to other gods, to provoke me to anger. Is it I whom they provoke? says the Lord. Is it not themselves, to their own confusion?” (Jeremiah 7:17-19; Revised Standard Version). This observance is about worshiping the queen of heaven!

The other relevant scripture is found in Ezekiel: “And he brought me into the inner court of the house of the Lord; and behold, at the door of the temple of the Lord, between the porch and the altar, were about twenty-five men, with their backs to the temple of the Lord, and their faces toward the east, worshiping the sun toward the east. Then he said to me, ‘Have you seen this, O son of man? Is it too slight a thing for the house of Judah to commit the abominations which they commit here, that they should fill the land with violence, and provoke me further to anger? …’” (Ezekiel 8:16-17; rsv).

Though this scripture refers to a time centuries before Christ, a little research shows that this is the identical thing that millions of Christians do every Easter Sunday today—stand with their faces toward the east, as the sun is rising, in a service of worship. This practice traces its origin back to the worship of the Babylonian sun god and his mythical wife, the true goddess of Easter. As Ezekiel writes, the observance of this service provokes God to anger!

It has nothing to do with Christ; rather, it is about worshiping the gods of Babylon. How, then, did Easter become part of traditional Christianity?

We showed earlier how the Catholic Encyclopedia states that Easter is first mentioned in connection with the “controversy of the Quartodecimans,” so let’s see exactly what that is. “Ecclesiastical history preserves the memory of three distinct phases of the dispute regarding the proper time of observing Easter. …

“A letter of St. Irenaeus … shows that the diversity of practice regarding Easter had existed at least from the time of Pope Sixtus (c. 120). Further, Irenaeus states that St. Polycarp, who, like the other Asiatics, kept Easter on the 14th day of the moon [Passover], whatever day of the week that might be, following therein the tradition which he claimed to have derived from St. John the apostle, came to Rome c. 150 about this very question, but could not be persuaded by Pope Anicetus to relinquish his Quartodeciman observance [on the 14th day of the month]. …

“The second stage in the Easter controversy centers round the Council of Nicaea (a.d. 325)” (“Easter Controversy,” ibid.).

Do you understand the significance of this history? Passover, observed annually on the 14th day of the month of Nisan, was observed by all the early Christians. About 100 years after Christ’s death, Pope Sixtus of Rome began making the switch to Easter Sunday, while Polycarp—appointed bishop of the Church of Smyrna by the apostles who had been personally instructed by Jesus Christ—continued to keep Passover just as the Apostle John had taught him.

A controversy calling for the annual Sunday observance of “Easter” continued for almost 200 years, until Easter was officially adopted by the church at Rome at the time of Constantine in a.d. 325. The decision of the Council of Nicaea in that year was unanimous; Easter was to be kept on the same Sunday throughout the world, and that “none hereafter should follow the blindness of the Jews” in keeping Passover. This decision was not based upon scriptural grounds but upon the personal preferences of the church leaders at that time.

Those few who continued to keep the Passover on the 14th day, according to biblical commands, were named “Quartodecimani” and were forced to separate themselves from the unity of that church backed by the Roman Emperor Constantine. As a result, the politically backed church at Rome grew to great size and power by adopting the popular Easter practice centered on Sunday worship, while those who practiced the teachings and examples of Jesus Christ and the early apostles were destined to become persecuted outcasts.

So how do colored eggs and hot cross buns fit into this pagan festival adopted by the Catholic Church?

Dyed Easter eggs figured in the ancient Babylonian mystery rites. They were sacred to many ancient civilizations. According to James Bonwick, “The mystic egg of Babylon, hatching the Venus Ishtar, fell from heaven to the Euphrates. Dyed eggs were sacred Easter offerings in Egypt, as they are still in China and Europe. Easter, or spring, was the season of birth, terrestrial and celestial” (Egyptian Belief and Modern Thought).

Classic poets relate the myth this way: “An egg of wondrous size is said to have fallen from heaven into the river Euphrates. The fishes rolled it to the bank, where the doves having settled upon it, and hatched it, out came Venus, who afterward was called the Syrian goddess.” This Syrian goddess, according to Alexander Hislop, was Astarte. “Hence the egg became one of the symbols of Astarte or Easter …” (The Two Babylons).

Though many consider this use of Easter eggs child’s play in modern times, its origins are pagan.

Hot cross buns, tied directly to the Easter season today, also have pagan origins. “These cakes, which are now solely associated with the Christian Good Friday,” according to the Encyclopedia Britannica (11th edition), “are traceable to the remotest period of pagan history. Cakes were offered by ancient Egyptians to their moon-goddess …. The Greeks offered such sacred cakes to Astarte and other divinities. … In time the Greeks marked these cakes with a cross, possibly an allusion to the four quarters of the moon, or more probably to facilitate the distribution of the sacred bread which was eaten by the worshipers.”

Few have ever realized the facts of where these practices originated. “In the medieval church, buns made from the dough for the consecrated host were distributed to the communicants after mass on Easter Sunday. … In England there seems to have early been a disposition on the part of the bakers to imitate the church, and they did a good trade in buns and cakes stamped with a cross, for as far back as 1252 the practice was forbidden by royal proclamation; but this seems to have had little effect. With the rise of Protestantism the cross bun lost its sacrosanct nature, and became a mere eatable associated for no particular reason with Good Friday” (ibid.).

It is a simple matter to prove that Easter and the customs surrounding it are of pagan origin. Observing that holiday provokes God to anger (Ezekiel 8:17).

Since we can see what God does not want us to observe, what does the Bible say we should commemorate at this time of year?

The Apostle Paul wrote about Jesus Christ’s command to the disciples just before His death: “For I have received of the Lord that which also I delivered unto you, That the Lord Jesus the same night in which he was betrayed took bread: And when he had given thanks, he brake it, and said, Take, eat: this is my body, which is broken for you: this do in remembrance of me. After the same manner also he took the cup, when he had supped, saying, This cup is the new testament in my blood: this do ye, as oft as ye drink it, in remembrance of me. For as often as ye eat this bread, and drink this cup, ye do shew [memorialize] the Lord’s death till he come” (1 Corinthians 11:23-26). These verses describe how to keep the New Testament Passover.

Many focus on the birth of Jesus Christ; many focus on His resurrection. But God requires all true believers to commemorate His death. Few follow this command. Instead, the masses observe festivals that are steeped in paganism. How about you?